Just some feedback for @thephoenixlodge


Right now I think the pack suffers from not leading the player through some of the other mods earlier in the game progression, or giving them a sense of direction. Now that I've played it for a while it's become apparent that the experience can be boiled down to squaring off a 5x5 chunk area of the overworld and having nothing but 7x7 farm plots on it and then drinking a cup of coffee while reading reddit. Sure, Botania is available fairly early on to a degree, but Botania is also a very passive mod and not very complex, particularly when compared to Blood Magic and Witchery. I'm not going to say they're "better", but they definitely do have more things to do in them.

I do think that you have the right idea about having a central progression, even if it's tied to crops (and lets be honest, crops are way over powered), but the progression is only linked to Botania really. I personally would be more engaged if every "tier" of crop progression was tied to some activities in some of the other mods, even if you want to restrict certain aspects of them. For instance, you could make repeatable quests that give resources above whatever tier of crops you have in order to build some structures from some of the other mods (like say a Witchery Distillery or a Blood Magic altar) that then allows you to produce items that you turn in (repeatable again) for the essences you need to unlock the crops. Like for instance, "sacrificing" a stack of Pumpkins and some bales of hay could give the player a Witches Oven (or even better, allow them to select a part of the ovens' materials), which in turn allows them to capture fumes that they need to turn in to get essences that they can use on the Botania Ritual stone to get a seed to grow a specific magical crop.

There are a couple of minor rituals that do include some aspect of needing something basic for a specific seed (I believe Whiff of Magic is in one, or some other fume) but they're pretty few and far inbetween. Mostly it seems like I grow shit, turn it into Botania, which in turn gives me more shit to grow, rinse/repeat. The most exciting thing I've had to do to continue the Crops/Botania cycle so far was make a TC Cleaver with Looting 3 on it so that I could get a creeper heart. I went completely excessive on it because I was bored and made it out of Pig Iron because I like getting Bacon. Yes, that was a lot of mobs that I fed into the smeltery.

Honestly, I think your pack is pretty good. It plays a lot like a skyblock, but the issue for me is that the "preamble" if you will, takes up too much time and that often the direction other than "rank up your infusion stone" is completely unclear. It gets kinda boring, especially once you realize that you don't actually NEED to 10/10/10 your crops in order to do this. I'm still debating on if it's faster/better to use floral fertilizer to gather botania flowers for the essence turn ins or if it's better to cross breed flowers (which you can do stupidly fast if you take a few minutes to set up a simple mob farm), but easily the best way to play the "early game" is to make a Rod of the Lands and just dirt-up a huge 5x5 chunk for mass crops. The most time consuming thing is probably just chopping down jungle trees for the lumber you need for all the crop sticks and the rest of it is shoving produce into composters in order to make garden soil (I think I had 5 running this last time)

Anyway, despite what must seem like mostly negative criticism, I do overall like the modpack. However, when I personally make something (like say some code) I'd rather know what the users both didn't want and want more of, than hearing them go "Oh this is fine!" So to that end

Sooooooooooo, how the Hell am I supposed to get Aluminum for my Smeltery?!
M

Rodger said:
Has anyone else tried tree breeding? I've got 5 bee houses running fairly often next to an oak and a birch, but haven't had any crossbreeding yet, after many hours. Do they have to be forestry saplings to start with now, instead of being able to mutate from vanilla leaves?


I've done that a few times, but haven't lost any seeds...
Click to expand...

JimmyJam said:
Any tips on getting wool of bat? Other than spending hours looking for them in caves... :/
Click to expand...

You can get it from the fire bats in the nether, which seem somewhat common and have the courtesy to fly right up to you.
Reactions: hiharryII, fimbrethil and JimmyJam
D

Eyrion said:
Sooooooooooo, how the Hell am I supposed to get Aluminum for my Smeltery?!
Click to expand...

One of the quests gives you bauxite that you can smelt.
T

1. It kinda has to be that way, unless you expect me to just hand out resources and break the whole concept of the gated progression that drives the pack.
2. This is a case of RTFM, the first Witchery Quest outright says that the witchery quests are split between changes and teaches.
3. This is due to the fact that there are two ways that you'll potentially get resources for the first time - Crops and Nether Ores. If I have it requiring the essence or the nether ores then the person who isn't the way the quests expect gets shafted and won't have the quests for things needing that resource unlock. In the past the seed quests were directly required rather than these trigger quests - this caused both the issue mentioned above, and also caused a lot of lag further into the quest book due to the huge number of nested progressive requirements a quest could have, hence the change.
4. There are few instances of this ever being a problem, but as far as I'm aware it only occurs with players choosing to advance through witchery without following the quests and making the books - See point 2.
5. 90% of the time people will have gotten gold and alumunium before getting redstone, so that's just a case of you fulfilling requirements in an unusual order.
6. The Nether stuff is there as a plot device for the theme of the pack and to act as an alternative means of resource acquisition for those potentially wanting a break from crops. The strict mining progression is there to match the crop progression.
7. NEI crashes are well known, and are a result of the way Minetweaker silently reloads scripts whenever you enter a world (even after just going to the title screen) and the fact that AE2 doesn't like recipes in its inscriber being reloaded as it caches them. Only way to avoid this currently is to relaunch the client every time you disconnect from a world - Annoying, but if you don't you'll crash as soon as you check any recipe anyway currently.
8. This is basically just a case of some scripts not loading properly upon a reload as I'm presuming your issue is specifically with iron ingots. For some reason there is no recipe to cast iron ingots in the ingot caster (@joshie I keep meaning to ask you why this is) so I add one with scripts, hence no iron ingot casting when that script doesn't load properly.

A lot of the stuff you've said in the subsequent paragraphs boils down to the pack still being alpha and me not having the time to work on it as much as many would like (life before minecraft, the usual deal). I do appreciate the feedback though and am appreciative that you've taken the time to go so in depth.
Reactions: JustHeyo, fimbrethil and RagefaceKurosaki
S

RehabOholic said:
I would take Logistics pipes if they were in this pack! I really like AE, but AE2 seems like it made that mod late game. At least for me, mainly because I just got the hang of AE1 and was able to use everything, but I feel like I'm starting over with AE2. Logistic pipes I would love to learn more about that mod. I have only made a remote order and that's it. I have always wanted to use auto crafting. But sadly it's not in this pack.
Click to expand...

Pheonix: Any thoughts about this? Logistics Pipes could be a nice addition given it's capabilities. I have used it quite a bit to make Biofuel manufacturing system and more.
E

Desman said:
One of the quests gives you bauxite that you can smelt.
Click to expand...

SyberSmoke said:
Pheonix: Any thoughts about this? Logistics Pipes could be a nice addition given it's capabilities. I have used it quite a bit to make Biofuel manufacturing system and more.
Click to expand...

Last time I looked at it, it wasn't updated to the version of BC I was using at the time. I'll look again though.

Rodger said:
@thephoenixlodge, there isn't any way currently to get shimmerleaf or cinderpearl plants from TC. Maybe agricraft seeds for them would be useful? Or at least the shimmerleaf, as it's semi-needed to unlock some researches (though I'm guessing using knowledge fragment research notes could work too)
Click to expand...

How's this? (shimmerleaf is over the page) 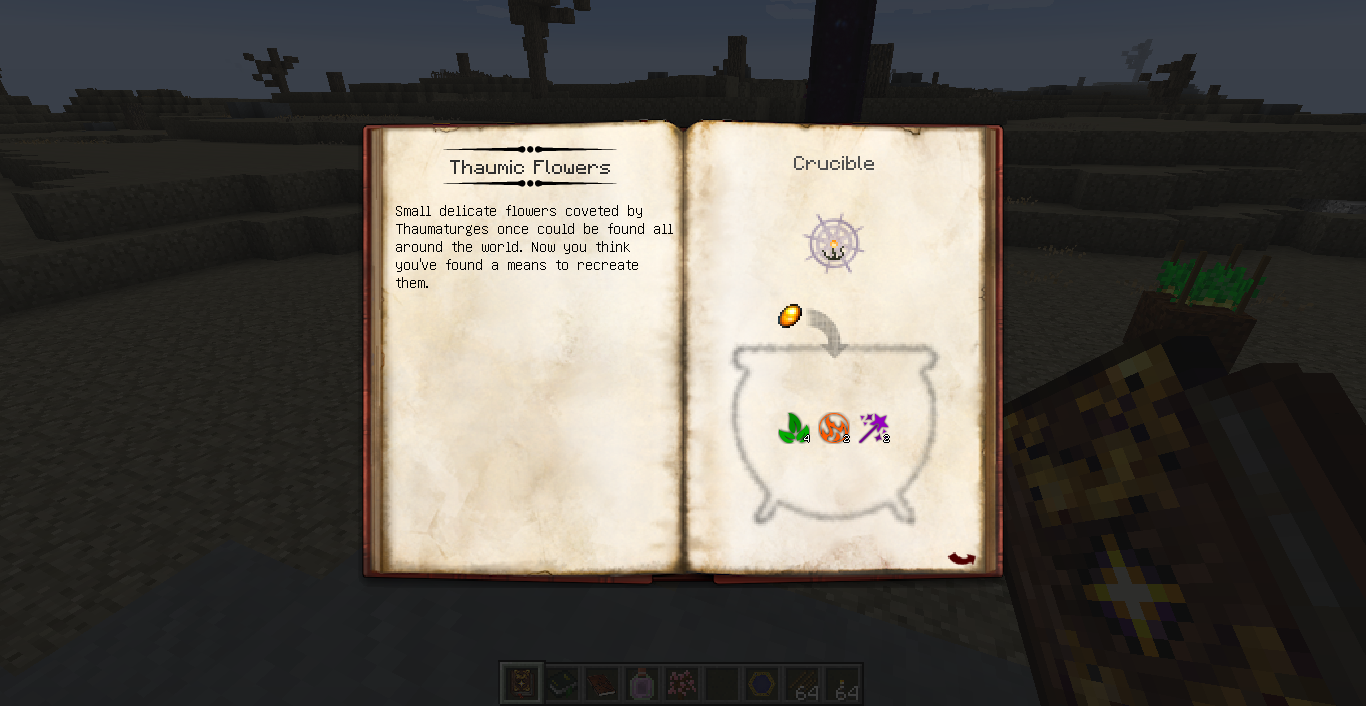 No, that's one of the vat/nether quests.
R

whenever i see someone with a nei crash come up, i just laugh like literally every second page is someone asking about nei crash and then someone telling the answer
Reactions: hiharryII
J

Umm, there is a recipe for cooling iron.

What are the odds I would get attacked buy a baby zombie riding a chicken, kill the zombie, save the chicken, and lead him to safety?!? Happy Me
Reactions: JustHeyo
R

RehabOholic said:
What are the odds I would get attacked buy a baby zombie riding a chicken, kill the zombie, save the chicken, and lead him to safety?!? Happy Me
Click to expand...

I just need a feather so that's ok

RehabOholic said:
I just need a feather so that's ok
Click to expand...

They also won't shed or lay eggs. If you want a feather you need to kill it.
R

thephoenixlodge said:
They also won't shed or lay eggs. If you want a feather you need to kill it.
Click to expand...

That's strange, it just lay/ed an egg while I was typing. Also, while I was leading it with a seed it shed a feather also.
S

thephoenixlodge said:
Last time I looked at it, it wasn't updated to the version of BC I was using at the time. I'll look again though.
Click to expand...

There may be a version for what your using. As the version listed on the forum is far less then their current #113 But I am not sure what BC version LP #113 is meant to run with.
W

thephoenixlodge said:
They also won't shed or lay eggs. If you want a feather you need to kill it.
Click to expand...

When I first got them I packed three chickens ontop of a hopper trapped with glass panels like every time I do. They laid 128 stacks of eggs so far.
Reactions: JustHeyo
T