Miimmi said:
Is there a download file from these buildings?

Do you mean a world download? I will probably do one later when things are less... WIP.

The buildings are all "rhn originals", I design them mostly in my head and as I go along, and build them manually.

Bit of a mini side-build:
I am currently working on something that requires a lot of tracks(Railcraft). And the Rolling Machine is a bit boring and its size doesn't at all fit its role of "rolling" metal. I am sure we can do better than that 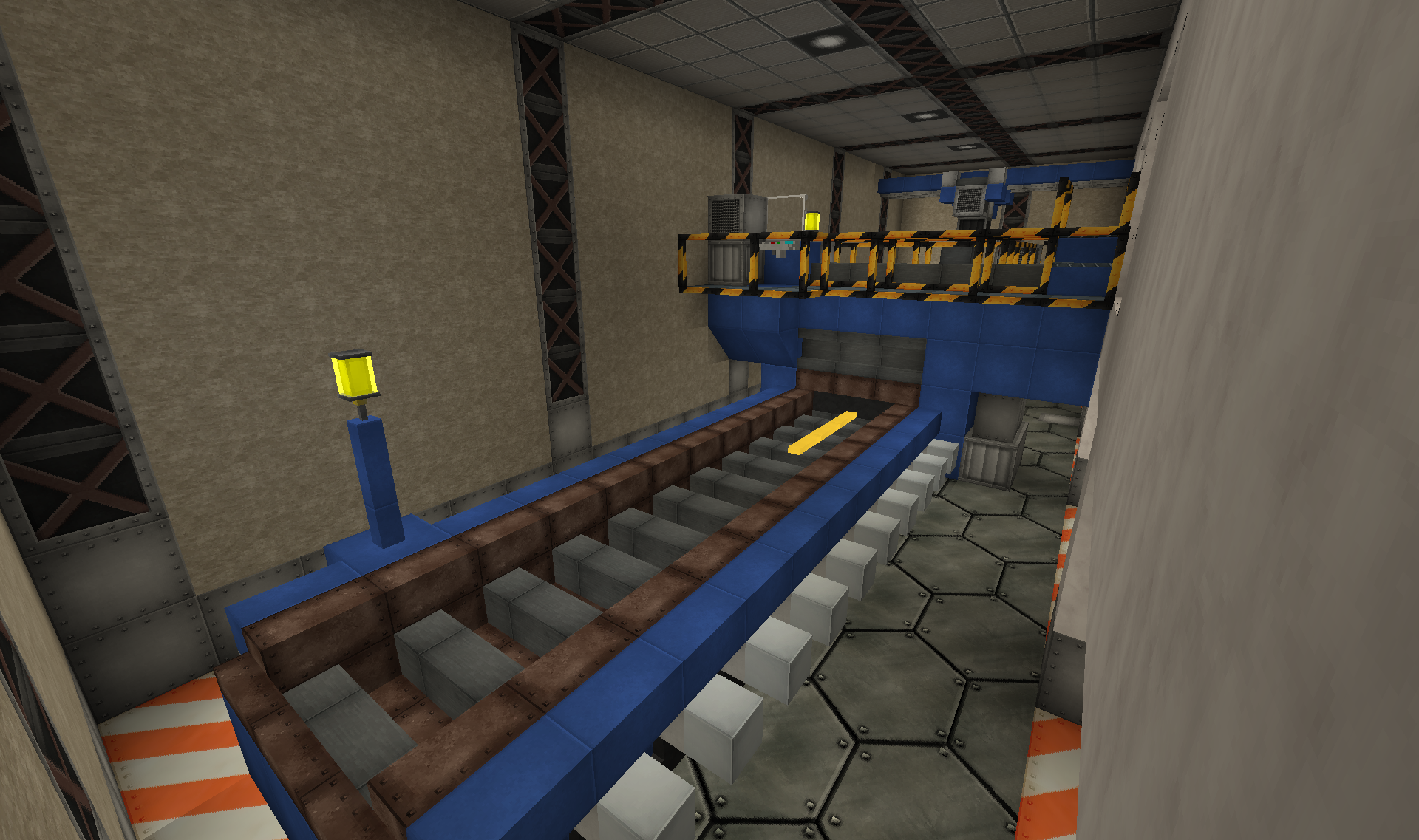 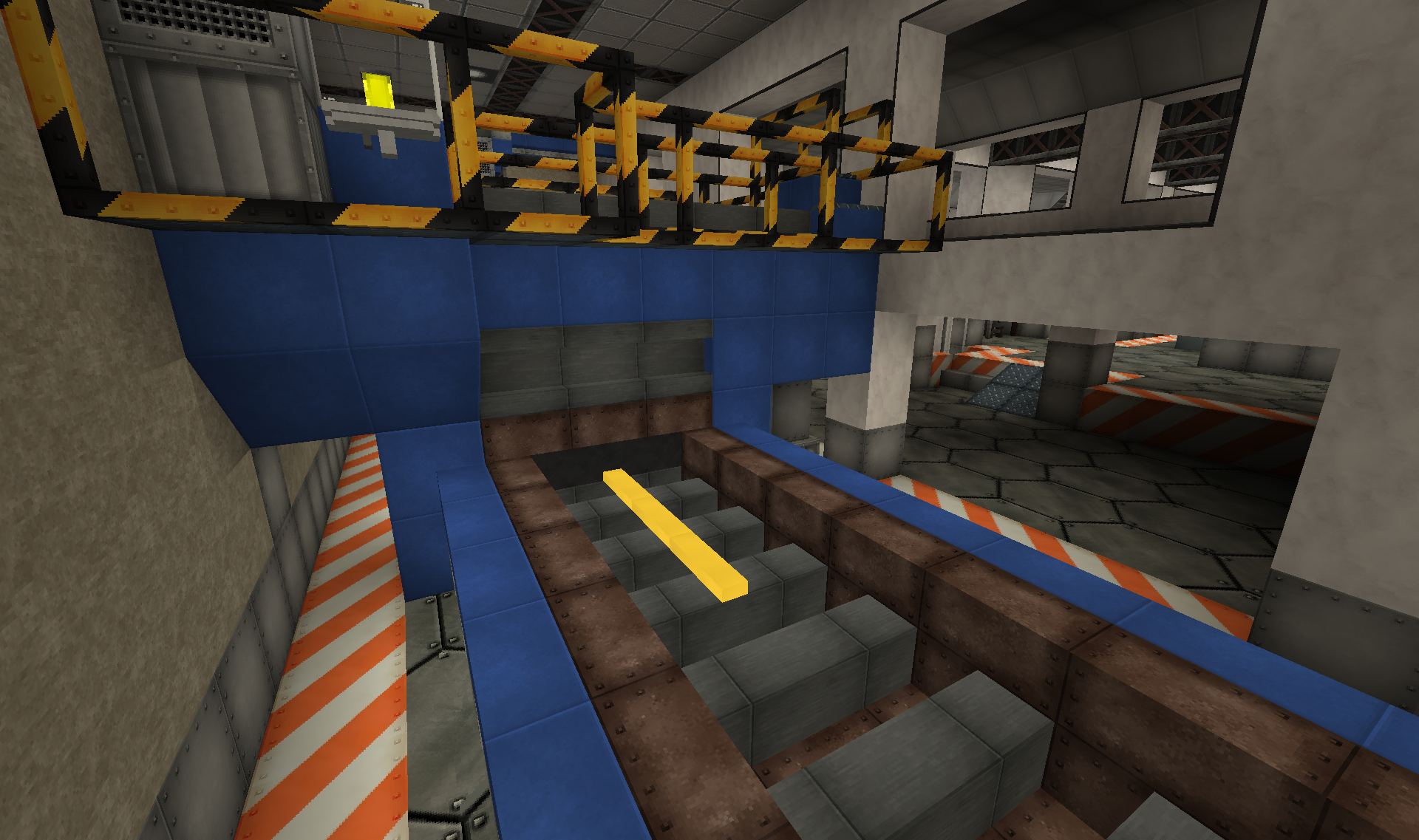 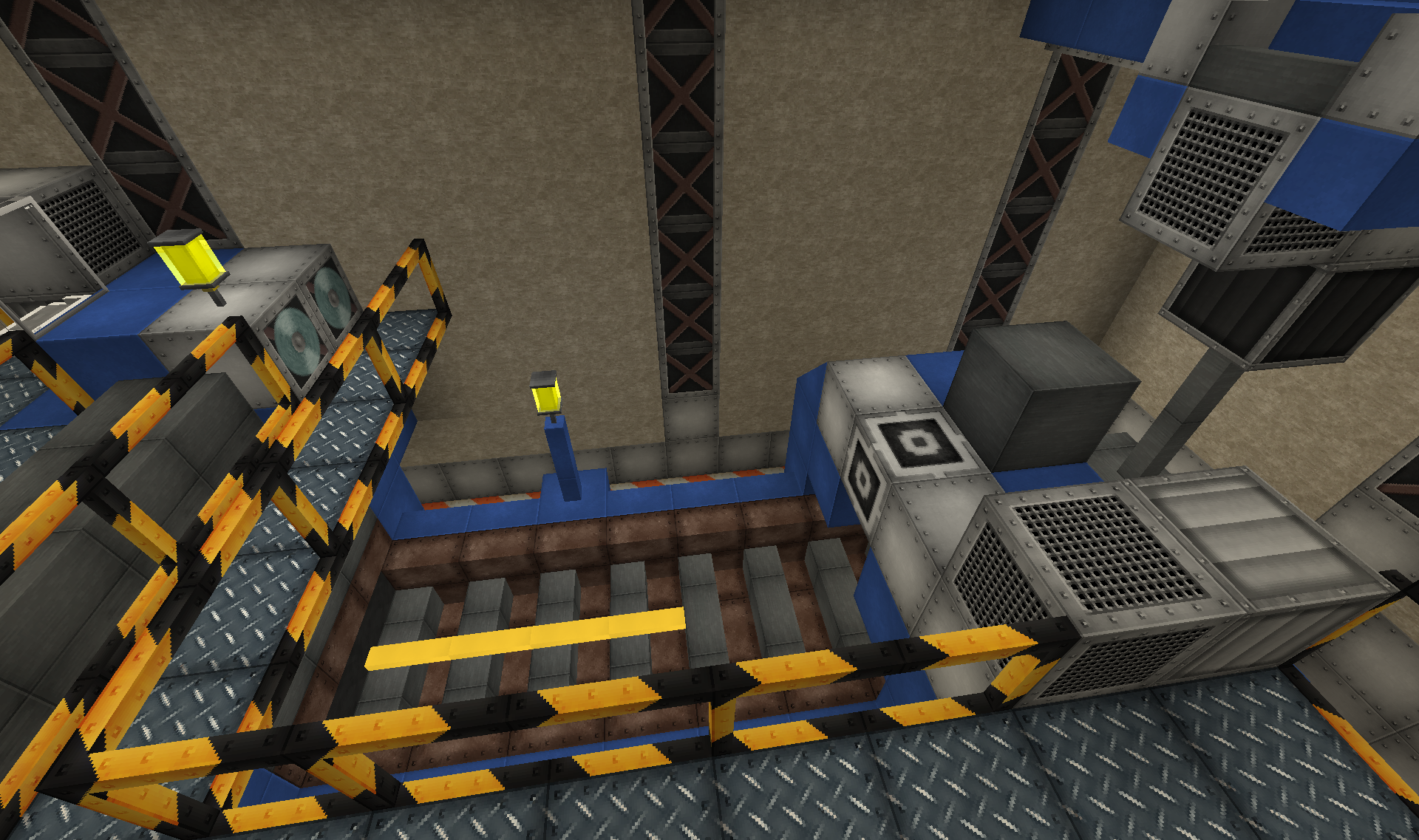 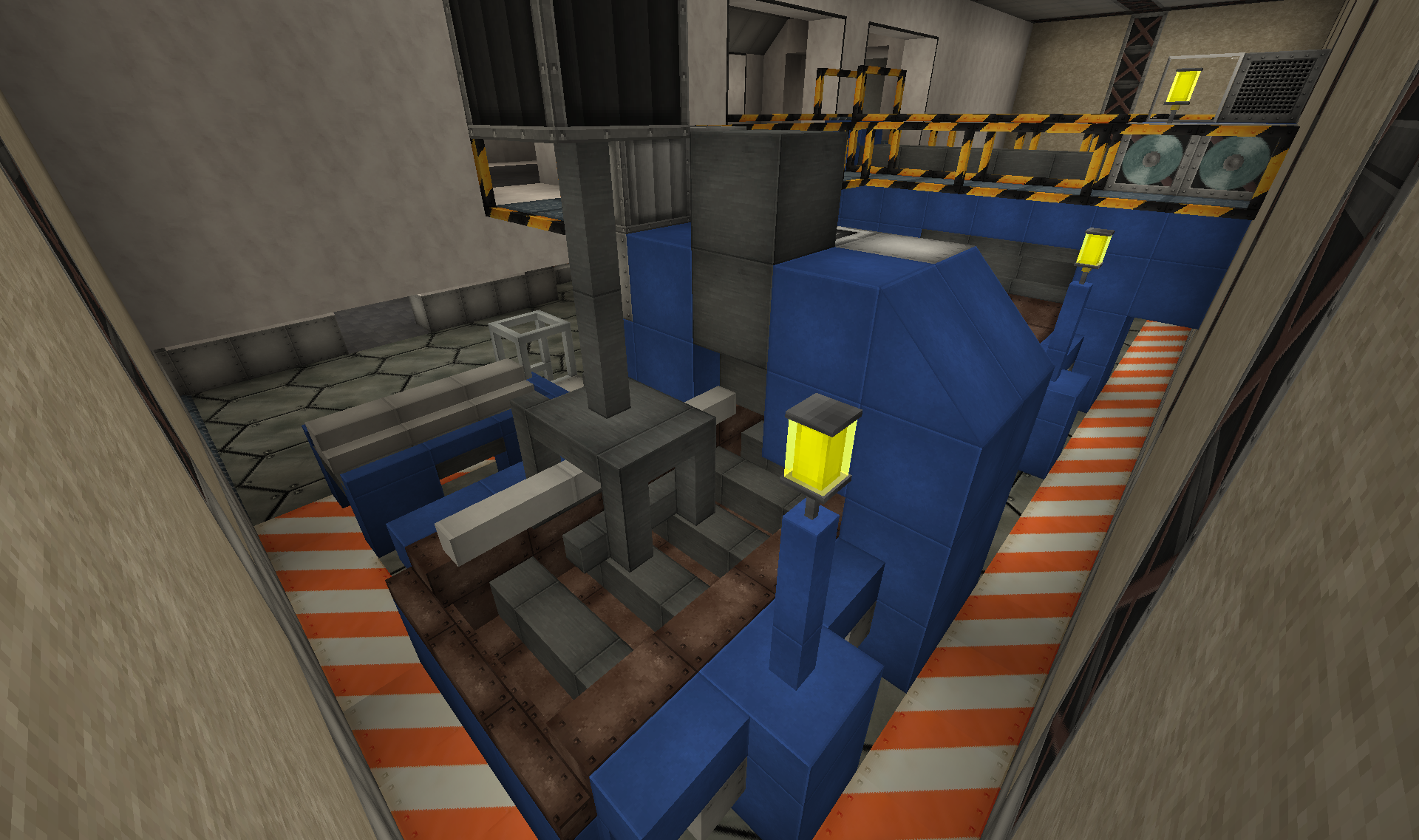 I put the Rolling Machines under the construction as I never did find a good way to incorporate them directly lol But perhaps... 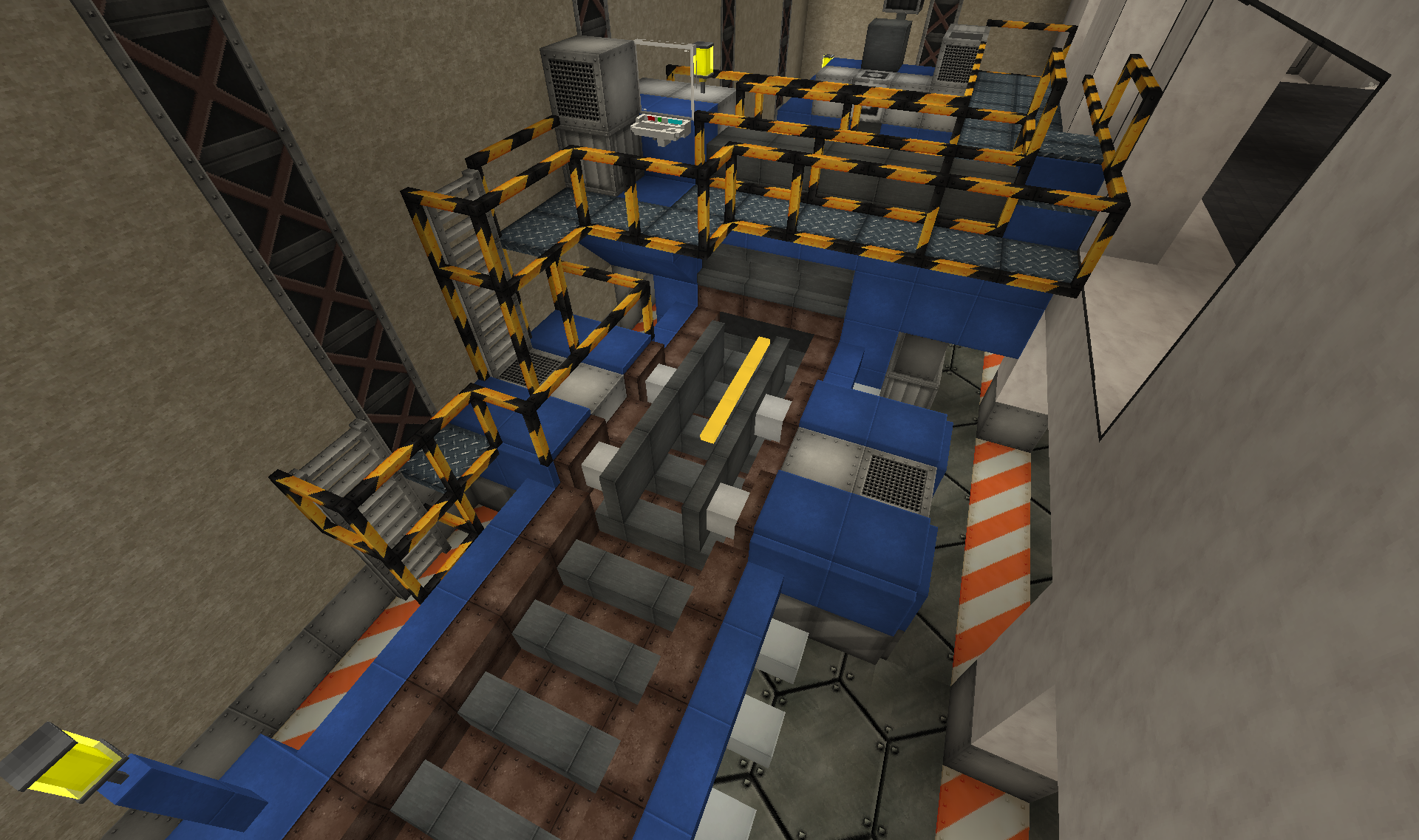 It is sort of missing the foundry part which smelts/heats the metal before rolling. I am thinking about how I can incorporate some other machines into that(perhaps TiCo Smeltery, RoC Pulse Jet Furnace).
Last edited: Jan 24, 2017
Reactions: Pyure, ICountFrom0, Yusunoha and 3 others

Buildcraft's Library Block I assume. Where you can copy out 64x64x64 chunks of area.

I have recently spent a great deal of time creating a Railcraft train network throughout my base(s): 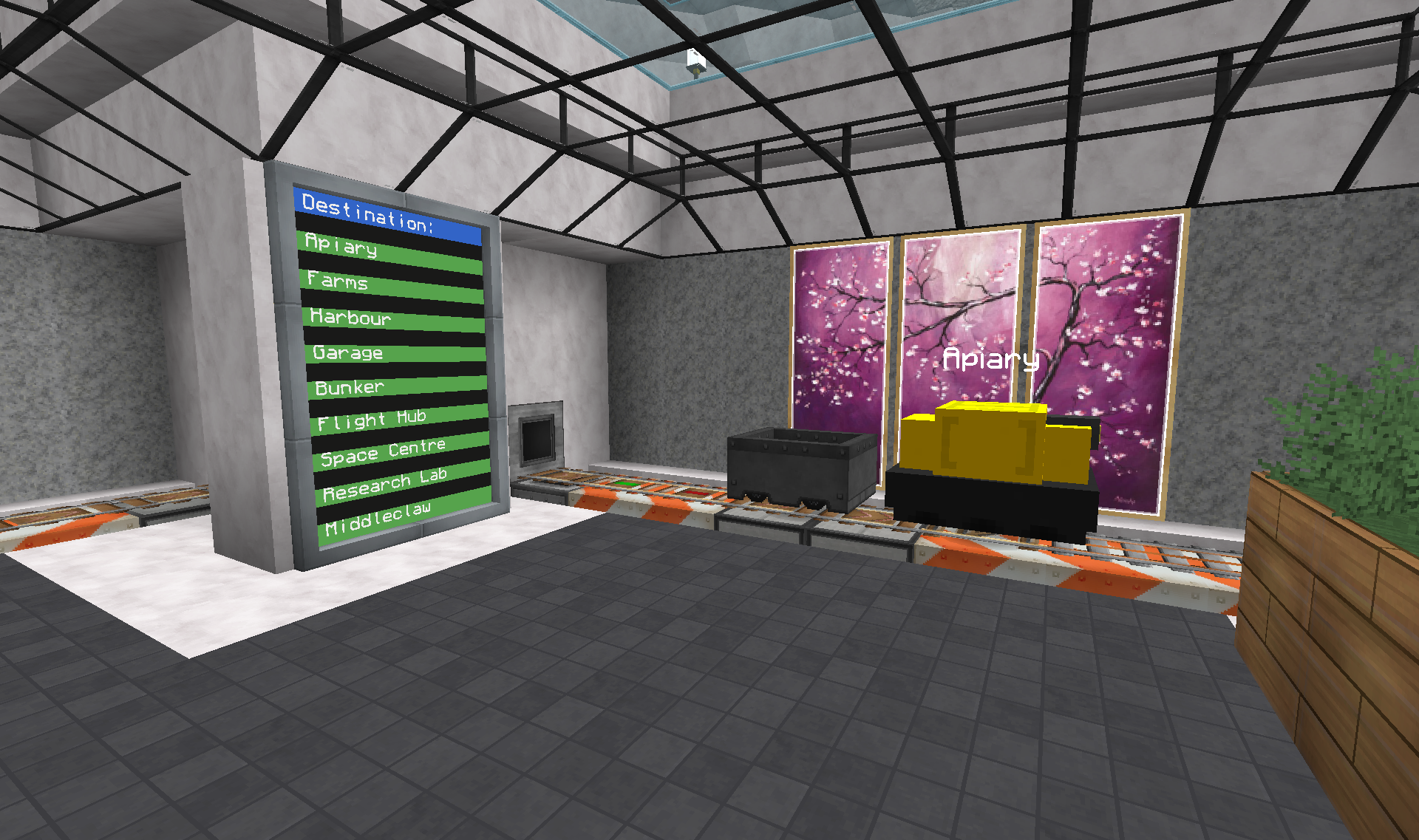 As a backbone for it I have created a ComputerCraft script to allow choosing the destination on a touch-screen monitor. It uses the Openperipheral Ticket Machine to create tickets for the Railcraft Routing system.

The script will auto detect Monitors and Ticket machine either adjacent or on wired modem. Upon first run you will be asked to the current station from the list.

While making the Railcraft Train network I ran into the problem of running trains up/down Elevator Tracks without getting occasional unlinking(locomotive keeps going, cart left behind).
I was unable to find a guide on how to pull it off, so once I found a solution myself I decided to share it.

The description on how I did it can be found here: http://imgur.com/a/lg5HT
Reactions: ICountFrom0 and Yusunoha

I just wanted to pop in and say thank you rhn for making this thread. I been lurking for a long time and your journal has always been a favorite of mine. (* ^ ω ^) (≧▽≦)o.｡.:*☆
L

It is so nice to see people use Railcraft, it seems to be such an overlooked mod. I adore it to bits myself.

I hate to self-promote, especially on someone else's channel, but I've used it a lot on my Let's Play of Minecraft on my channel. (Link in my Signature.)

Okay, enough of that. rhn, any idea how hard it'd be to transfer that script to Open Computers?

KingTriaxx said:
Okay, enough of that. rhn, any idea how hard it'd be to transfer that script to Open Computers?
Click to expand...

I have zero experience with Opencomputers. But I do know that it has a Ticket Machine of its own, so it is doable.
You probably only want to take some inspiration from my script. The code matches my coding skills, which are pretty terrible

Mine are worse, but I will definitely have a look.
L

Holy crap, rhn, your builds are amazing. Do you have any plans to do stuff with ReactorCraft in the future?

lucariomaster2 said:
Holy crap, rhn, your builds are amazing. Do you have any plans to do stuff with ReactorCraft in the future?
Click to expand...

Crazy thought... and very inefficient material wise. Nothing says you have to turn on a reactorcraft reactor. Maybe incorporate the parts into a build. Crazy but has potential for your wonderful designs.

Scottly318 said:
Crazy thought... and very inefficient material wise. Nothing says you have to turn on a reactorcraft reactor. Maybe incorporate the parts into a build. Crazy but has potential for your wonderful designs.
Click to expand...

I might do it towards the end of the world

Reika's mods are pretty well optimised, chances are you'll have no noticeable performance impact from using them.

(if you decide not to power them up- the engine models themselves look pretty awesome. RoC itself doesn't have worldgen features, so you should be able to drop it in without issue if you want fancy decoration)​

Celestialphoenix said:
Reika's mods are pretty well optimised, chances are you'll have no noticeable performance impact from using them.

(if you decide not to power them up- the engine models themselves look pretty awesome. RoC itself doesn't have worldgen features, so you should be able to drop it in without issue if you want fancy decoration)​
Click to expand...

Yeah I am not implying that RoC is any worse than anything else. Pretty sure Reika knows his shit. Problem is that lots and lots of even well optimised things add up. And the rather large setup and logistics to support something like a reactor(that I don't really see the need for, I dont even know what it should be powering) will surely be a factor when added to everything else I have going on.
Reactions: Celestialphoenix and Inaeo
I

I've reluctantly come to the conclusion that sometimes less is more. Making all the power when not needing it pulls from CPU resources that are already slim pickings. Same with storing "All The Things" - if I can't find a reason to use it, I can't be arsed to store it. Moderation leads to stability and longevity.
Reactions: GamerwithnoGame, Celestialphoenix, Linda Hartlen and 1 other person

I have lately only been playing a bit on and off(mostly off), so not had a whole lot of big progress. It has mostly been a bit here and there, but it does kinda add up after this long.

First off, quite a bit has happened on the large scale of the build:
Very early map: 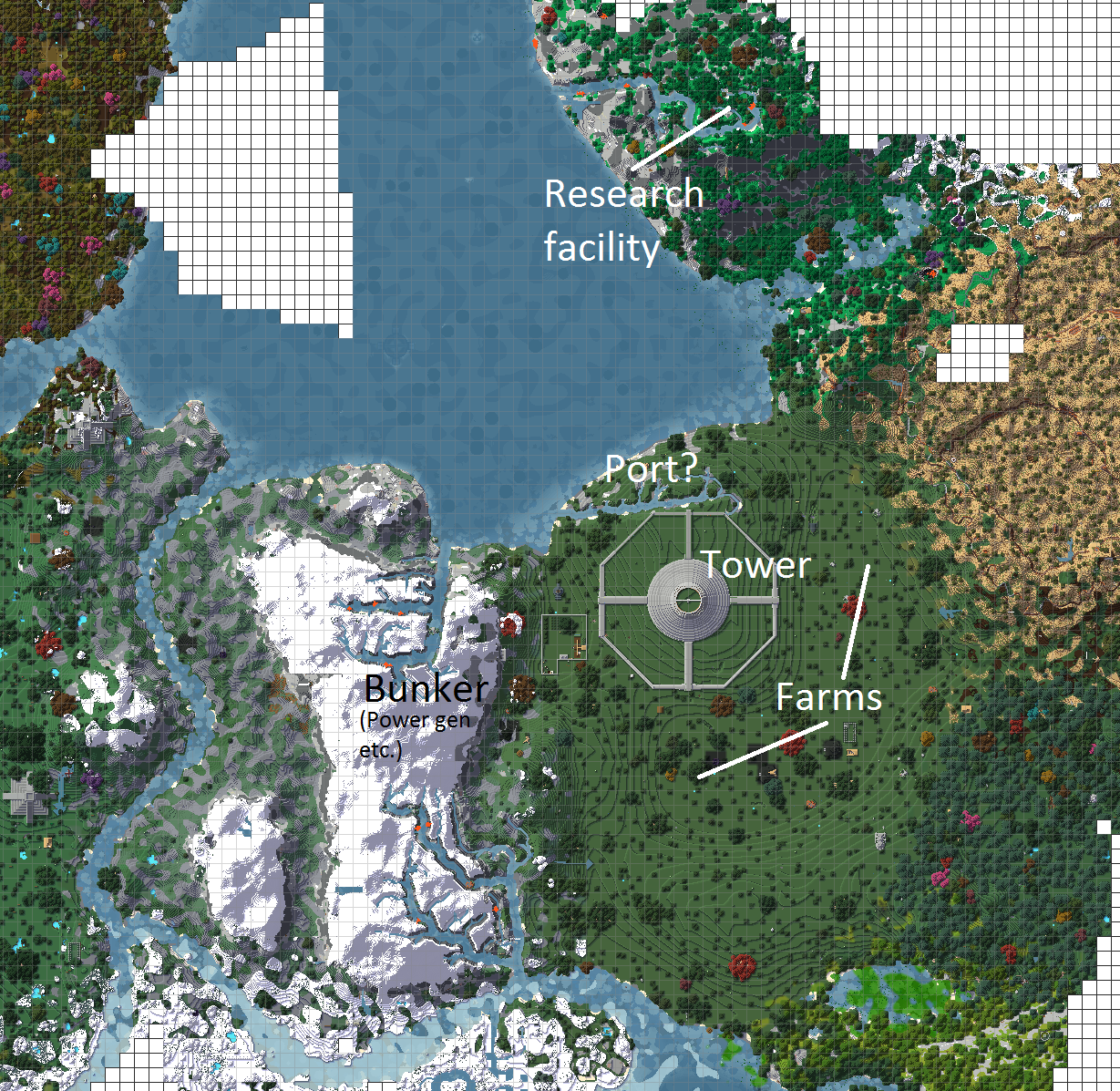 This is from the time of my noob cave and first started building a bit with cobble.

A lot has happened compared to the current map: 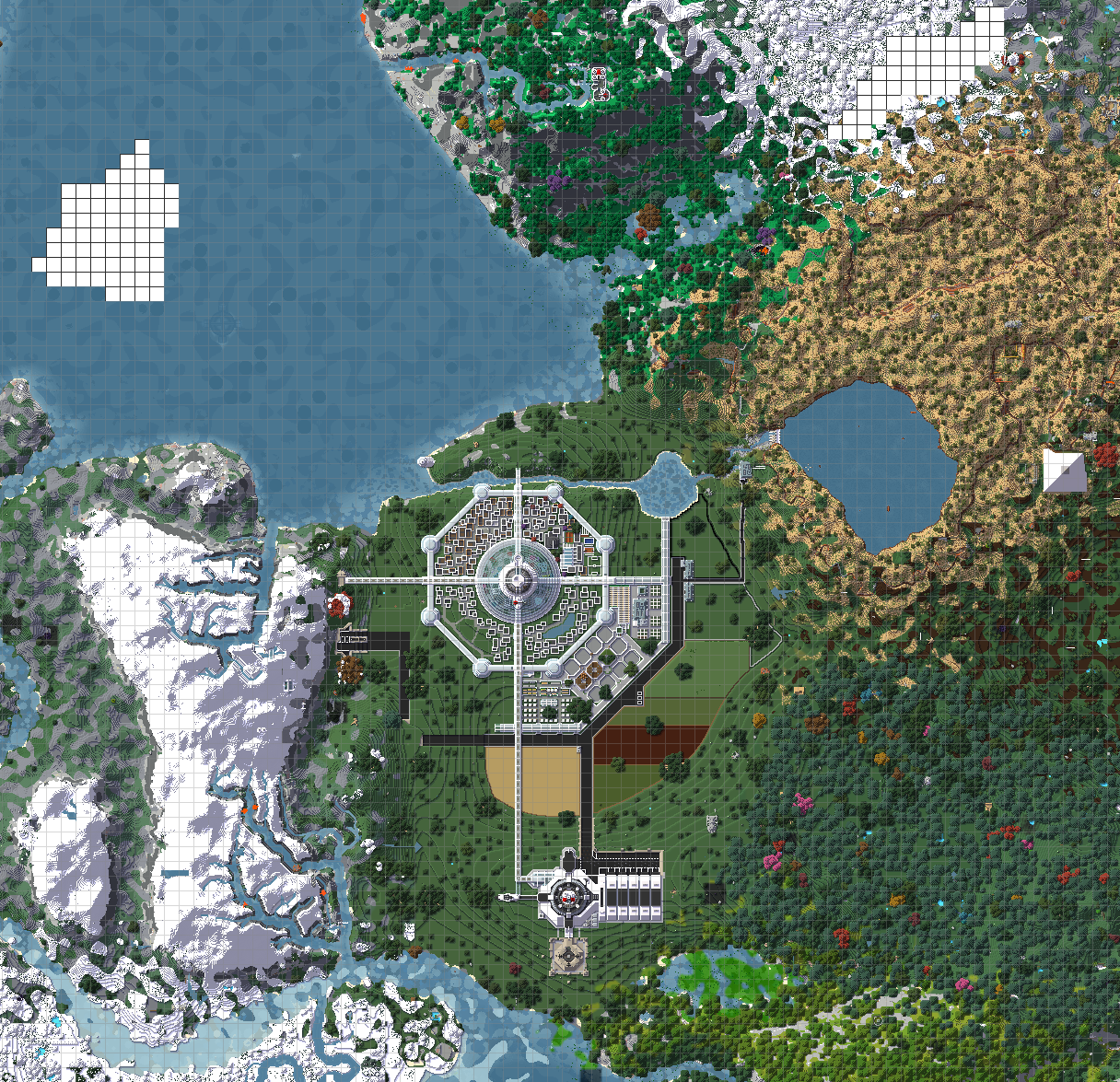 Biggest change visible from this view is probably the extension of the stream and the new big lake.

The seed had created an almost closed canyon to the east. It was perfect for a water reservoir. First problem however was the "almost closed" part So as usual I had to fix "nature": 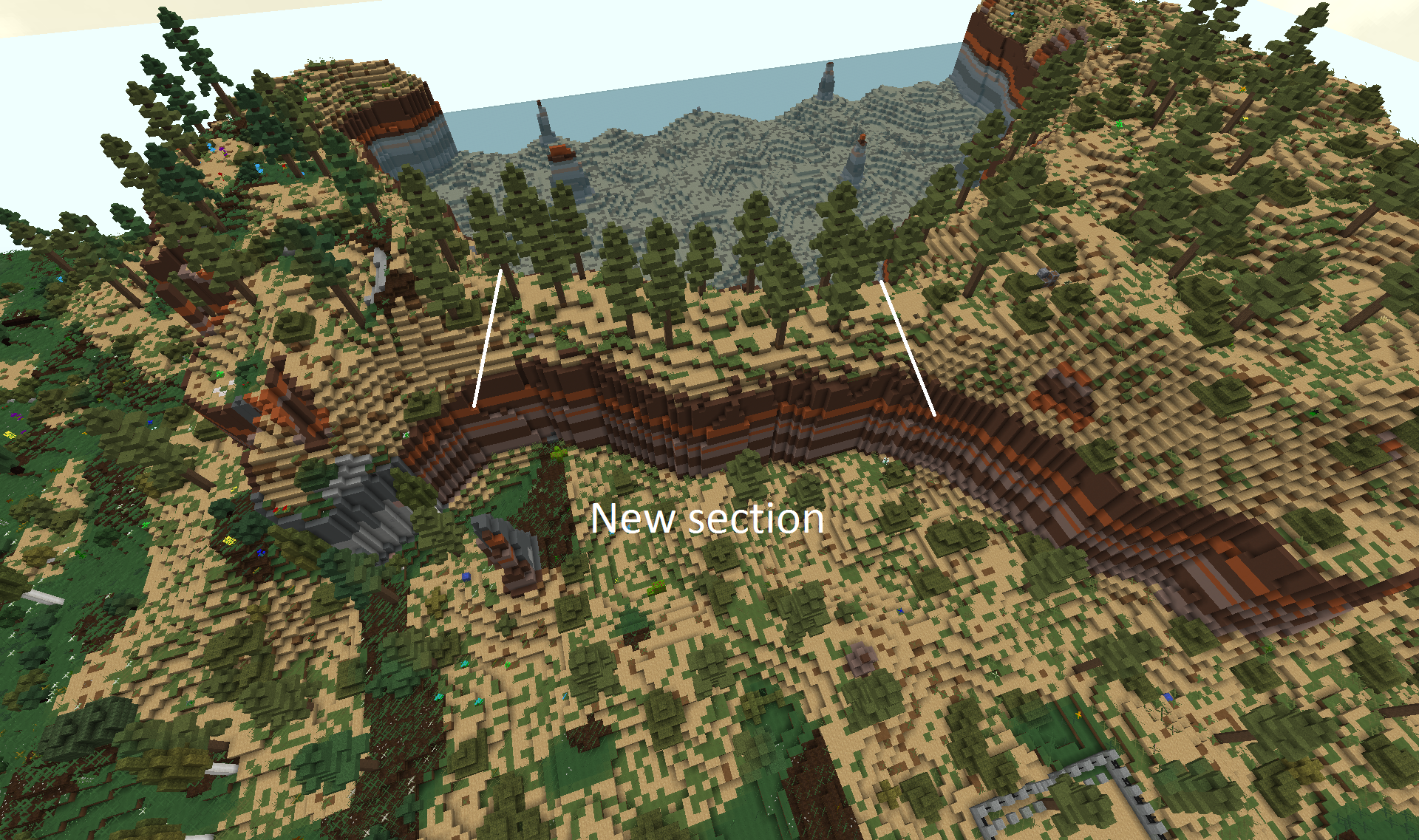 Turned out mostly indistinguishable from the natural spawns I think. Mostly hollow however, but who cares.

Then came the task of clearing trees and bushes from the canyon, before finally I could start filling in the water: 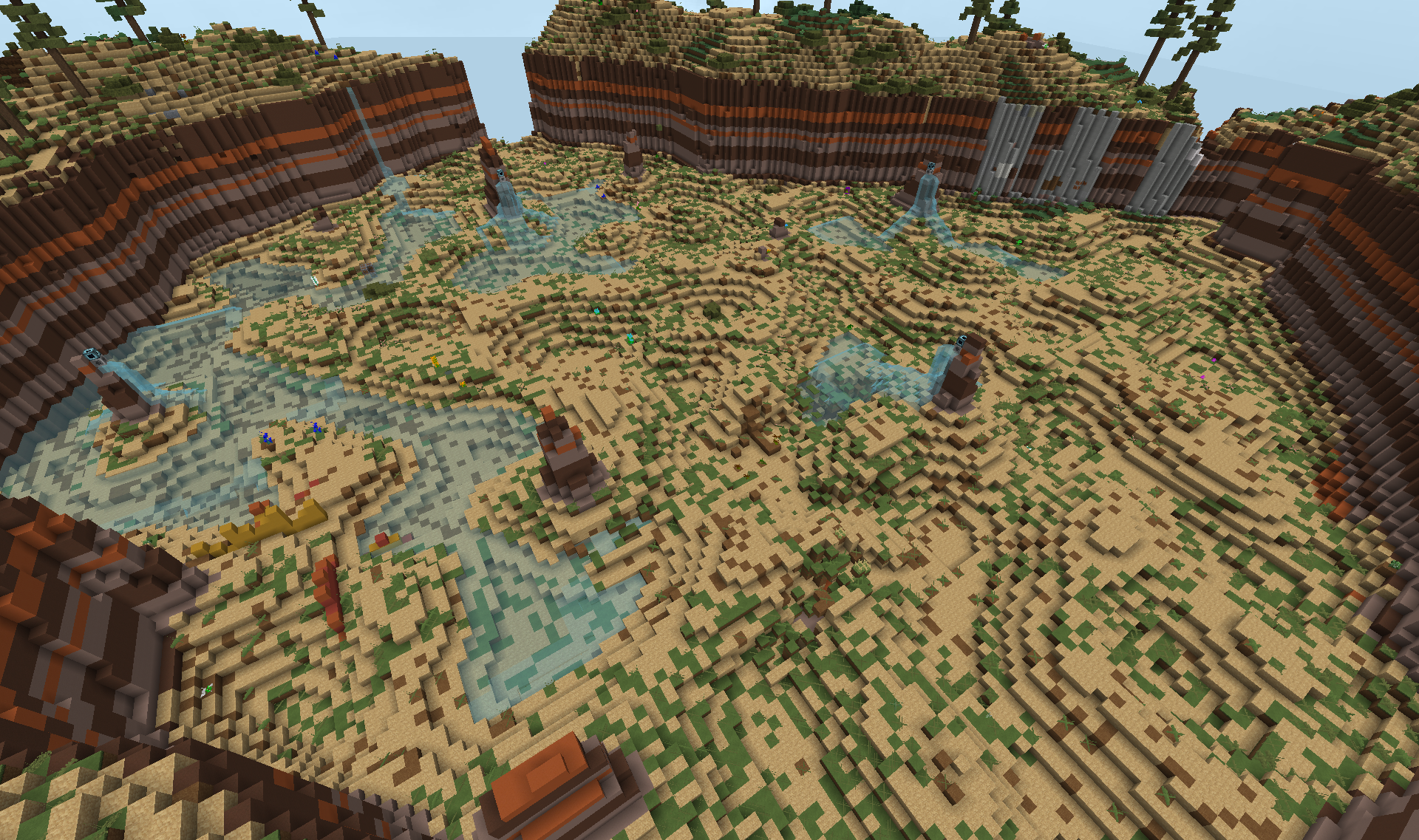 I probably underestimated the shear volume of the canyon, so with 4 flood gates it was still painfully slow. I ended up filling it manually(with the help of the "new" water mechanics) with a Rod of the Seas from Botania. Simply flew round the canyon and clicked the outer edge layer by layer. The water mechanics quickly filled in the rest.

On the other side of the canyon I removed some material to create a gap for dam: 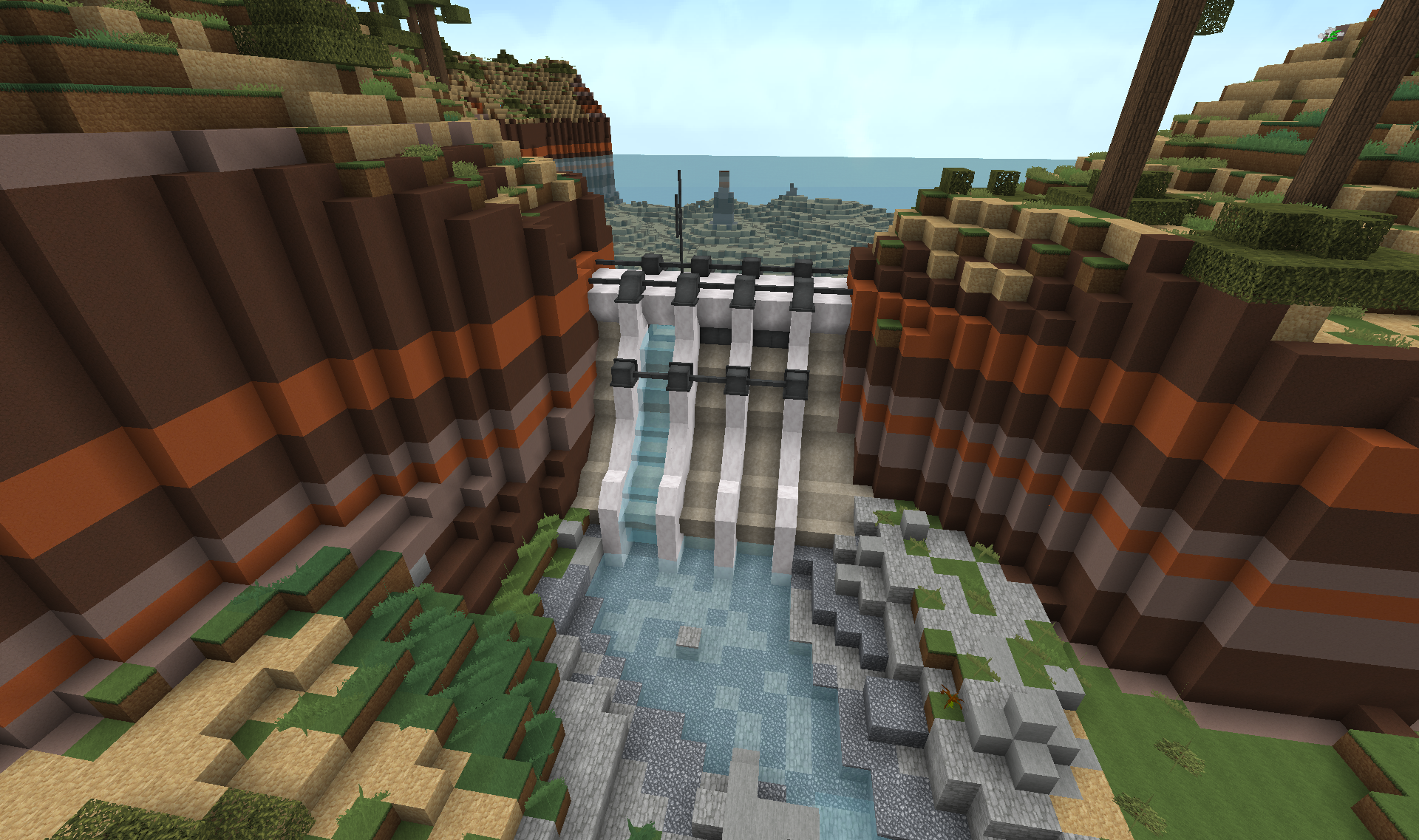 I could not resist adding some Drawbridges and switches to make it possible to open/close the locks on top of the dam.

Complete with intake for hydroelectric plant: 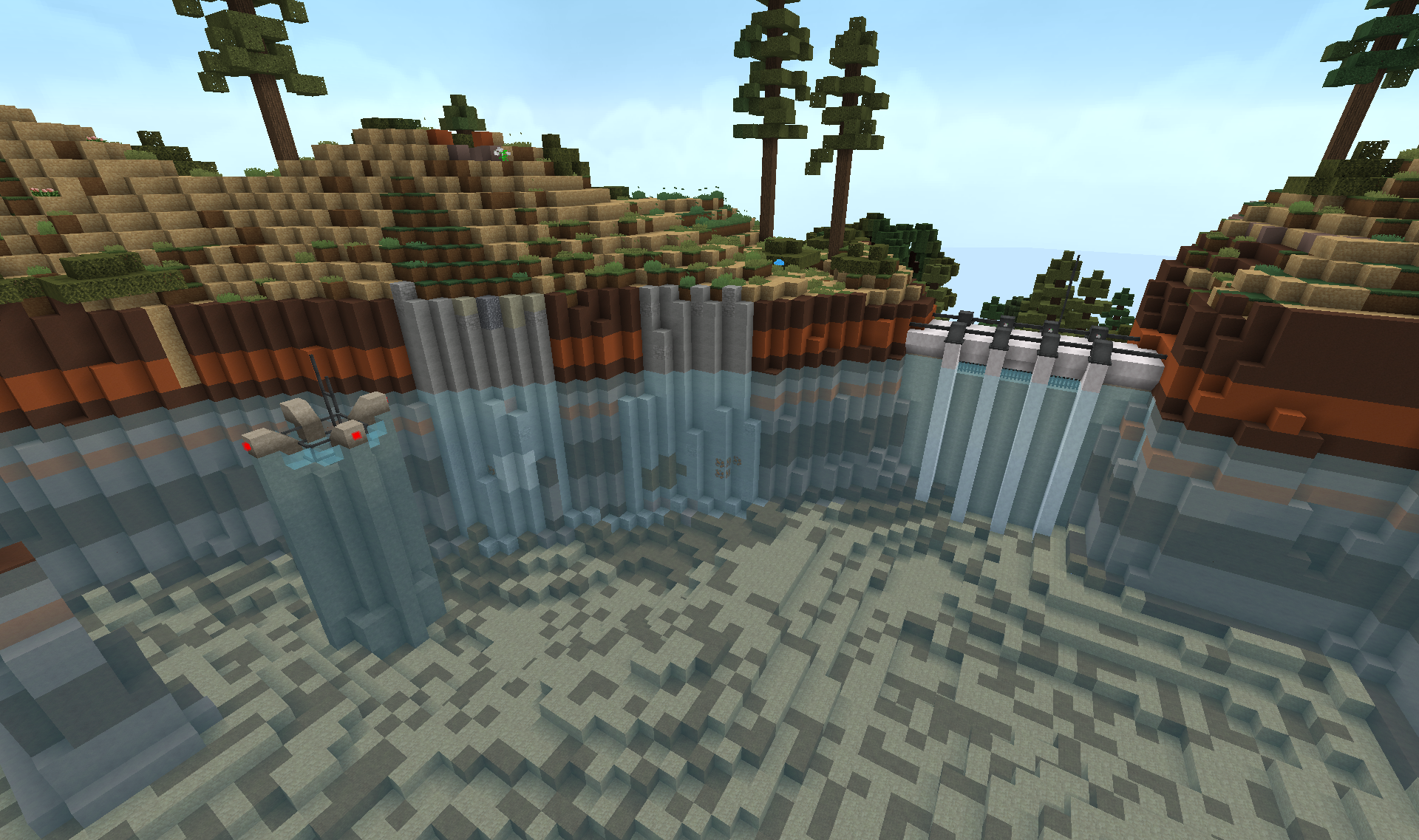 Tried to mimic the landscape around the damn as a now mostly dried out river bed: 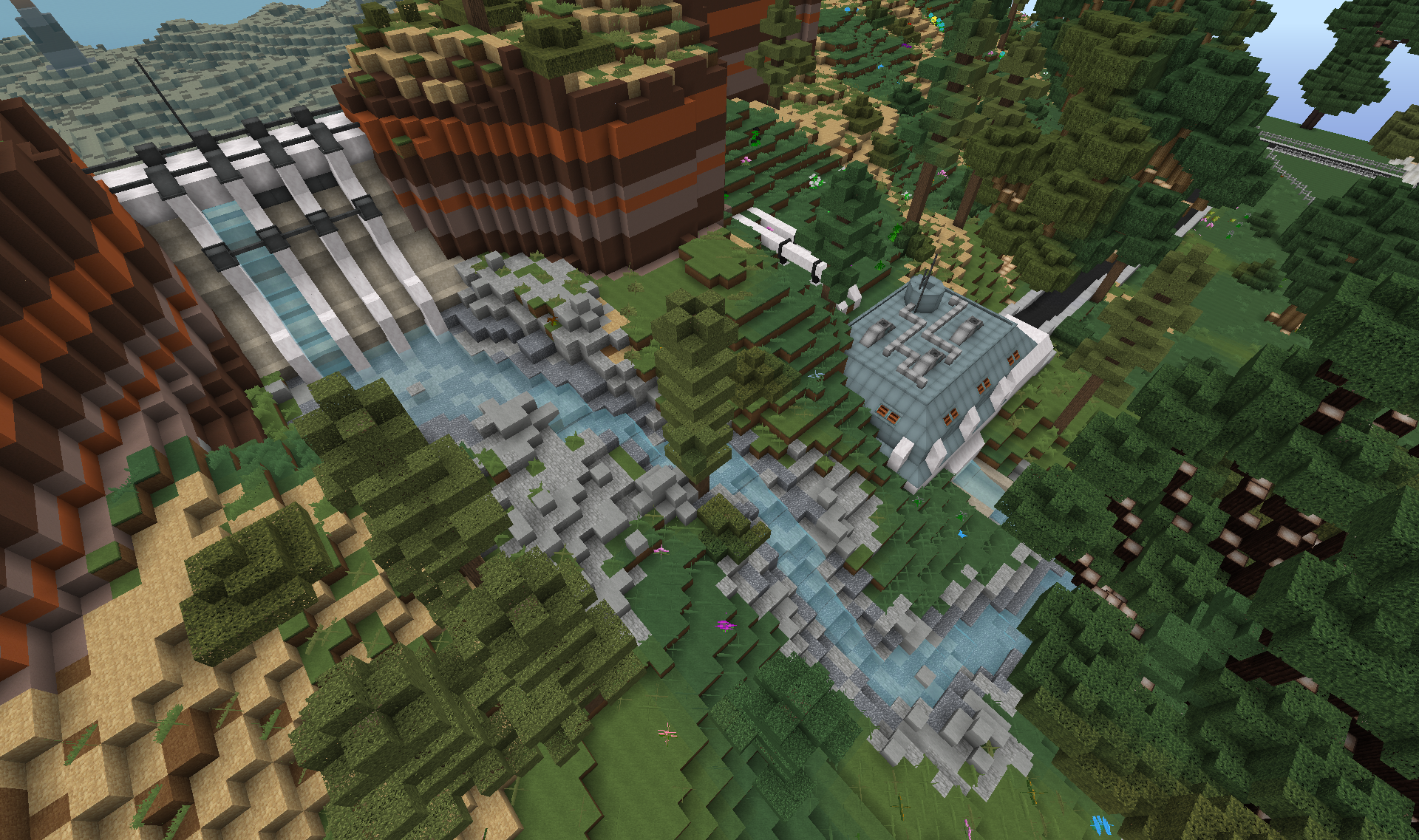 Also visible is the new hydroelectric plant and the pipes leading to the intake in the lake.

Seen from further down the valley: 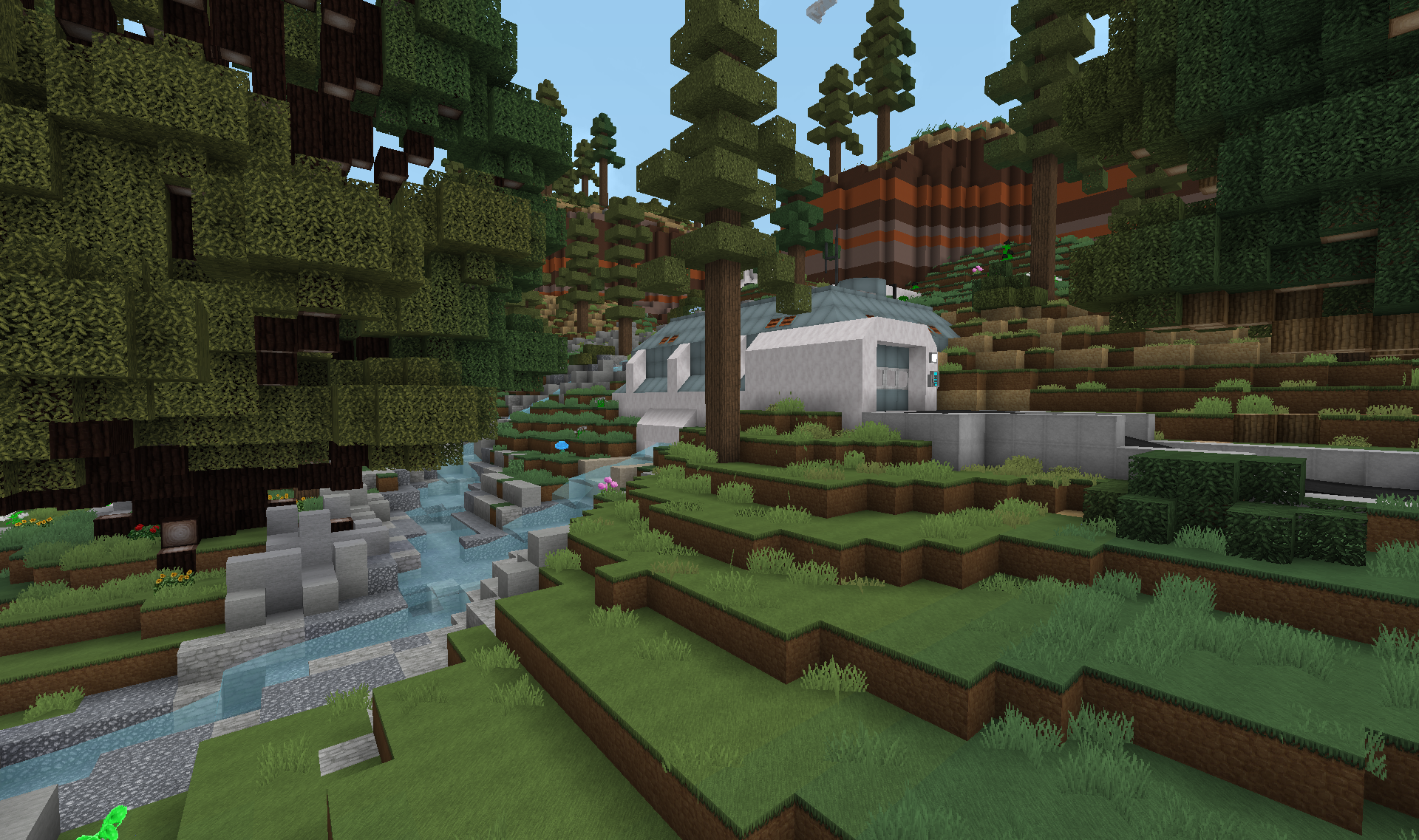 The overflow and the "spent" turbine water joins back up here too. 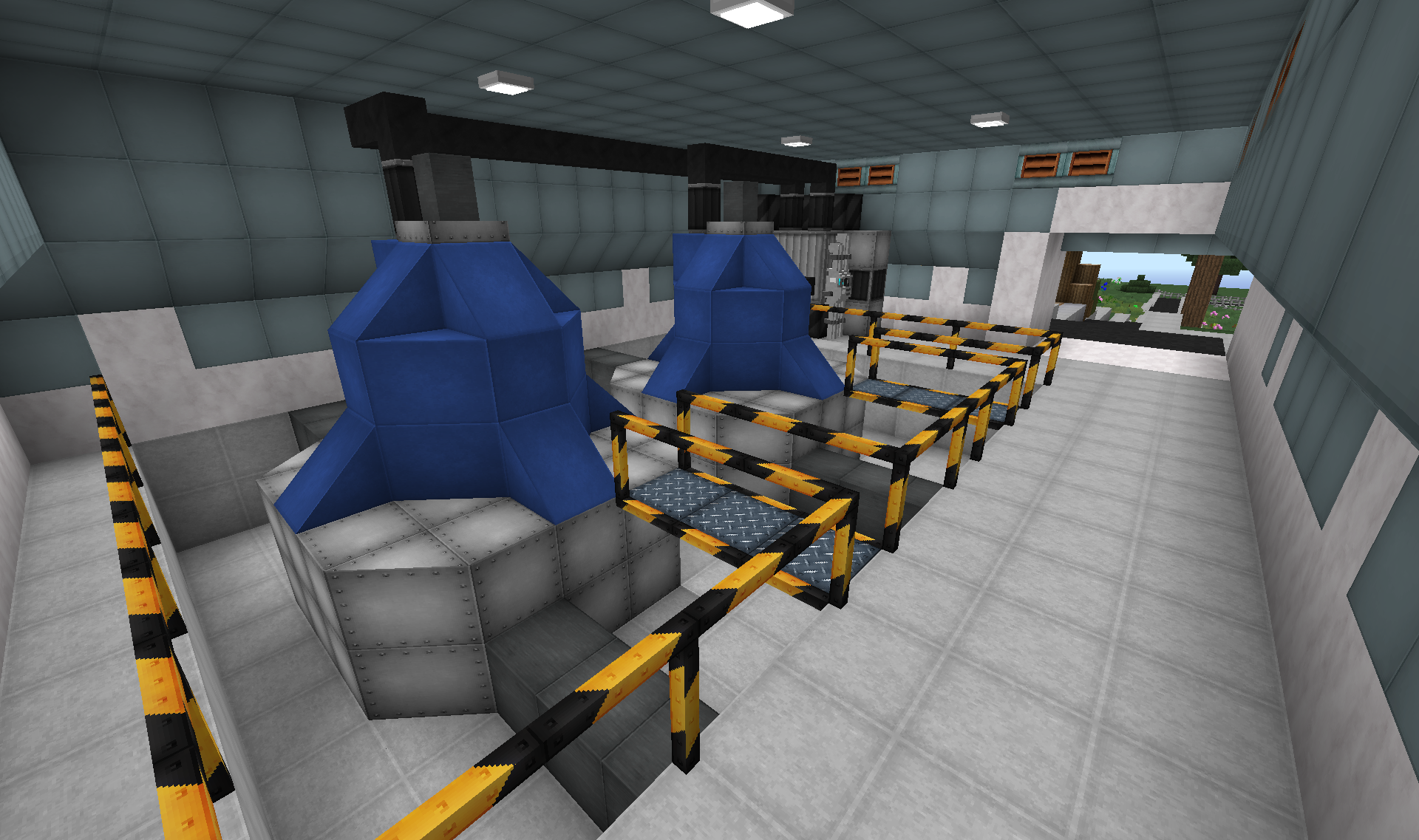 Built a couple of turbines inside. Purely cosmetic. At least at this point...

The stream then drains out into a small pond: 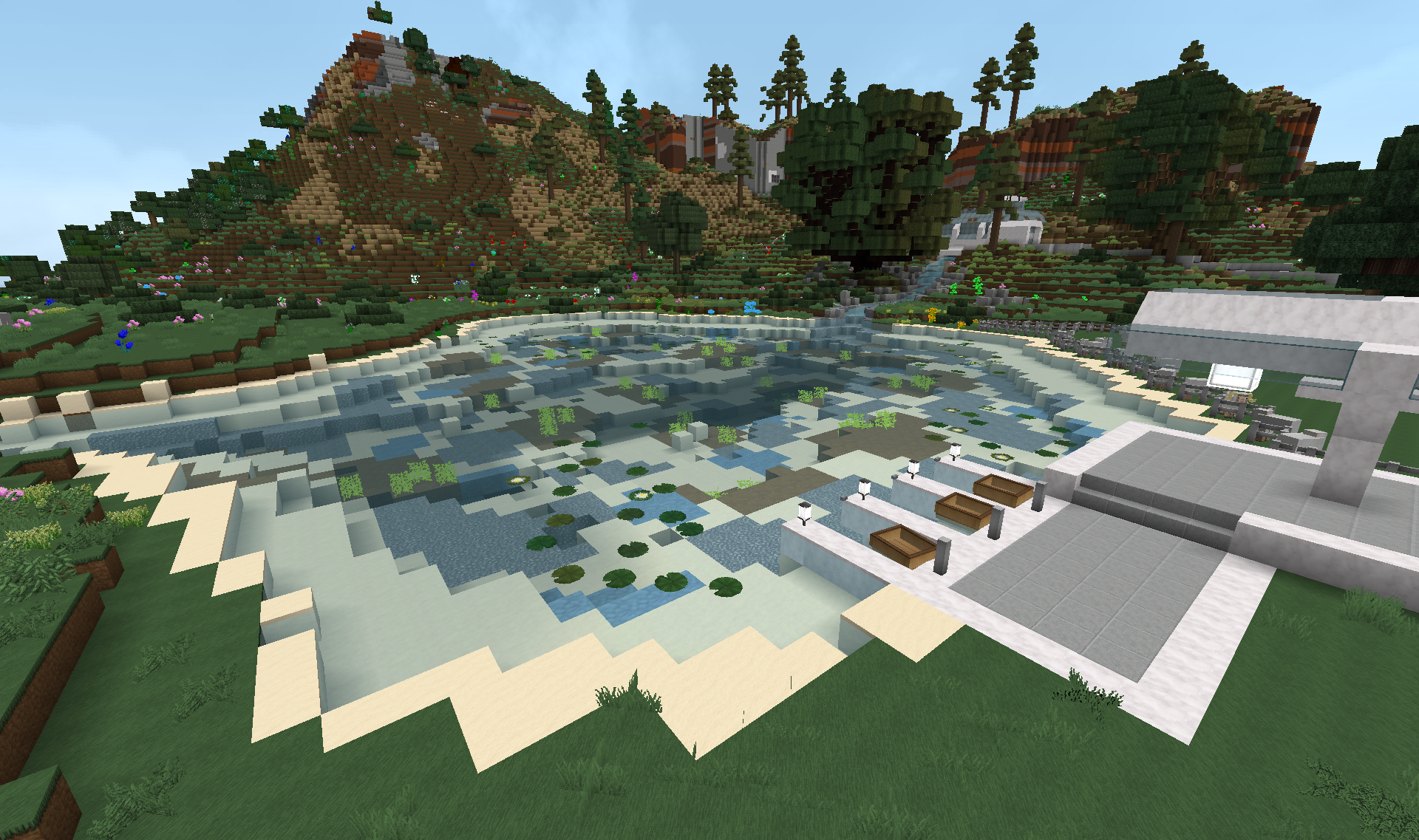 The stream then continues out towards the ocean, passing by the outer circle of the tower: Oops, bit unfinished
As you might have noticed on the maps there was a stream/river here from start. However it was much higher up and originated out of nowhere on the top of the hill. The oddly unfinished dome was half buried in the terrain before. To make it fit the rest I had to lower it considerably, practically building the river from scratch.

At the river mouth I added a light/observation tower. 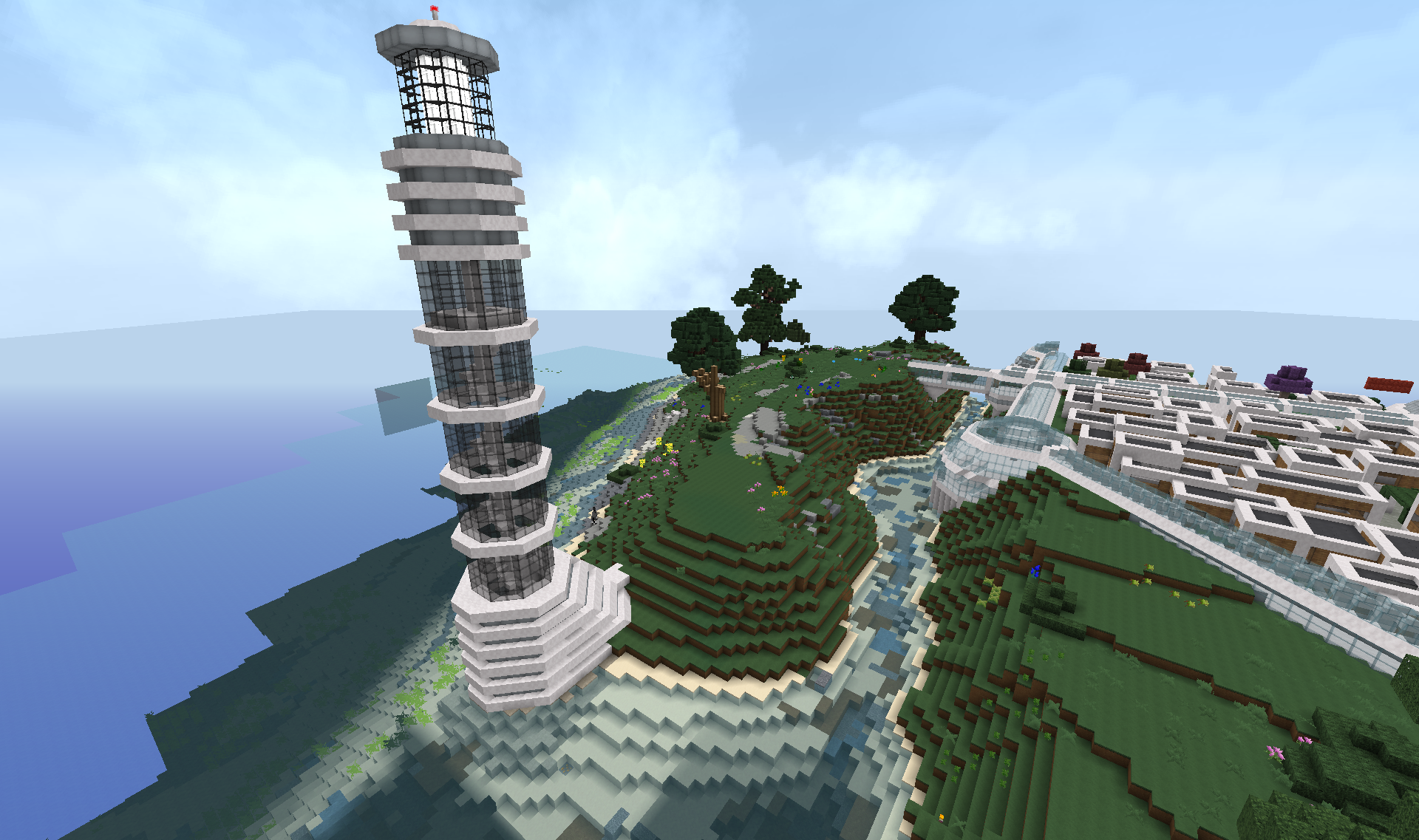 I have plans to build a harbour area to match it. Not sure if it is going to be located on the peninsula(formed by ocean and river) or down in the cove behind this pic. Maybe even both. Passenger one place, industrial the other. More on that when I figure it out

Back over at the pond I added some animal farms: 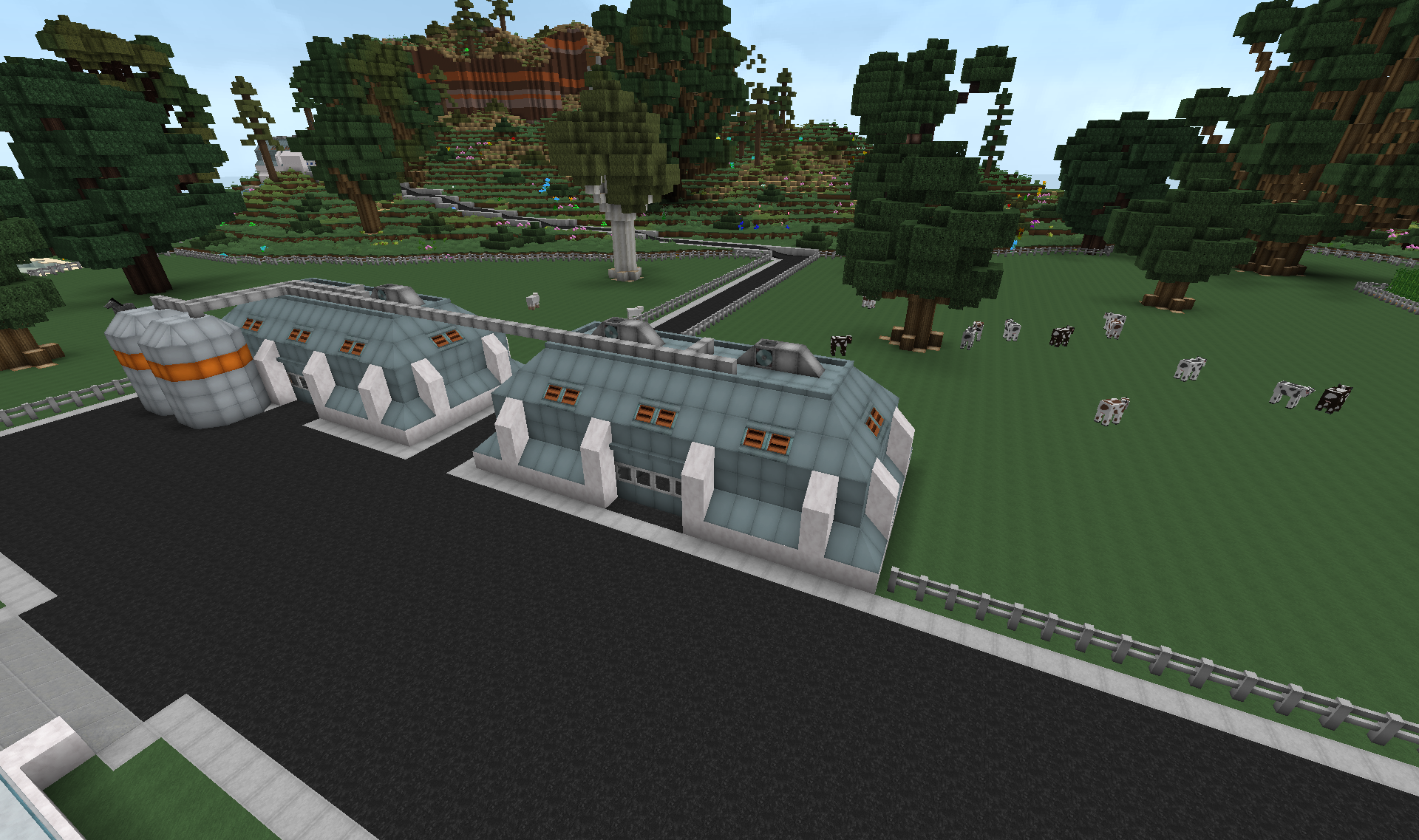 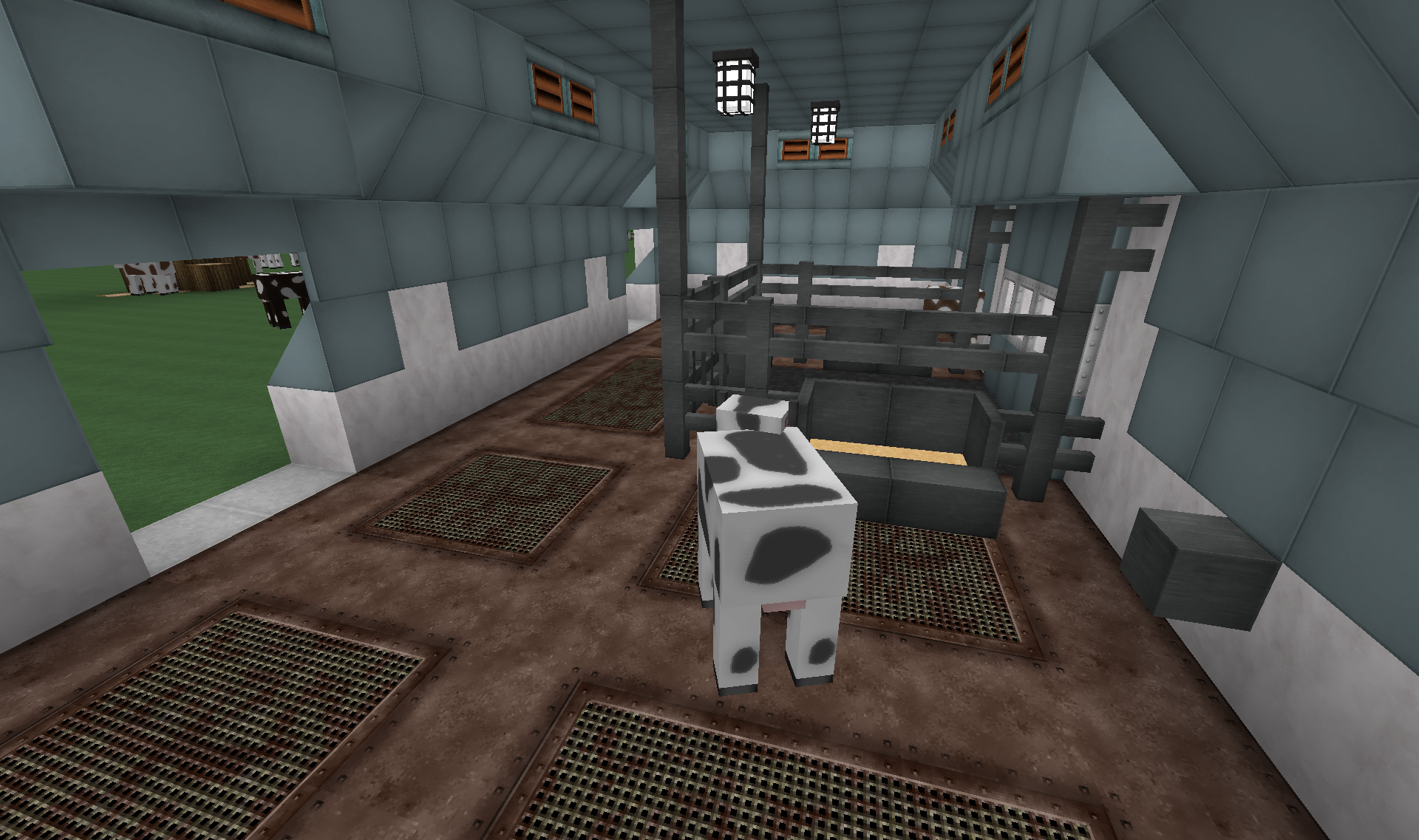 As the rest this far out from the tower, it is purely cosmetic. The cows are even CustomNPCs with minimal AI, making them respawning and not derping around like vanilla. Sadly could not find a model for the sheep in CustomNPCs, so those are just regular Name Tag'ed sheep.

Both animals and citizens need food. So very large fields of crops: 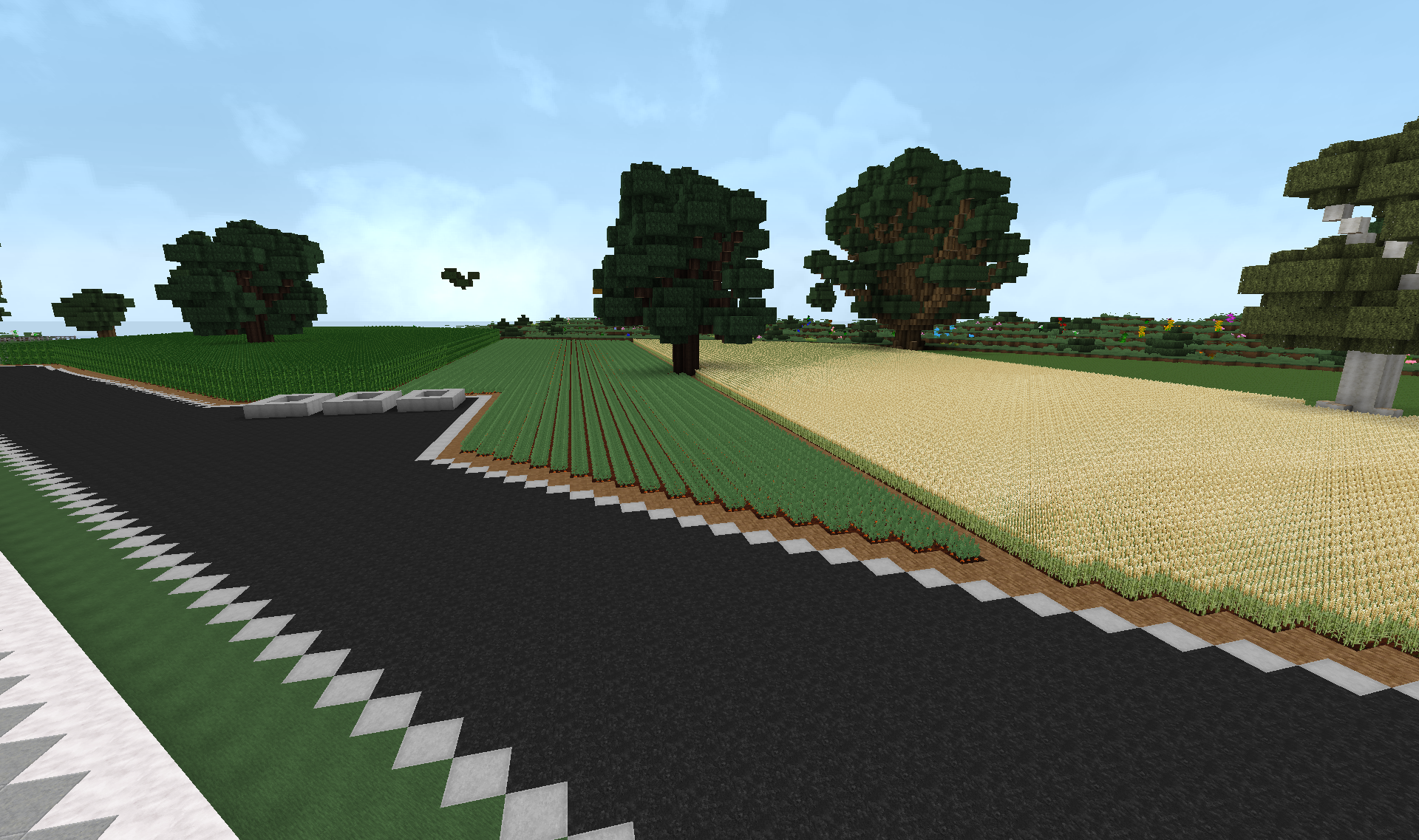 I do greatly hope they stop "ticking" when the crops are full grown If not then they are not loaded and somewhat out of loading range. Most of the time...

Finally I built a prototype of this little <roleplay some reason to have animals in smaller houses> house: 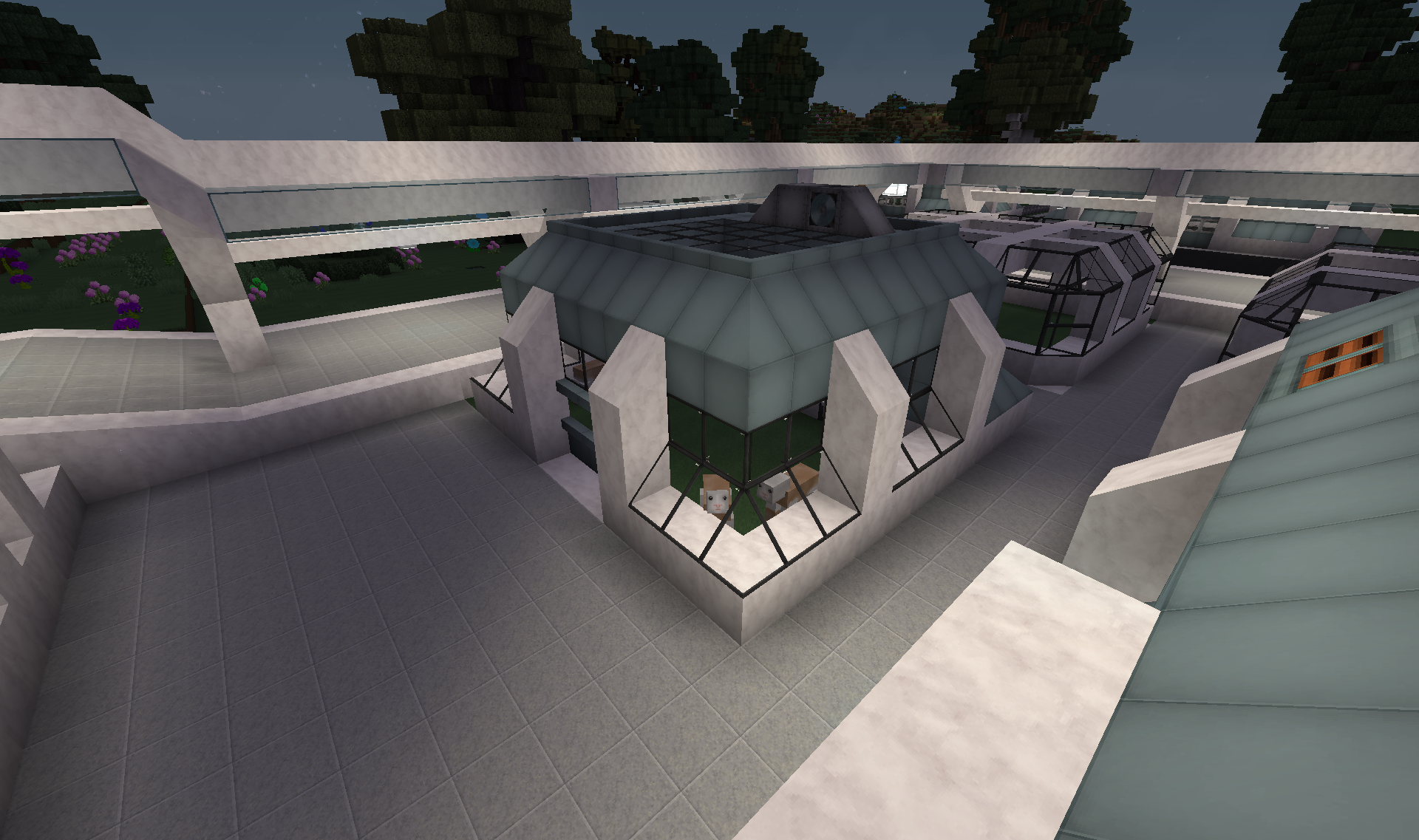 It is meant to replace the greenhouse type buildings(seen behind it) that I don't really have a use for. This one shears sheep for wool. Will probably use the others for different animals that can be sheared/milked/produce random drops.
Reactions: MikW, ICountFrom0, Hedgehog1024 and 5 others

How about if the entire area north of the river was a big industrial docks region, with huge piers out into the water. Lots of creosote wood and asphalt.... or one large mega tanker that doubles as main fluid storage?
Reactions: Celestialphoenix
You must log in or register to reply here.
Share:
Facebook Twitter Reddit Pinterest Tumblr WhatsApp Email Link
Top Bottom