A boy and a therapist. A vampire and a world. Two stories, told simultaneously. With an ending up to you.

A boy has gone to a Therapist. When the Therapist asks him to write a story about how he feels, the boy responds by writing a story about a Vampire. The Vampire has a choice. He can go the easy way, and drink the blood of those things that will not fight back. Or he can go the hard way, and not drink the blood of those things, and return to being a human. But the best way is often the hardest. You play as the vampire. You have to decide what to do.
As the boy discusses his situation with the Therapist, the story of the vampire will grow and develop. The story (and quests) will be released in Chapters, as I create them.

Being a vampire isn't easy. There's no natural health regen, so you must get your health from Golden Apples and, later on in the story, drinking blood (if you absolutely want it now, it's /effect @a 25).
There are no ores beneath the ground. In fact, 60% of the ground is composed of Silverfish. The only way to obtain ores is by killing creatures. But don't worry, it's not the dull Minecraft combat. You have the ability to use a shield and dual-wield weapons, in order for better protection. Underground is an increasingly terrifying series of spawners, monsters, and traps. But as you venture farther downward, you will find better and better loot. And meanwhile, there's the usual system of Quests helping you along.

There is also a Music Pack featured in the latest update. It contains music by waterflame89, which, thankfully, is free for use, so you won't be getting any copyright issues with your streams/videos. 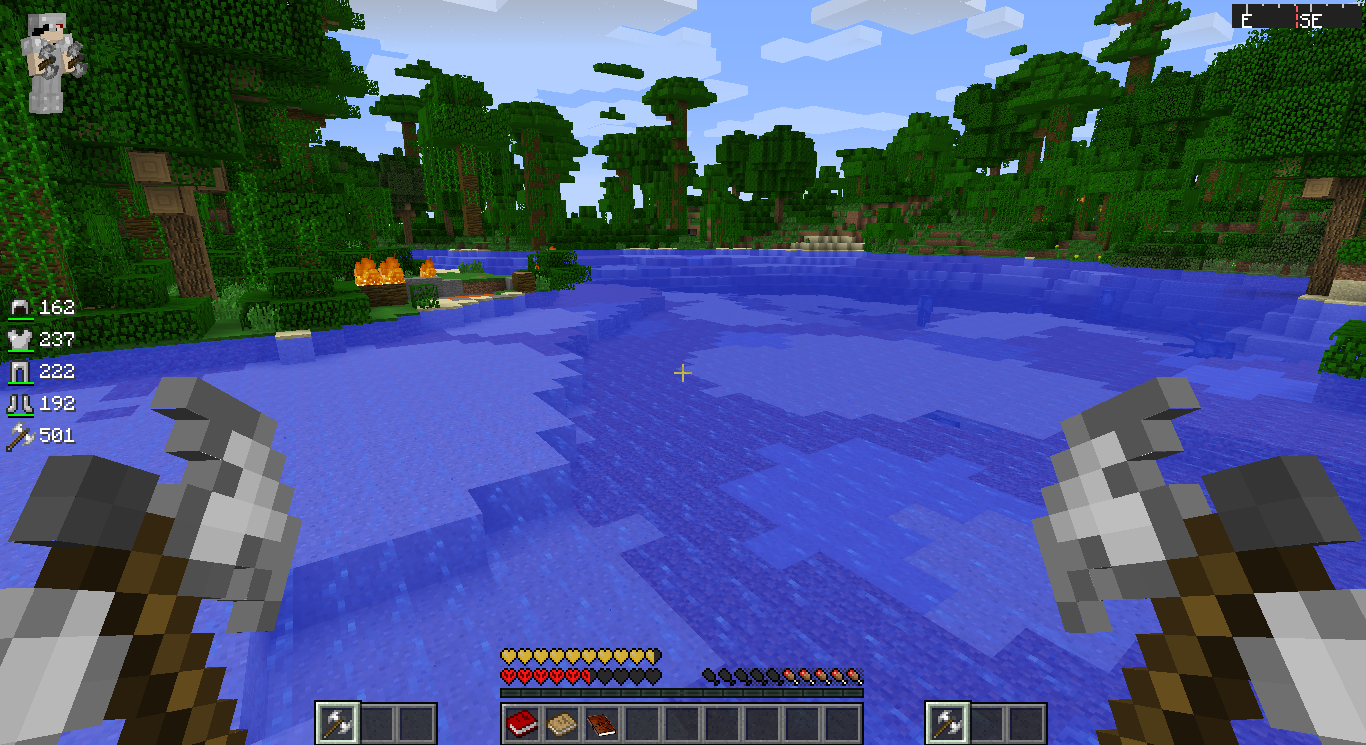 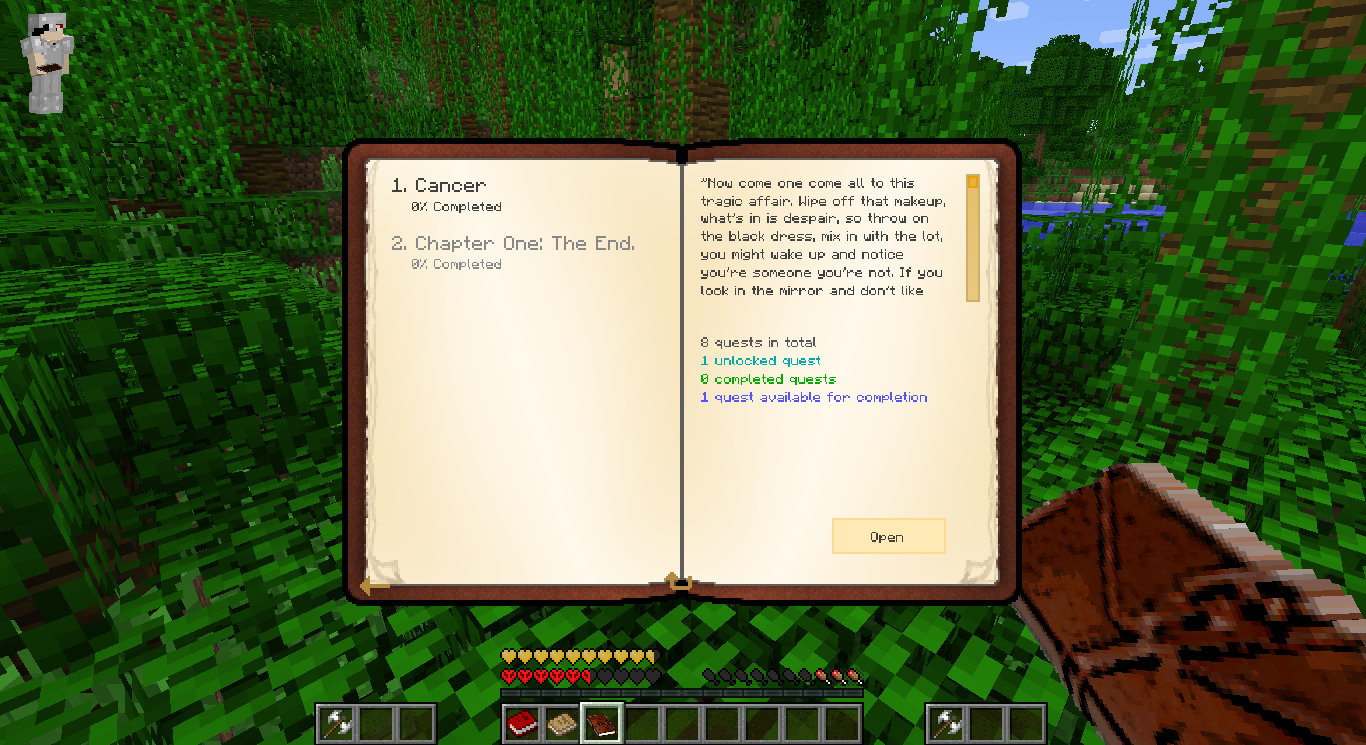 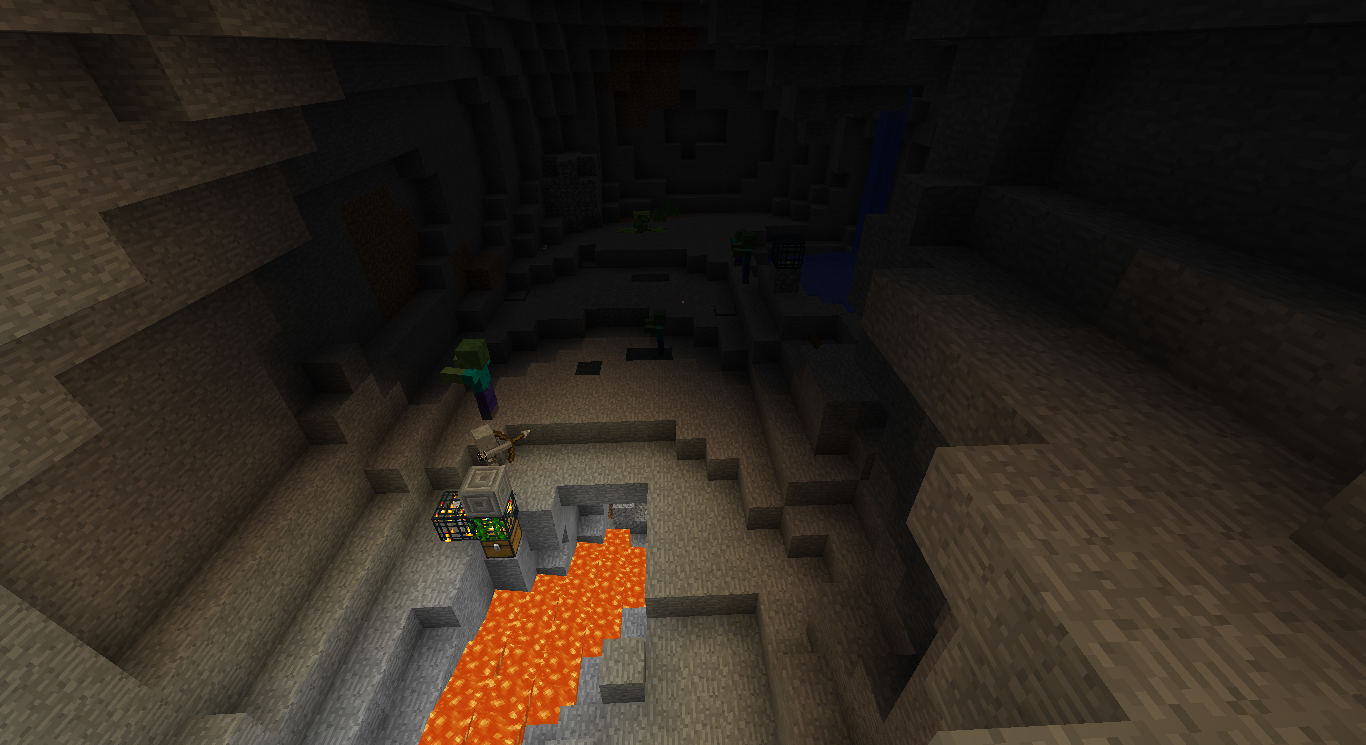 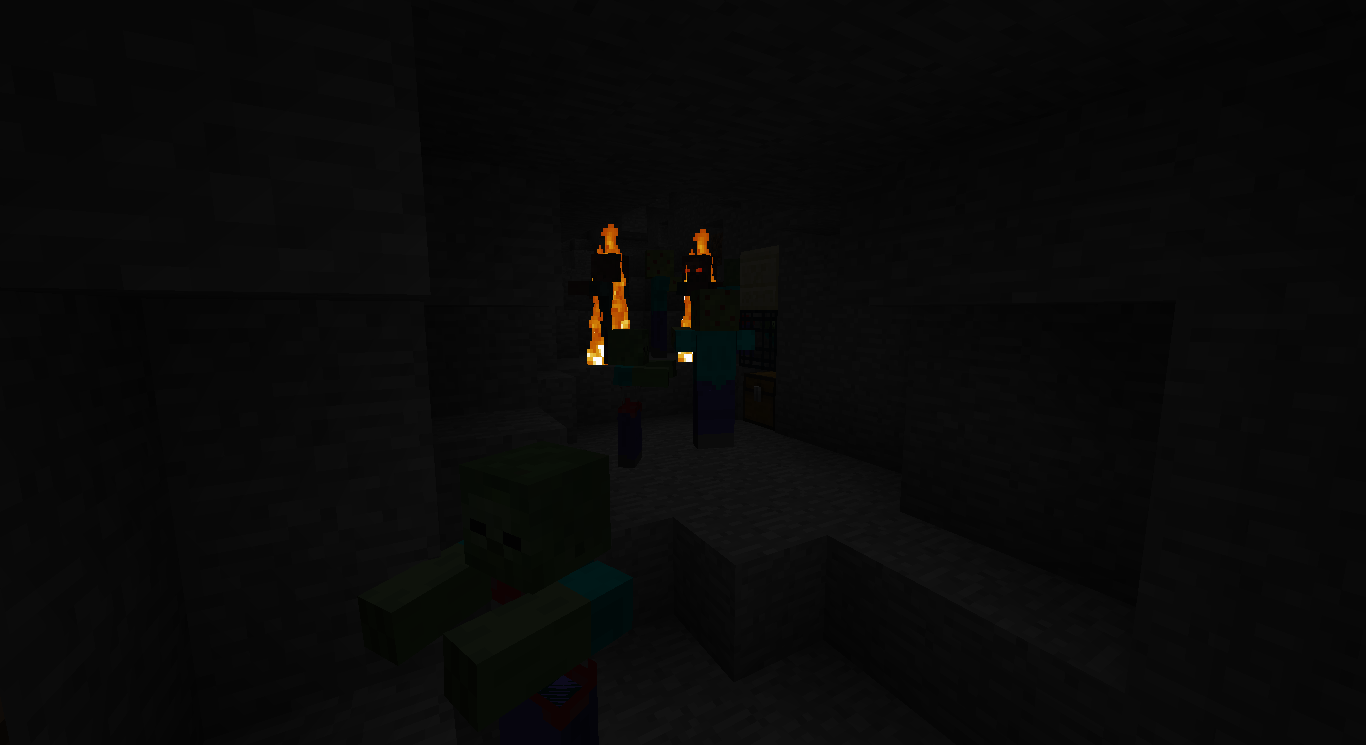 I'd firstly like to thank @Strikingwolf , for putting up with me while I forcedasked him to make several mods for this pack.
I'd also like to thank, once again, @ThomazM , @Strikingwolf , @Qazplm601 , and @SatanicSanta for allowing me to join the original PhoenixCraft server, which gave me my first experience with Blood Magic, which led to all of this.
In addition, I'll thank @Lumaceon , @CaptPanda , and @parcel31u for making the original Jampacked competition (hey, still no results!) very enjoyable and a overall constructive experience.
And, I'd like to thank @PurpleMentat for being awesome and making some of my favorite videos on Running Red.
Also, @WayofTime for making Blood Magic, which has always been one of my favorite mods.
And last but not least, @Watchful11 and @tfox83 for putting up with my constant derps in updating for the original pack.

This pack is brought to you via the Feed the Beast launcher. Installation is simple - open the launcher, and look for the "Pack Codes" button. Press it, and input the code "RunningRed2VampireMoney". Then, look in the bottom of the Third Party tab, and you'll find RRII at the bottom.

You should generate your world as Hardcore for the best experience.

This release currently only contains Chapter One, however, more Chapters will be released in the near future.

Thanks for all the venom, and enjoy.

Aaand we are now on Github! https://github.com/PhoenixTeamMC/Running-Red-2-Vampire-Money/tree/master

Our server is hosted by the wonderful ProvisionHost! Use the code "PHOENIXTEAM" to get 15% off your server!​
Last edited: Nov 6, 2015
Reactions: 1SDAN, MigukNamja, Internuntius and 14 others
P

First! and still no results...

woo ho, its out
T

w00t
Glad to finally see this out.
S

almost. Running red 3:******** ******** is the actual name [censored because gid may want put spoilers out about it in the future ]
Reactions: pc_assassin, trajing, Strikingwolf and 1 other person
N

Looks very fun! Might I suggest the Dynamic Sword Skills mod for the pack? I feel like it would go very well in this pack.
Reactions: buggirlexpres
T

Numbah90 said:
Looks very fun! Might I suggest the Dynamic Sword Skills mod for the pack? I feel like it would go very well in this pack.
Click to expand...

It is.
I hope you like DF-type fun.
Reactions: buggirlexpres
S 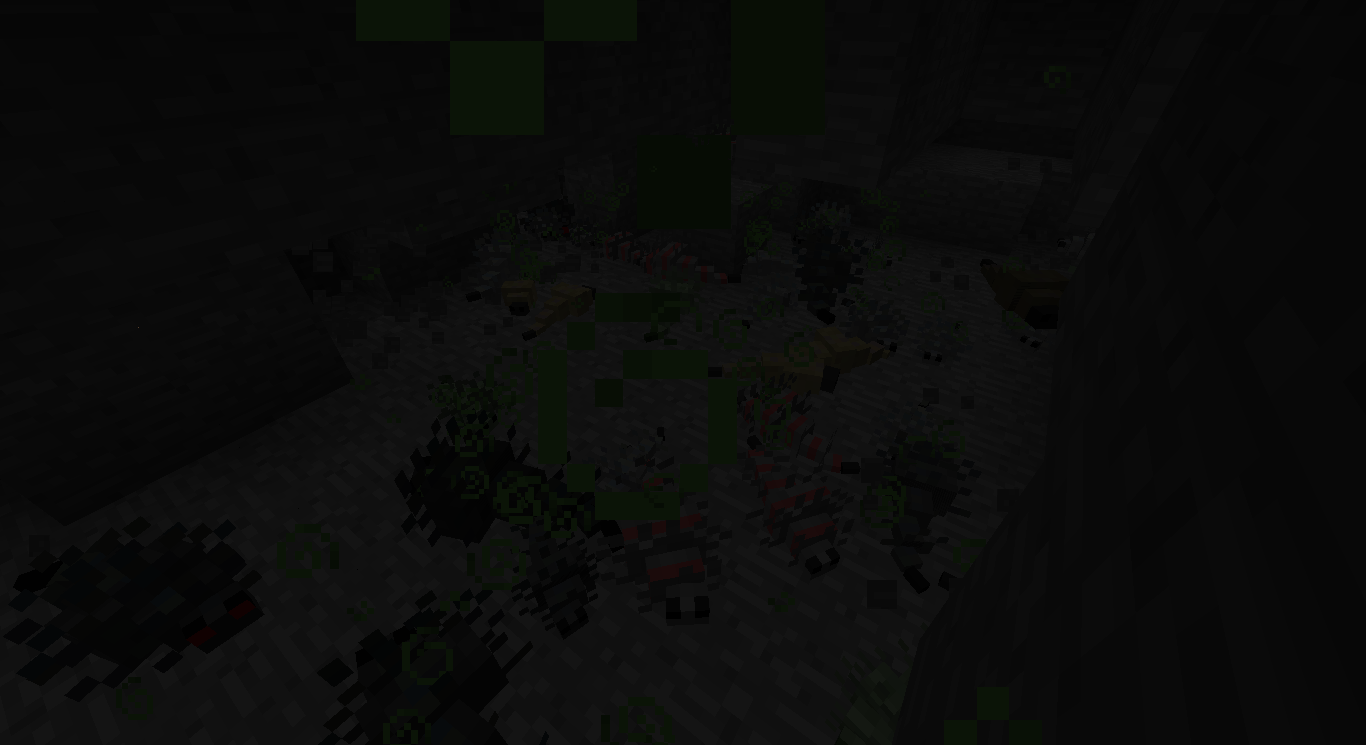 Its like you don't want me to try this pack
B

so is there a chance of reward bags dropping off of all kills?

Bearnado123 said:
so is there a chance of reward bags dropping off of all kills?
Click to expand...

DF-Style fun is best described as "losing is FUN!" or "dying is FUN!", or "clunky ui in an era where shitty controls are not needed anymore anywhere but horror games where it makes you feel weaker in is FUN!".
In short, suffering is fun, if you like DF-Stle fun. DF of course meaning Dworf Fortress.
As opposed to Dark Souls level fun; insane learning curve that challenges you no matter what you do or how powerful your gear is, but dying is a annoying setback at most, usually.
Reactions: Sempuh
You must log in or register to reply here.
Share:
Facebook Twitter Reddit Pinterest Tumblr WhatsApp Email Share Link
Top Bottom