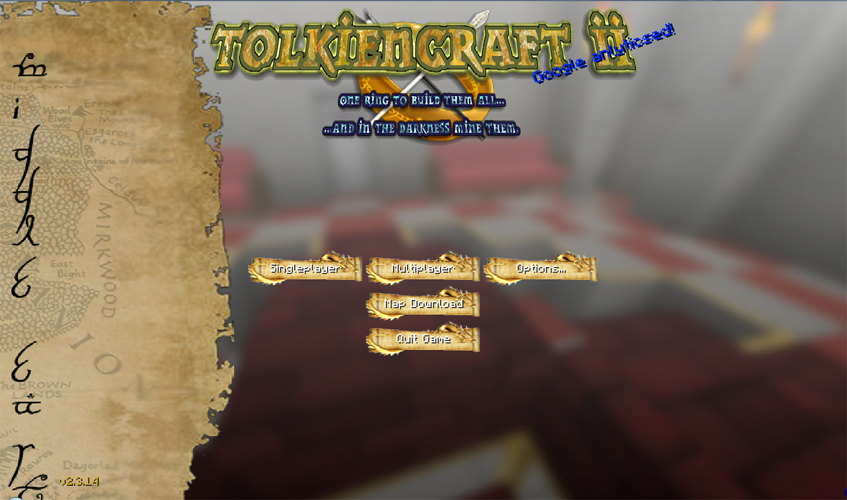 Draconis is in danger. You arrive just as the call for help is sent across the land by the king looking for able-bodied citizens to join the guard to help with monster attacks that are on the rise!

Journey through a town that is thriving and interactive. Help the merchants out with tasks and slowly uncover the darker side of what is happening here and ultimately try to bring peace back to this troubled land.

Combining CustomNPC's and HQM for a true MMO experience, you will talk to npc's, kill bosses and adventure in the land of draconis in ways you have not yet experienced in a modpack!
Currently the only modpack to utilize the customnpc mod AND HQM together and featured on the customnpc website!

In an homage to the world’s of Tolkien(no ic2 here!) I have put together this modpack to bring back adventure to minecraft. Centered around a magic and low-tech theme, you can choose to become a farming magnate or travel to middle-earth and strive to be a powerful warrior or mage or even get married!

There is variety in the overworld as well! With Biome’s ‘O Plenty you will not only have a wide range of lands to visit and explore, but you will also have variety with Ars Magica, Roguelike Dungeons, and MineCraft Comes Alive. The adventuring has just begun!

Still not enough? Not only will you have access to all the overworld biomes and features but with Witchery and Extra Utilities you will have access to exotic dimensions to explore as well!

So have fun and enjoy the Fantasy world of Middle-Earth!

Yes, that's right, all the love and openess of standard modded minecraft with an MMO feel!

I do ask that anyone playing keep these things in mind:
You will need code tolkienadv2 to download from the FTB launcher.
Currently the recommended version released is 2.9.5 for SSP and SMP.
Now with an un-official, official texture pack! Head over to BDCraft to check it out!

Also now with more server! This is limited to 10 people. Thanks to a partnership with the guys at Aim2Game!. If you are interested in using them as your minecraft host you can use promo code GO25 for 25% off of everything they offer for as long as you are a customer or GO50 for 50% off your first month!

What this means for players: Nothing, existing worlds will not be affected any differently than when the map is included. You will still handle updates normally, only now one extra step of downloading the map separately. I will also be including a button on the main menu as a direct link to the download location.
———————————————————————————————————————​
Special thanks to the following:
Davici
EpicQuestz
TrixyBlox
For all their hard work and willingness to share that work with all of you, show them some love!

Courtesy of @Vals NoisyToys - Instruction for transferring between map updates.

Update Process (Primarily migrating from version prior to 2.2.x):

While I am still adding quests over time, this pack is considered stable at this point with a server version now currently being worked on.

Check back here to see all of the great things the new pack will bring!

Looking forward to any input and experiences anyone has with this pack!

Awesome! I'm so glad you came out with a sequel!
Reactions: GreatOrator
G

Work progresses and the map, for the most part, is complete. But then, as builders are we ever truly "done" decorations, niceties, those things that really make you go wow when building.

As of now I have begun working on the other major feature of this pack though there are almost 2 dozen pics available now, will probably start adding more tomorrow of some of the other "stuff" and may even begin to leak out...oh heck, why not....

So a bit of a teaser, first, this is NOT a skyblock map, second, I have taken the adventuring line I had with the first modpack and am really working to make the a true function this time around.

Thank to those of you who are showing support, definitely motivates me to want to keep going!
Reactions: SirAkintosh
G

2.0.1 Beta has been released to the FTB launcher! Have at ye all who enjoy adventure and report back your findings!

critique, so far lovely world and map. problems I see from my perspective. the world is in creative, the edit NPC (or whatever it is, I'm not a dev and would hate to be 1) is active. quests few I've done are no problem. otherwise good going and good luck.
Reactions: GreatOrator
G

deanec64 said:
critique, so far lovely world and map. problems I see from my perspective. the world is in creative, the edit NPC (or whatever it is, I'm not a dev and would hate to be 1) is active. quests few I've done are no problem. otherwise good going and good luck.
Click to expand...

Thanks for the feedback!

CustomNPC's only allows ops only or open access (which wouldn't be an issue in SMP, only in SSP) unfortunately. I forgot to edit the map to be survival, so I appreciate you pointing that out.
D

GreatOrator said:
Thanks for the feedback!

CustomNPC's only allows ops only or open access (which wouldn't be an issue in SMP, only in SSP) unfortunately. I forgot to edit the map to be survival, so I appreciate you pointing that out.
Click to expand...

um hehe how can I get it in non op mode then? I did set Gamemode = 0 though which should have switched it right? I could try to de op command (I think cheat mode/open to lan should do that right?)
Reactions: GreatOrator
G

deanec64 said:
um hehe how can I get it in non op mode then? I did set Gamemode = 0 though which should have switched it right? I could try to de op command (I think cheat mode/open to lan should do that right?)
Click to expand...

Well, I'll have to do some testing on my end for that, but I believe I will have to nbt edit the level dat to show it is survival. If cheat mode is on, by default it still allows all "admin" commands in single player so you would still technically be op. But, if in survival mode for the NPC's they should function normally as long as you don;t use any of the NPC tools from the mod, at least it did in my testing

What specific behavior are you seeing? Is it from the NPC's or in HQM?
D

edited again if this was survival npc pather, and other such items should be deleted right?
Last edited: Sep 5, 2014
Reactions: GreatOrator
G

Personally I am kind of a fan of the old wheel-based interface but waiting to get some votes on that one. The current one is indeed more RPG-esque than the wheel, but we'll see.
D

So tonight I will be finishing off the HQM quests that are currently non functional and getting the bags set up finally so there are actual rewards finally.

I also have some other ideas for quests for the customNPC's so time willing, there should be a bunch more available in an update in a few days, on my weekend from work (YAY!)

If you have any flashes of inspiration for quests you would like to see, please by all means let me know and if I do add it (them) I will list you in the credits!
D

I actually had considered it, but as of the beta 20 LOTR update he added quests built into his dimension, BUT, always open to some possible boss encounters in the overworld (trying to keep map size as small as possible considering, so I have avoided putting anything in other dimensions)

Upside is, all the reward bags are done, for now, never really satisfied! lol

Started on hqm to finish of the third category and will try tro get started at least on the mages in the tower. Kinda at a standstill briefly there because of waiting for ars and mystcraft
D

hey was just exploring in game and there seems to be 1 issue namely, I can break any blocks it seems as if its in adventure mode.
Reactions: GreatOrator
G

Now that is news. I haven't set any flags to make it that way. I tested with a test account I have. Are you sure you are in survival? Also, there are a couple of areas I have specifically protected some blocks to avoid someone accidentally breaking into an area I wanted to make sure it stayed sealed until the right time.

Can you post a screenshot of the area this is happening in?
D

actually its pretty easy. the roguelike dungeon near the magic tower. ALL blocks and such in it that I can find. the world was set to Gametype=0.
Reactions: GreatOrator
G

AHHHHHHHHHH, now I see what you are talking about.