Tried this seed after that w/the _1395.jar file, Ubuntu server, with somewhat different results - see edits to original post.
Last edited: May 13, 2015
A

Need help with a seed. I'm playing Infinity 1.5.1 with BoP. I wanted something with a desert and magical forest biome nearbyish. Any kind of desert will do (cactus for Buildcraft) and magical forest (preferably with some silverwood trees) for beans. Can't find anything. Is this such an unusual requesdt that nobody ever posted one (that I can find)?
A

Spawn on a desert biome about 50 blocks away from a magical forest.

Update: I created a new world to test the seed and see if I gave you something legit, or if I need to review info. Game crashed to desktop. This has happened before with seeds I tried. It shouldn't be a problem. Just launch the game again and you will be able to enter the new world.

Found this gem on Feed The Beast Ultimate 1.4.7 after days of searching, I must've looked at easily 300 seeds or more before I came across this one:

MODPACK: Feed The Beast Ultimate 1.4.7
SEED: 111605477282096095
GENERATOR: Default
COMMENTS: Uses the default settings in the ExtraBiomes config file. No need to change anything to enable/disable certain biomes.
WHY USE IT: The best-looking spawnpoint I've seen in a long time, awesome lake, very nice cliffs, perfect for bee breeding because there's a jungle, desert and taiga nearby. I also used AMIDST and there's plenty of land mass to explore so you're not stuck on a stupid little island. 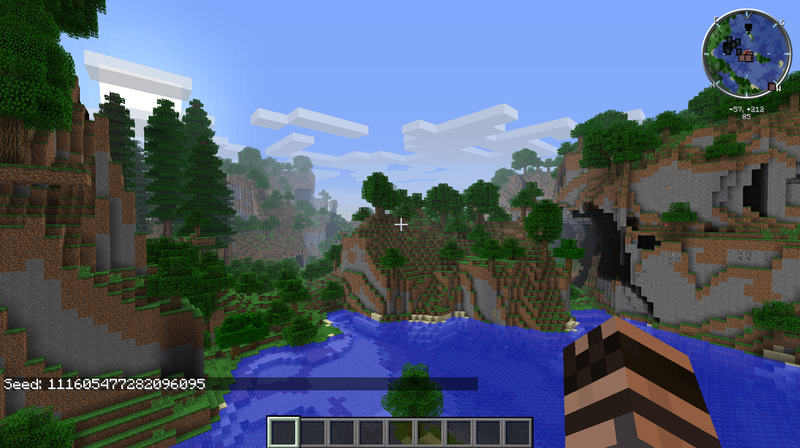 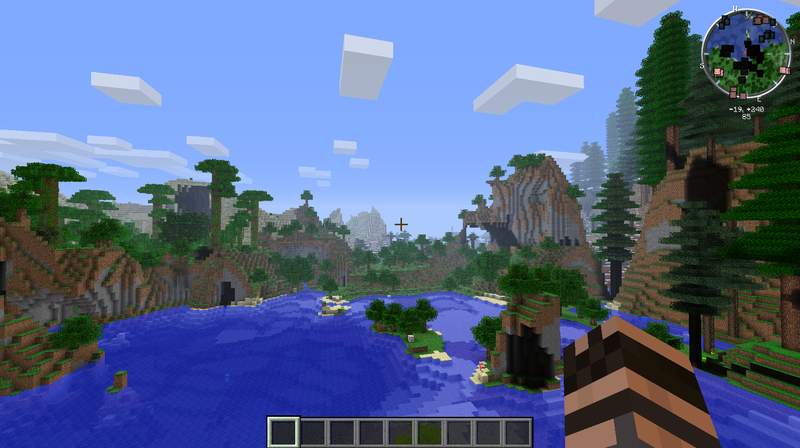 Edit: This reads as kinda sarcastic, but I actually did boot up FTB Ultimate
Last edited: Jun 10, 2015
Reactions: TheMechEngineer
A

Edit: This reads as kinda sarcastic, but I actually did boot up FTB Ultimate
Click to expand...

Ultimate is awesome, people ask me why I don't play the new stuff and generally I just have no interest.
There's nice stuff in the newer packs but I love the nostalgic factor.
L

Hey! Just recently started playing the CrackPack 1.6.4 again. Does anyone have a seed where (you don't HAVE to spawn on it) there is a small - medium sized Magical Forest Biome island thing in the world??
L

LachlanMac84 said:
Hey! Just recently started playing the CrackPack 1.6.4 again. Does anyone have a seed where (you don't HAVE to spawn on it) there is a small - medium sized Magical Forest Biome island thing in the world??
Click to expand...

Generation Type: Biome's O'Plenty Or however you spell it.
Not sure if it matters for the seed, but I am playing the 64-bit version but I am pretty sure its required to even activate the modpack.

List of things of note, Many large villages within a part of the map within 1000 or so blocks, one village is on the top of the mountain only a few buildings and has a wall. A good place to set up if you can locate it, if its your kind of thing to take over a village and kill everything in it. The wall is proper and useful, the Well spawned just under the city gate, which makes for a good trap for mobs to keep them from entering. So long as you find another method.

There are two Temples within the Jungle near the spawn, I believe one of them spawned a Portal gun, but with care you can get 4 randomized Safari Balls, meaning if you use it in an autospawner you get random spawning monsters. Which if that is your thing its going to be useful, A division Sigil is found either in one of the towns or in the Temple, I don't remember. It could have even been found with the Triple Whisp spawners, there is also a number of either zombie or skeleton spawners under the straw mans as well as two sets of duel witch spawners, so with the portal gun and all these spawners you could mostly get some kind of farm started easy.

I believe if done properly, you could just make a simple drowning room for all the monsters set up hoppers and you will get, resources moving about with a drowning going on. But figuring out how to turn it off or deal with overflow might be hard. But if you can get the 3 Whisp spawners and a File cabnet or something of that nature setup This spawn number could be useful. Because it could be used to keep all the drops from the whisps.

I should also bring up their is a desert and a Mystical Forrest within a short distance of spawn along with a Lavender Forrest and a few other things. A Bamboo Forrest near the Desert, you should be able to find an Apple Tree Sapling pretty fast as well as Berry bushes. Also by going down a hole not far from one of the Temples and digging into the caves I had already come up with enough Exp Bushes to take up the space of one end of the village person's house I had decided to take ownership not far from the Meteor or at least one of the Meteors within a good area of the spawn. I hope people take a look at the seed explore it maybe take screens shots to post of what I point out and let me know if they like the seed or not.

Spawn is in the middle of a large Jade Cliffs biome, so you spawn right next to a lake that is surrounded by nice mountain terrain.
About 100 metres away is a Redpower volcano and a large walled village, both up high in a Mountain biome.
Nearby biomes include a (small) Quagmire, Wetland, Redwood Forest, Prairie, Roofed Forest, Sludgepit, Extreme Hills, Lavendar Fields and Orchard.
A Slime Island is 300 metres to the East of spawn. 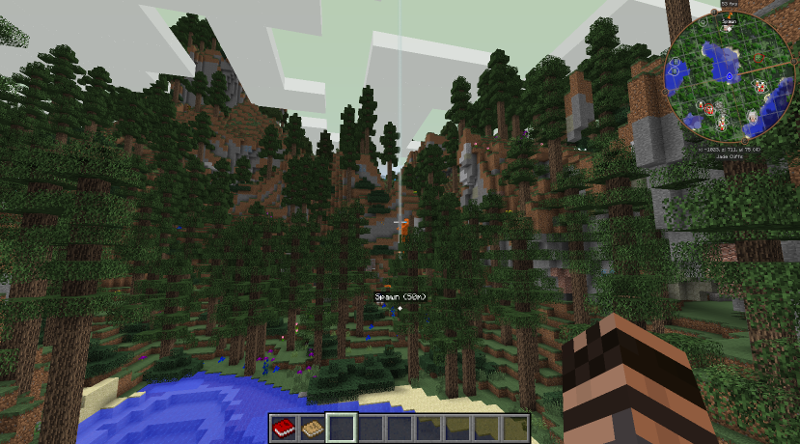 Has anyone found a seed with a barley field in FTB infinity 1.7.10?
B

I found a rather nice seed for FTB Infinity 1.7.10 and Biomes O Plenty:

Check it out and see for yourself

Challenge: build your base under that overhang. If it ever collapses, your game is over.

Not seen any jungle yet but other than that it's a nice selection of biomes.
Last edited: Oct 6, 2015
Reactions: guiguilyon and Master_Builder_800

Hm, this is weird, there's a Thornlands at 0,2000. I thought the twilight biomes in overworld problem was fixed ages ago.
Reactions: Master_Builder_800
D

Starts you off on a small island that has a few trees. In the distance are other islands.

Pros:
Do to the size of the island it is fairly easy to light it up. Light may not even be needed. I didn't test that.
The small islands are not close. Yet they are in reach and do contain some resources.

Cons:
The resources that depend on land are scarce.
Biome dependent resources are scarcer.

Normally I will load worlds until I get one that fits my preferences. Usually I would delete the world if I spawned on a island. This one looked to nice a opportunity to pass up though. So far I haven't been disappointed. Played for two hours and have found both types of rubber saplings, and a extremely small village.

Hey, anyone know of a Garden biome seed in FTB Infinity?
G

Fortanono said:
Hey, anyone know of a Garden biome seed in FTB Infinity?
Click to expand...

Ah. I've used commands to get essence specific to a biome before, here's that. You can get your biome ID by dumping the list of IDs from NEI

(Go to NEI options/tools/data dumps/Biomes/Dump button. Find the generated file in "minecraft/dumps" folder. Open the dump.csv file, search (ctrl+f) for the name of the biome you want, note the id (left column) corresponding to it. Put this ID where the ### are in the command below when in-game (creative).

/give @p BiomesOPlenty:biomeEssence 1 0 {biomeID:###} (replace ### based on the biome ids your world uses)
Click to expand...

Once the specific biome radar is done, right click it in the air, then hover over it in your inventory to see the coordinates of the biome you want. Then teleport to it. Then you can change the default spawn of the world to spawn there.
Reactions: DeathOfTime and PhilHibbs
D

I don't know if this will get the same results every time. Has worked twice for me. I started off on or near a island. I wait less then a minute. A meteor strikes down right in front of me. Taking out half the island.

I haven't looked at the rest of the save yet. This was awesome enough to report on its own I though.

I don't know if this will get the same results every time. Has worked twice for me. I started off on or near a island. I wait less then a minute. A meteor strikes down right in front of me. Taking out half the island.

I haven't looked at the rest of the save yet. This was awesome enough to report on its own I though.