Created an account to post this.
When looking simply for somewhere to download the necessary files to host a server on my personal machine, why have I had to jump through so many dang hoops? I've been looking for the past 30 minutes just for a dang download link.

And I look on the wiki, and I literally see this:

So after more googling I finally found the link, and I figured I'd try to make it easier for the next person and update the wiki. 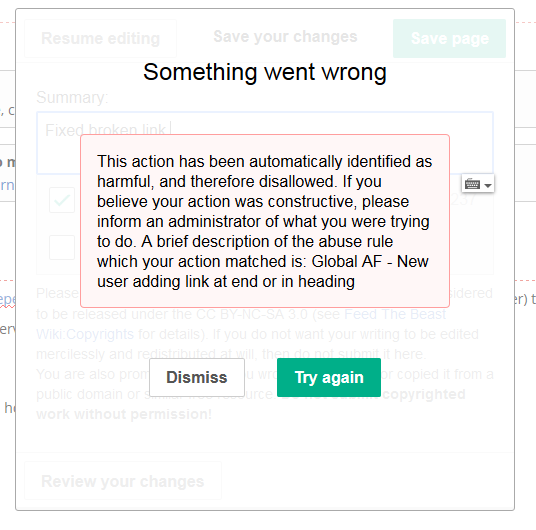 Someone please update the freaking wiki to make it easier for the next guy.
The correct link is <snip, this is the wrong place>
And please consider posting a download button on the main page of the website. I had to freaking dive into the rabbit hole to wonderland just to figure out where to download the dang server.
Last edited by a moderator: Aug 26, 2016
Reactions: boballama

Jack of All Trades

for server downloads see: http://support.feed-the-beast.com/faq/#dlServer (I removed the incorrect link from your post to save confusion)
Reactions: boballama
E

On my FTB launcher, there is a button that says Download Server....This has always worked for me.
Reactions: Robijnvogel
S

What article on the wiki did you look at?
Reactions: Robijnvogel
E

SatanicSanta said:
What article on the wiki did you look at?
Click to expand...

I am asking OP so that I can go update the article, not learn to set up a server
E

SatanicSanta said:
I am asking OP so that I can go update the article, not learn to set up a server
Click to expand...

Ok, I was just adding to what I said previously in case anyone elese looks at this thread.
Reactions: SatanicSanta
D

downloading the server pack is vastly easier. Still not the only answer. It is possible to create a server with any pack instance.

This setup will, likely, crash repeatedly. '
To stop a server type "stop" in the terminal for it. As a extra precaution I usually type in "save-all" before that.
if you want to enable cheating for specific server goers then typing "op minecraftID" in the server terminal will allow them to do that. Replace minecraftID with the actual users id.
a lot of the other stuff can be found on the official minecraft wiki.

this is mostly how i get it done. there are errors in here of course. Anyone the least bit uncomfortable with learning, or troubleshooting should likely get someone else to run the server, or at least let them set it up if it is disconnected from the net by a firewall. I feel this is try of any game server though. Especially ones that players from the net can get on. If you plan on letting any one else on the server it would be a good idea to learn about server security(something I should actually put more effort into learning actually).

edit: sorry, wasn't looking at the location of this thread. Should have really paid attention to that.
might have been referring to this page: http://ftb.gamepedia.com/Server_Guide . it does have the dead link in it.
Last edited: Sep 6, 2016
Reactions: ICountFrom0 and SatanicSanta
B

Quetzi said:
for server downloads see: http://support.feed-the-beast.com/faq/#dlServer (I removed the incorrect link from your post to save confusion)
Click to expand...

You do realize that the "+ 1 more" button is not intuitively obvious. I too went down the same path that the OP did. In fact I have gone down it two or three times this last year or two. Please make the server files more visible.
B

But FTBLauncher is being deprecated and some of us our wanting to learn how to download our server files through the new Forge-sponsored methods before FTBLauncher goes away. Also it is not clear from the FTBLauncher what version of a modpack's server files are actually going to be downloaded. For example the server files for DW20's 1.10.2 modpack shows that FTBPresentsDirewolf20110Server.Zip is going to be downloaded. This is the same filename as the version I downloaded 2 weeks ago. It isn't until after this download has completed and you take a very close look inside can you tell that it is actually the 1.1.4 version. Whereas after clicking on the "+ 1 more" entry for this modpack it is very clear that you are going to be downloading the 1.1.4 version. That alone is more than enough incentive for me to use the server downloads available on feed-the-beast.com--once I find it anyway.

Jack of All Trades

boballama said:
You do realize that the "+ 1 more" button is not intuitively obvious. I too went down the same path that the OP did. In fact I have gone down it two or three times this last year or two. Please make the server files more visible.
Click to expand...

We (FTB) have made our feelings on the visibility of the server downloads known, making the process easier from within Curse is one of the features that needs to be in place before we retire our launcher.
Reactions: Robijnvogel and jikuja
You must log in or register to reply here.
Share:
Facebook Twitter Reddit Pinterest Tumblr WhatsApp Email Link
Top Bottom