You are using an out of date browser. It may not display this or other websites correctly.
You should upgrade or use an alternative browser.
F

Alright, I see everybody here survived the trip to the front. Good work on making it this far. Now, I have a few announcements to make. I’ll start with the bad news, then get to the worse news, and finish with the horrifying news.

First off, Colonel Meow is dead. Somebody shined a laser pointer into no-man’s-land, and the Colonel went straight out there to chase it. The enemy saw this, and promptly shot him. This is exactly the reason he banned laser pointers.

Secondly, Major Squeakers will be taking over. He’s most senior, and despite his lack of any language skills, you are to follow his orders to the letter (or pawprint, really, whatever he’s able to write). As his first order, the Major has ordered all soldiers to report to their battle stations by this time. This will mark the end of your day! 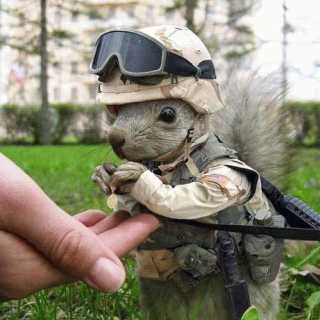 Lastly, we are treated the Colonel’s death as foul play. This means that some of you are probably spies from Arachnia who have come to spread terror among our brave soldiers ranks. YOU WILL NOT SUCCEED. PROBABLY.

To combat this, the Major has decided to institute a lynch. Every day, all the soldiers will vote upon who the thing is the spy, and the person with the most votes will be dealt with.

If you have your informational packets, please consult them for any questions. If you don’t more can be found here.

Your jobs will be sent out shortly.

If I'm forgetting anything, please let me know. You probably won't be executed. probably

We are hoping for more reinforcements to show up, we'll see if Battalion CP comes through on this.

There is no nobody. Clearly, somebody killed Colonel Meow, and this person must be brought to justice.
Reactions: Lethosos and Shazam08
S

vote heilmewtwo because he has a vote on him and i hope he dies.
T

To clarify the maniac - They do not stay the maniac. They will be given two role conversations, one of which is correct. They will have the win condition of the correct role. The other conversation is essentially meaningless.

Luckily, the maniac did not role maniac as one of the two roles. That could have gotten confusing fast.
H

Pyure said:
vote heilmewtwo because he has a vote on him and i hope he dies.
Click to expand...

Major Squeakers, I don't think it's wise to reduce our numbers like this during a war...

Fraction2 said:
There is no nobody. Clearly, somebody killed Colonel Meow, and this person must be brought to justice.
Click to expand...

Are you sure it wasn't Nobody that killed the Colonel? Nobody can be sneaky like that.
S

SoraZodia said:
Major Squeakers, I don't think it's wise to reduce our numbers like this during a war.
Click to expand...

What's this, man? You dare question the Major's methods?! Who do you think you are?
D

So. Since pyure got lynched D1 we stopped trying to I see?

Thats.. Interesting.. Anyhow. Who would be the one killing Colonel Meow.. One that wanted his position.. Another.. Cat..
Vote SpwnX

I'll antismite Vike because he looks like he needs antismiting.
L

No nobody? Welp. Vote Pyure

ljfa said:
No nobody? Welp. Vote Pyure
Click to expand...

I'm kinda impressed we got this far w/o voting me on a no-vote-nobody game
Reactions: Lethosos, Fraction2, dylanpiera and 1 other person
V

I can't start the antismite round without voting RJS, can I?
Reactions: dylanpiera
D

@Fraction2 Major Squeakers just gave me the order to tell You! to make a vote tally!
If you'd be so nice ofcourse
F

Do not : this represents number of people voting for each person, not the number of votes they have. (The) Officer(s?) votes will count as two in the final tally, and this will be represented in the final count.

But thanks to the way this army works, our Officer (s?) remain anonymous, because that's clearly the way the can best issue orders to the troops!