I thought I'd give Project Ozone 2 a whirl, being as it's a "all the mods" without needing to worry about survival (that much). Note I did remove epic siege mod and did personally cheat a couple of things (especially the seed cross breeding, RNG was doing my head in and was stopping my progression!)

Overview shots - this is basically my spawn. The wooden hut was originally my dirt hovel on day 1, right on the cliff edge. I secured a small garden area to start progression, then slowly expanded out. Got bored with my bad RNG on manual sieving, so had to start with redstone seeds to be able to progress to getting any sort of machine stuff. The different towers are for my magical crops (still to be fully automated), and the big building is my sieve/cobble/lava resource gen. 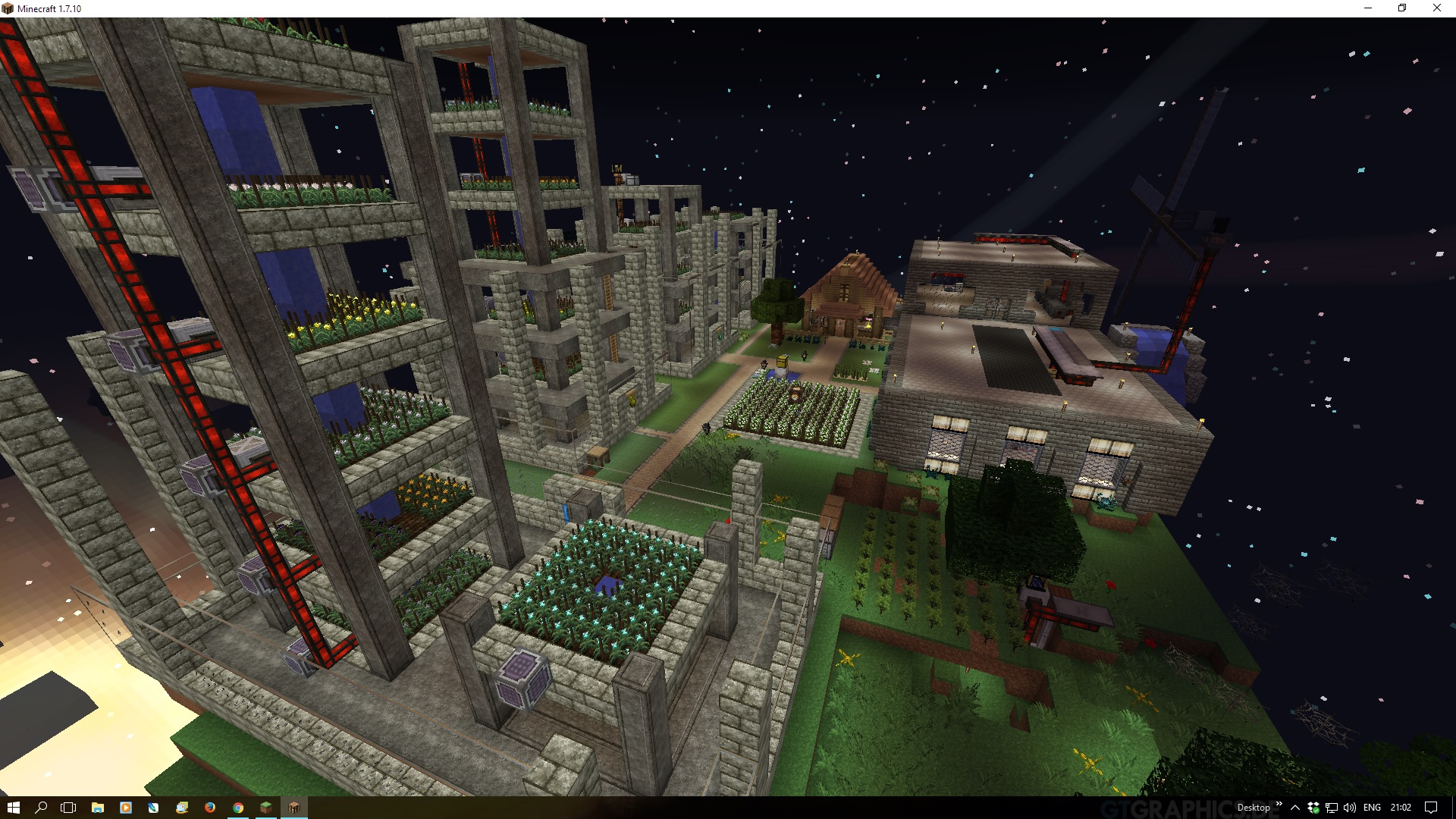 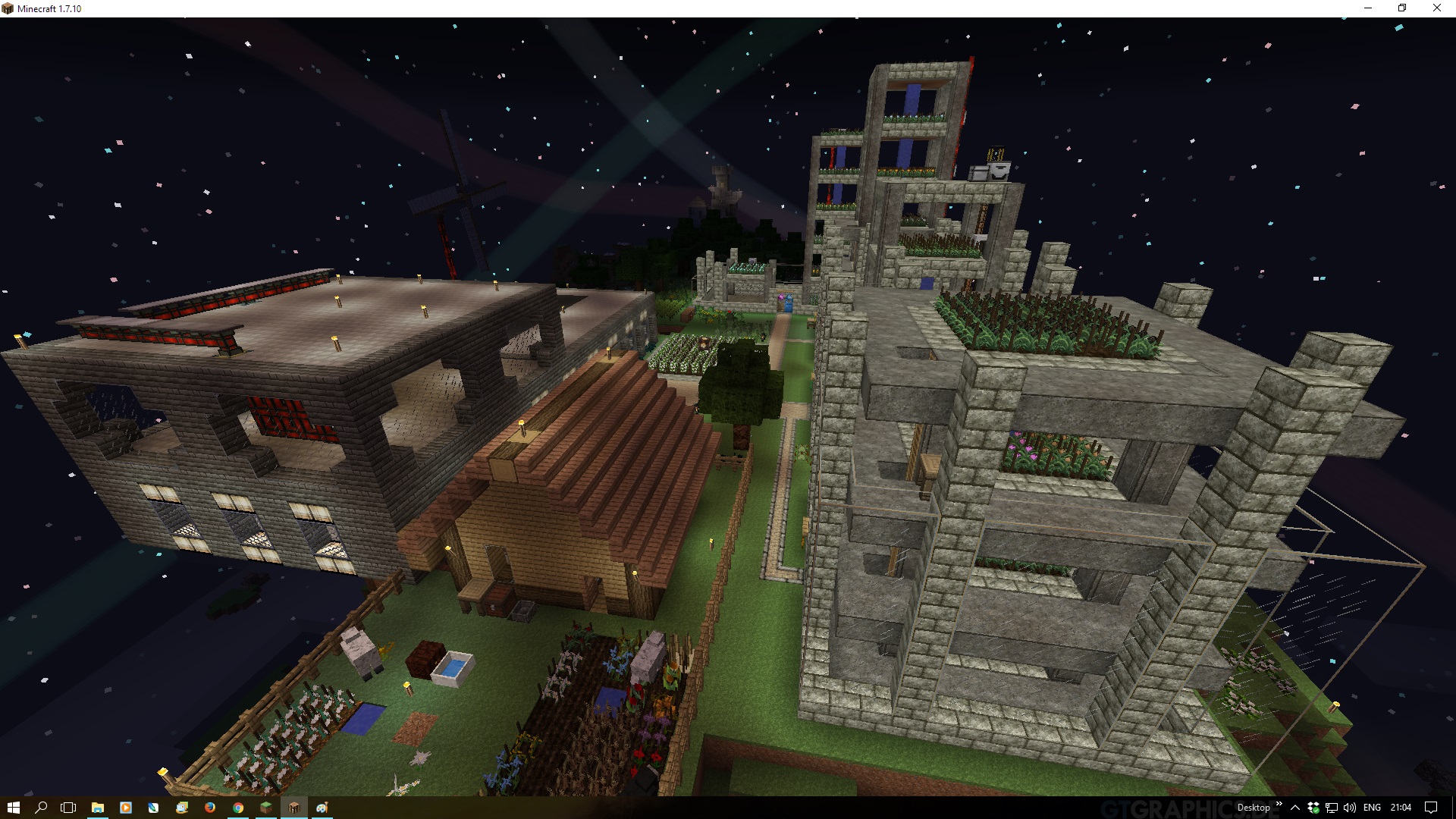 My mob dark room - very simple, will make it cursed earth eventually. All the crud from this mob farm, plus most quest rewards and lootbag contents are stored here, with the decent stuff filtered back to main base. In the room underneath is a little system for combining lootbags to their next tier, an opening system, and then a system to melt down metal tools, armour, etc 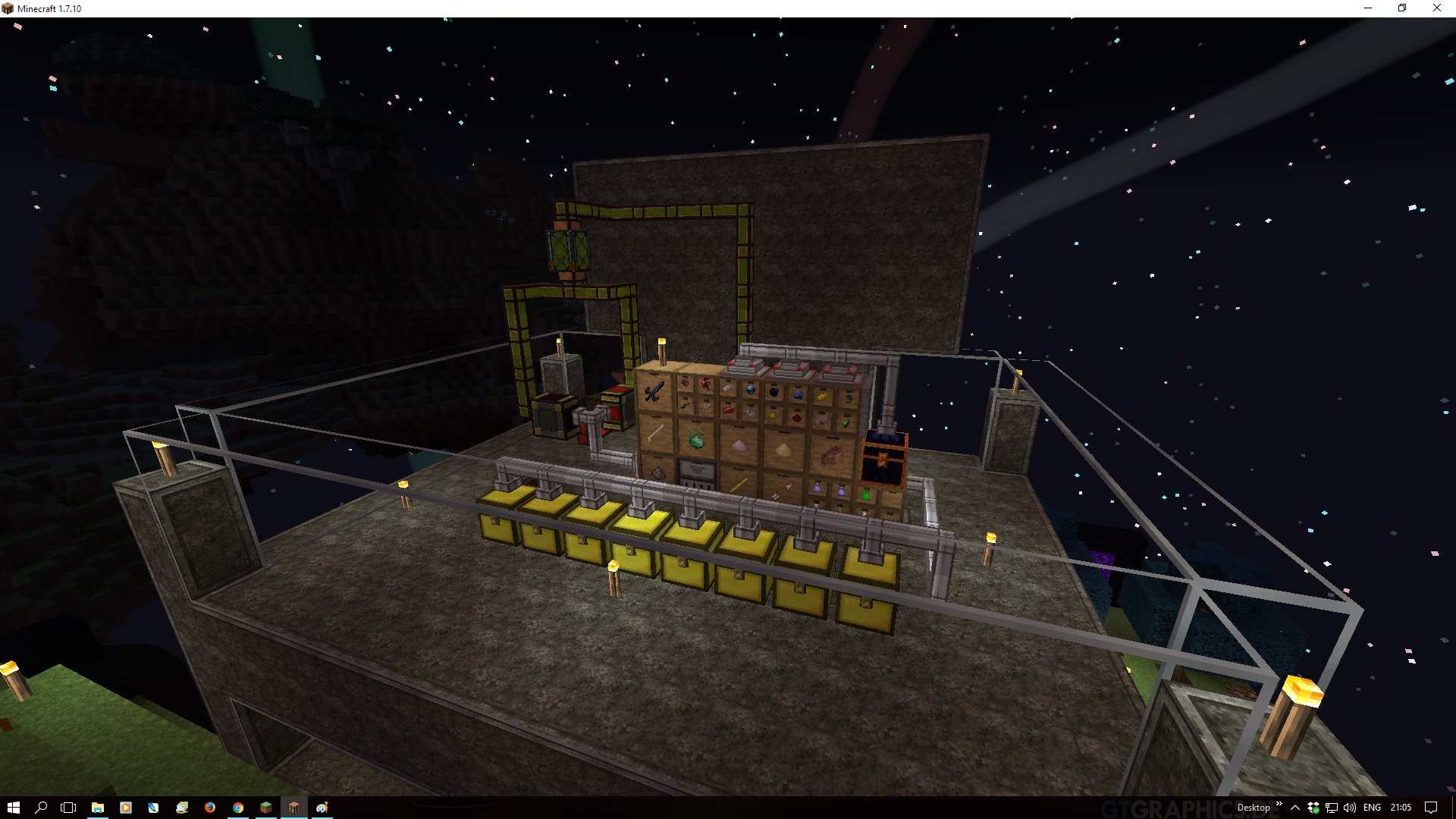 Sieving Room - aka resource generator. All processed and stored here. Also "lag factory". It's as compact as I can make it but still very laggy here (5 FPS on a good day!) 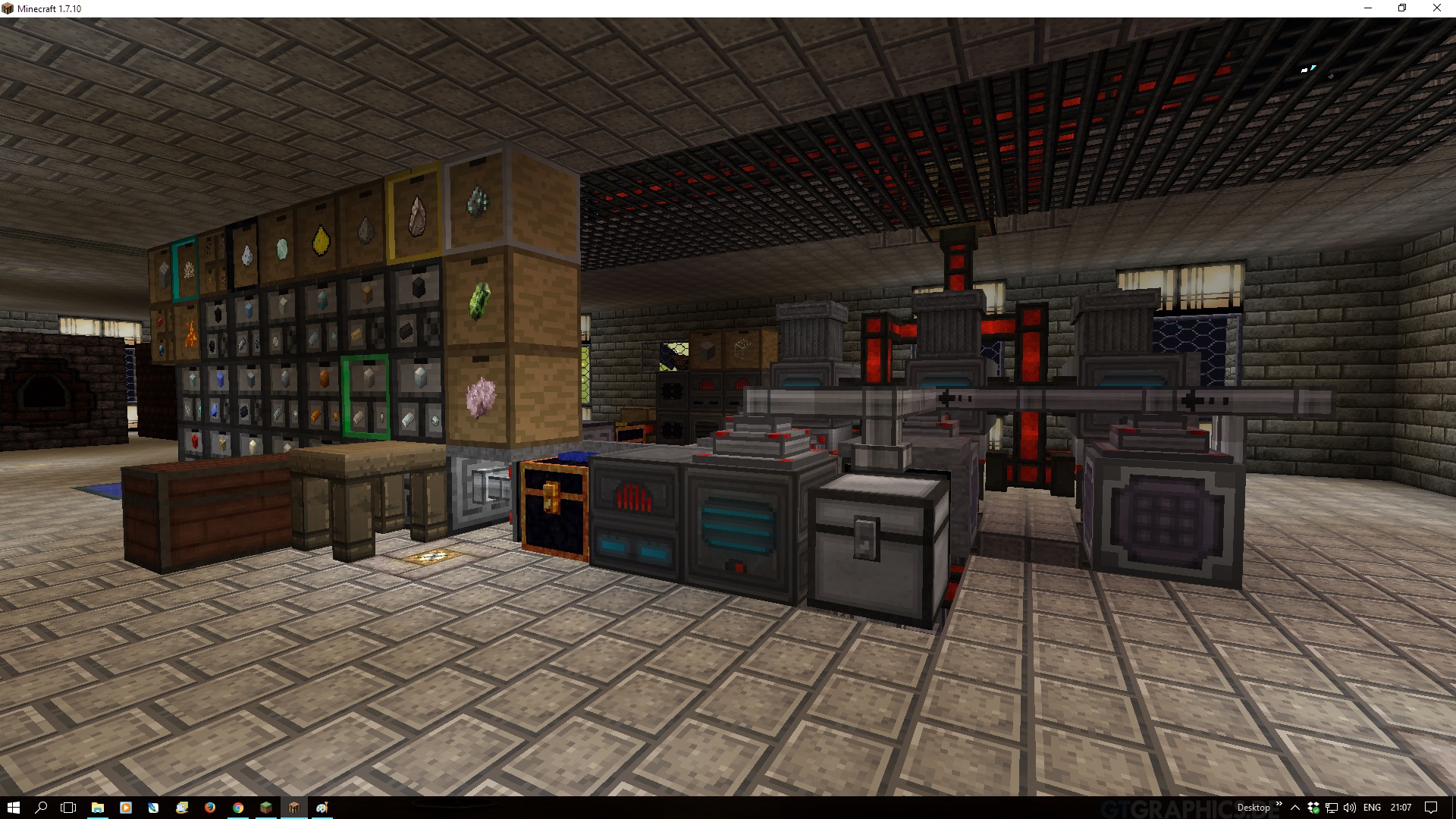 Manual Machine Room - the stuff I've built and kept for use (lots of stuff to make in the quest book, most of which I'll never need) 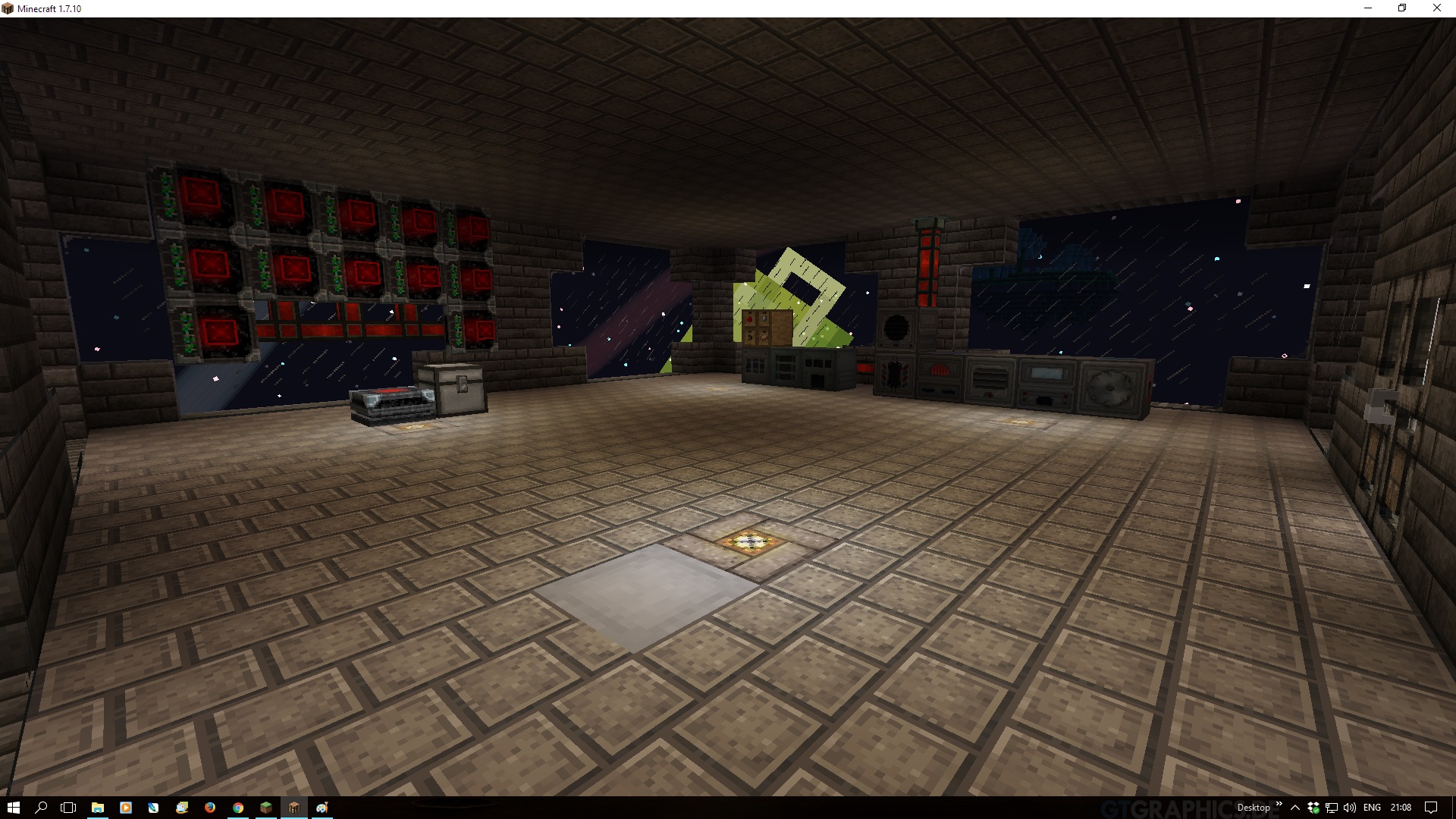 Next goal is an AE system and get all my magical crop stuff automated. I'm also planning a farm to grow every crop in game as I believe I need most of those later on. Inside the island I'm on will be stuff for automation crafting. This base is also fairly safe to work outside during a blood moon due to being very lit up. Going to get some turrets up to make it much safer.


Edit: If anyone is interested, the texture pack is a hybrid vanilla MC style scaled to 32x, John Smith and Misa's. Available on request, just send me a PM.
Reactions: Tianyulong and JaRyCu

Is this PO2 Kappa, Titan, or the normal version? No matter which, it looks amazing and I can't wait to see where you go next.
Reactions: Golrith

JaRyCu said:
Is this PO2 Kappa, Titan, or the normal version? No matter which, it looks amazing and I can't wait to see where you go next.
Click to expand...

Normal mode. From watching the YogsCast playing/derping it there are some big challenges ahead, and with some of the recipe changes that's enough grind/challenge for me. Some stuff is still cheaper then I personally like (in my personal packs I tend to up the recipe costs a bit more).

My ongoing goal atm is getting the rest of the harvesters in place, expensive due to dark steel and z-logic controllers. EnderIO crops are now automated so ingots are trickling in, getting zombie heads is my shortfall, but I'm sure there's a recipe for that! Then an AE system which will speed up a lot of crafting.
Reactions: JaRyCu

Golrith said:
getting zombie heads is my shortfall, but I'm sure there's a recipe for that! Then an AE system which will speed up a lot of crafting.
Click to expand...

Have you tried a mob farm with a beheading Tinker's sword? You could automate this fairly easily and get tons of mob heads.

JaRyCu said:
Have you tried a mob farm with a beheading Tinker's sword? You could automate this fairly easily and get tons of mob heads.
Click to expand...

That's something I may have to consider having discovered no direct crafting recipe for mob heads (excluding EMC which I'm nowhere near).

Have started setting up AE2 and believe I've encountered a bug, cannot craft Printed Silicon. Despite NEI showing me, EnderIO silicon won't process. GalacticCraft silicon does (in a test) but I cannot believe this pack forces you down that route first before AE2. Shelved that for a puzzle for another day.
Reactions: JaRyCu

No new screenshots yet, but some major milestone achievements:


I've decided to build a mining laser & processing setup using as much as possible Mekanism for the automation. Another source of resources, and also something to build with all the mek stuff in the quest line

Mekanism gave me a surprise with it's power requirements, draining all my stored power very quickly. I thought there was an error until I checked the configs, but then I was also pleasantly surprised at the power gen rates too. One of it's big solar panels beat all the solar panels I had built to date, and is almost enough to run my resource sieving/processing. Crazy stuff!


My AE2 room. While familiar with the mod, it's the first time I've actually used it, so nice learning curve. Still need to work out where I'm putting my autocrafting side of things. Interesting note, I had to cheat in the silicon doo-dads, as the inscriber just would not work with it. But the advanced inscriber worked perfectly, which is great.
(Texture pack note, I have AE2 at 64x instead of 32x, as I'm trying to texture it as an advanced hi-res tron influenced style (looked much better in AE1)) 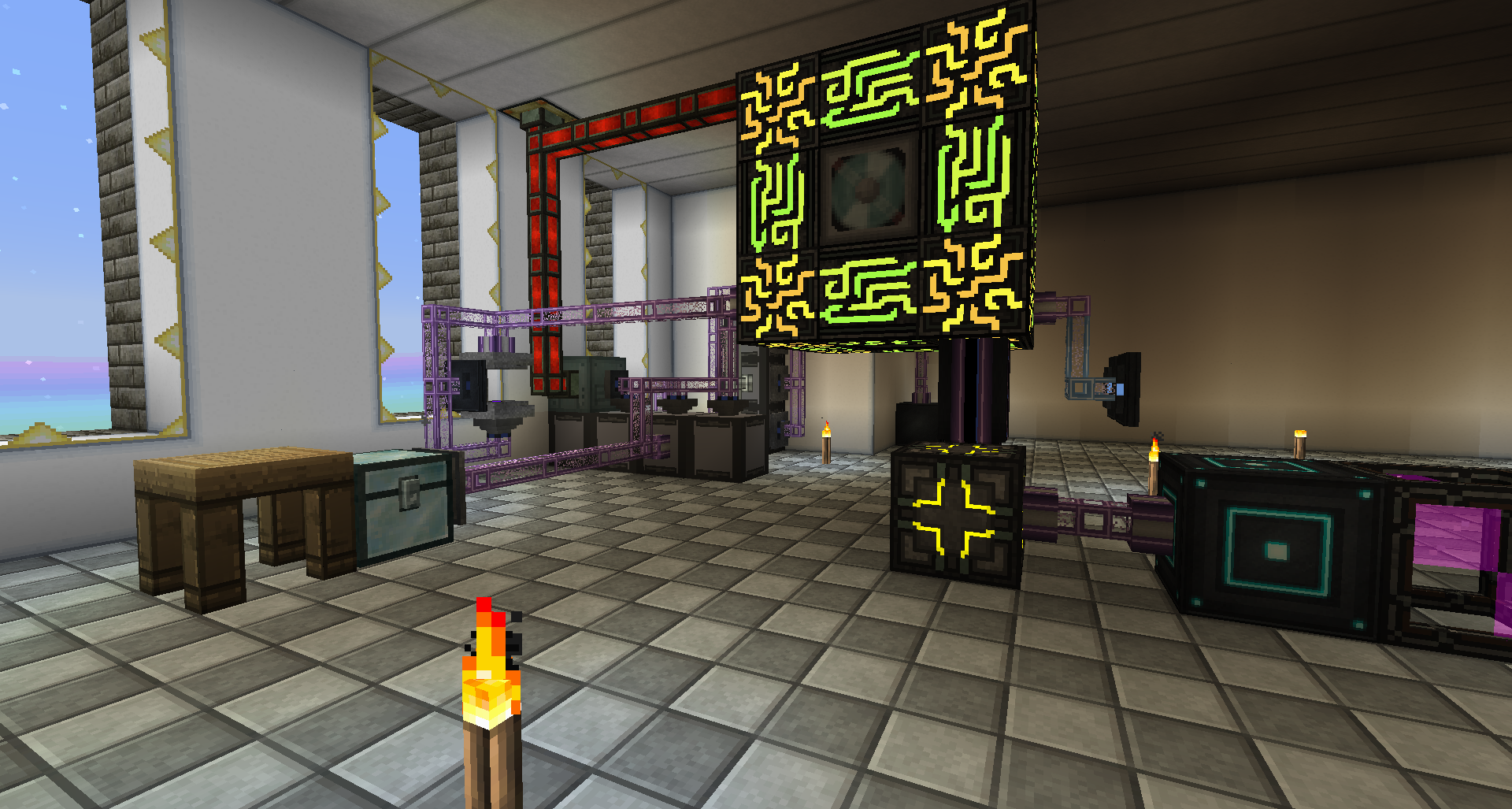 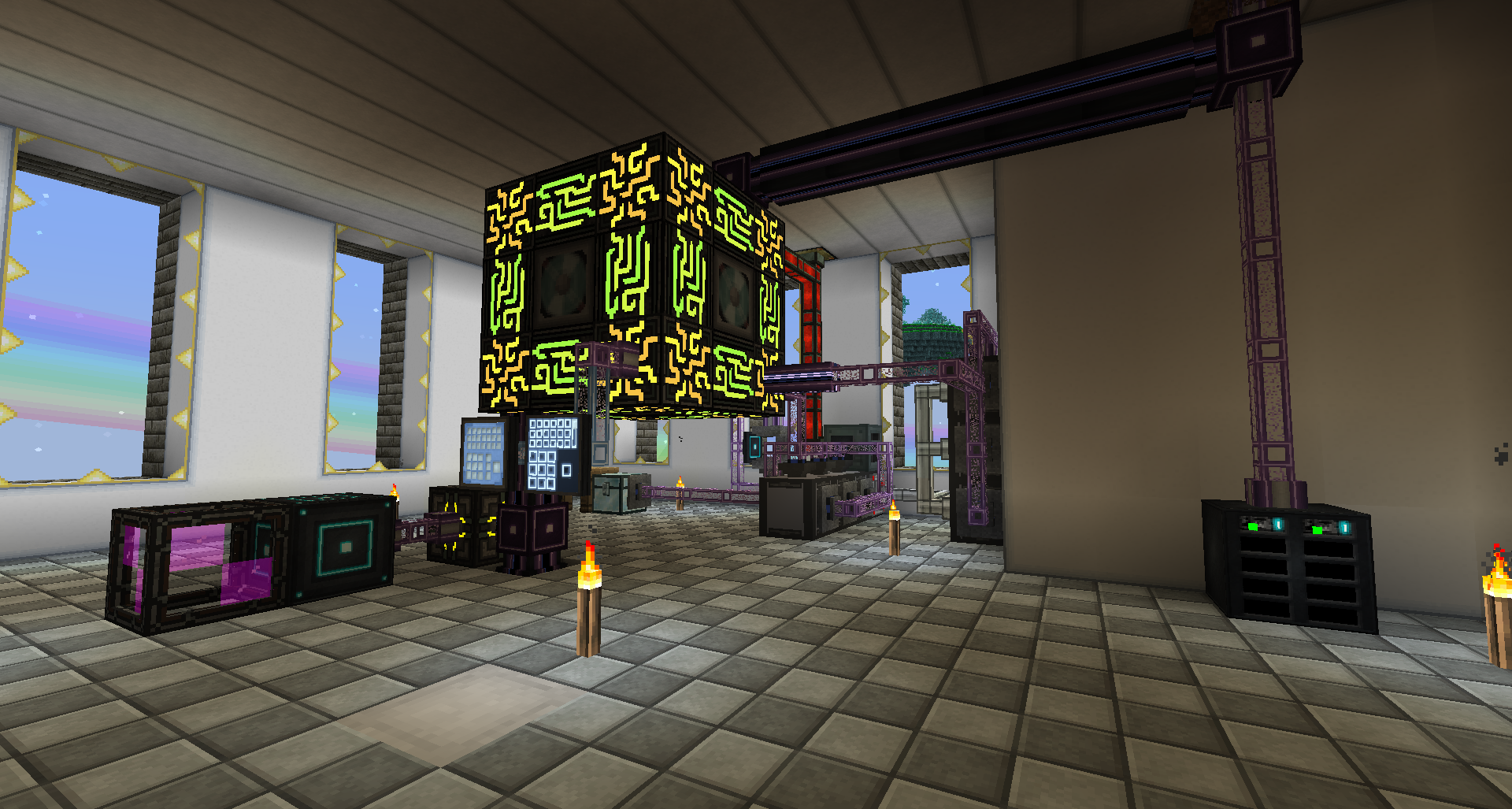 Small new building, "Testificate Rehabilitation Shelter". Discovered 3 things while curing zombie villages. 1) Turn on particles to show that splash potion of weakness are working... 2) Use the correct golden apples... 3) Bloodmoon mobs insta despawn
I may have some cloning projects in mind at a later date. In the meantime these fellas can have a nice quiet rest right next to the noisy tree farm with zombies staring at them through the windows. 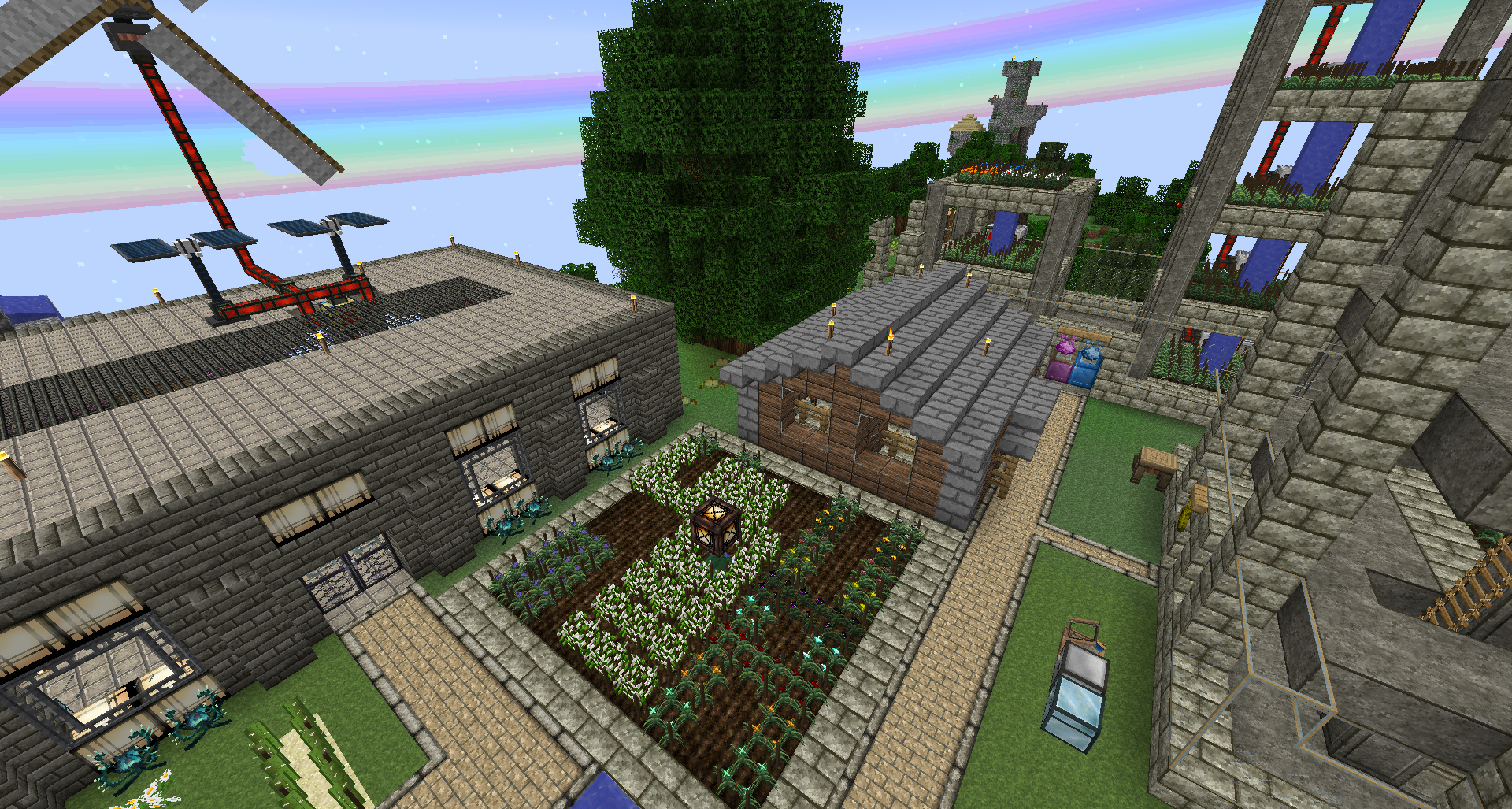 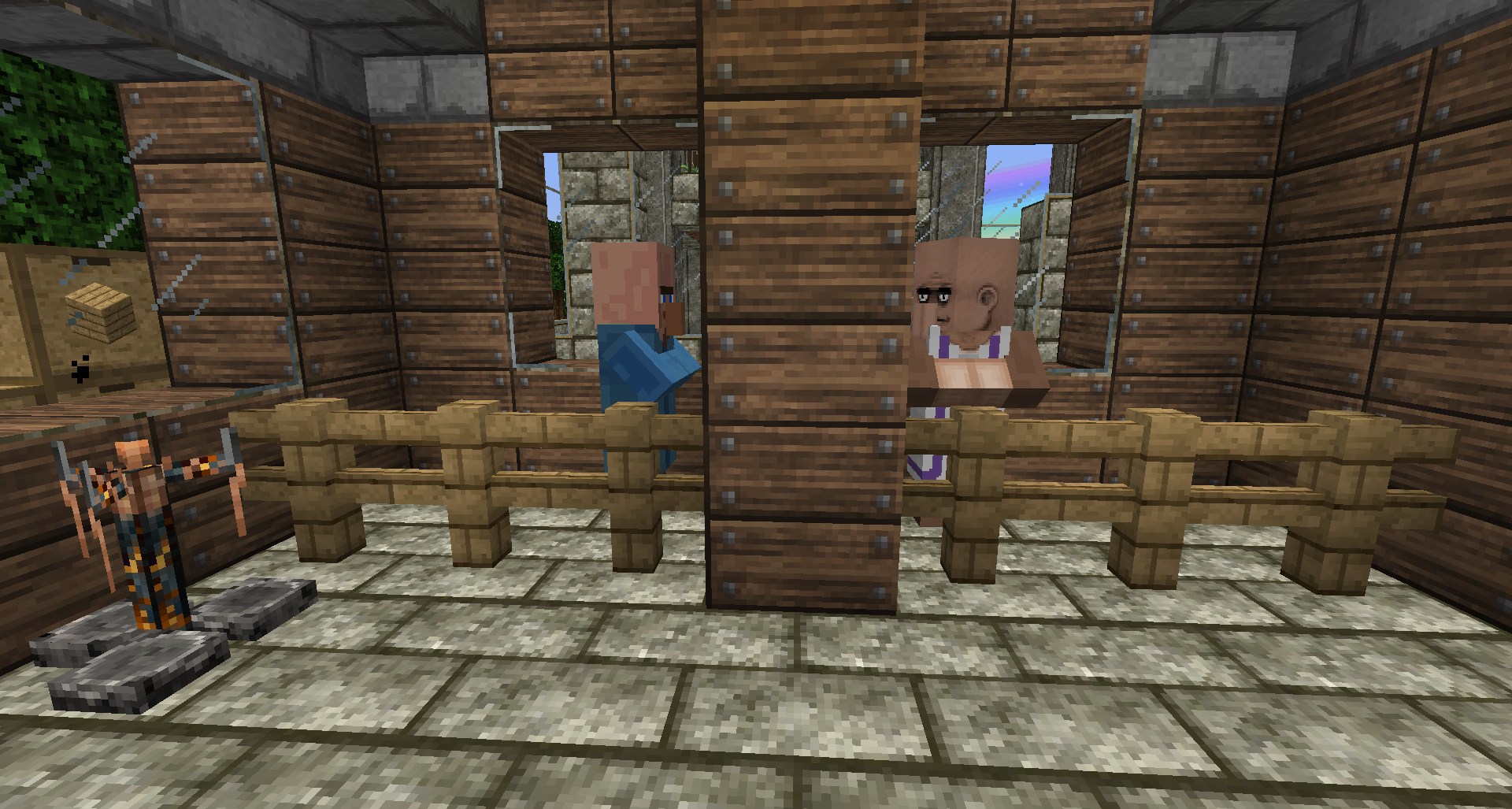 Overflow from the treefarm is sent into Mekanism Heat Burner thingies and Biofuel system for more power generation. That has filled a Resonant Cell
Reactions: glepet1962

Some more progress, some of it quite major (for this pack!)

My cloning facility, decided to make this somewhat presentable: I thought it might be a good idea to put some turrets on (why not?) until I discovered small fact with creepers and laser turrets tends to result in a boom. Bit's of my new facility needed repairs, along with more lighting to keep them away from the structure. 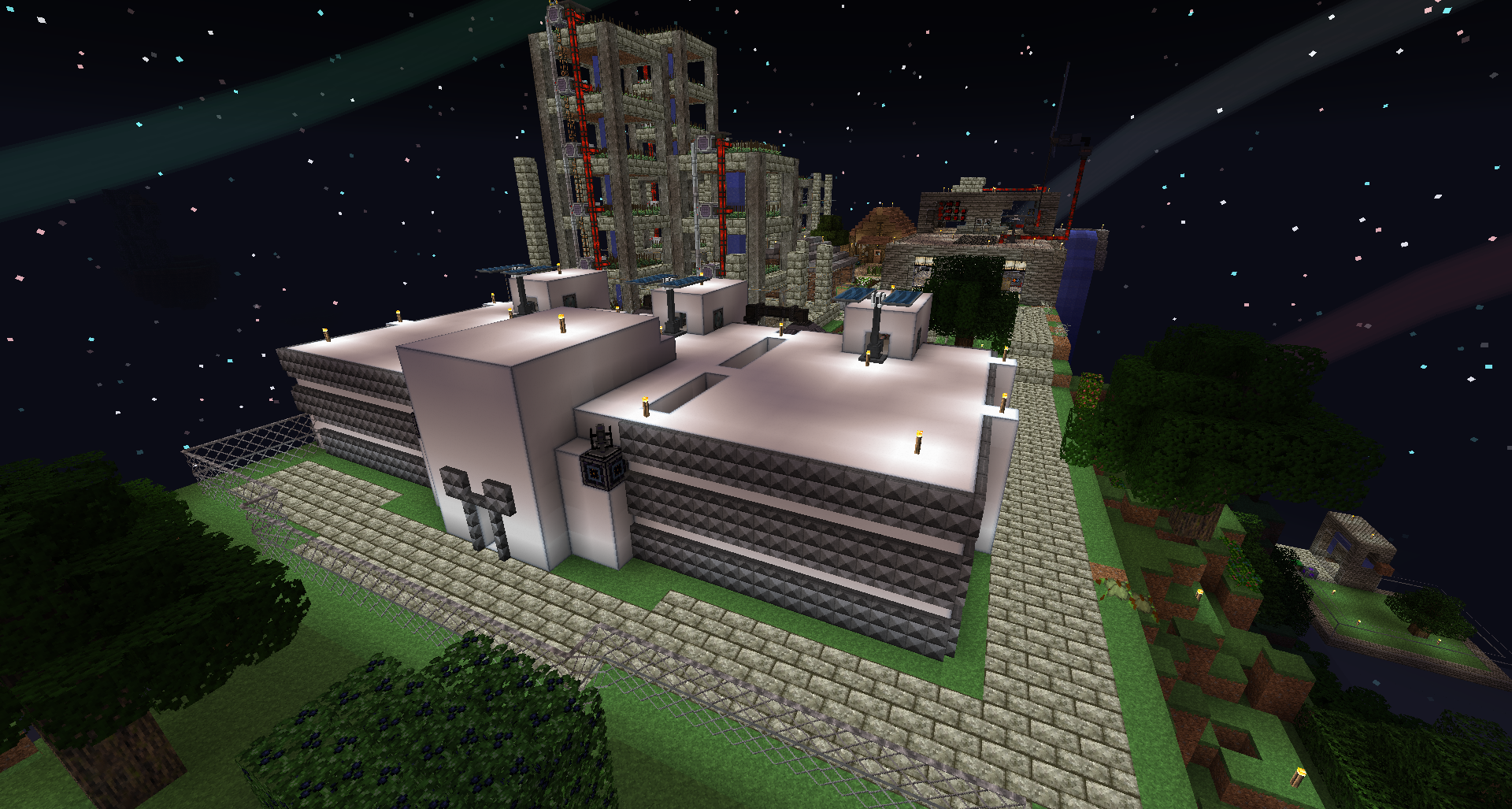 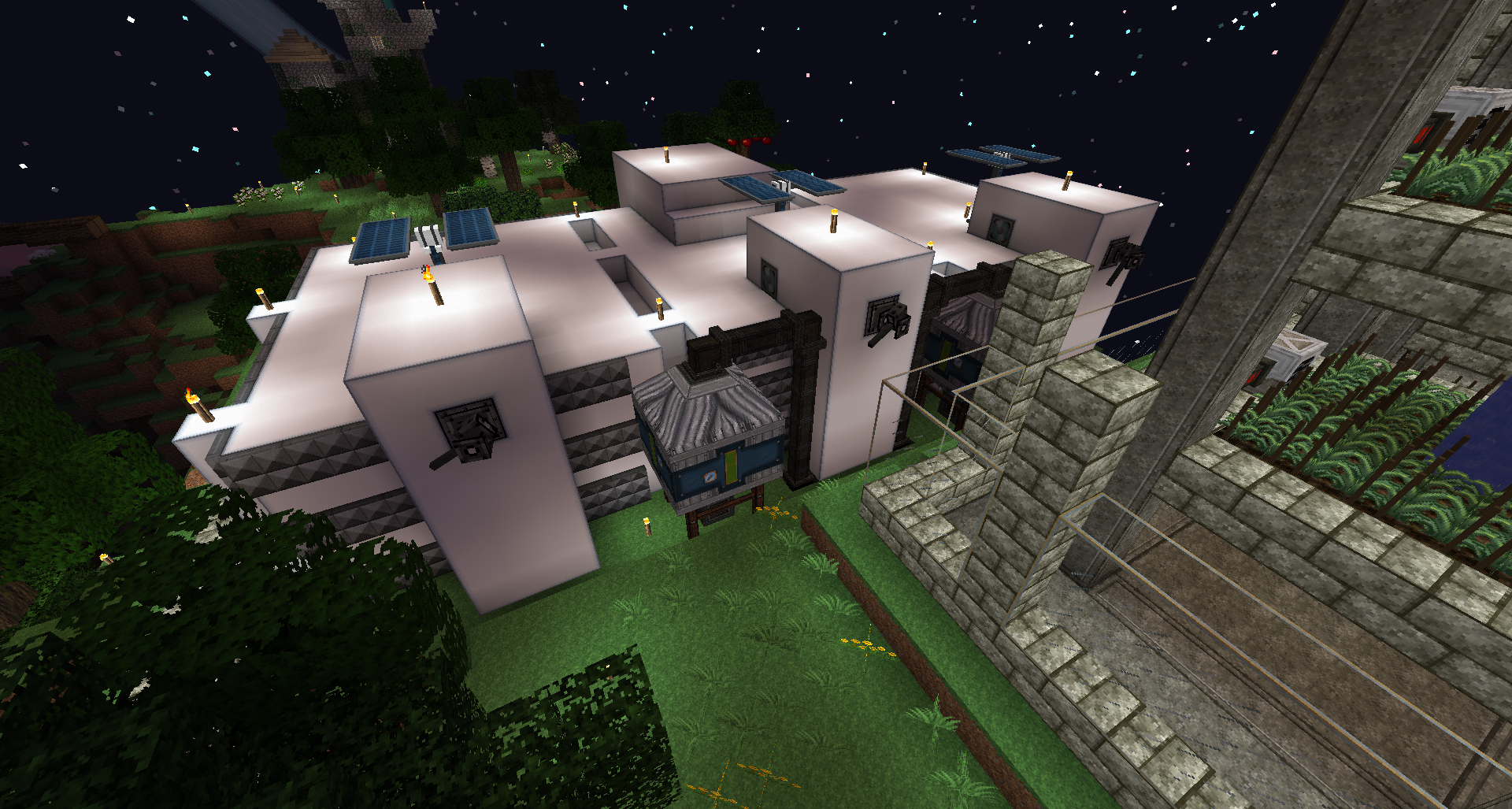 I may have a villager infestation... (I used my cloning facility with a zombie being cured captured, and spawning them as exact clones, to give me a villager boost. With enough villagers, they had one thing on their mind...) 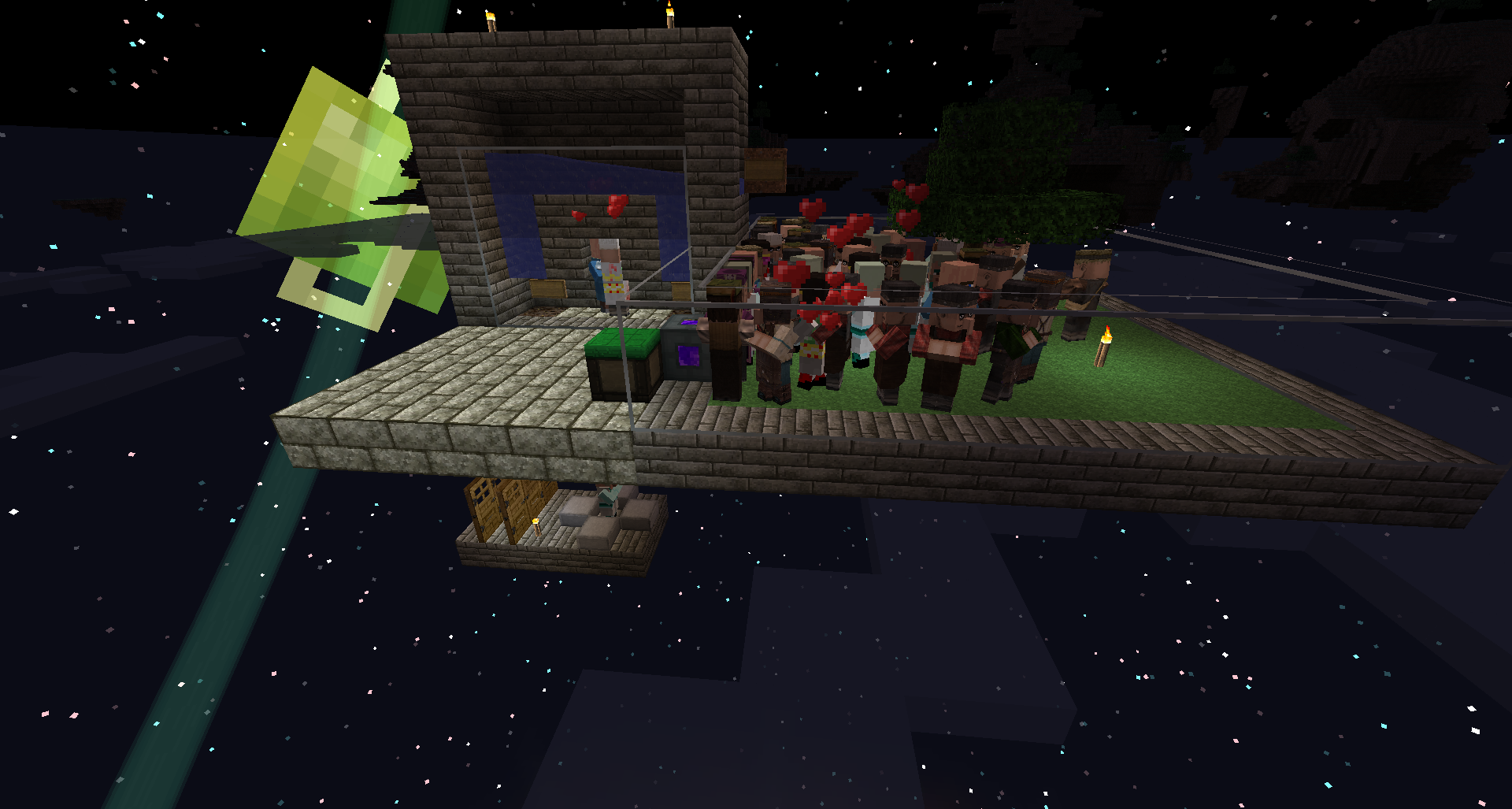 Overview of my entire base: 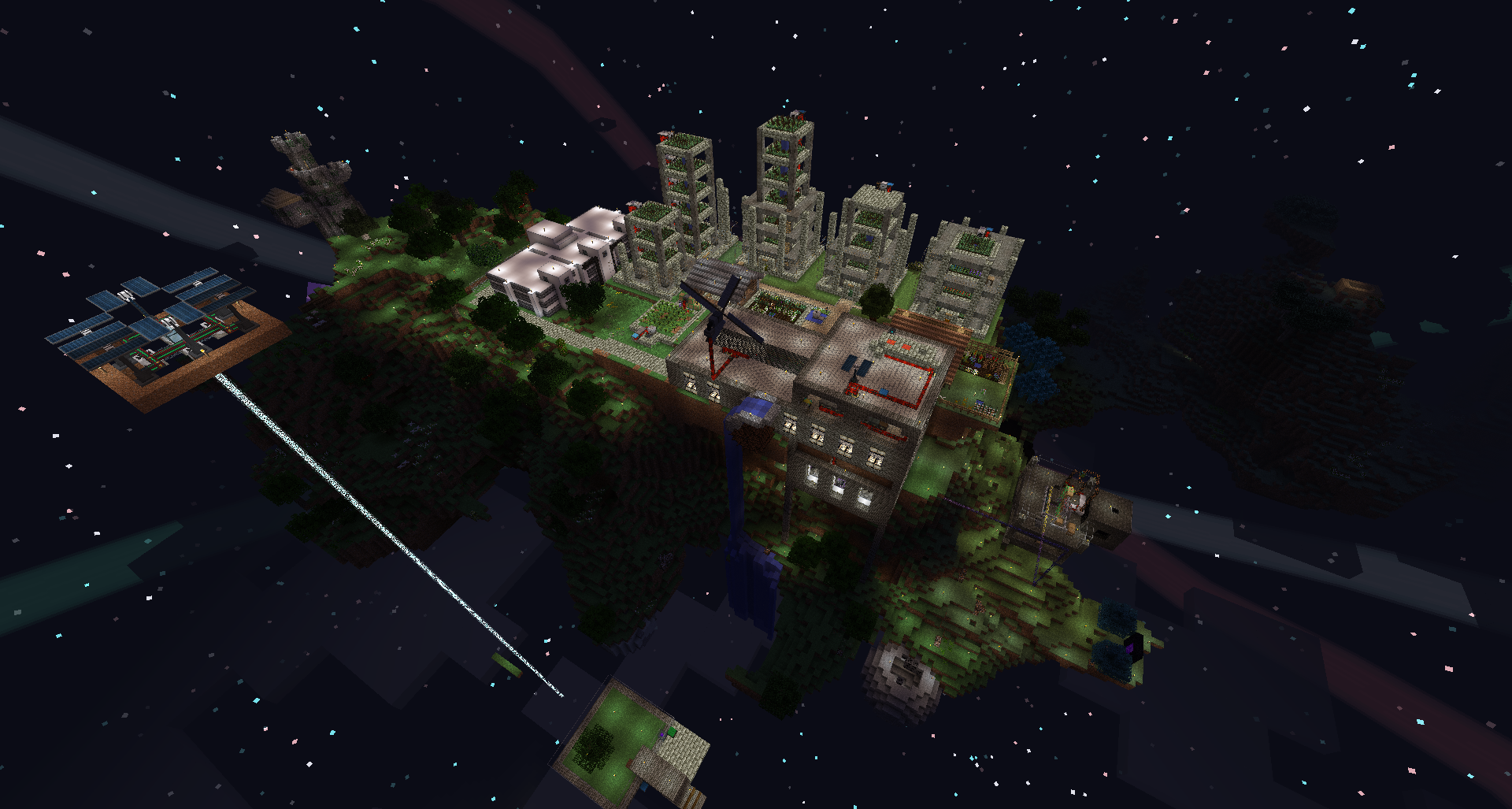 With the "help" of some villagers, I have a philosophers stone. That also needed a drastic increase in power generation, and better power cables. I'm on the path now to the Energy Condenser!

and I now have a ProjectE Condenser! Even more amazingly, I chucked all the "junk" I'm getting from the mob farm, all the useless quest rewards, all the useless tech you are forced to craft to progress in the quest books into the condenser and made 14 nether stars.

Now to start the EMC game!

After a break from the game, been playing again and am now making singularities and Demon Steel of the 11th Magnitude. Bit of a waiting game for the singularities, but still have plenty to do!
This was built today. Before that been slowly moving my farms and 10/10/10 the seeds to the Mining Dimension, have a small capacitor seed farm going above the nether, have visited the moon & mars (and need to grind my way through the rest of Extra Planets). My mob spawner is producing Neutrino Blocks and Awakended Draconion blocks for me.
I also need to go "backwards" and do botania (not a fan of that mod!) for the remaining components required for the catalyst (the ultimate stew I will be cheating in, I started a setup on that, but that's such a tedious and insane recipe to track, I gave up)

On the verge of crafting infinity ingots and still haven't 100% a single chapter yet! Infinite EMC, that's nice 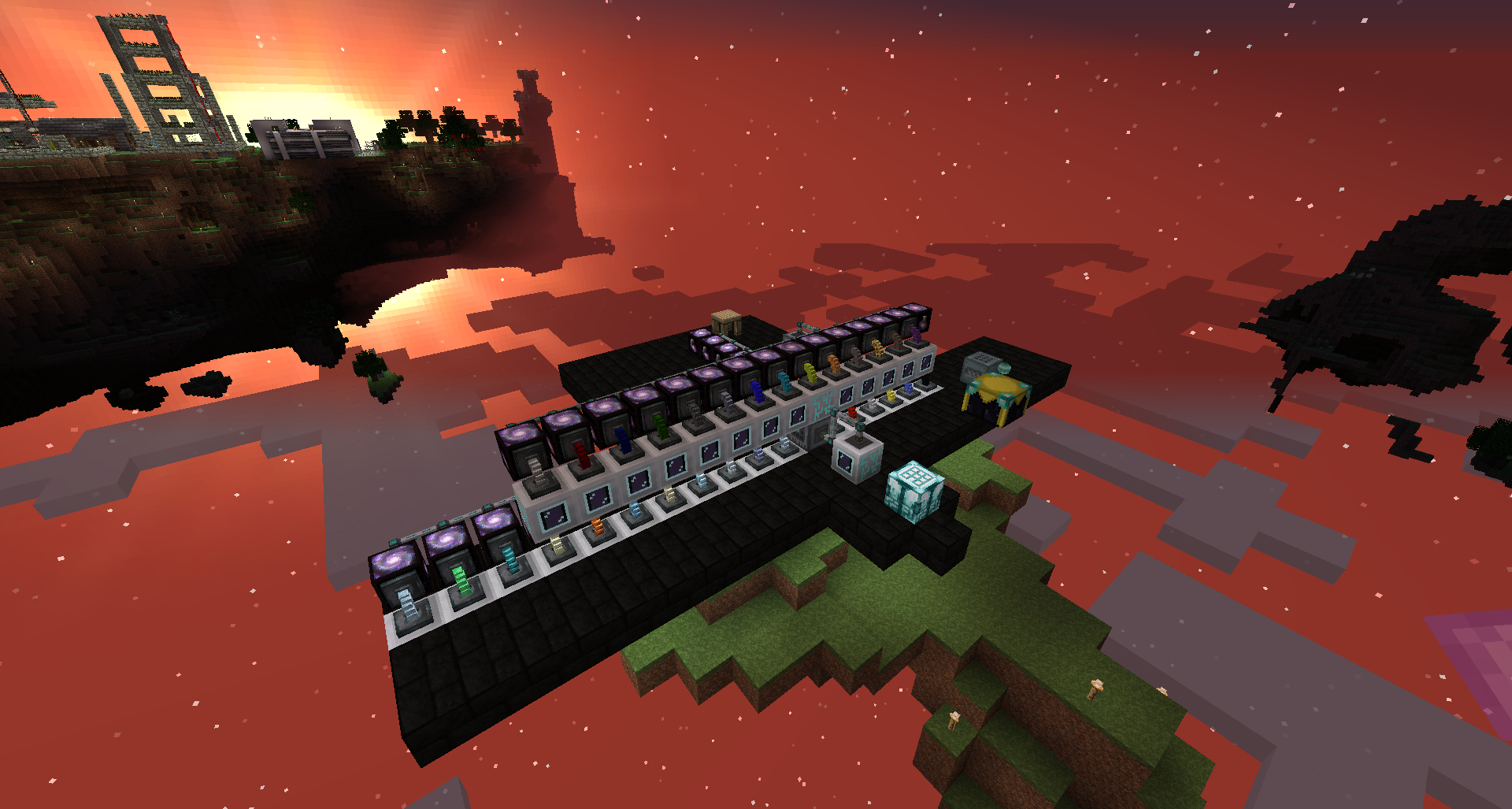 Computer room has grown a bit: