rikailp said:
I disabled it. It was extremely laggy/freezy loading the world without it so it was hard to tell, but i don't believe it made a difference. It crashed after a bit for me.


I'm experiencing this exact issue as well, just like rikailp describes. It occurred on the transition from Mindcrack v7 to v8.01 and is not improved by adding or removing Optifine. My framerate also dropped from ~75 to ~30 in my main base. The rendering/fps issue doesn't seem as bad away from my processing equipment.

More on the lines of fps issues, I took a few screenshots.

Velotican said:
Disappointed to hear that ripping ChickenChunks out of the world still causes major shenanigans. Back to looking at the configs then. At this point it's all shots in the dark unfortunately.

Velotican said:
2) Disabling the chunk viewer (it needs tweaking to be any actual use to anyone other than CB anyway)
Click to expand...

Velotican said:
3) Raising the orphan clearing threshold to 864000 (every 12 hours, probably not recommended but worth a shot)
Click to expand...

This one does seem to load chunks somewhat quicker. It took me longer to find the issue, but it's definitely still happening. Also, it gets laggy rather quickly, i assume because of all the orphaned chunks sitting in memory?

Another thing i noticed is that most of the chunks behind me don't really try to render until i turn around and look at them... I don't believe this happens to the same level in vanilla that it does here... I can often turn around and see the void in the not too far distance before most of the chunks load in. It doesn't matter how long i've been sitting there really, they don't really load until i turn around to look at them. I know there's an option like that somewhere in optifine, but this is with a vanilla jar.
B

I have noticed this same issue with the upgrade from Direwolf20 version 4 to 5.0.1 (local SMP server). Of note, it only seems to happen while I'm near my base with all its machines. Traveling away or to another dimension seems to restore expected loading behaviors. I don't have conclusive evidence of this, however.

It's really inconvenient with my level 10 to 90 arcane levitators - I always fall allllllll the way to the bottom before it loads the levitators, and THEN it flies me back up to 80.

Edit: Took some pictures to demonstrate it on Direwolf20.

Standing on the corner of my roof for a few minutes: 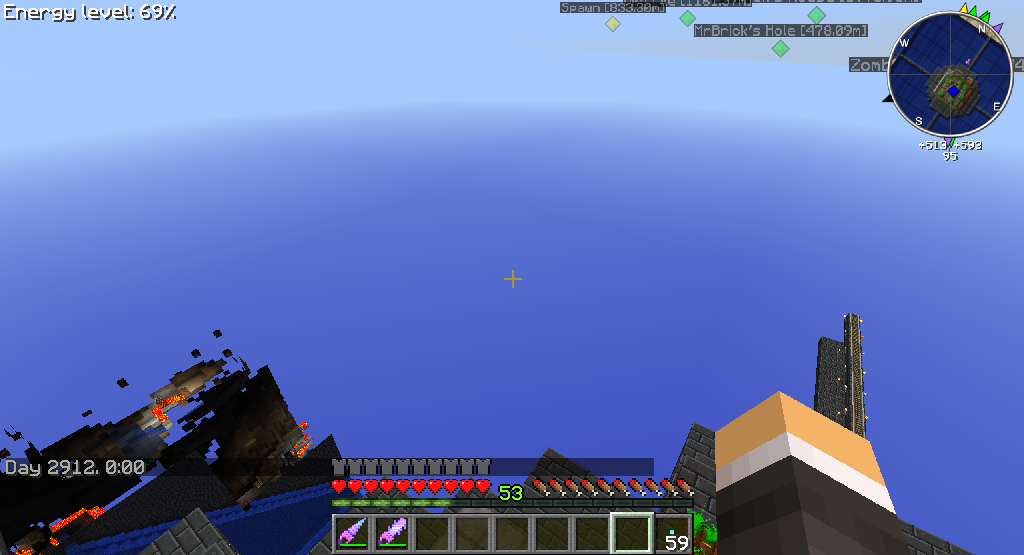 Moving toward the affected chunks, which rendered immediately upon approach: 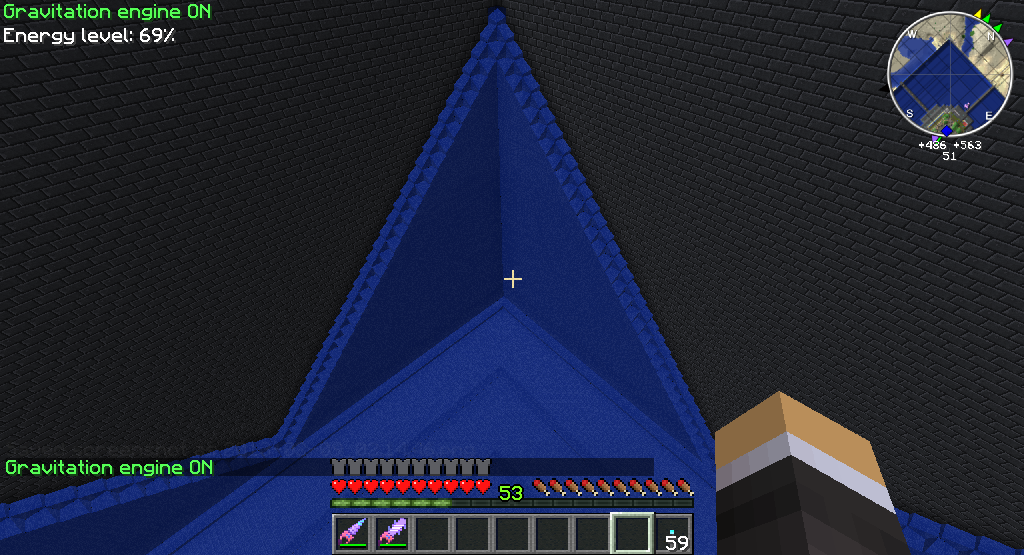 Edit 2: After visiting rikailp's Optifine link and seeing that it is incompatible with Forge 516, I upgraded the server and client to 523. After sitting in the same spot for a couple minutes, here's the improved (but still imperfect) result: 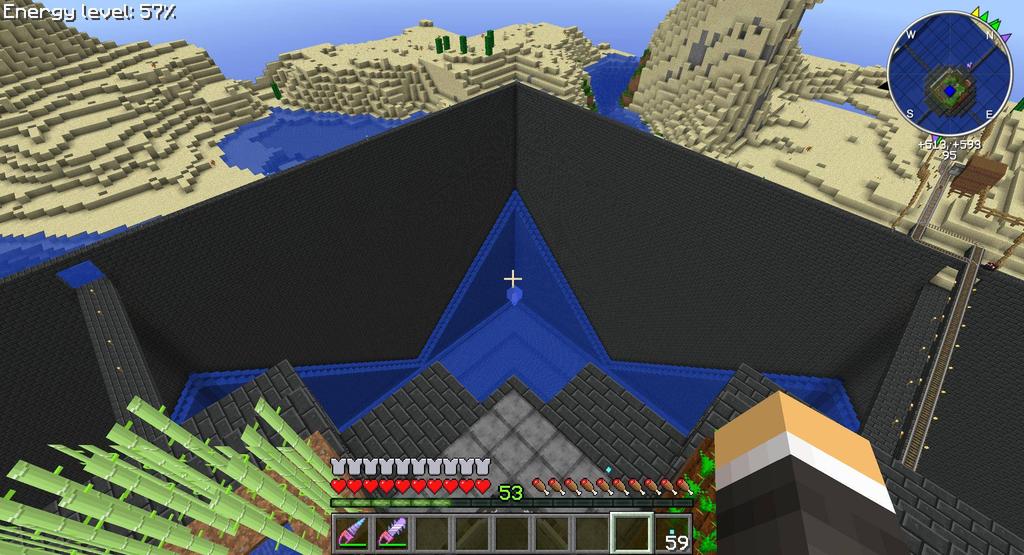 In the time it took me to upload this image, however, it hasn't managed to load ANY chunks outside the image - nothing to the right or left loaded until I stared directly at them.
V

It's looking like fundamentally broken chunk loading behaviour that's adjusted by Forge, isn't it? My guess is it's too willing to unload chunks without telling it not to... and most of my chunks are chunk loaded on top of this.

Velotican said:
It's looking like fundamentally broken chunk loading behaviour that's adjusted by Forge, isn't it? My guess is it's too willing to unload chunks without telling it not to... and most of my chunks are chunk loaded on top of this.

Blarg. Limited options left. I'm actually willing to chalk this up to a Forge bug at this point.

If I think of anything else I'll add it to the thread.
P

I am experiencing this problem too, doesn't matter if it's Mindcrack v8 or DW20 v5 (or even selfmodded 1.4.7 instances); it kind of fixes itself when I pause / open the waypoint menu in Rei's Minimap / do anything that stops the world from ticking - suddenly, a truckload of chunks shows up. Optifine is disabled.
V

...I hadn't even considered Rei's Minimap might be screwing with it. That's a possibility.

As a test, can I get you guys to download my config pack, overwrite your configs and see if that fixes your problem? This would either pick up on any busted configs in the FTB packs or make it clear that the problem isn't a config issue because I don't get any of this.
P

Your config pack seemed a tad faster - 10% maybe - but the "press Escape to chunkload" method still yielded a very noticeable loading speed increase.
The F3 debug screen sports a number for occluded chunks (thus: loaded candidates for rendering, but currently invisible) labeled "O", which increments very slowly or not at all when I'm standing still in my base, right after returning from a Mystcraft age. If I pause in this very spot, it shoots up to 800-1200 rather quickly (some 30ish seconds). If I wait for that and leave the base, most of the surrounding chunks (ocean and extreme jungle, I'd wager the full "far" viewing distance) will have loaded. If I leave the base straight away, fly up and take a peek at the surroundings, I can barely see past 30 blocks and the chunks don't really load. Mind you, the whole thing is outfitted with a 10x10 square chunkloader.
Since I'm running this on an i7 3770k with 16 gigs of RAM, 8 of which are allocated to Minecraft (and it rarely even uses more than about 1.5), running rather current 64-Bit Java of course, nothing of it should be an issue..
Just for the record, hopping into the aforementioned Mystcraft age shows the "loading chunks quickly while paused" behaviour without actually pausing - but then again, there's nothing there but a few cows and trees..
Right now I almost believe the custom Java garbage collection options used by the launcher might be the culprit. Or maybe it's the 60ish barrels along a redpower tube.

Edit: Meh, same thing when the instance is inside MultiMC.