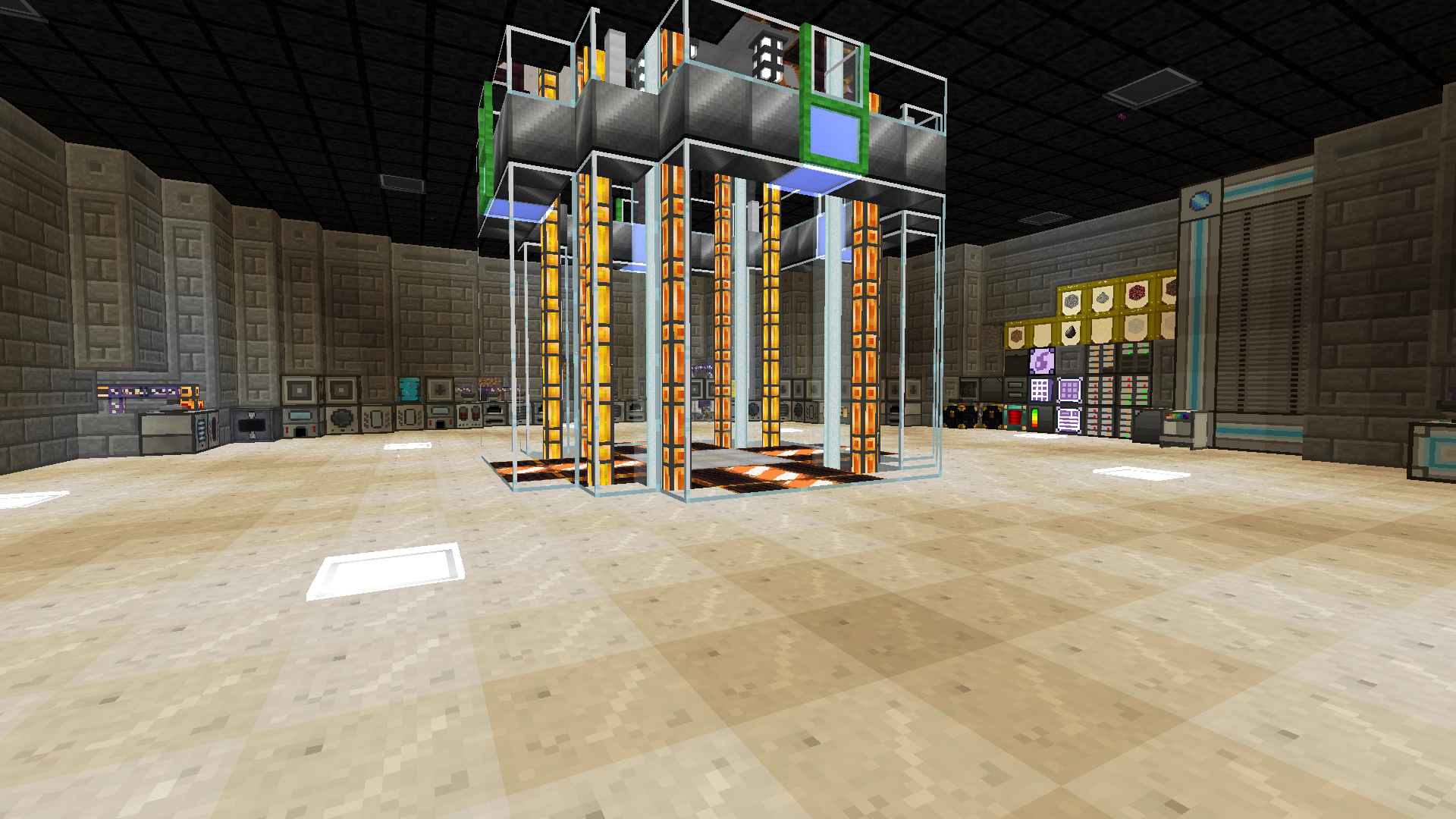 Main TE processing, AE storage and MAC, To the left is the Big Reactor and behind is the farms. 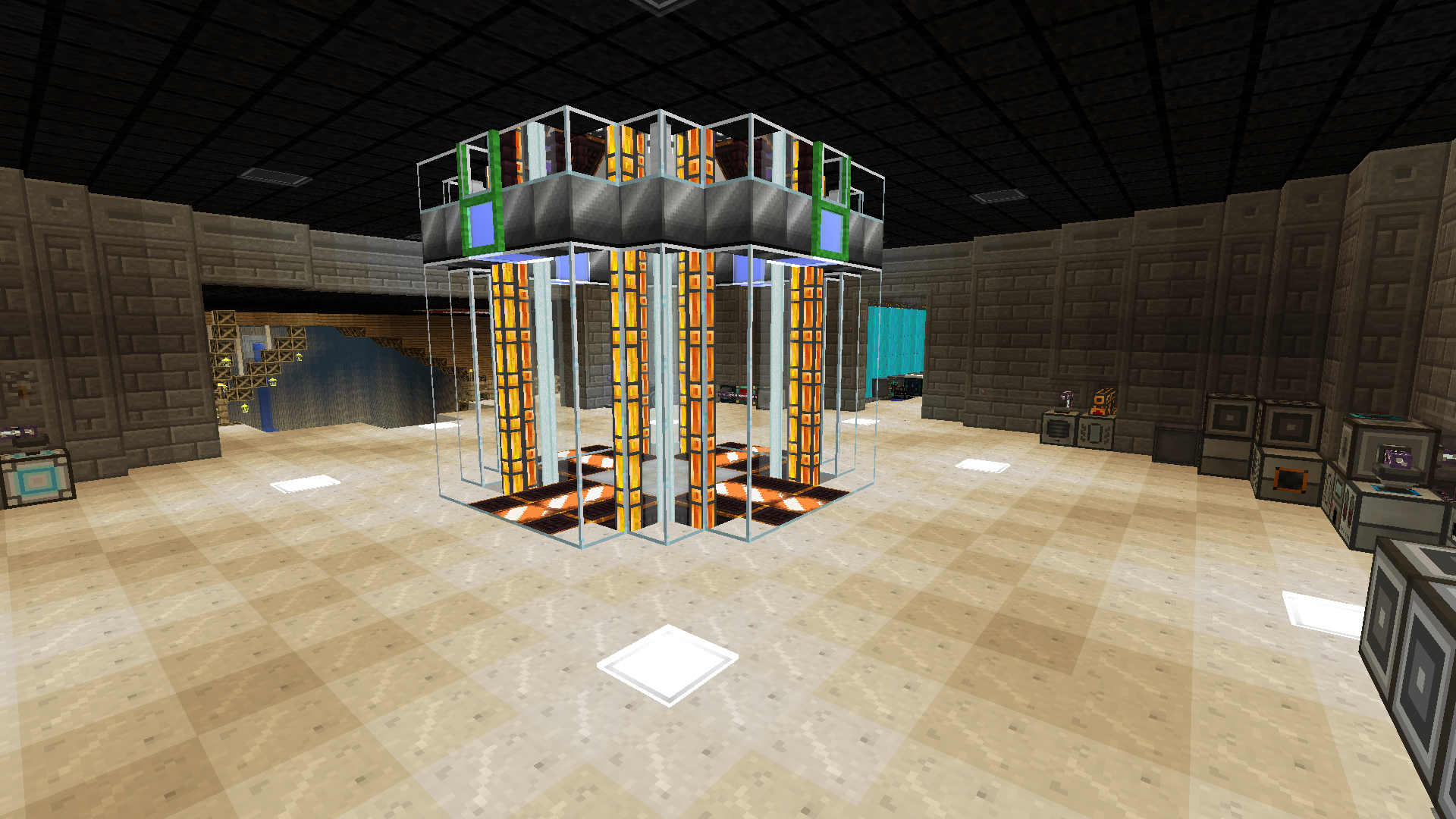 Another angle, can see into the reactor room and into the farming area. 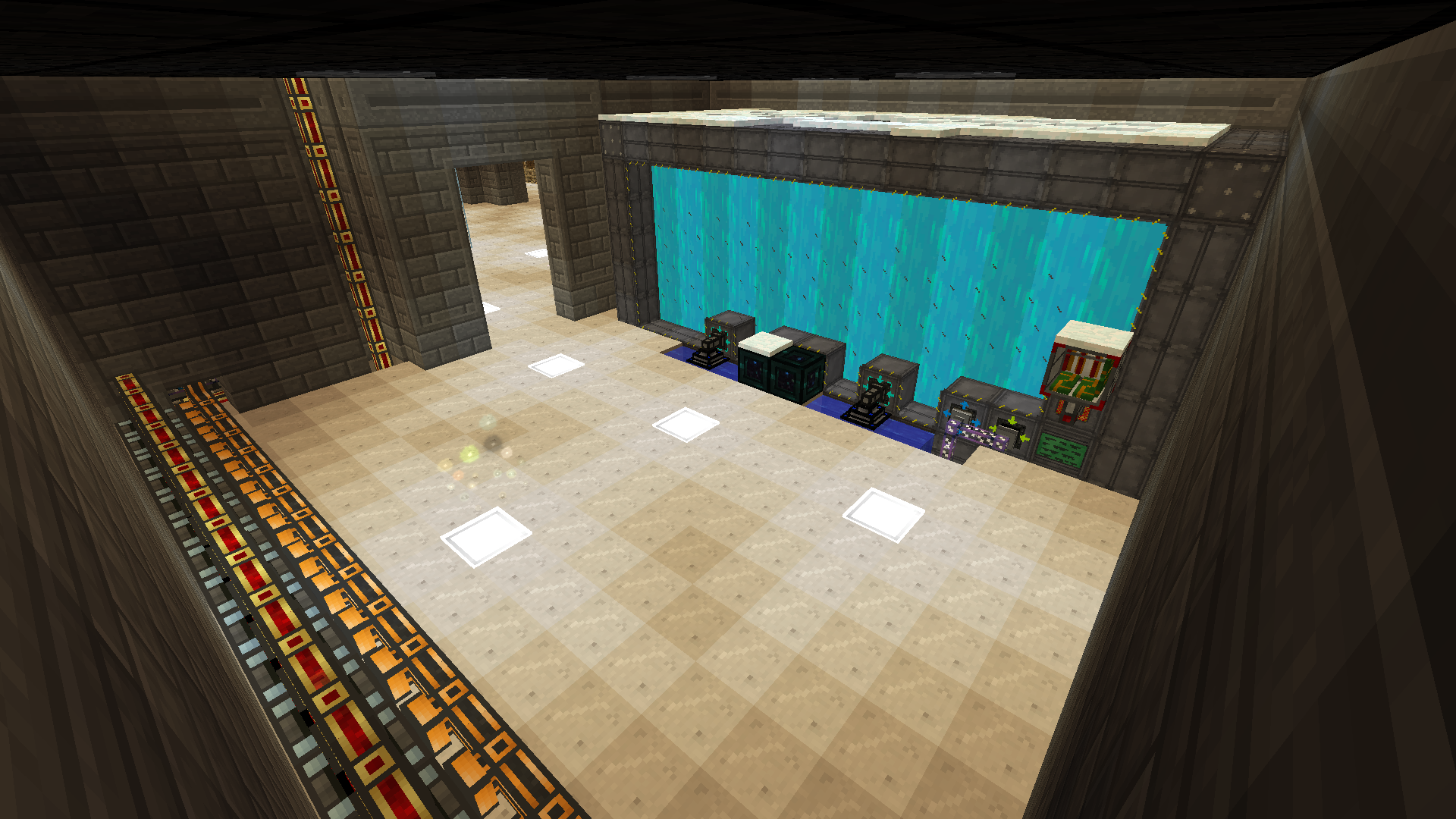 The Big Reactor, started out with one 7x7x7 passively cooled then added in a second to make the cyanite I needed for the turbines quicker. Then joined the 2 together to make a 15x7x7 with checkerboard pattern of fuel rods and made it actively cooled with 4 turbines upstairs, currently producing about 90k RF/t(about 4% of total power production, you'll see later) but could support a lot more turbines.

Transfer nodes and water feedback from turbines upstairs keep everything happy, could actually remove the transfer nodes. Used to be controlled by a Rednet Controller, set to lower output when demand dropped while it was passively cooled, still the same controller but no idea how it works now it's actively cooled.

Compression dynamos at the bottom of shot running of Liquifacted Coal are my backup generators if anything breaks and activate automatically when my Energy Cells are empty. 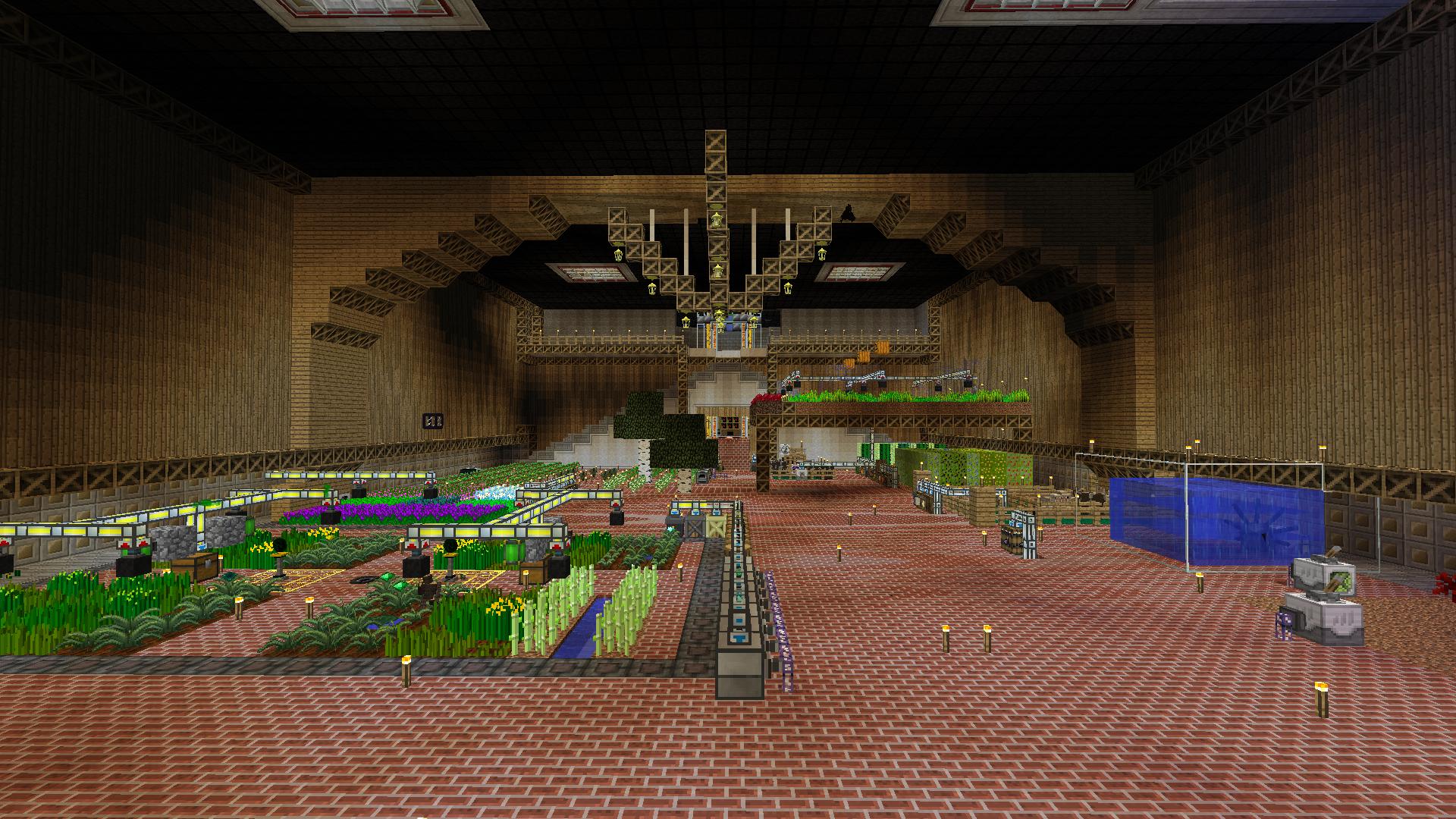 My original mining shaft actually came through the middle of this room, can still get to it by breaking the brick floor, aaaah nostalgia hit.

It's all here in this room, for a sense of bearings, the top floor at the back of shot(grey stone wall) is level 7 and the door below it is level 6. To the right you can see the dye trees and just out of shot is the brine production, this is under the cigar shaped building on the surface, directly behind is the mana bean farm. 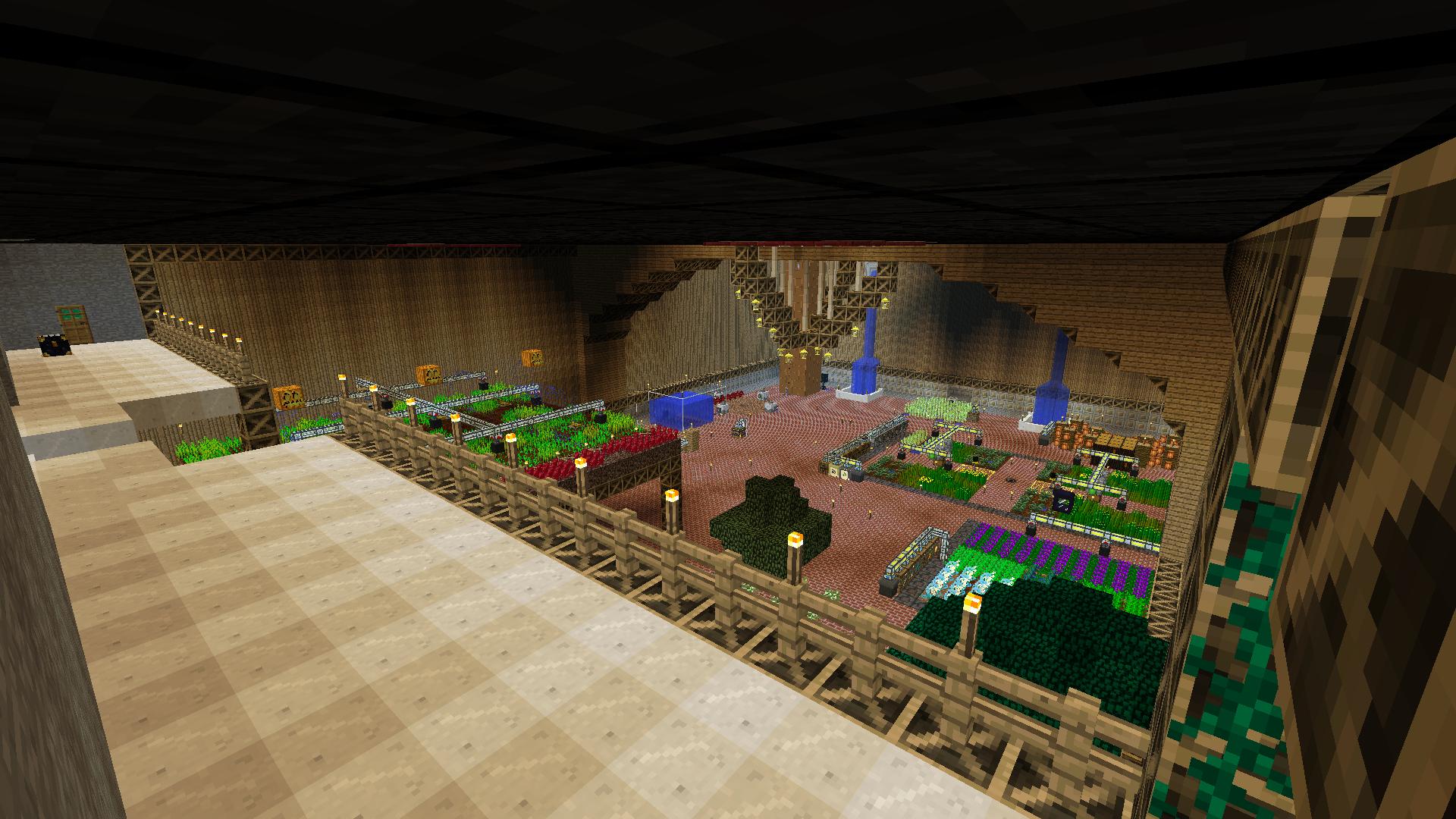 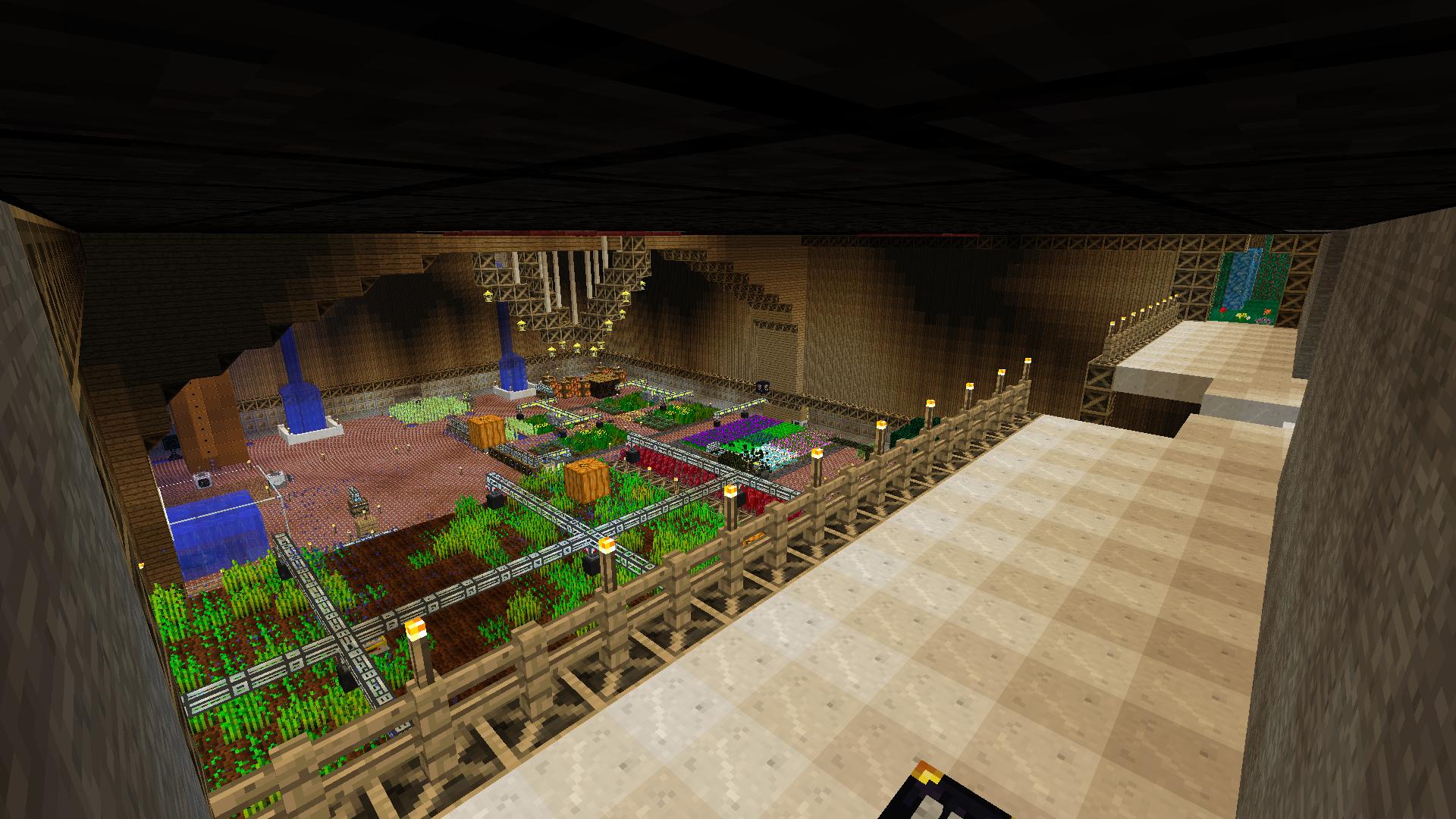 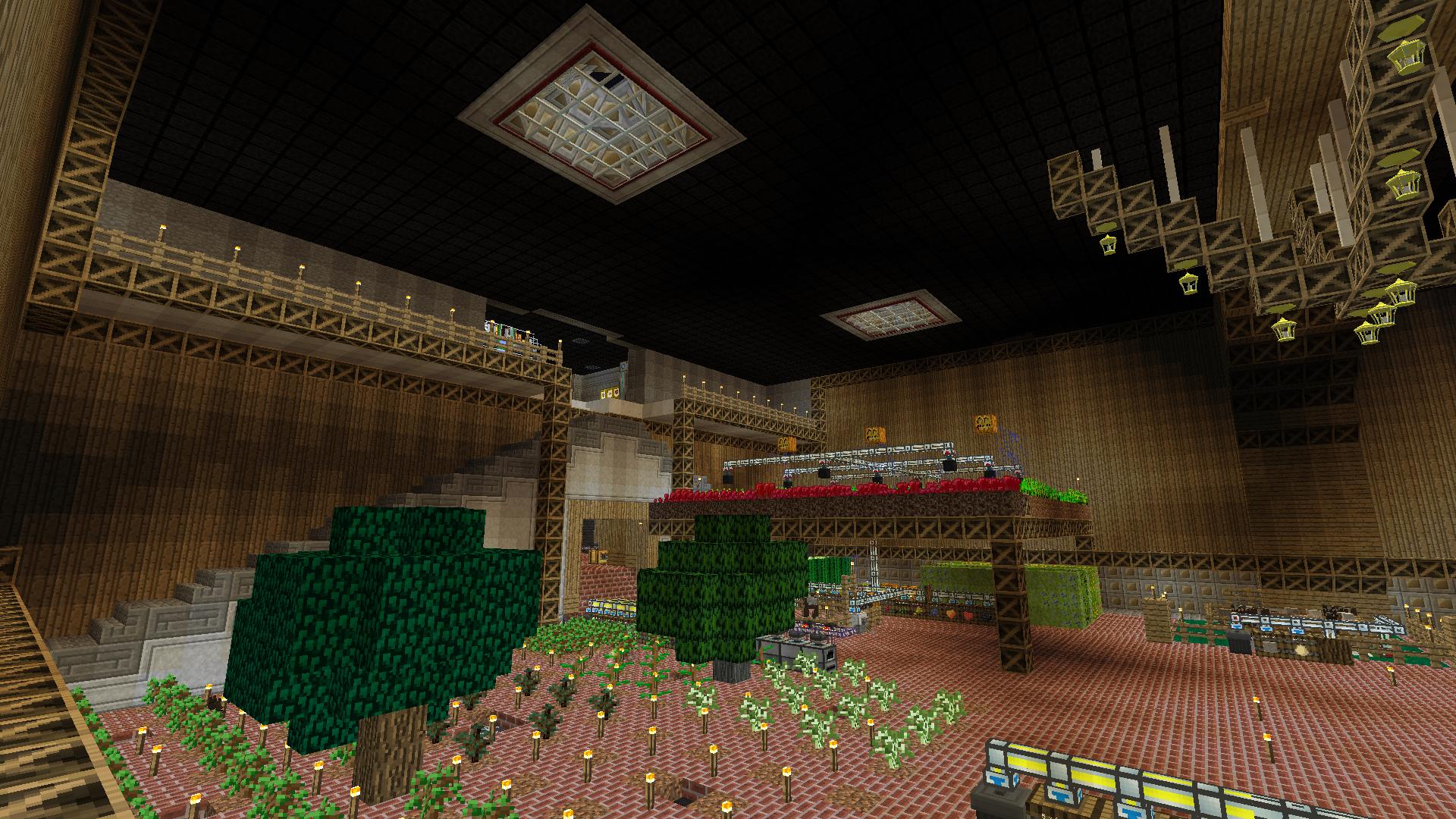 Other shots of the farm, wooden door is the one you see from the exterior shots and was the original entrance to my cave base, my ender chest containing all my tools which I access through an ender pouch is still there.

Can also see the Mekanism brine production which I "helped" with Time Torches and a slight glimpse into the Mystcraft nexus room. As well as my floodlights in the ceiling, fairly proud of these, made with wrathlamps and a combination of chisel, carpenters blocks and microblocks.

Oh yes and the chandelier 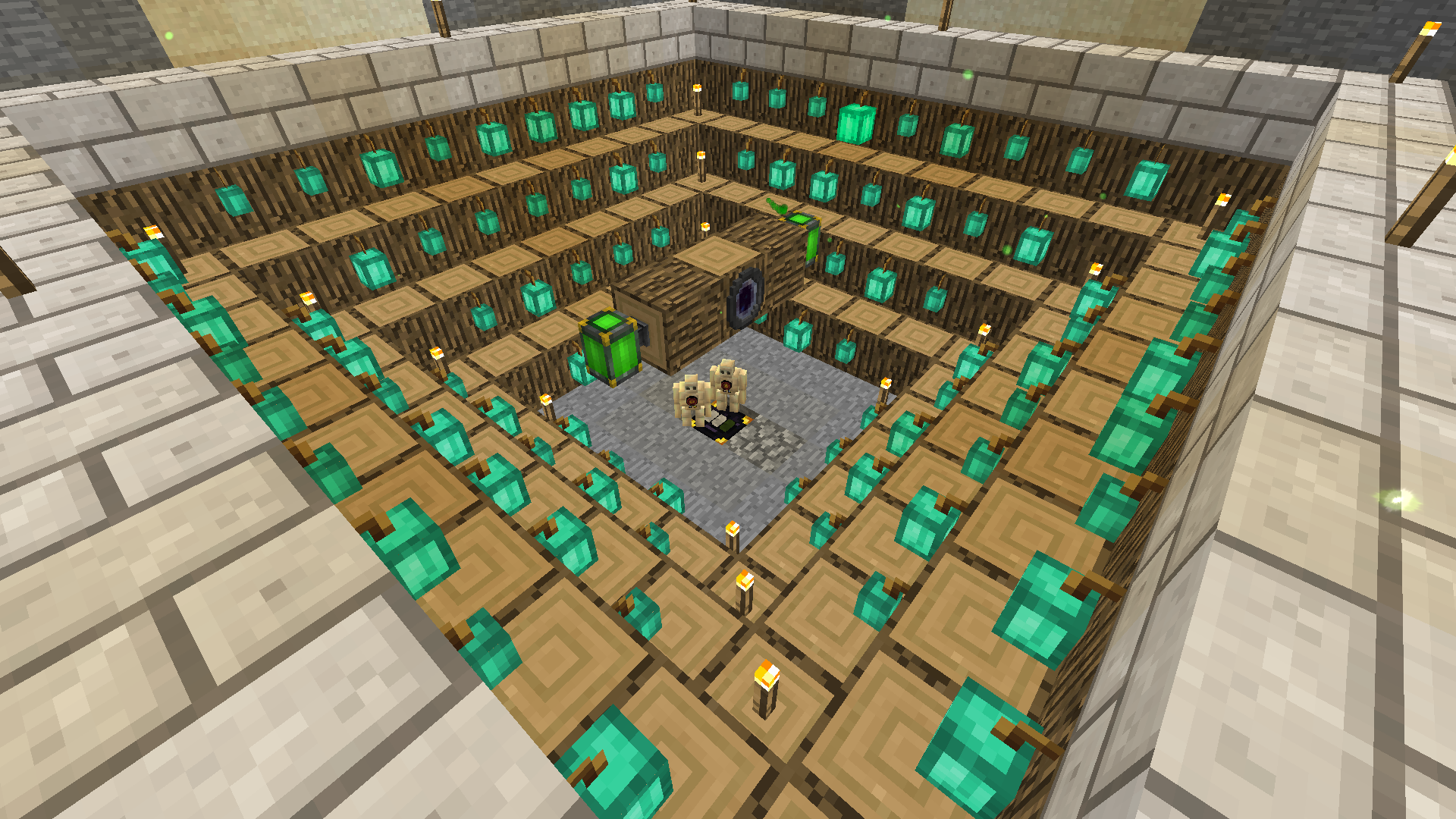 Mana bean farm, this is the most effective farm design I've found, someone from forgecraft I think. Nothing visually stunning, magic biome comes from a silverwood above on the surface. 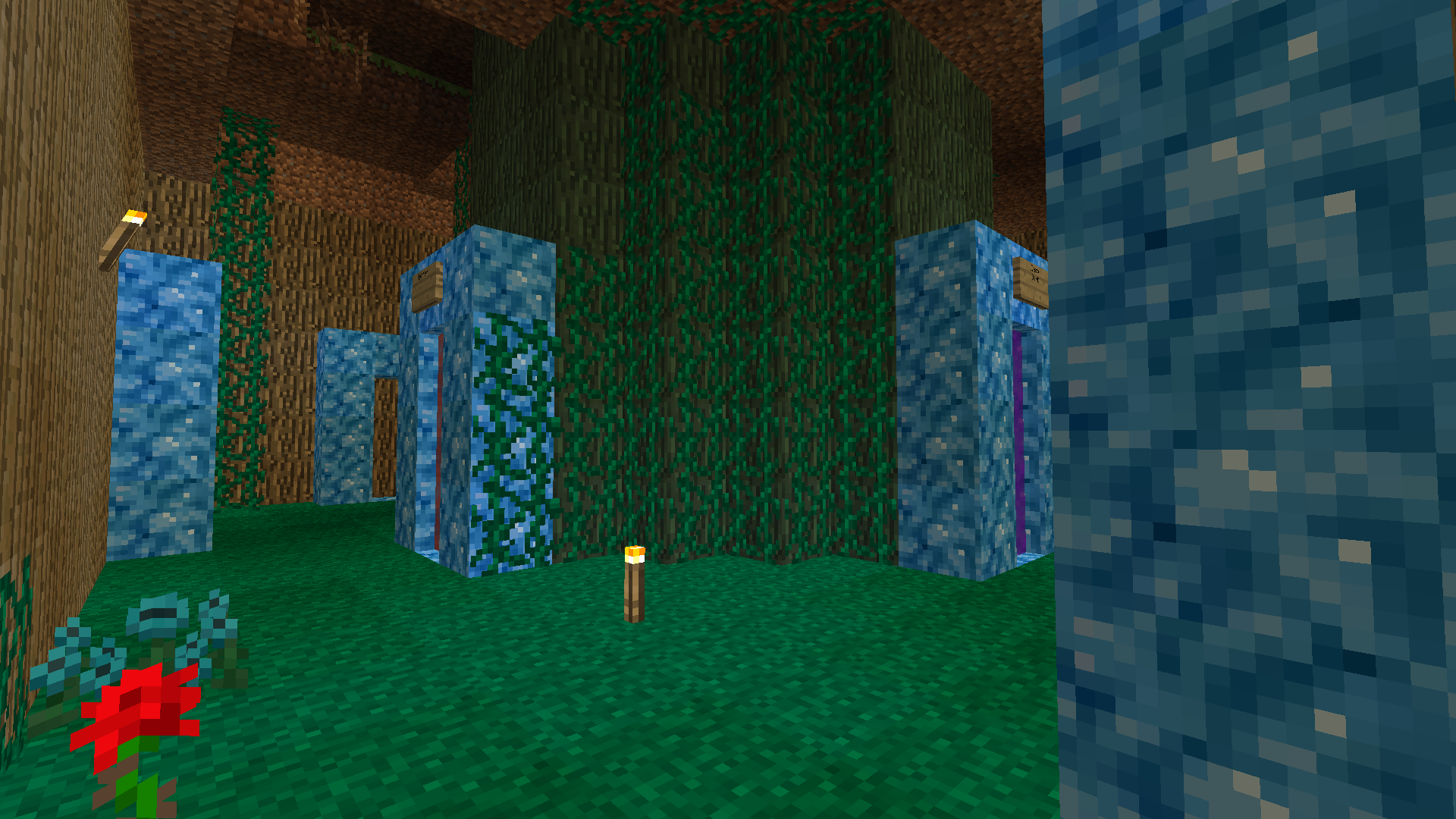 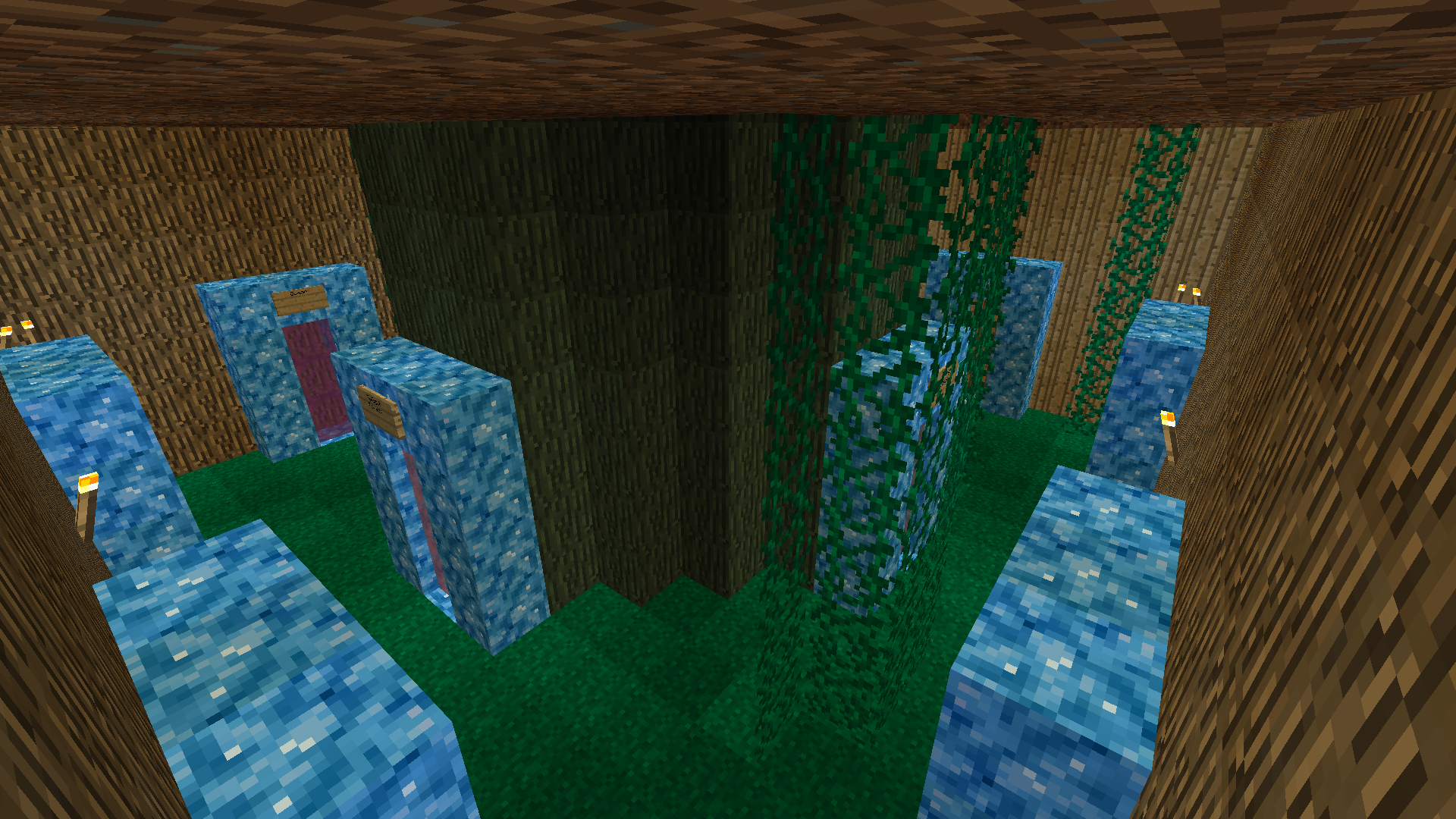 Mystcraft nexus to all the various spots, made to look like the trunk of the tree on the surface... Doesn't line up but you would've been fooled if I hadn't told you... 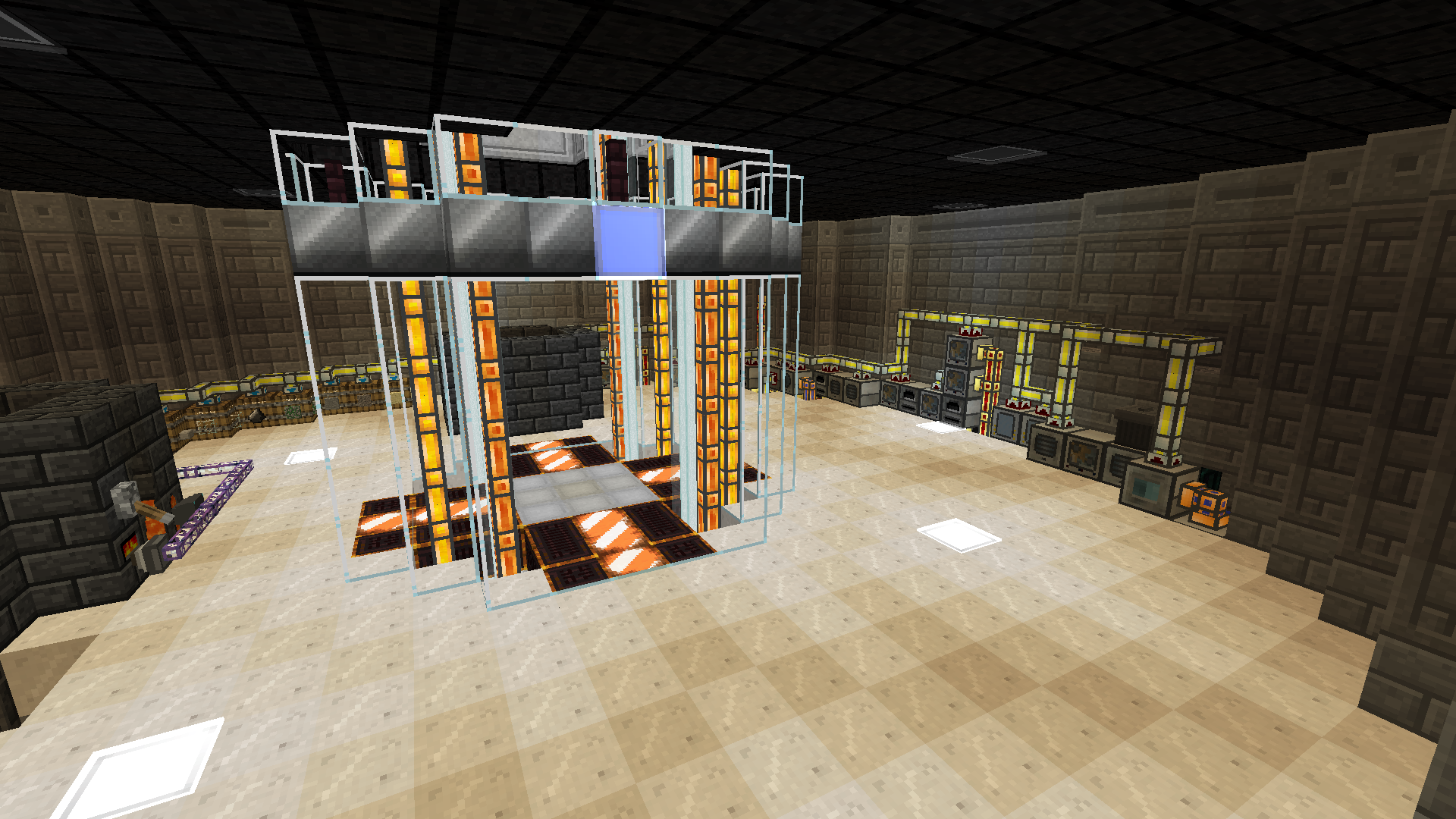 Small update today, just produces pretty much everything possible out of a cobble gen from sand to edged stone bricks(I love cyclic assemblers) to clear glass... Stored in barrels across that back wall.

Smeltery at the back does clear glass, smeltery to the left does Aluminium, Cobalt and Ardite from my mining lasers.

This was really the first level I dug out, did it with a stone pickaxe, was not exactly fun. Can still remember my pulveriser and furnace setup powered by Sterling Engines just below camera shot... Also the last level in the mountain, Level 9(Ars Magica) is the base of the tower you can see in the exterior shot with no windows.
Reactions: hiharryII and ThomazM
S 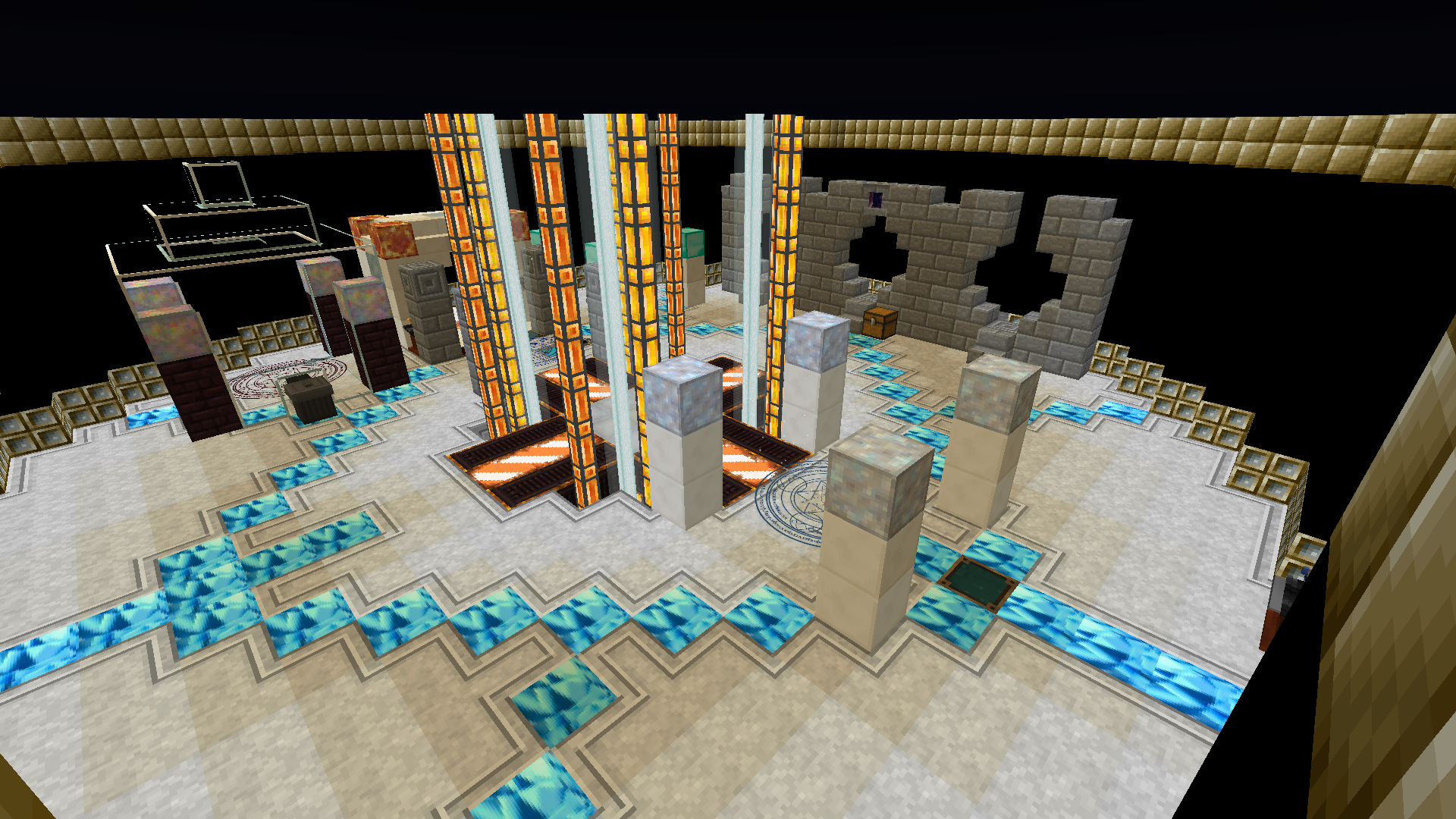 Finally out of the mountain and in the fresh air(why there's no airlock, also 96 drawbridges were enough).

Portals to all the boss spawning locations, one of each nexus and a max tier altar. Dark nexus powered by mobs teleported in from mob farm below, neutral nexus get essence from a deep ocean mystcraft age full of essence through a buildcraft floodgate under the altar. 3 mana batteries in front of the altar holding each type of essence so spells are easy to construct. 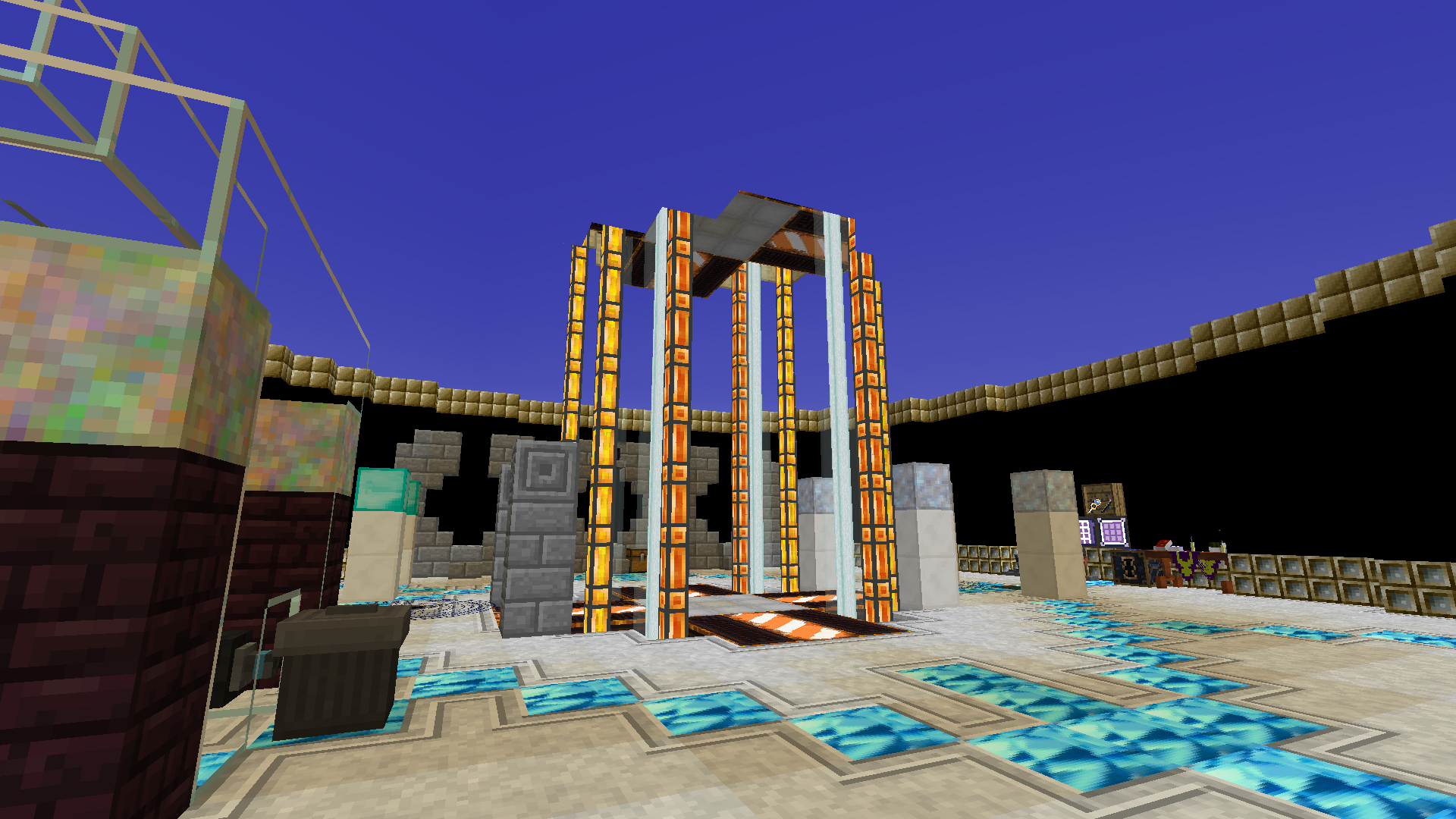 Another angle showing the Skyblock ceiling, walls are painted black. Inspiration came from Direwolf's Thaumcraft room in his last Let's Play(Season 6). Glowstone bricks around the top and bottom of the wall providing the light. Floor done with marble panels and Blue Topaz Blocks.
Reactions: ThomazM
S 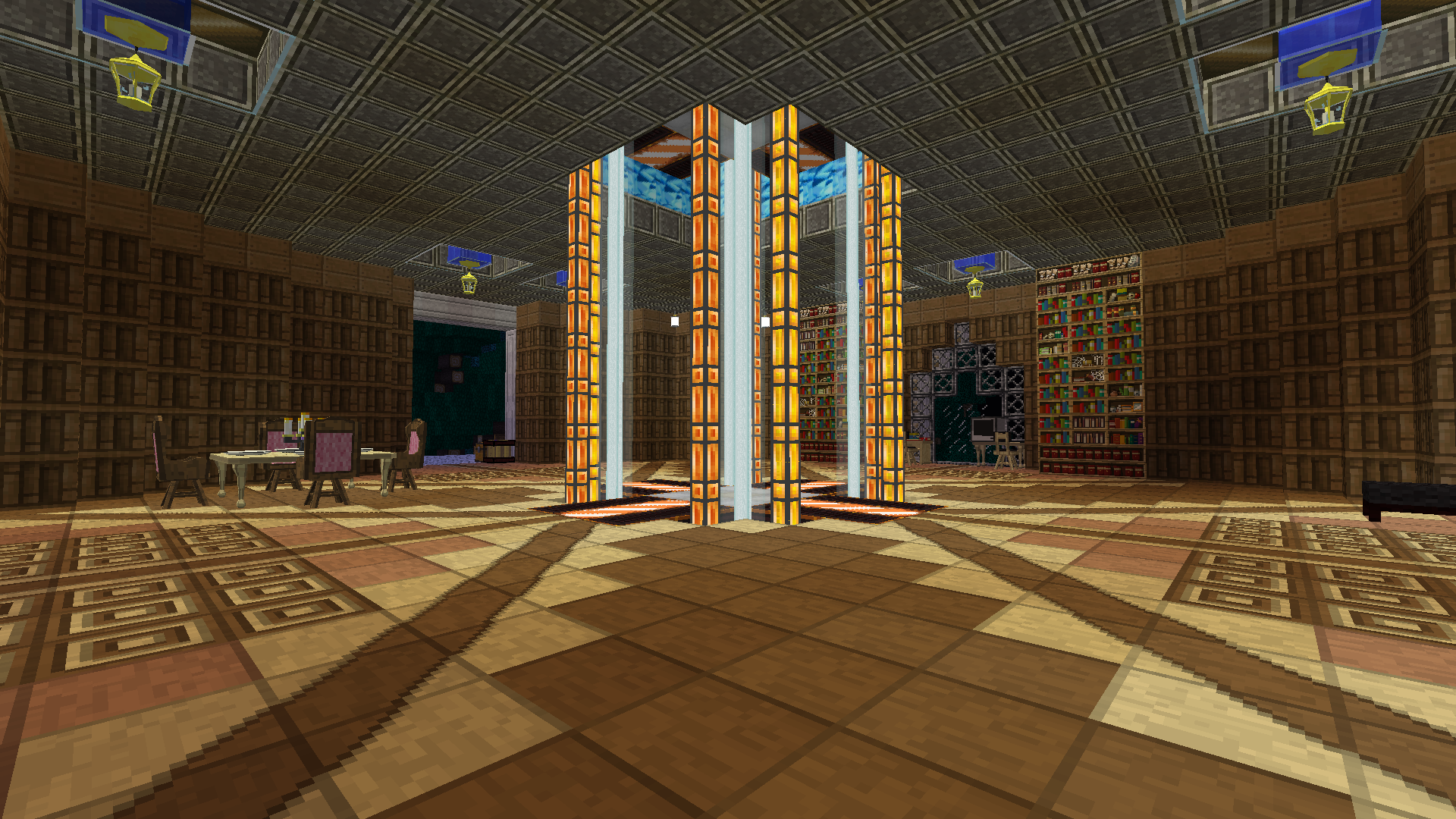 Apologies for the slight delay, blame 30 Seconds To Mars and a plastic bottle of white wine...

No much going on here, just my living quarters and bed, we're now on the second level out the mountain(first layer of windows). Perfectly aesthetic level besides the beds, floor done with the Woodworker you can see by the door, ceiling is Chisel Limestone and walls Chisel planks.

Next up, Mariculture!!!!
Reactions: ThomazM
S 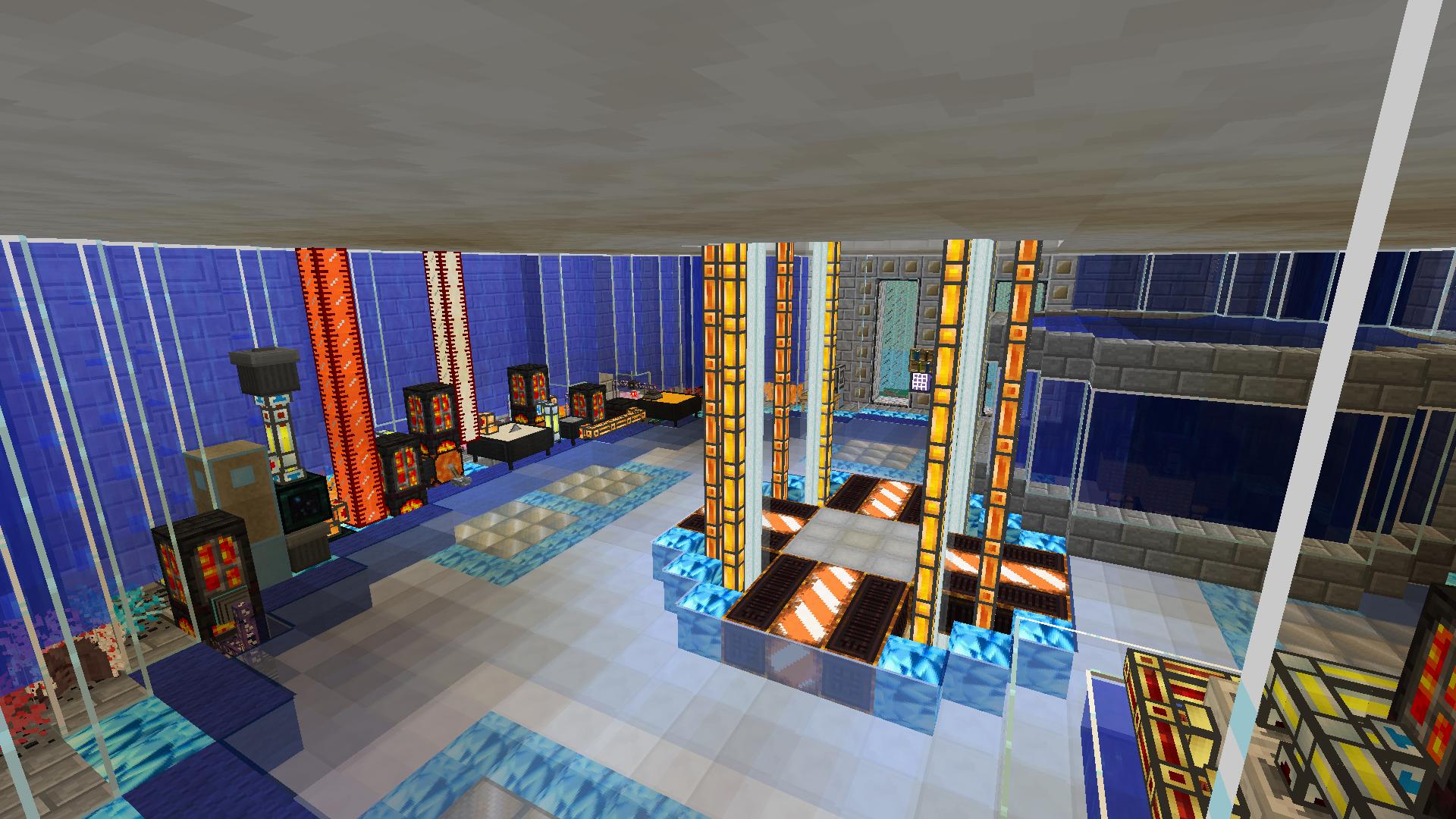 So in this world I promised I would use as many mods as possible in as many interesting ways as possible, so for this level I decided I was going to finish Mariculture so I could get to Koi and use their life drops to power my blood altar.

I had to go through the whole mod for this(except the breeding mechanic, which is horribly broken IMHO), so to the left you can see automated Titanium, fish food and incubation setups. Bottom right of shot is MFR Auto-Fishers into a crucible to make Fish Oil to polish the Titanium rods.

These rods were then used in Mariculture Fishers that used to be above the pool in the back right corner to catch the Koi I needed.

Inside the pool are 4 fish feeders where the Koi breed and produce the Life Drops which are then melted down into blood by the closest crucible on the left and then stored in an Fluid Cell which can export into the blood altar. 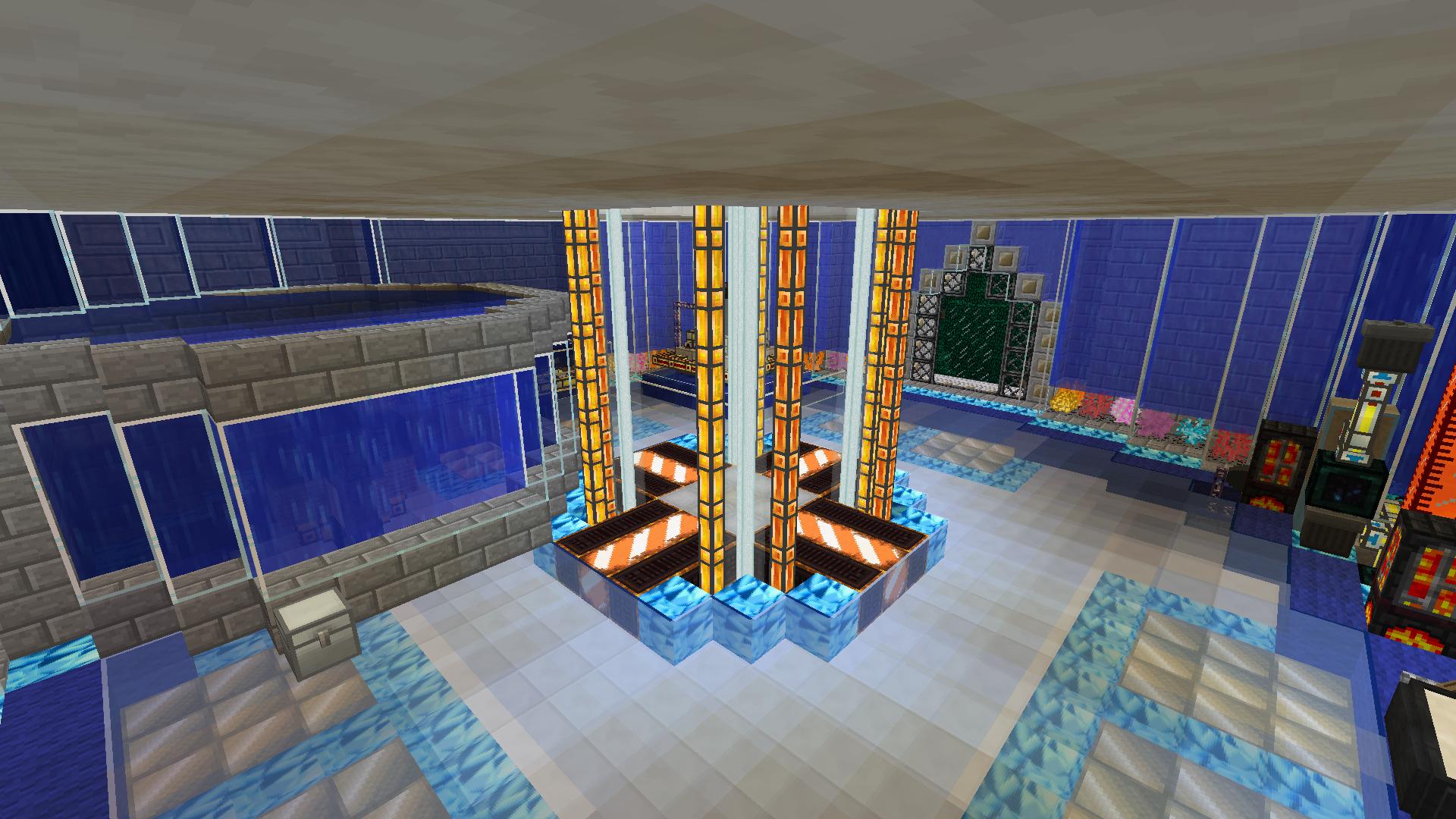 Just another shot from the other side of the room, floors are Chisel glowstone, blue topaz, clear glass and Chisel gold blocks with blue wool around the edges to hide pipes etc.
Walls are clear glass with flowing water above Mariculture Coral planted on coral beds so it will spread. Ceiling is Chisel glowstone, was tring to make this floor look like you were in a swimming pool. 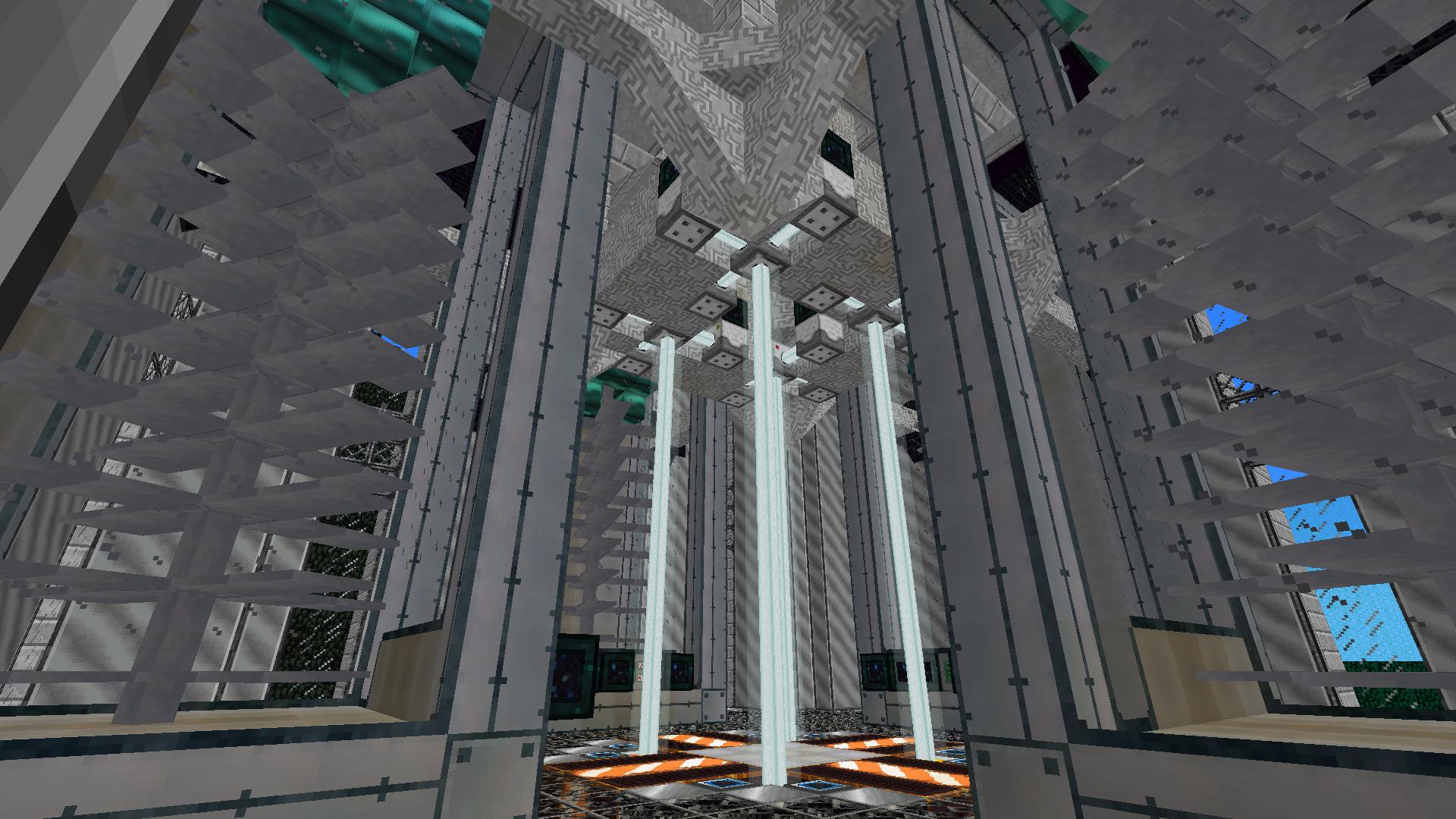 Love how this room turned out, 4 max BR Turbines each producing 22k RF/t. 4 mining lasers each with only 3 prechargers tho as that's all I could fit.

Steam In, water out and power out all handled through Tesseracts. 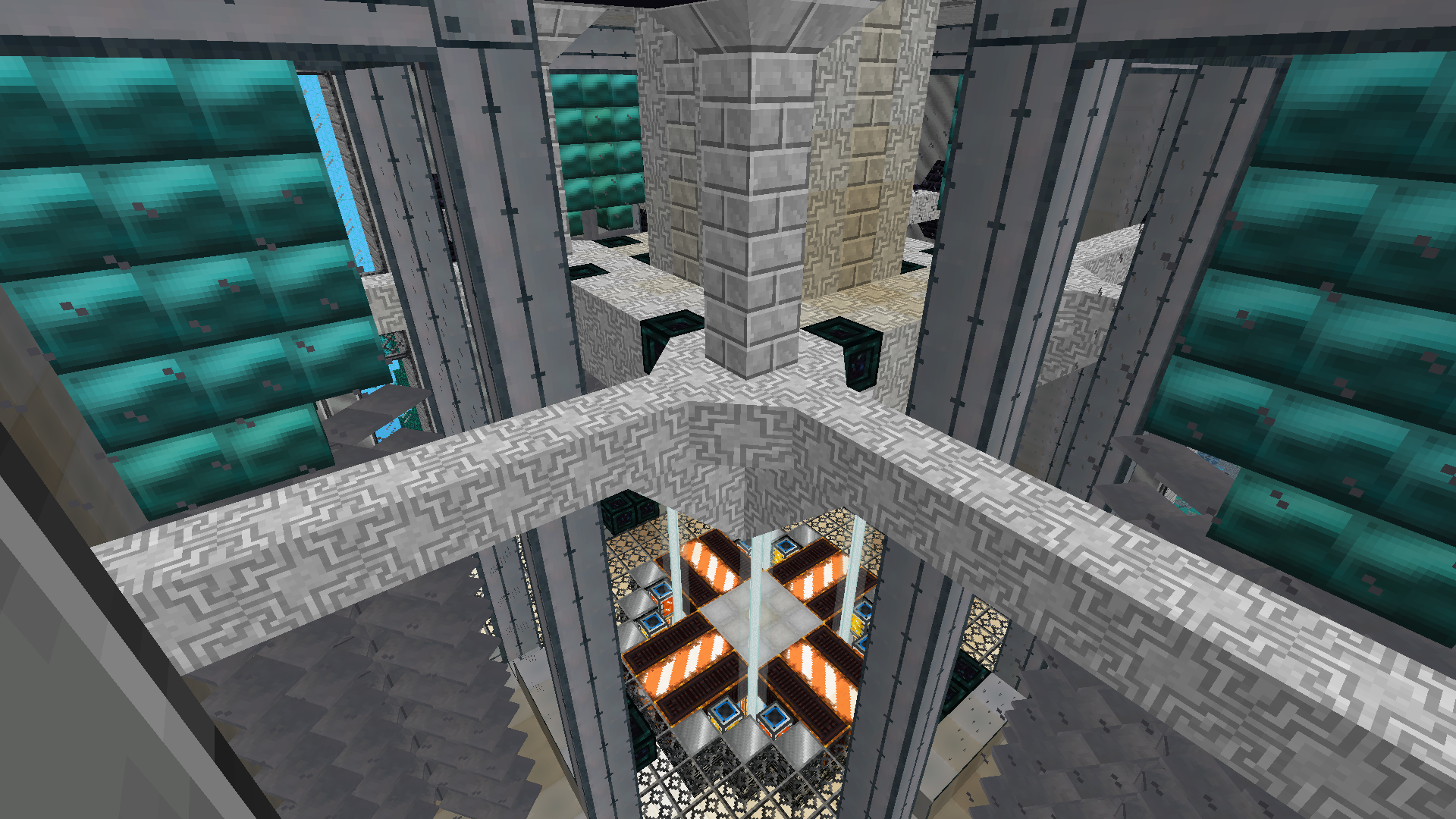 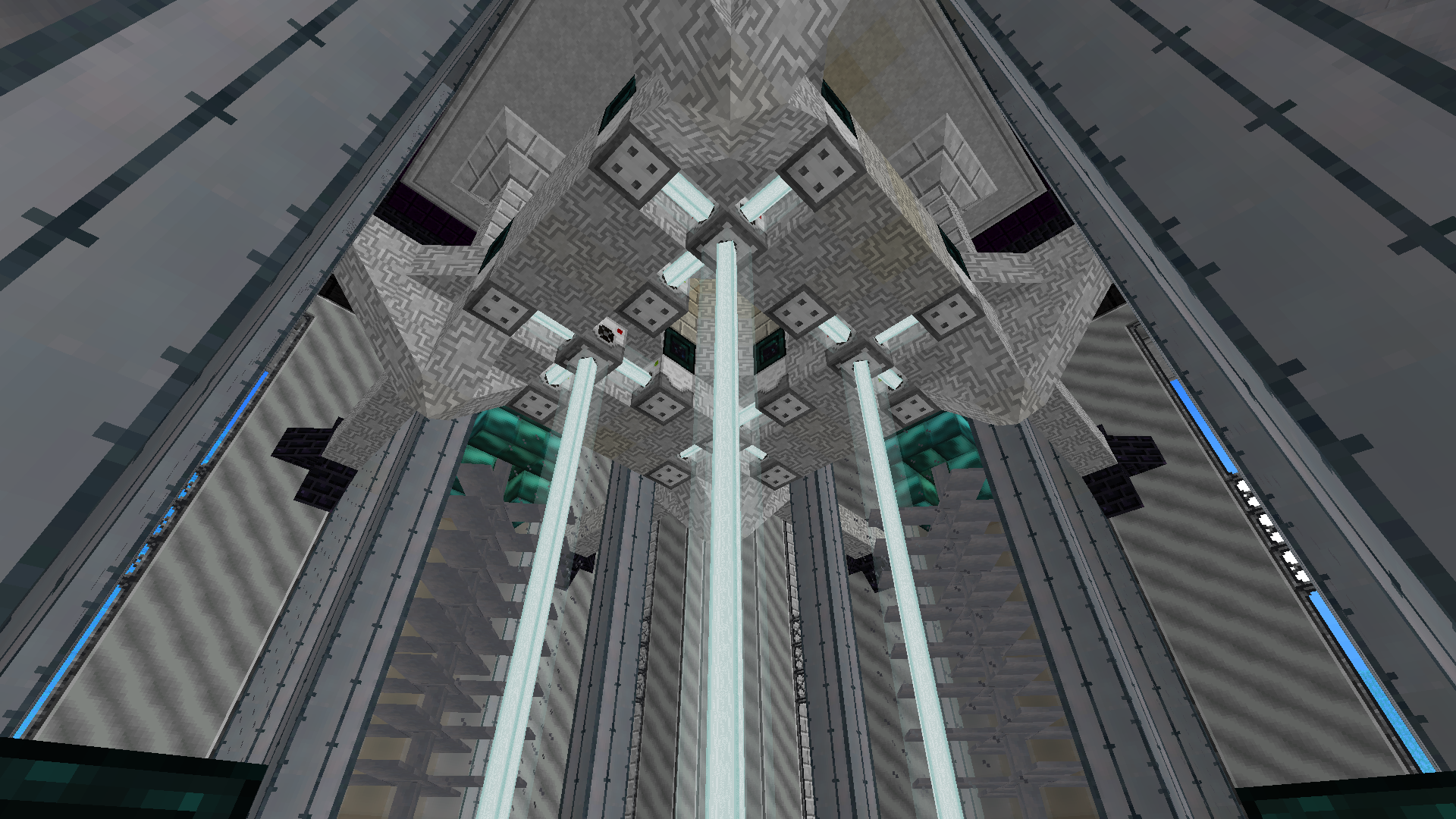 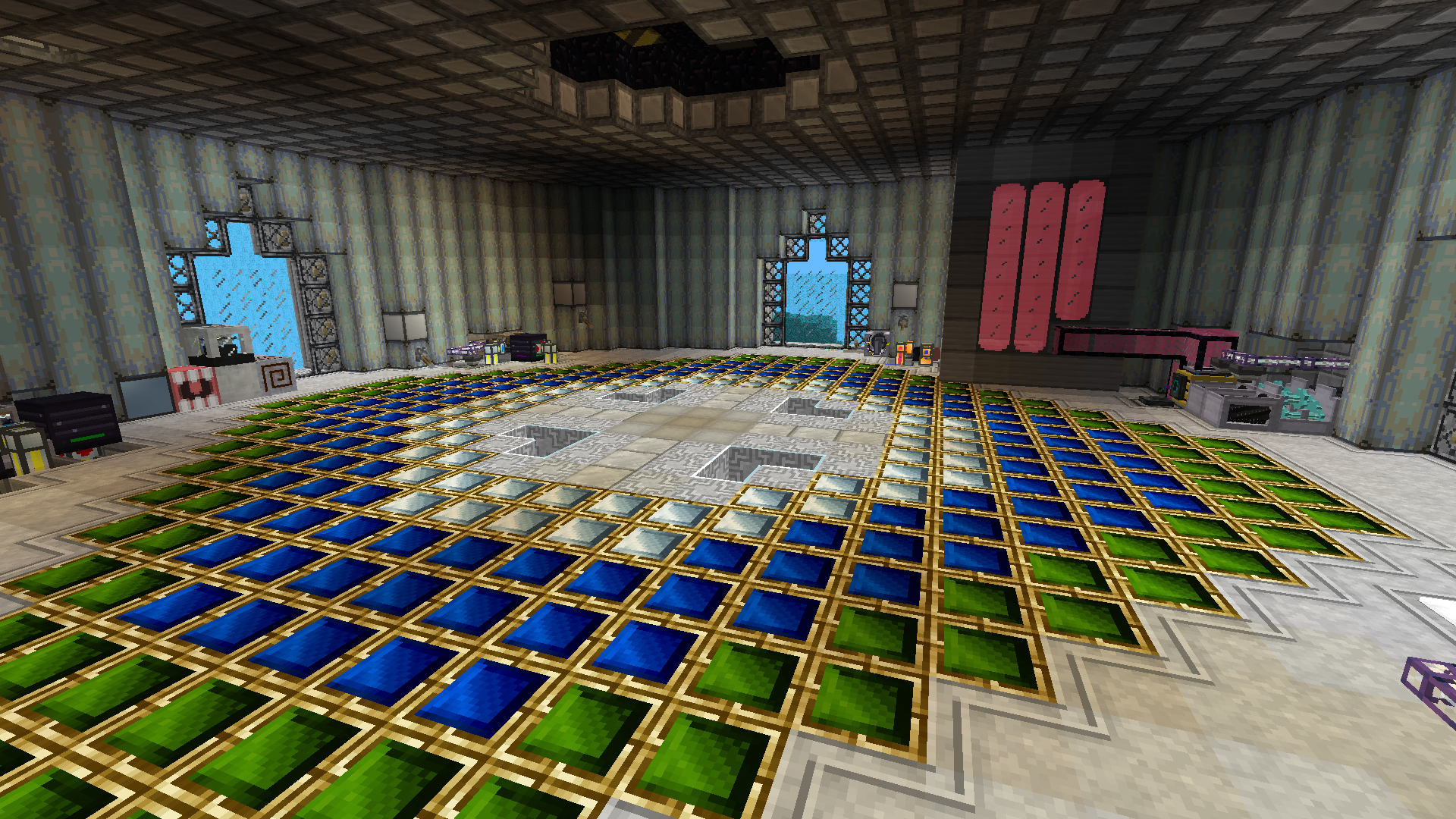 Went thru the whole of Rotarycraft to get to Gas Turbines and Bedrock Gearboxes powering 4 separate Extractors(one for each stage, using factorisation routers to pull intermediate products) so I could multiply the Ammonium Chloride and Calcite to make an Ammonia high pressure Reactorcraft turbine.

Jet fuel prod and Pulse Jet Furnace on the right, extractors to the left. Each stage independently redstone controlled. 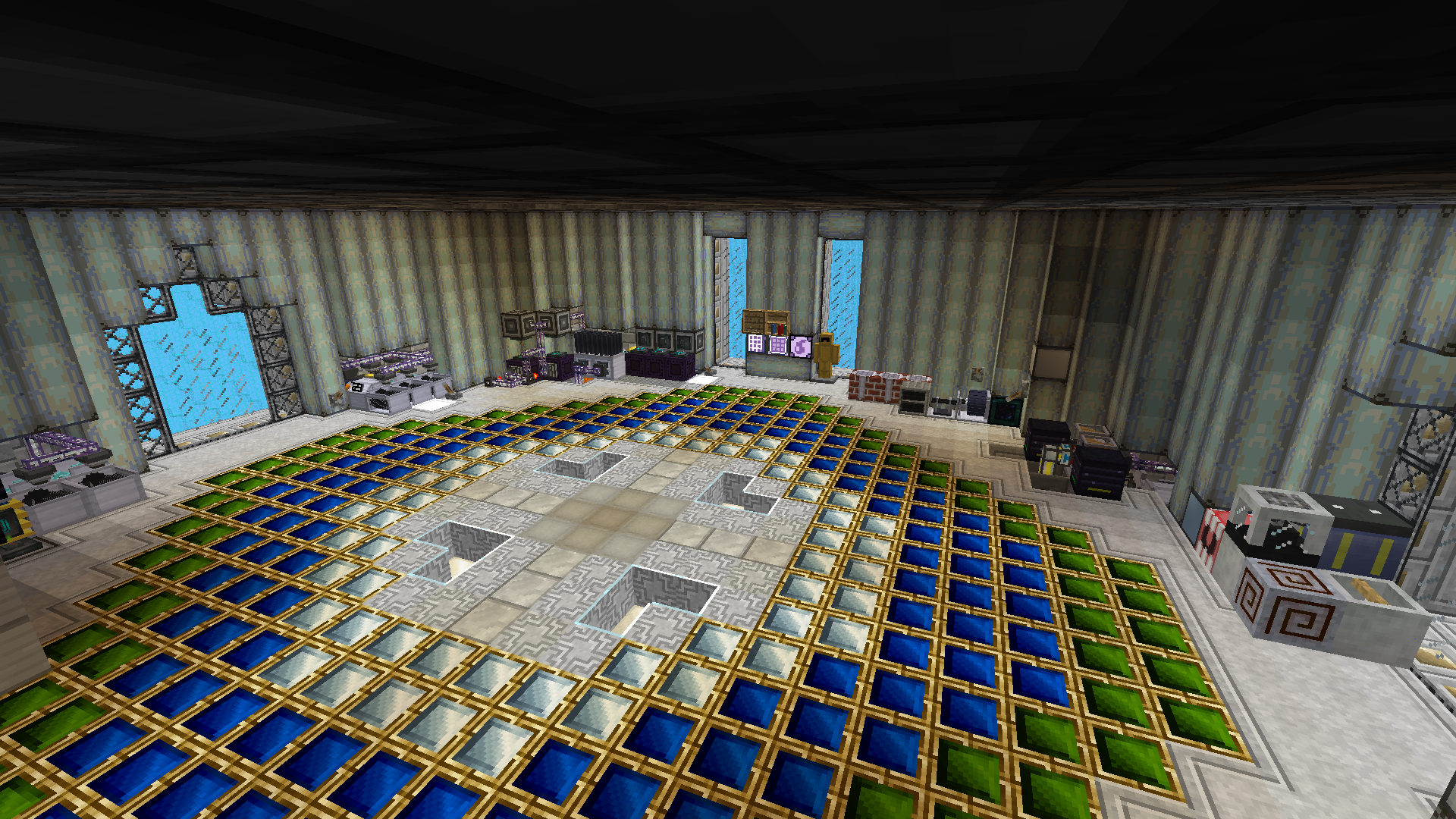 A view of the other half of the room, first 2 extractor stages, yeast and ethanol production(had to use transvector interfaces to automate as magic biome I'm in was too cool), blast furnaces etc. The band around the tower is at floor level to hide all the engines, gearboxes and Tesseracts as each machine has it's own power supply. Also factorisation setup so I could make parts for the routers.

Looking at pics this room is quite bare, wish RC had some multiblocks to play with but oh well!

One up we have Reactorcraft Reactors! Only 2 more floors!
S 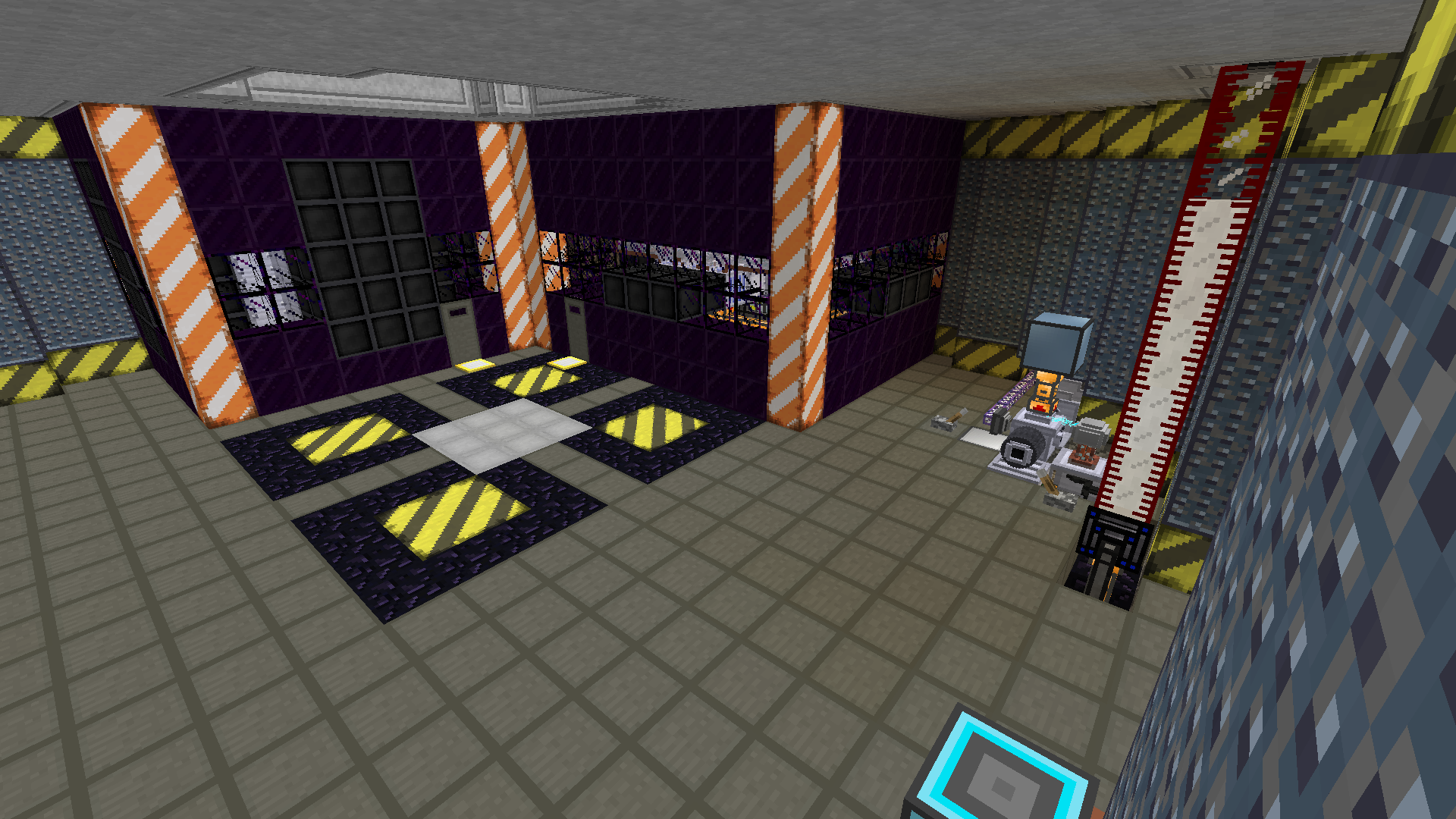 And so we finally get to the reactors, fission on the left and breeder on the right.

Fission reactor uses the 7x7 square design from here:http://forum.feed-the-beast.com/threads/reactorcraft-fission-reactor-designs.47199/ (top, middle of image), however it's stacked 5 high as can be seen from the Neutron reflectors in the bunker wall. Breeder uses same design however reflectors are replaced with neutron enrichers and then reflectors are placed one block further out.

Bunkers are made with warded obsidian blocks, floor out of IC2 reinforced stone and a layer under it of obsidian. There's also a forcefield that sits in the bunker walls. Maybe I should blow one of the reactors up and see what happens?

Setup on the right of the image is the Molten Sodium production which then feeds into the breeder, fed back from heat exchangers into that tank and electrolyser will auto-start if that tank empties for some reason. 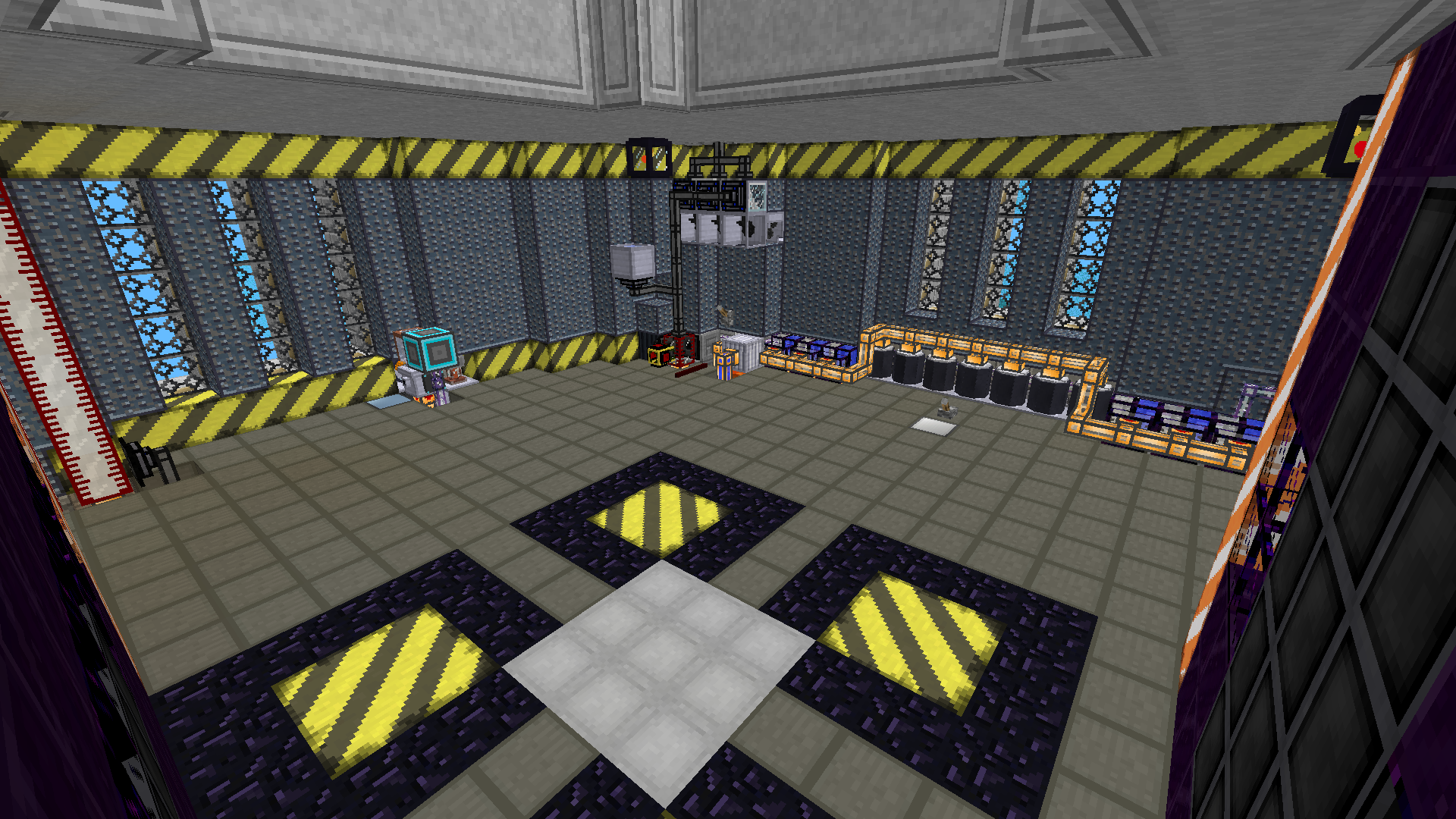 A view of the reactorcraft processing line, uranium, deuterium and ammonia production.

Centrifuges each powered by a Microturbine. Deuterium production center of shot behind the fluid interface, heavy water comes from a mystcraft age cos for some reason my world didn't gen with any oceans in it Well it used to, a TC Dark node changed the biome so stopped working, fml...

Ammonia production on the right to feed fission reactor and HP turbine upstairs, compressors on the wall powered by teir 5 magnetostatics to turn Low Pressure Ammonia back into Ammonia and feed into the buildcraft buffer tank. When tank is empty it activates Ammonia production.

At least that's how it's supposed to work however I've found it's impossible to make a closed loop ammonia HP Turbine so don't even bother, so I have a creative Vat of Ammonia there with a transfer node and 16 speed upgrades in it(yup that's how much Ammonia "disappears") to feed into the reactor. I'm on the verge of a rant now so will leave it there, Reactorcraft is a great mod but let's say it's "unfinished".

And finally... Next time we're on the last level, the turbine!
P

Anyone wanna see the last level?
Click to expand... 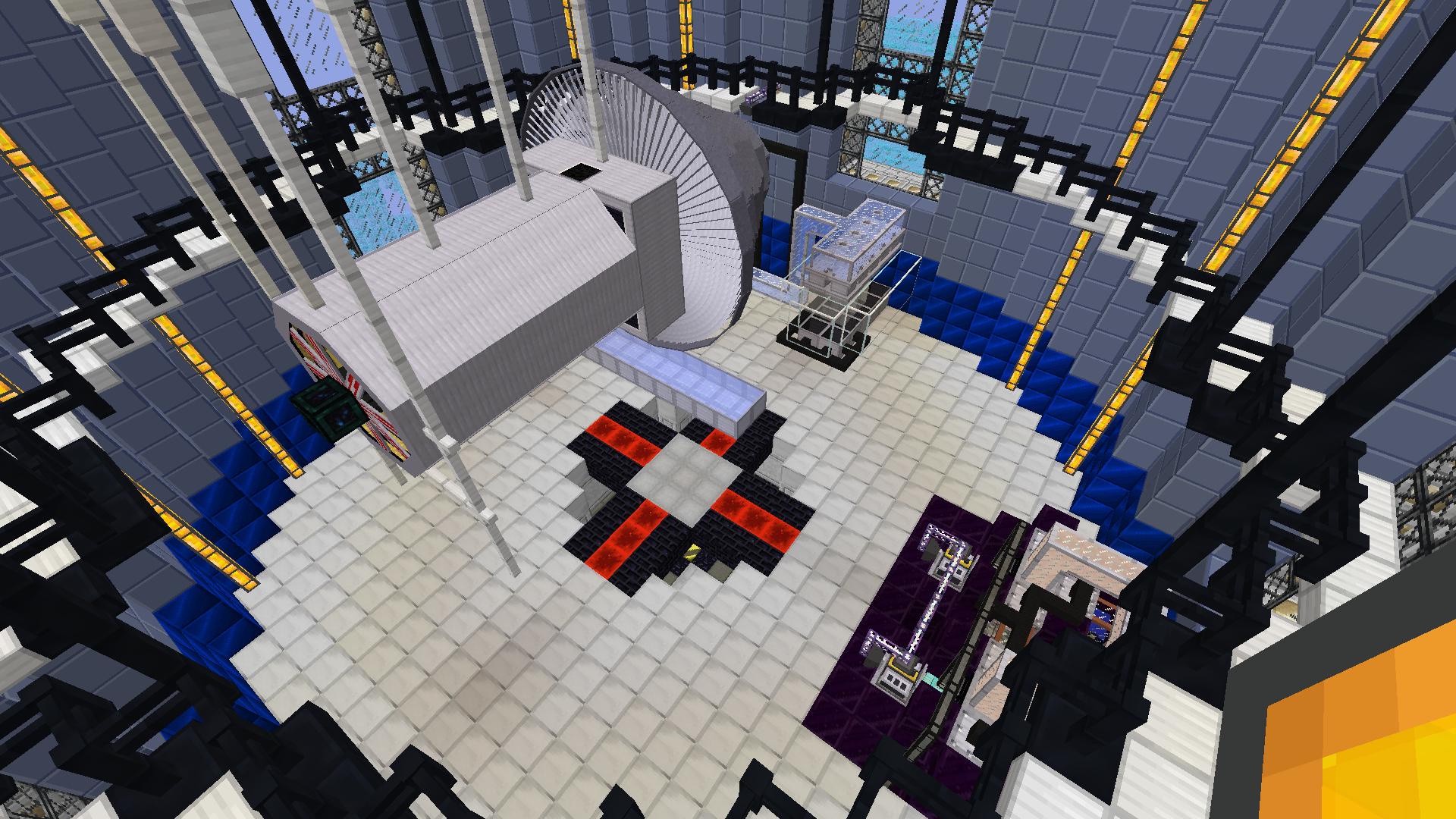 And there's the big girl

Next to it are steam grates as I was producing waaaay more ammonia steam than required and trying to make it closed loop I needed to get the steam out of the lines.

I did the entire of Rotary and Reactorcraft to get to this point, all to power the exterior forcefield

Bottom right of shot you can see the Hot Molten Sodium and Heat exchangers, steam just builds up in the lines cos they can hold infinite of it. That ridiculous design choice gave me so much trouble in the HP Turbine build I decided to exploit the hell out of it so I didn't have to build more turbines(besides, who needs more than 2 300 000RF/t).

They say all works of art are never finished only abandoned... Same is true here, had so much more to do but world is too laggy to play now. A shame

Was a good build. Good luck on your next one!