I'm in a pack with magical seeds, so even the most unusual and unlikely reactors are viable as the resources don't really cost me anything.

Are there any IC2 reactor plans out that that actually use things like the irridium neutron reflectors?
G

Personally, Ive played with them a bit. Bit Ive never found them that practical. They really boost the efficiency - and hence heat output - of a Fuel Cell, but also restrict the directions you can distribute heat out the cell.

As such, they are easiest to work with by designing a reactor where the heat gets pumped into and out of the hull, rather than distributed from the fuel cell into surrounding components.

i.e. if we surround a Quad Fuel Cell with 4 reflectors - that will be the base efficiency of 3, +4 combined for each of the reflectors for the maximum attainable efficiency of 7x.
This is going to be dumping a massive 448 heat into the hull however.

The cooling component with the biggest hull draw is the Reactor Heat Exchanger: it pulls 72 hU/s. But you need to get the heat out of the thing which is complicated. The next best is the Overclocked Heat Vent - which draws 36 hU/s from the hull, but only vents 20 hU/s. We can fix this by surrounding each one with Component Heat Vents - which can draw 4hU/s from each surrounding component and vent it. 4 Component Heat Vents would together vent 16 hU/s - exactly the excess we have in the Overclocked Heat Vent.

If we tile that into a grid, with the Fuel Cell and Reflectors in a corner, we can clear out 432 hU/s from the hull - leaving another 16hU/s to cater for: so we can just cram some Reactor Heat Vents into the gaps along the edge to cater for that.

Here it is in the old reactor planner. A modern IC2 version will have the Uranium Fuel cell last twice this, so 56,000,000EU is your total output from a single quad cell. 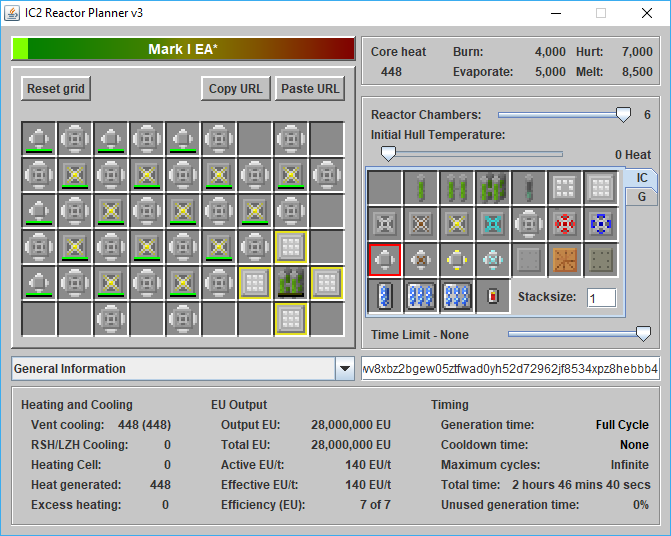 Slap in 10 metal plates, or just some more vents as generic fill for paranoia's sake, and this would be rather insanely efficient indeed.

Looks like that's happy enough to run constantly without any issue. I think I'd quite happily use a reactor like this in most playthroughs, as I do tend to get enough iridium eventually. Course in lost souls I don't need 7 of 7 efficiency, because I've also got mystic seeds that will grow me uranium. Maybe I should look into a large number of highly inefficent fast running large payout single reactors, hrm... I can waste more materials, but making 20 or 30...
Reactions: GamerwithnoGame
G

Now you made me spend the whole weekend trying to see if I can maximise the amount of hull cooling one can get from overclocked heat vents. Its very tricky as any OCHV on the edge are going to have an excess 4hU/s - 8hU/s if in a corner. which means you must route the excess into the reactor grid elsewhere, sacrificing another side, so now you have 8/12 extra hU/s to deal with. Which you can only shunt into another OCHV - which in turn has its own problems pulling heat from the hull. So now Im trying to see if I can make a sale regulating grid - because the different reactor planners are giving different results if I have islands of OCHVs that are not connected - even if the total venting should cater for the hull heat.
Urgh.

I did end up looking at the 7 Fuel cell 420 EU/t reactor, and did finally understand how it works. Its actually a 'completely normal' 6 Quad reactor squashed into the bottom right corner - where each Quad Fuel Cell is being directly cooled by 4 Overclocked Heat Vents.
Squashing it into the lower right corner makes just enough space for a small - single Quad - hull cooled reactor.

This little thing is hiding in the top left corner. 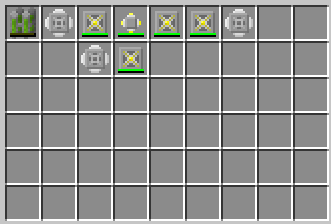 A fantastic example of asymmetrical cooling in an IC2 reactor as this thing only works because its vents are the first vents IC2 distributes heat to. Any other rotation of the 420 would result in the vents that are involved in direct cooling being given the hull heat and being unable to cope.
Last edited: Jun 11, 2018
Reactions: Pyure, GamerwithnoGame and ICountFrom0
G

I now know things about heat distribution in reactors I wish I didn't. Good grief its a mess.