This will be a journal of my current playthrough of the Infinity Evolved pack in expert mode. I am relatively proficient with most mods, and can generally create quite good looking designs too.

I'm not starting from the beginning because I only joined the forums after a few weeks of playing this pack. So here's a brief overview of what's happened so far:

My current situation involves a moderate amount of many resources, quite a lot of simple machinery, and a severe iron and copper recession. I'm currently in the process of preparing to construct and move into a new, much larger base.

Plans for the new base (for which I will think of a name later) are as follows:
Future posts will include images.
Last edited: Jan 7, 2017
Reactions: Tianyulong and Hurst_Quayzar
H

Look forward to the pics...
E

Hurst_Quayzar said:
Look forward to the pics...
Click to expand...

I ended up being too busy to play tonight (revision for a test tomorrow) so I'll be uploading them tomorrow instead. The current state of things is nothing special; the best looking structure so far is the greenhouse, and that's just a cuboid made of dark oak planks and some chiseled glass. If you mean the pics of my new base, that has yet to be constructed, but I hope to surpass expectations of aesthetics.
Reactions: Hurst_Quayzar
E

An update, with images:

Here is my first base, which I have decided to simply name 9Cell: 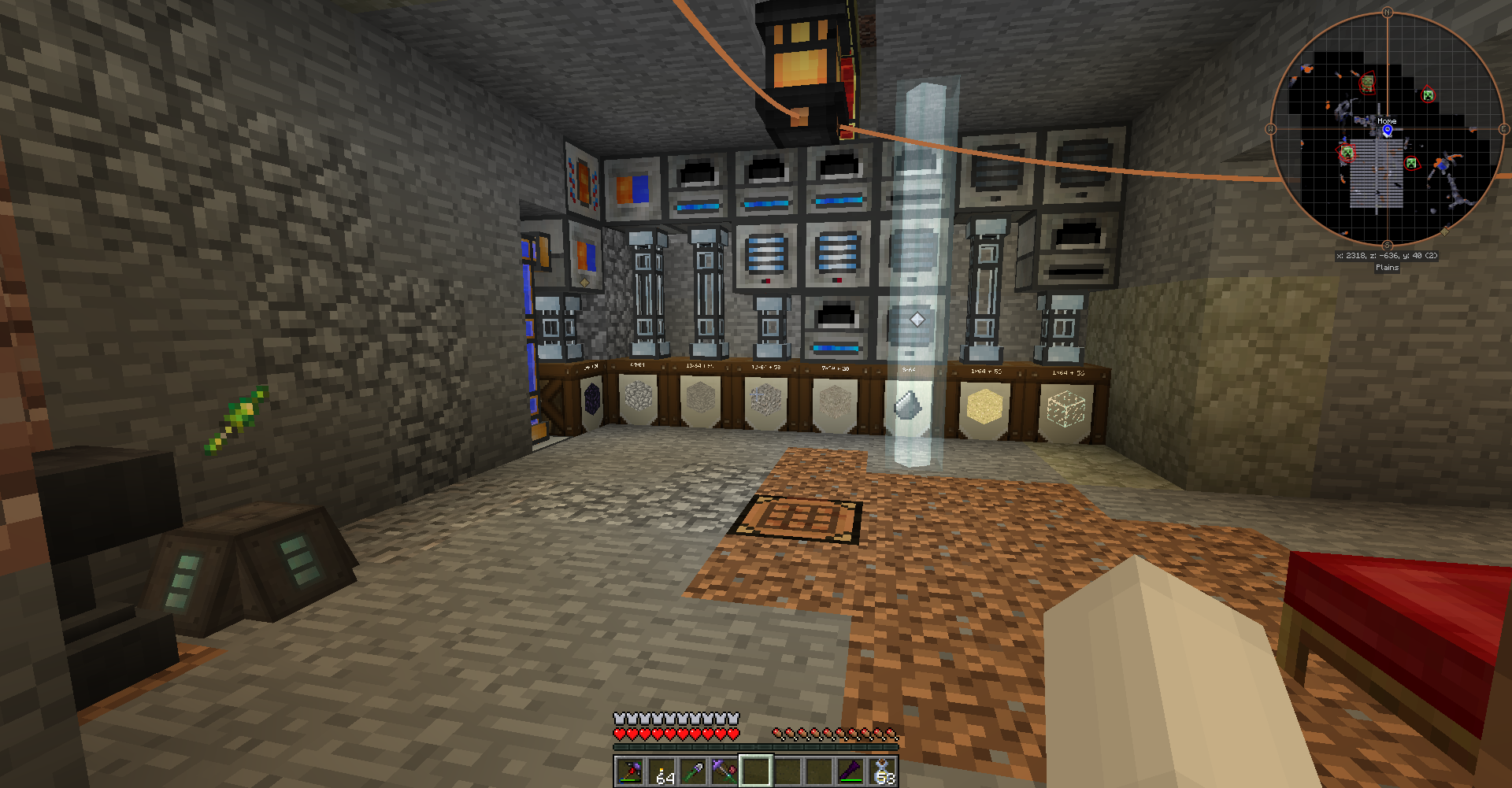 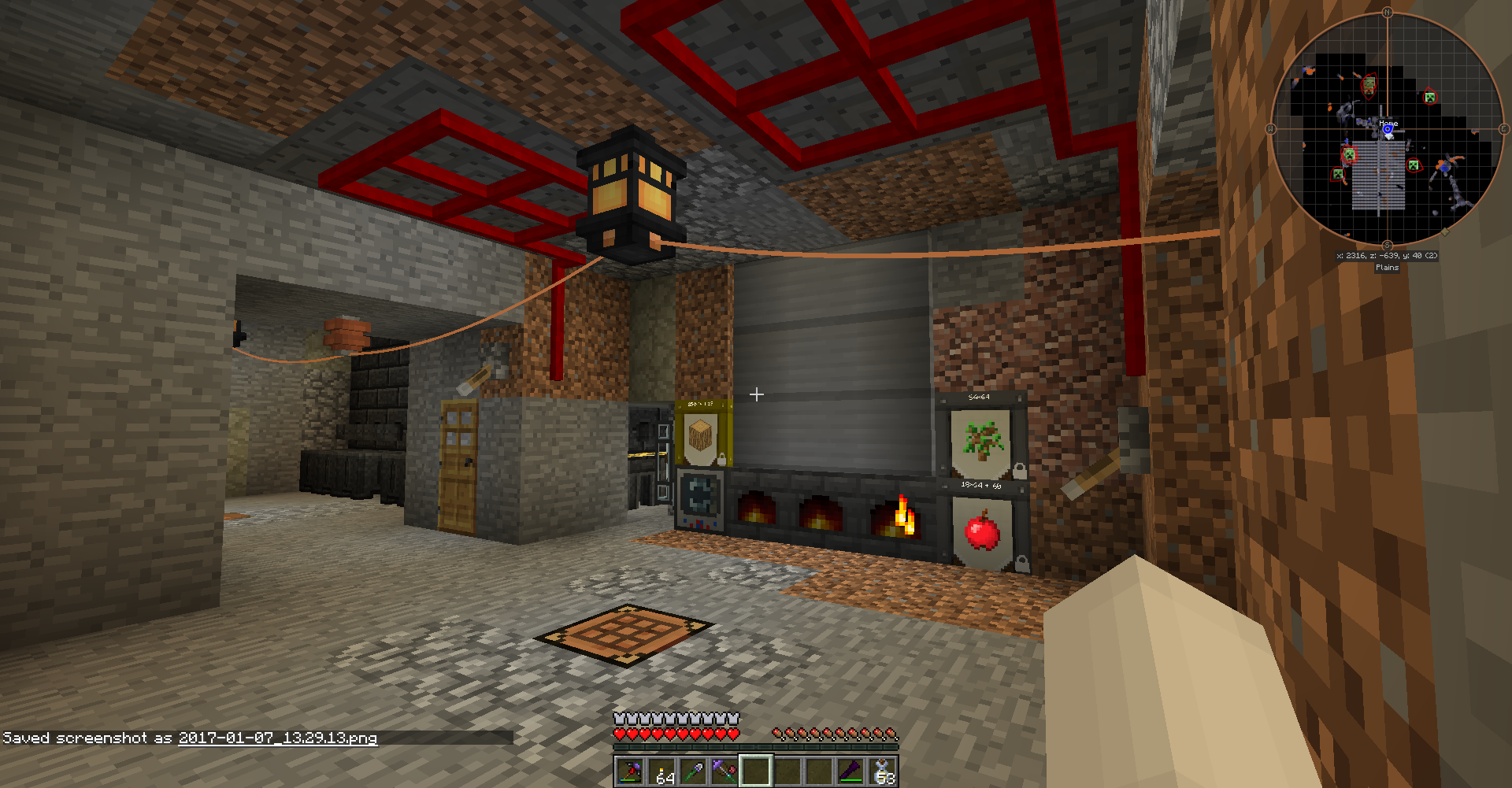 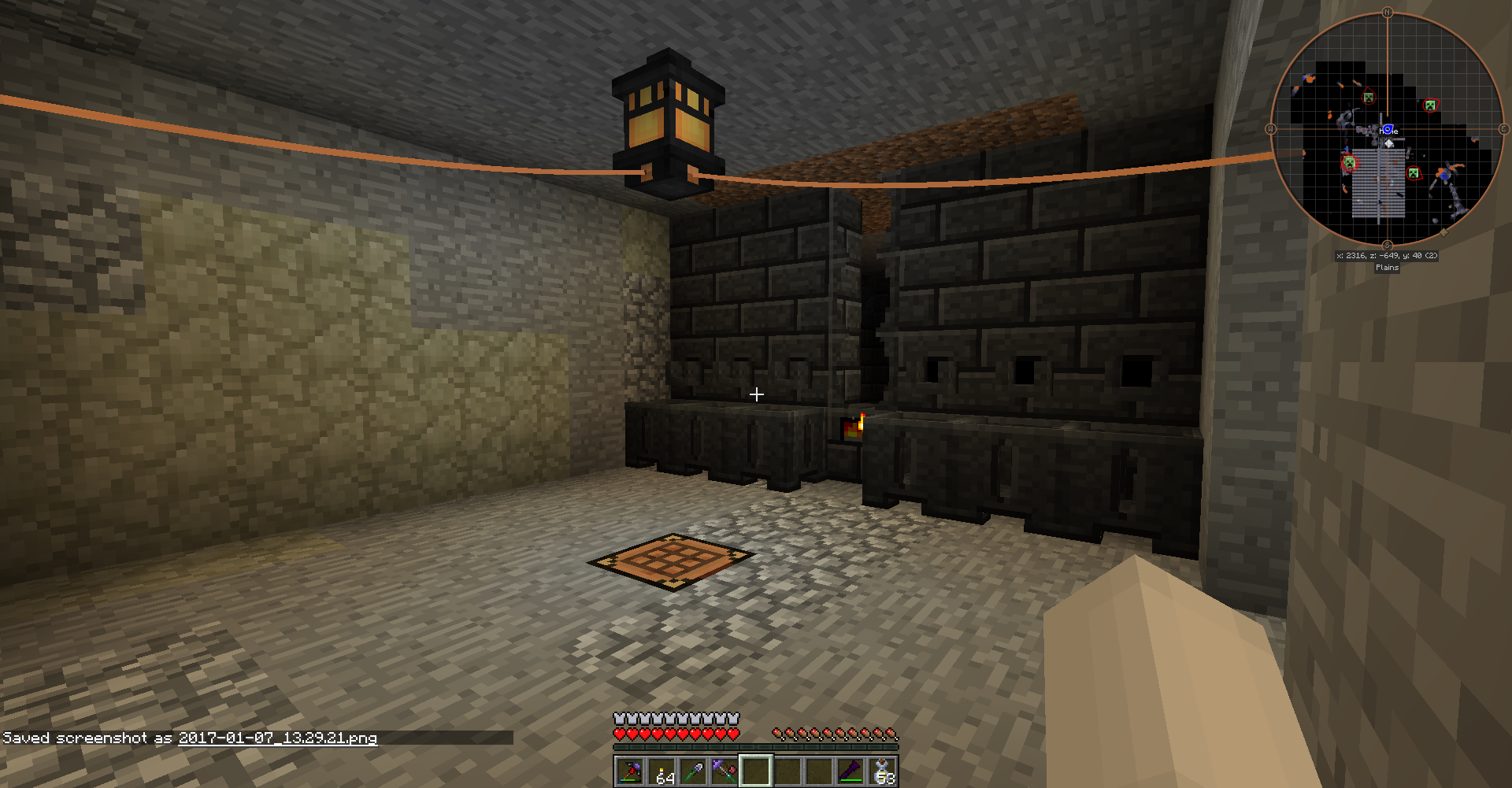 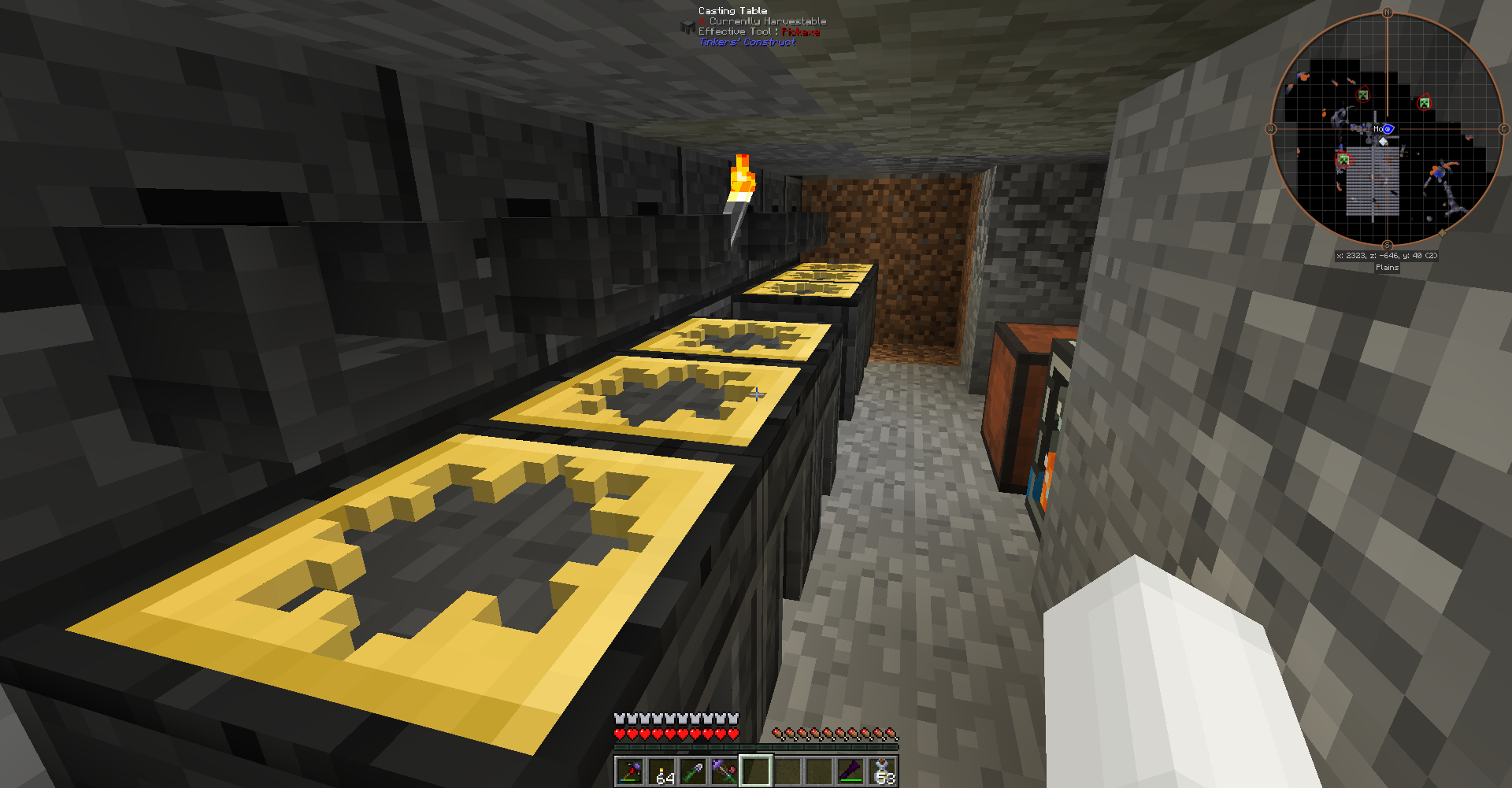 Cell NE. Contains smeltery. Also shown is the maintenance tunnel behind the smeltery, where the casting equipment currently is. Lava tank is central on this side. 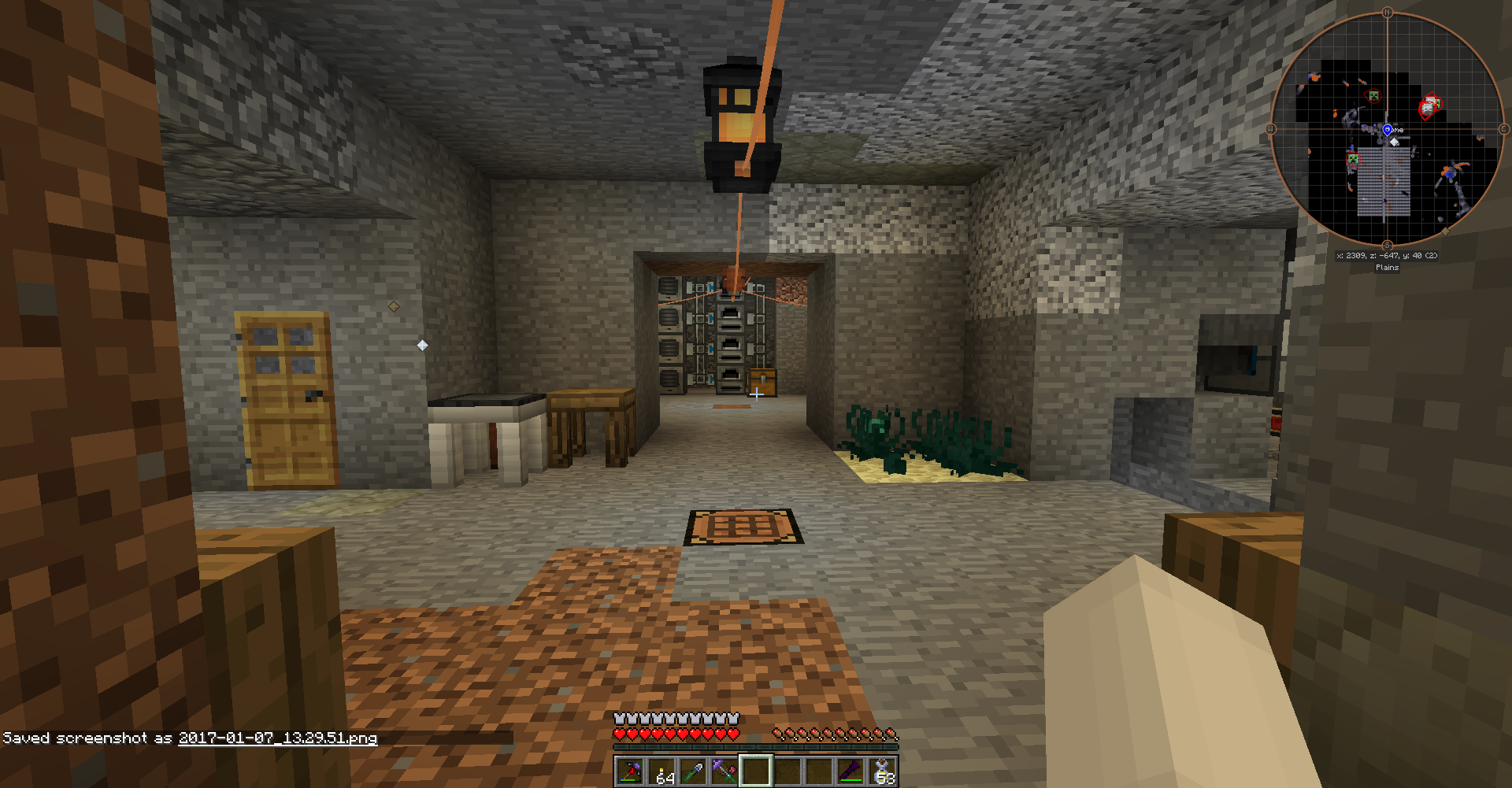 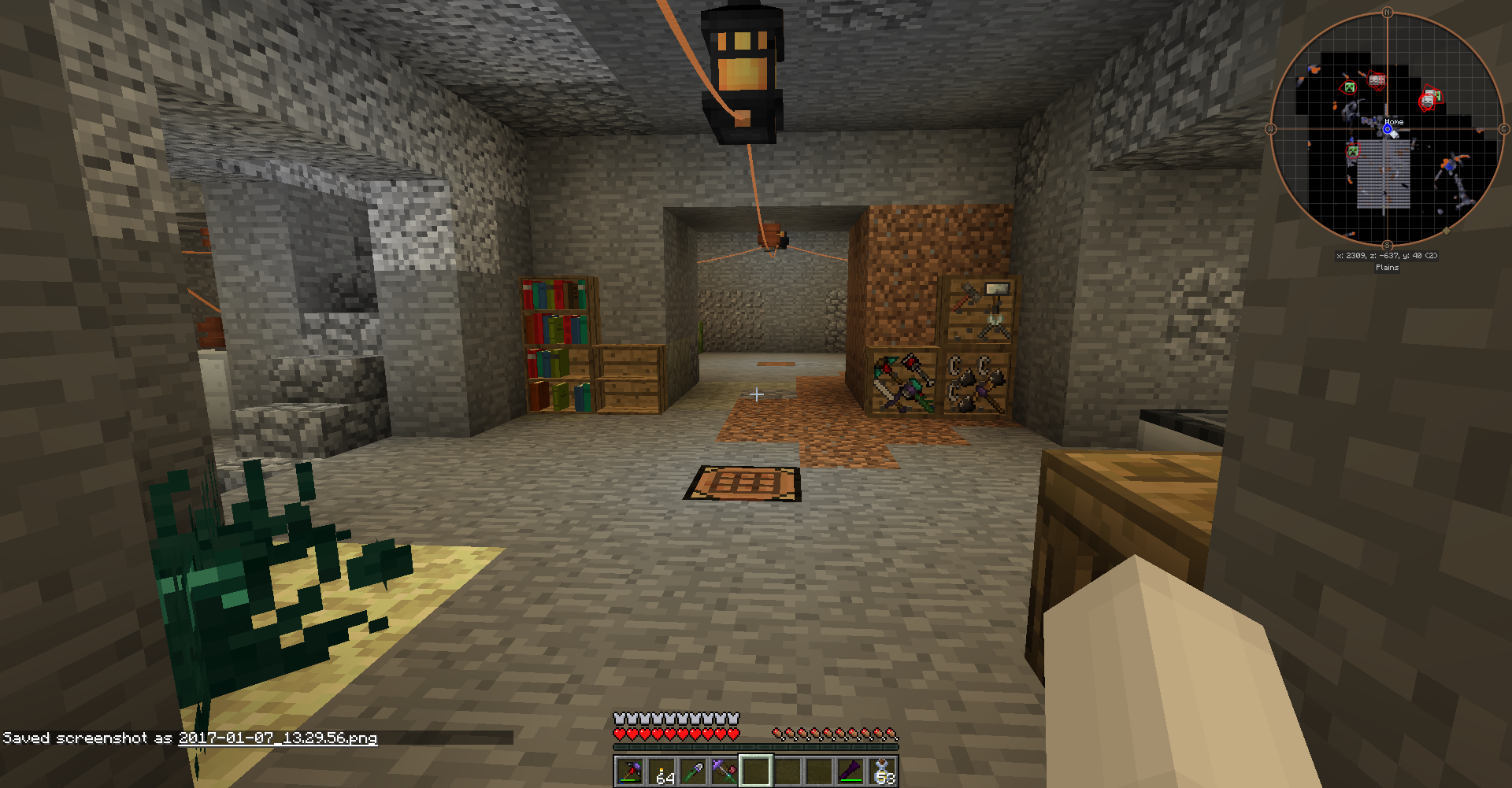 Cell C (two angles). Contains bookshelves, tool racks, tool-making equipment, and ender pearl farm. The door to the left in the first image leads to the wiring maintenance tunnel above the base. 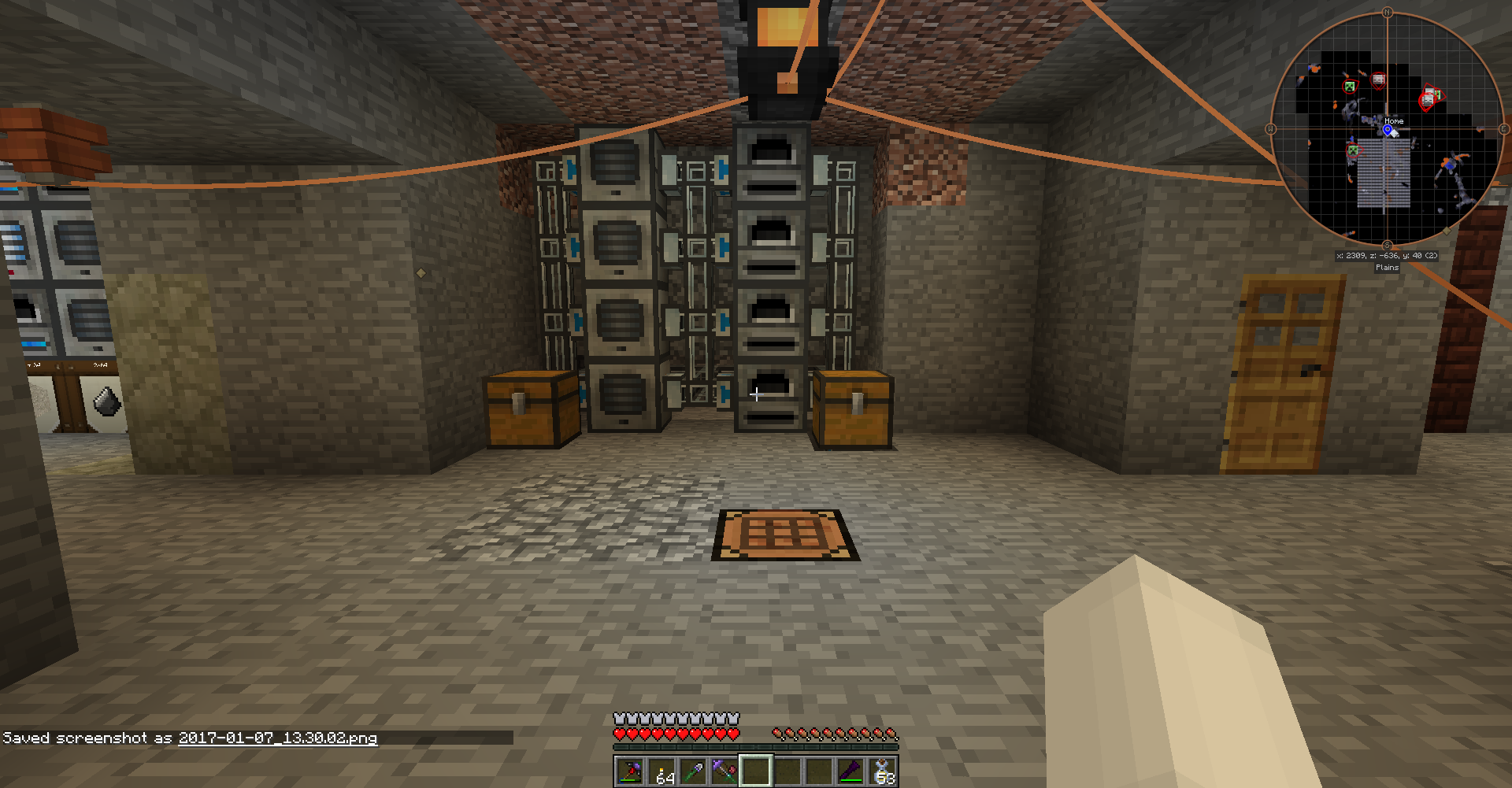 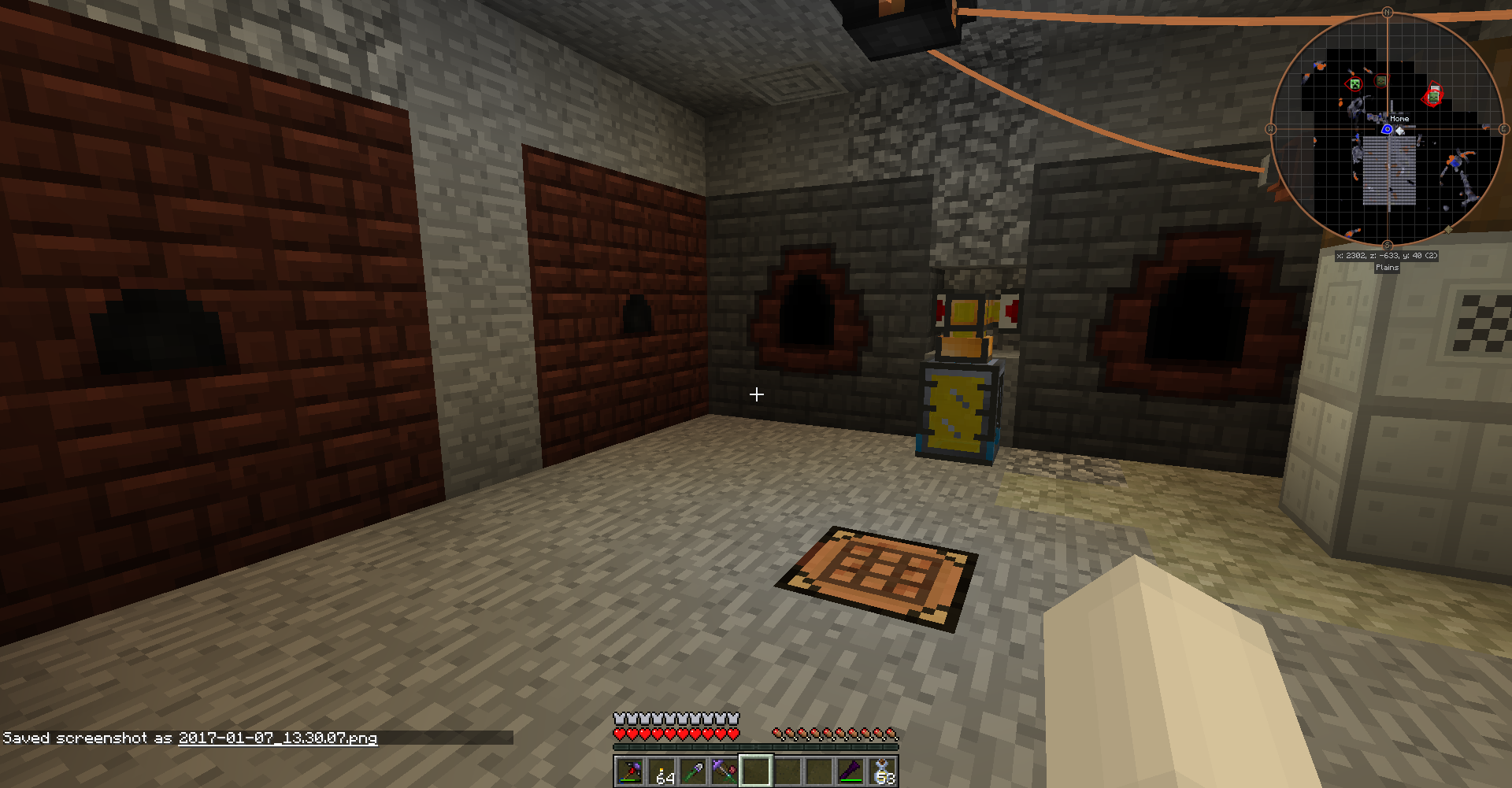 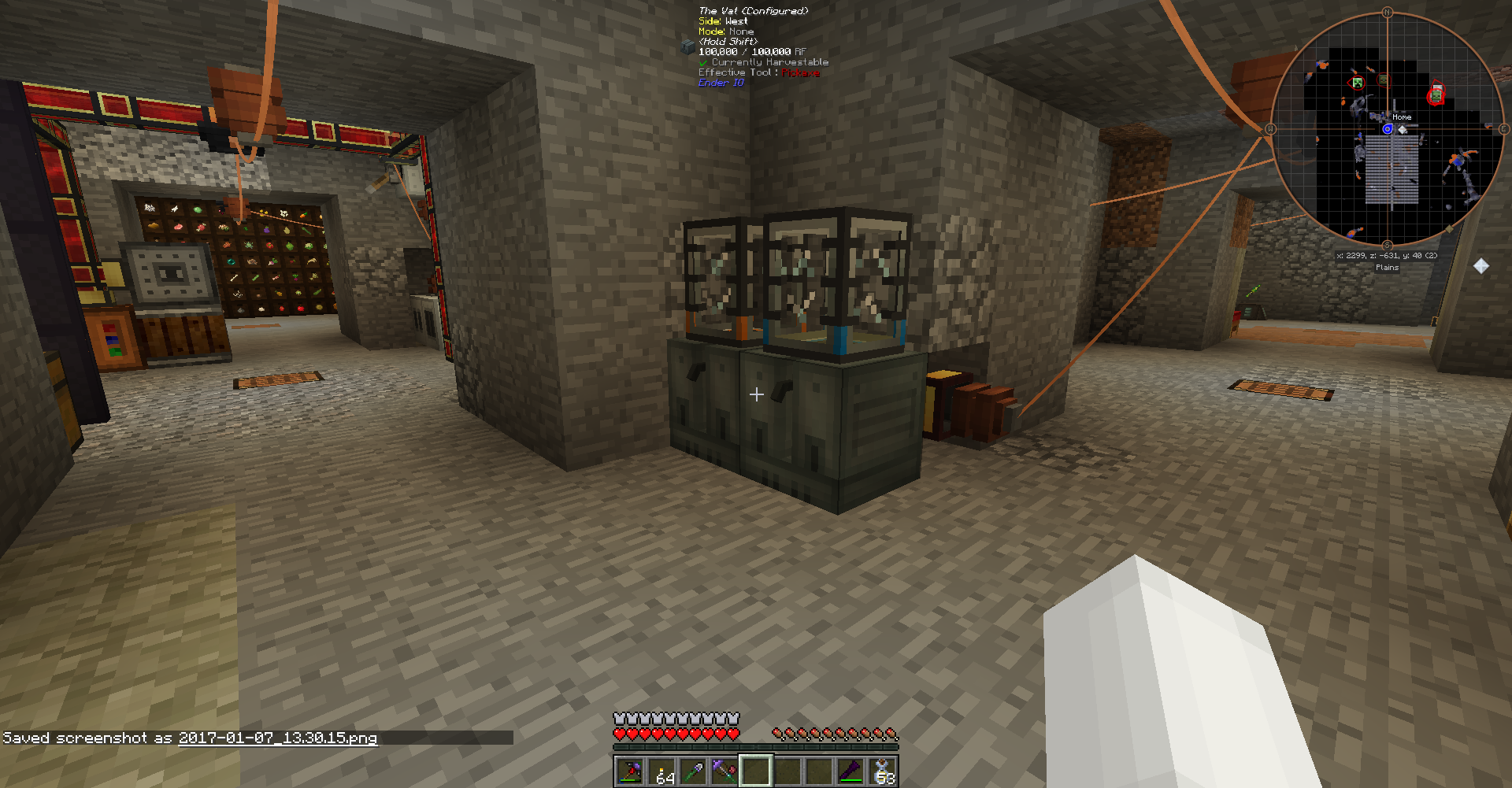 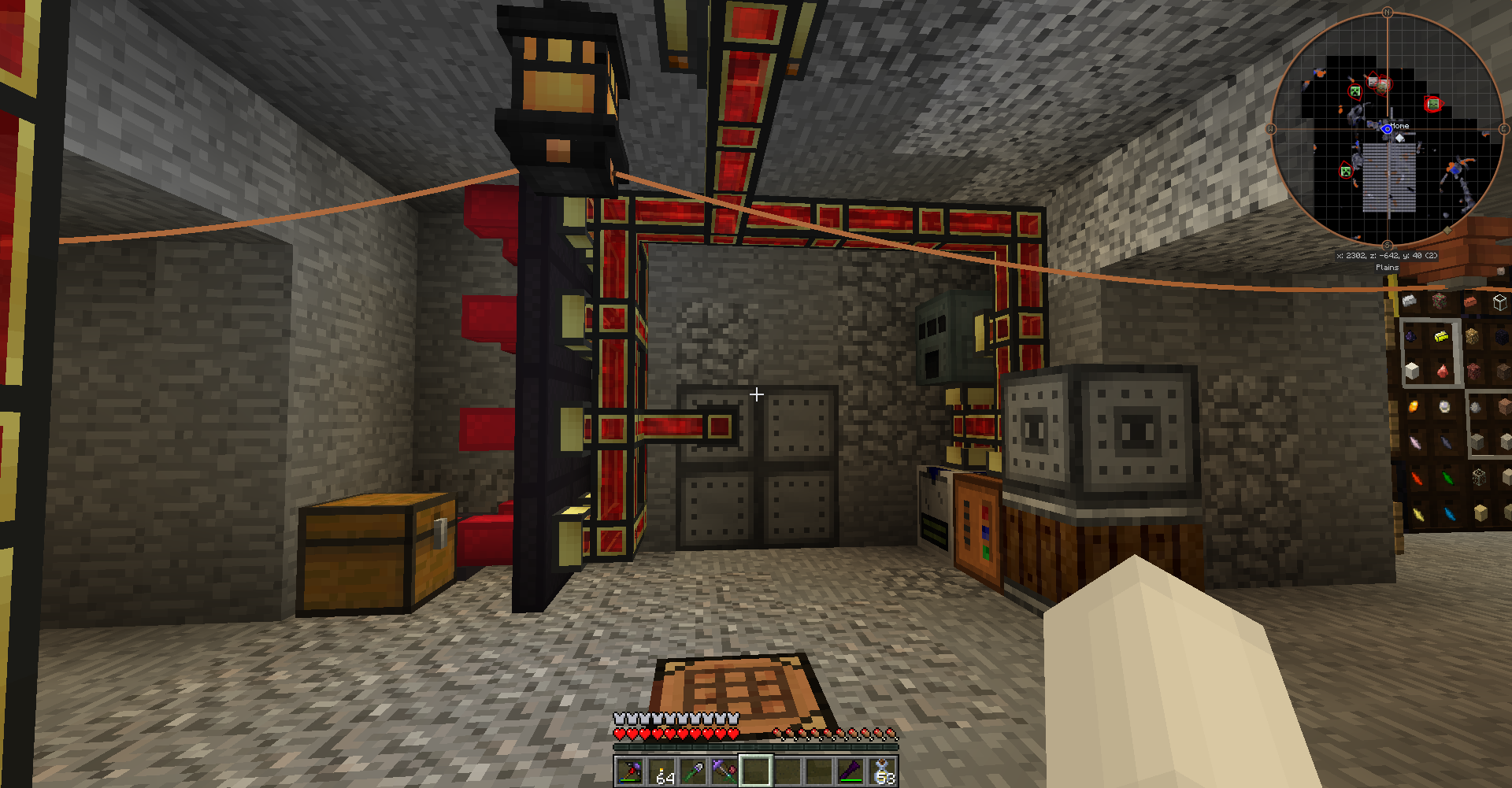 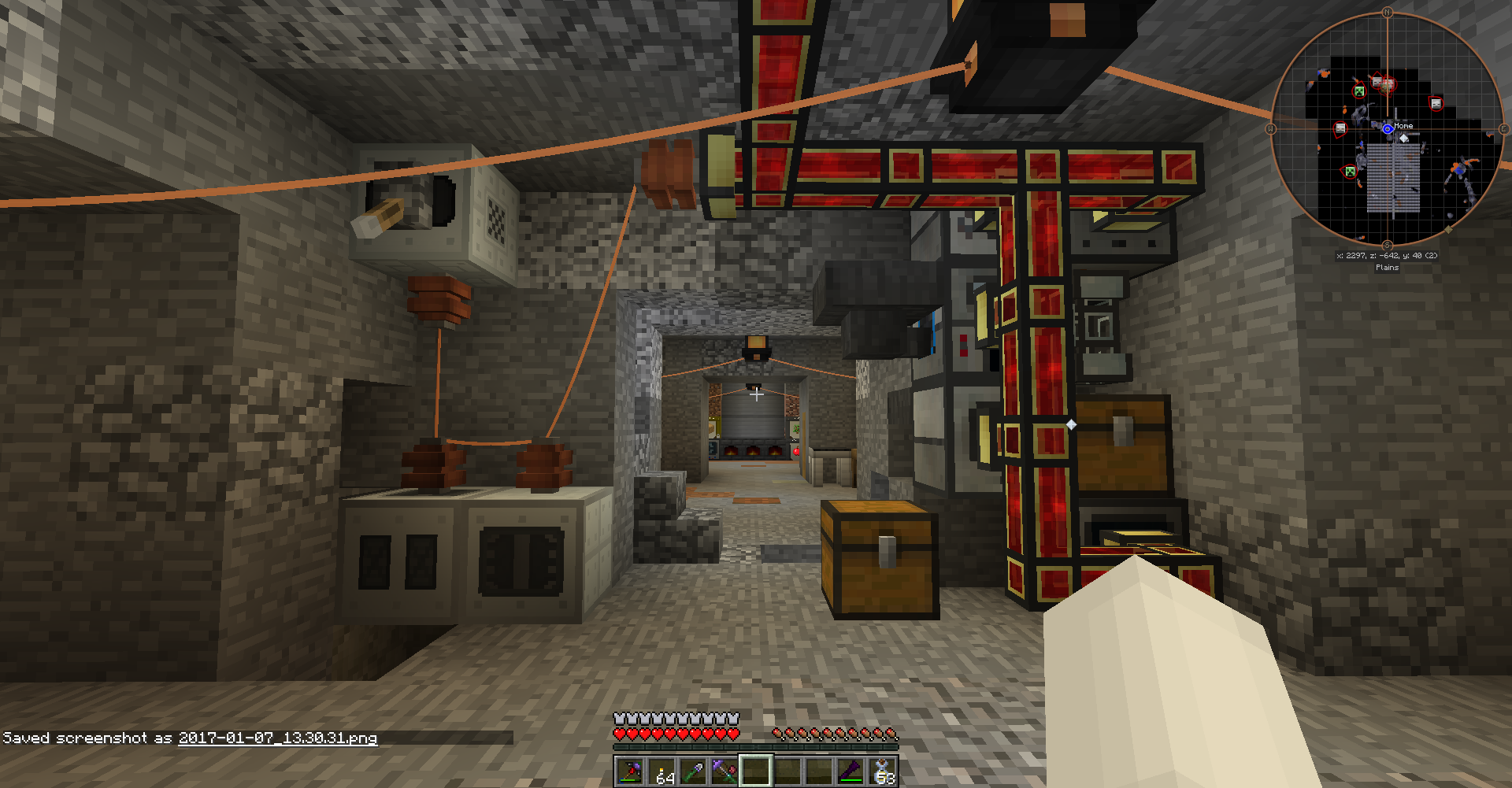 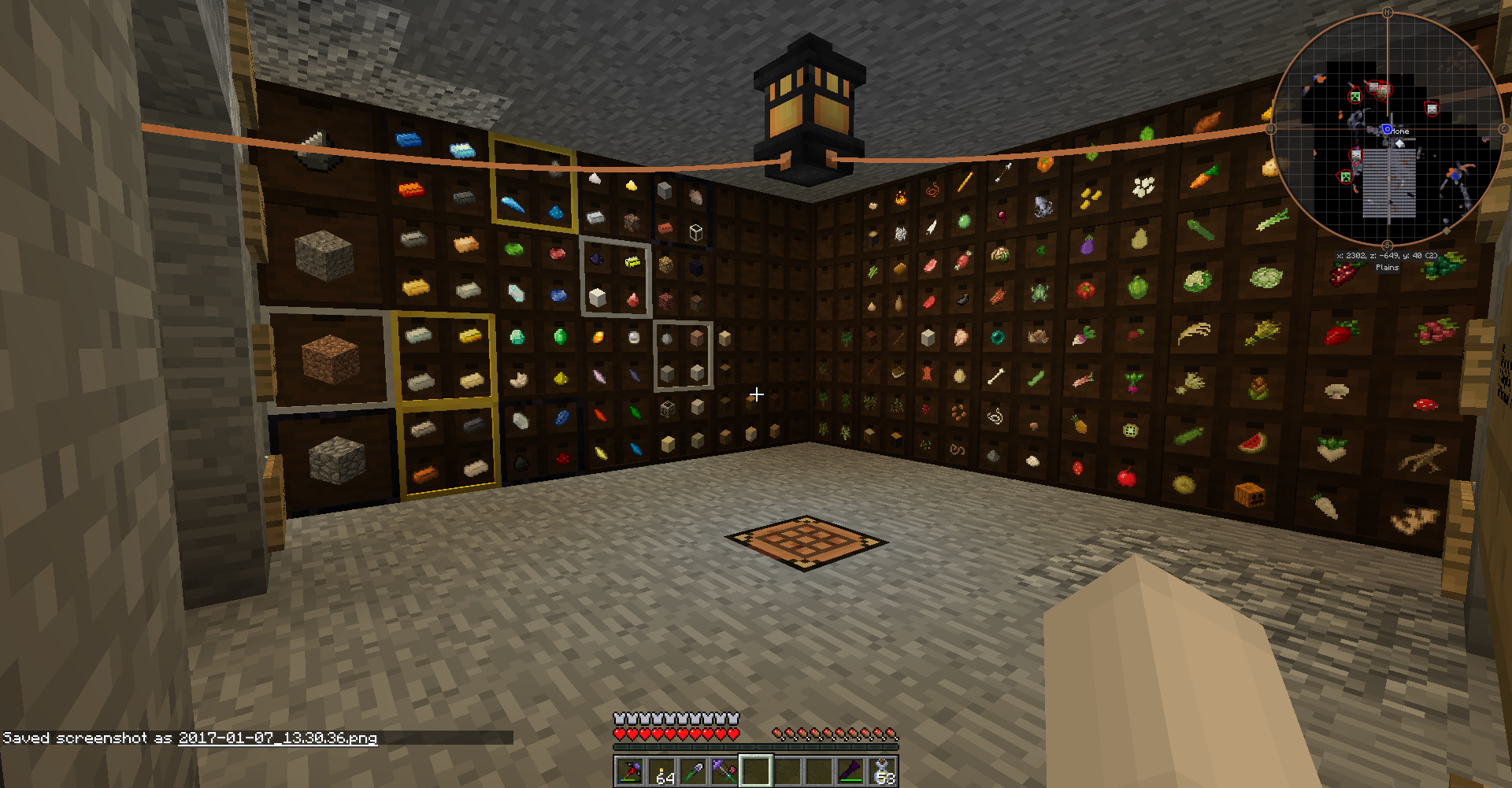 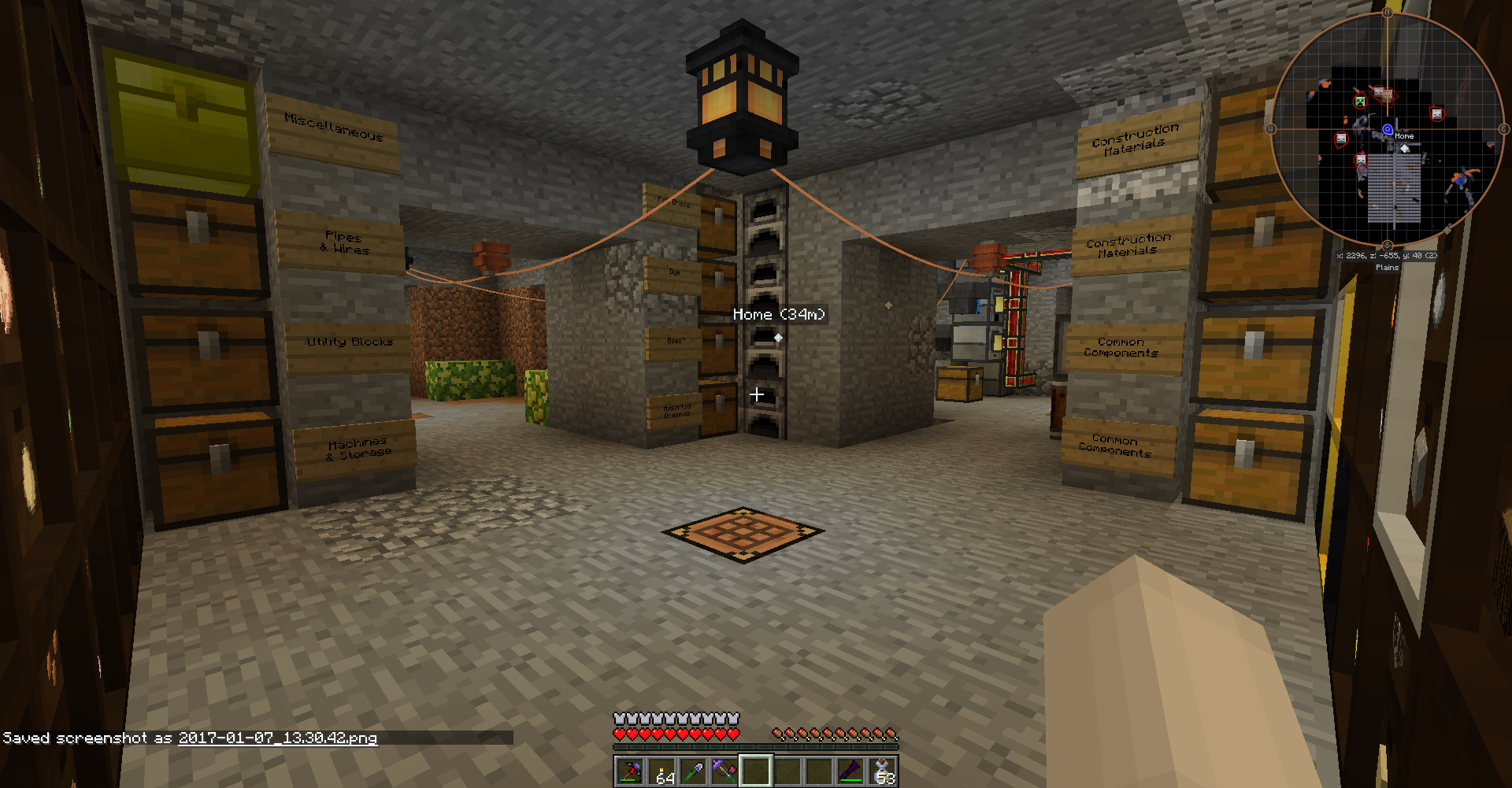 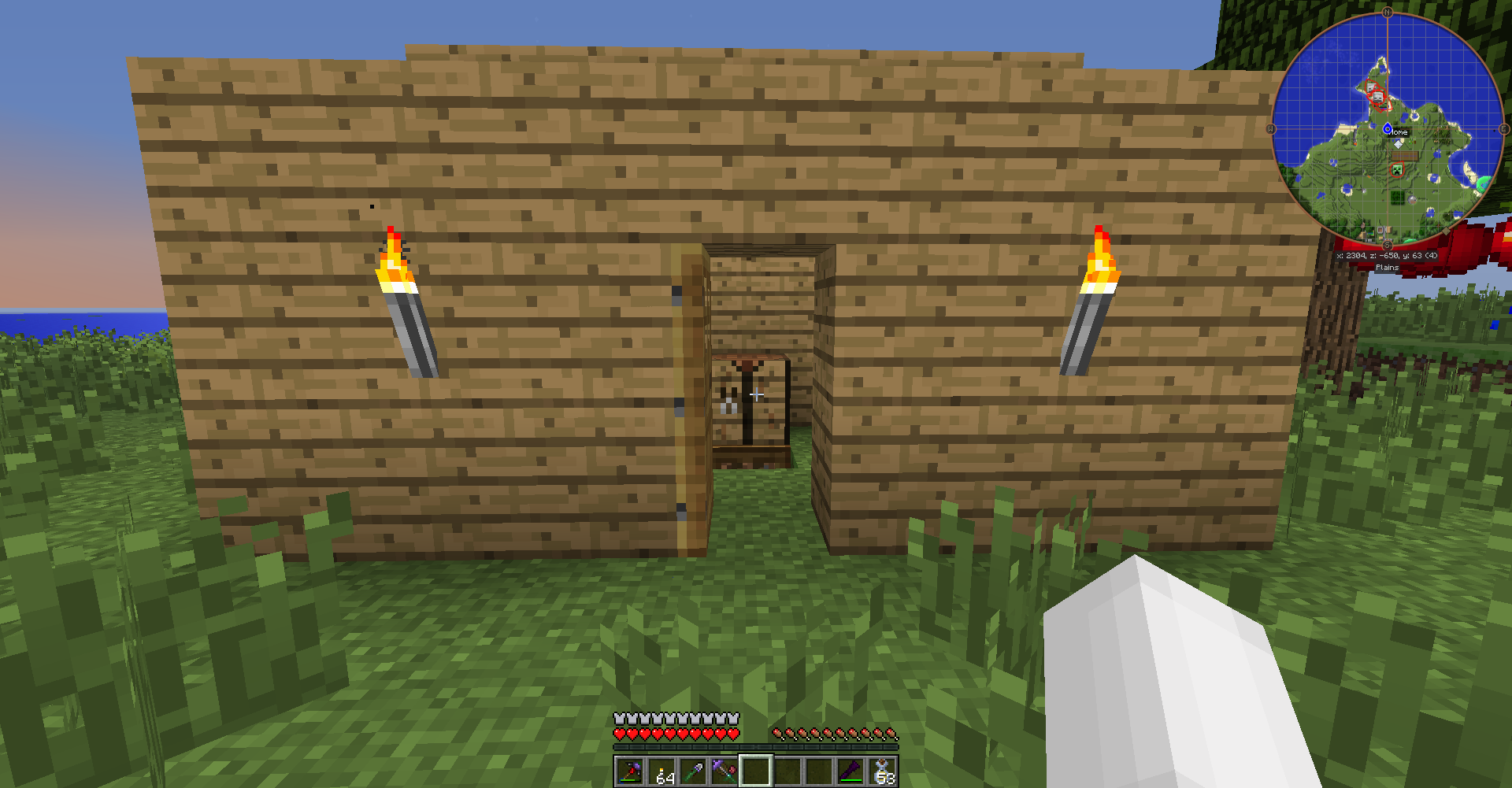 The surface entrance to 9Cell.
The farms: 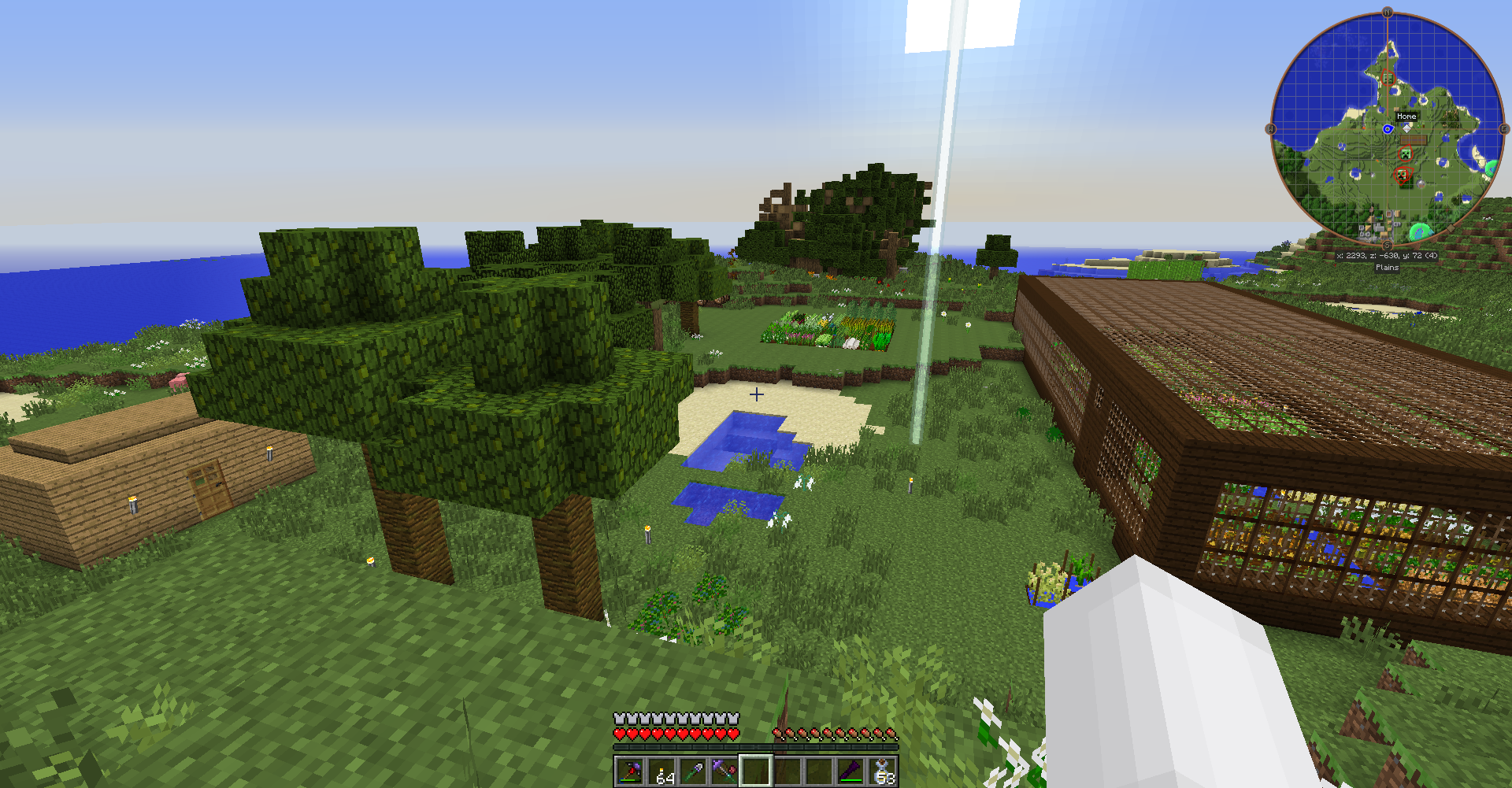 The area above 9Cell is filled with various manual farms, plus the automated tree farm in the background. 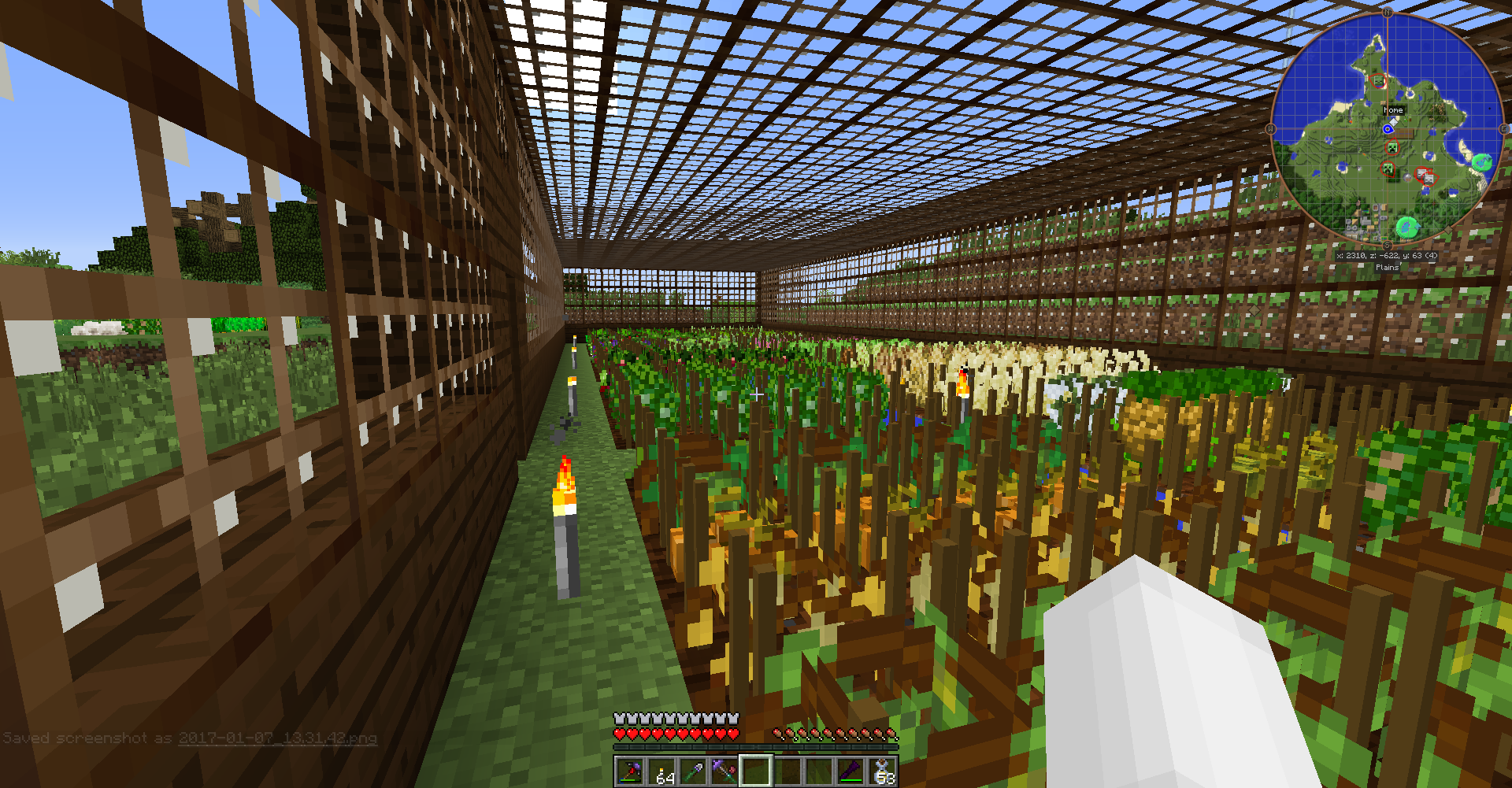 Inside the greenhouse. Most crops are farmed in here. I'm using Agricraft's cropsticks mainly for convenience at this point, and have not yet increased the quality of these seeds. 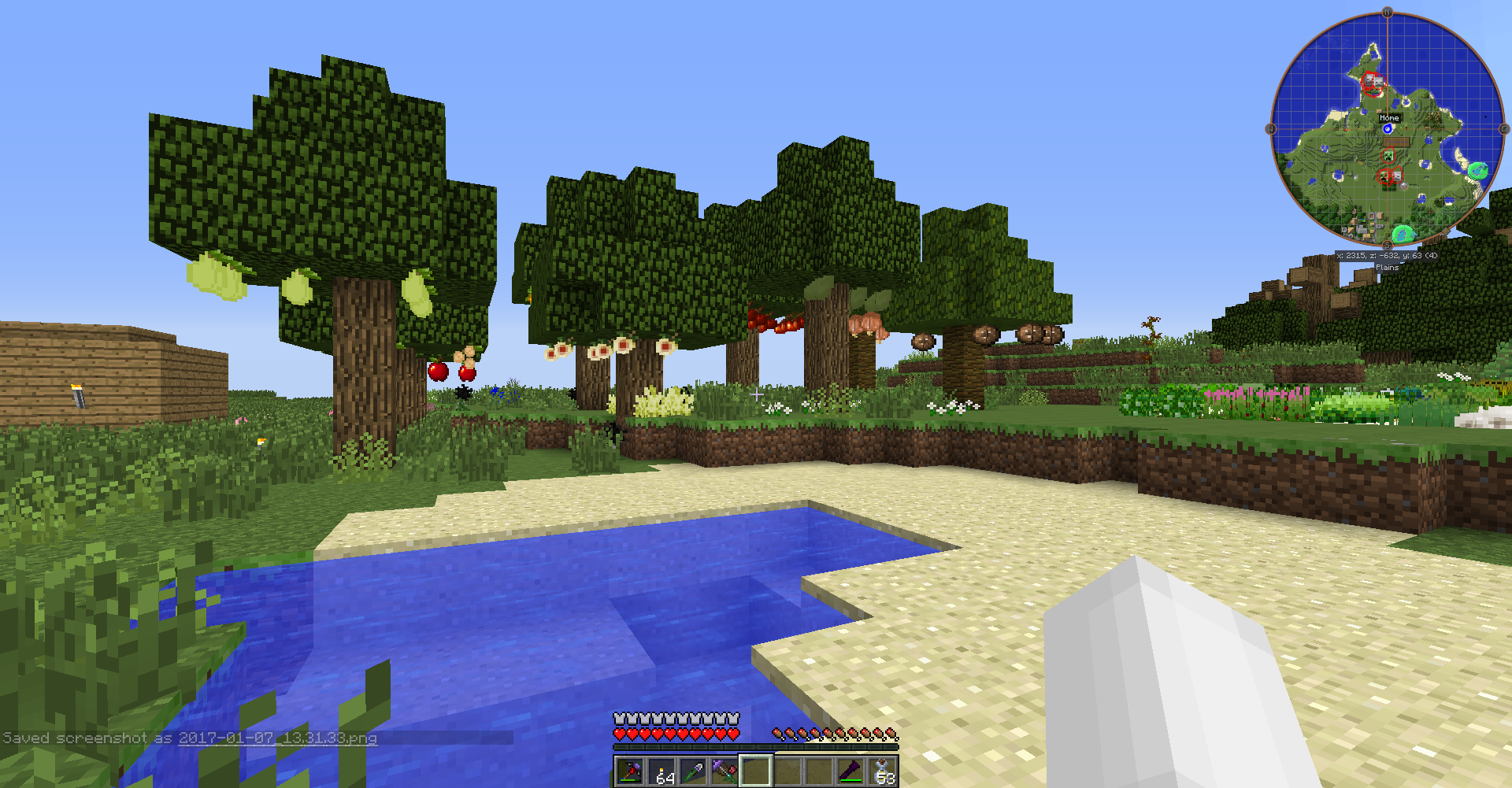 Trees, with as many tree-based crops as I have been able to find so far. 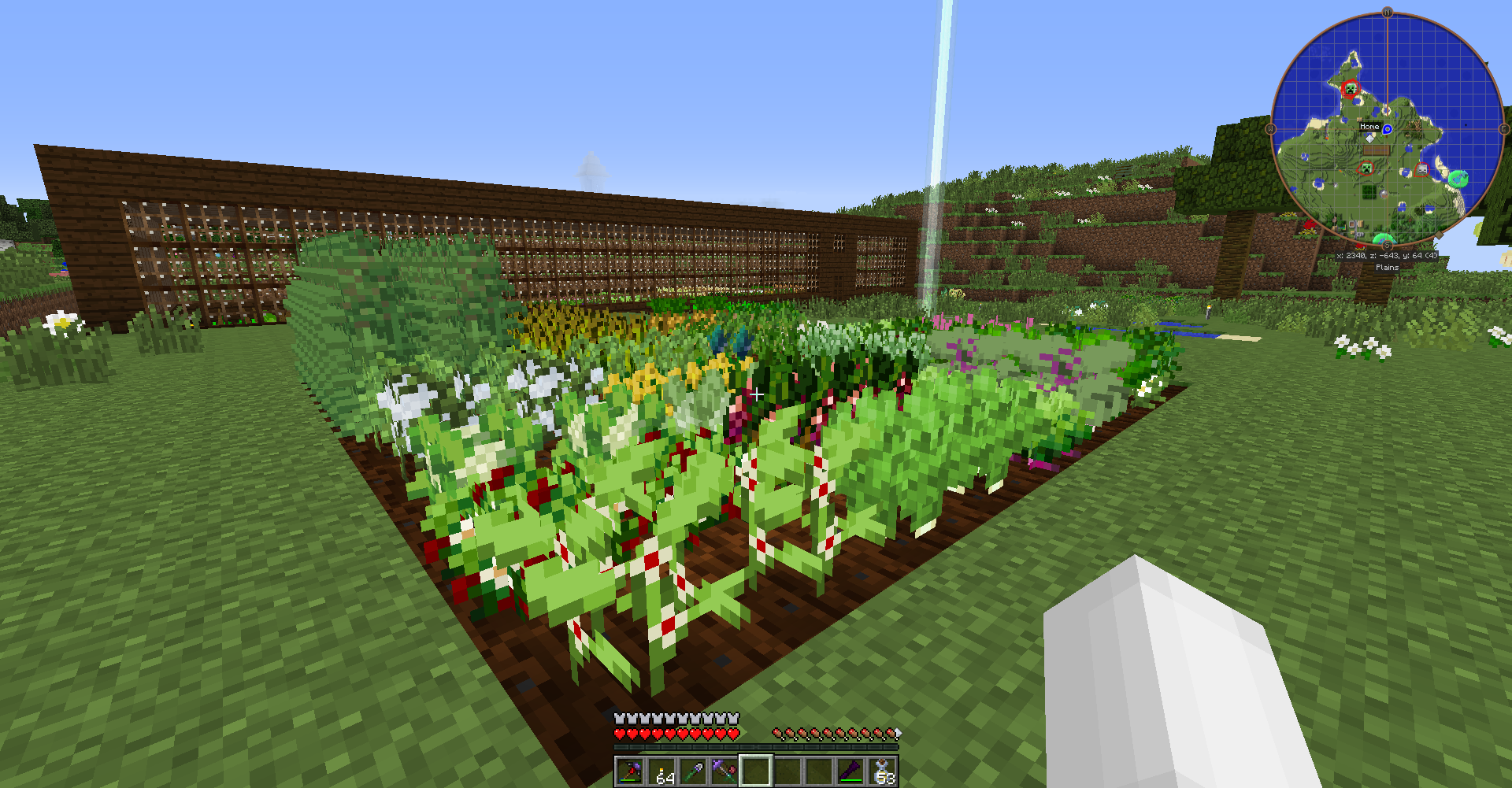 An old farm which I no longer have any use for. 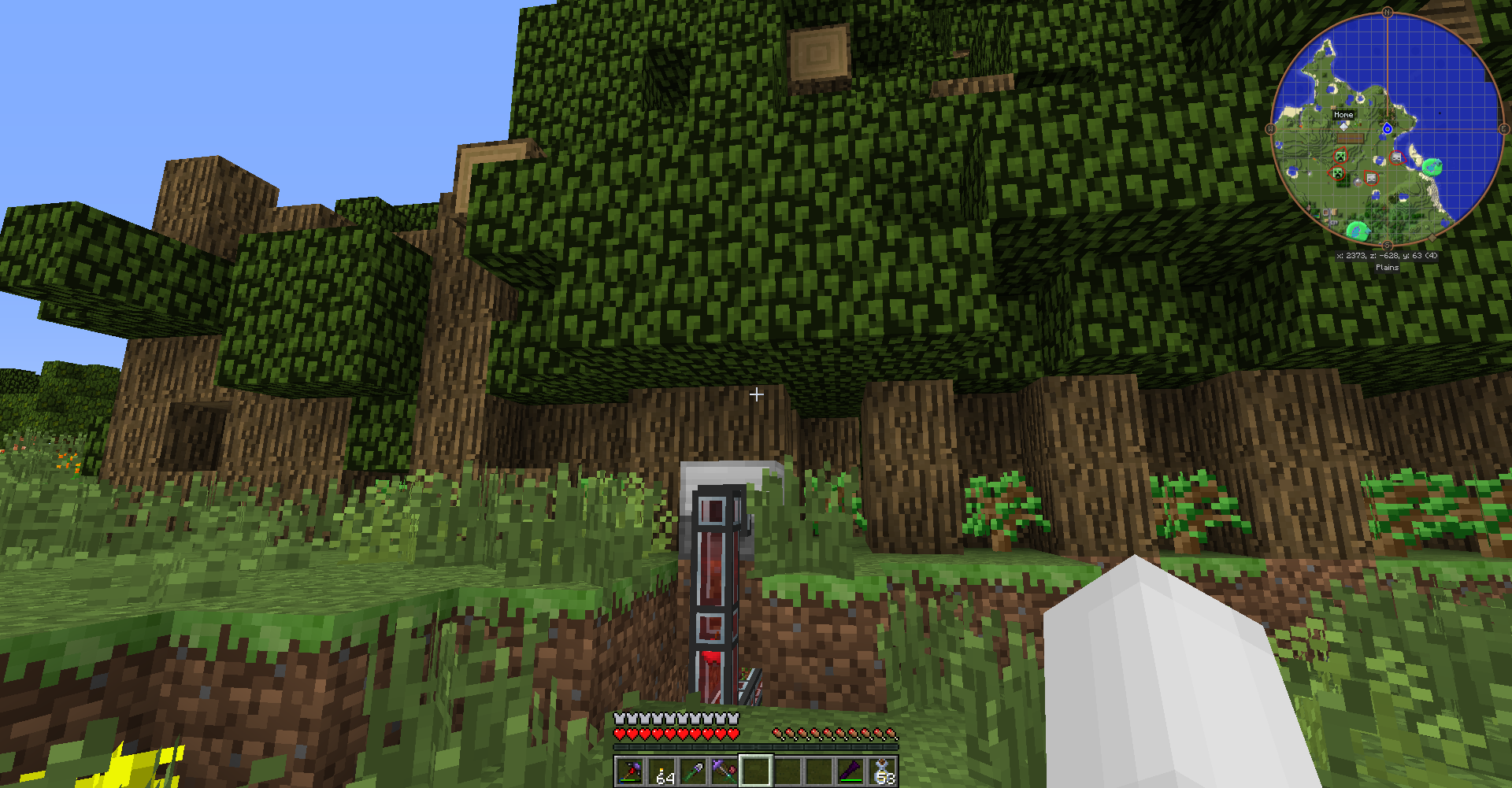 The automated tree farm. There are 4 harvesters working on it. It sustains the steam boiler in 9Cell.
I was also going to include some images of the beginnings of my new base, but apparently there is a limit on the number of images I can fit in a post, and so I have been unable to do that. In any case though, there's not much to see so far. All that has been constructed so far is a simple layout for one of the buildings. I'm building the base on a large-ish island to start with, but it will not be confined to that area. As mentioned in the first post of this thread, I will be making use of an underground rail network to expand across the entire continent.
Reactions: Tenshi, Tianyulong, JaRyCu and 1 other person
M

Lack of ability to ewetoob Thermal related stuff has thwarted my attempts at understanding it. Your clear and -ahem- eloquent visual depictions have sparked my interest.

Guess it's time to try FTB Lite for me.

Muaht said:
Guess it's time to try FTB Lite for me.
Click to expand...

If you like the looks of what I have so far, you'll be amazed by what I plan to accomplish. I basically haven't bothered with aesthetics or particularly complex systems yet; what's been shown already is by no means a good example of what I'm capable in the mid-game and late-game.

Also perhaps I should clarify that this is in 1.7.10 Infinity Evolved. My computer currently isn't powerful enough to run major modpacks in 1.10.2, and an upgrade is currently too expensive.

Additionally, I should point out the fact that there is no specific update schedule, as I don't know when I will have the time and inspiration to play the game. In any case though, this playthrough will definitely last several months at least.
Reactions: JaRyCu
M

I'd facepalm myself, but my doctor ended up surgically attaching my palm to my face to prevent RSI.

@eloquentJane , it's nice to see the early stages of the set up, it makes me take much more interest in mods I'm not familiar with. As opposed to seeing some superfactory and going "there's no way I could build that."
Reactions: Tianyulong, eloquentJane and JaRyCu
E

Muaht said:
As opposed to seeing some superfactory and going "there's no way I could build that."
Click to expand...

The trick with that, I find, is that you have to say to yourself "looks good, I should definitely try to achieve something like that. Now where do I start..." and then extrapolate backwards until you figure out what your earliest setup should be.

Infinity Evolved has a somwhat fixed progression in expert mode, but even for packs which don't, it's a good idea to start out a pack and immediately look through NEI to see what your options are. You'll want to see what choices you have available for different tiers of power generation, ore processing, storage, farming, and other utilities. Then decide which ones look interesting and might work well together. Finally, figure out which ones to do first, and decide on your end-game goal. NEI is great for doing that because it lets you look at resources and see how to obtain them and what they're used for, which is extremely helpful for planning and deciding what's going to be an efficient setup or a complicated setup to design and create, and what's going to be quickest to make in the early game.

Whenever I start out playing a modpack, the first thing I do is start a creative world. I'll look through NEI at all of the ores, and see where they're found (if the NEI extension which shows ore vein spawn heights is installed) what resources they produce, and how to process them to produce additional resources. This gives me an idea of what processing equipment I'll need at various points in the game, and potential paths to progress to higher tiers (e.g. furnace ==> smeltery ==> pulverizers). Then I'll look through all of the metals (and ore byproducts) to see what they are used for. This gives me an idea of how much of certain things I'm likely to need for certain methods of progression, and so allows me to refine my ideas of what processing methods to use. For example, the IC2 process doesn't produce nickel as an iron byproduct, but there is a separate ore that can produce nickel; if a lot of nickel is needed then a pulverizer setup is used, if not then an IC2 setup is probably used - however, the thermal centrifuge does require diamonds, which makes the full IC2 chain more expensive, and there are also fewer power options for Industrialcraft (unless you're using Immersive Engineering cables to convert). In the end, what method is chosen depends on a chain of decisions which ultimately influence what your late-game design will be. The same goes for item transport (itemducts vs conduits vs conveyors vs pipes), farming (MFR vs Ender IO) and any other systems which you might want. The ability to plan like this comes from experience, but much of that experience is gathered just by looking through NEI and deciding what's going to be the best way of doing a certain thing.

As for appearance, that's influenced by the technology you're using, the aesthetic mods you have installed, and also your own experience in designing things. It helps to start out simple, both for aesthetics and for engineering. Start with stuff like my current setup, which has very limited automation and has little thought put into block choices but has some considerations with regards to layout. Then move forwards. Before I leave 9Cell I'm probably going to work on replacing the floor, ceiling, and walls with various bricks (no wood because that's a fire hazard) just to make it look a bit less awful. In terms of technology layout, I'm not going to be doing anything complex until I move to the new base, but I've already started planning for that. The first thing I'll need there is pipes and energy conduits, so I'll set up automation for those. In terms of construction, it's mostly going to be made of stone bricks, which is the main reason why I made such a complex system for generating cobblestone products. But I've also been collecting iron, marble, limestone, quarried stone, glowstone, and some other resources that I'll need. I haven't decided on a specific aesthetic for the whole base yet, and I might not end up using all of the resources I've collected for it, but the point is that I got an idea for it, looked at my options, and considered what might be a good way to achieve what I want.

This sort of planning is kind of time consuming, so I usually do it whilst mining, collecting resources, testing out potential processing systems in a creative world (hence why I make the creative world in the first place), or doing something else time consuming and/or repetitive.
Reactions: JaRyCu
E

I'm making this post primarily to use as a personal reference while I'm assembling the new base, but it should also help to make my ideas clearer to readers of this thread.

New Base Room Plans
Key
Surface
Subsurface
The base currently looks like this: 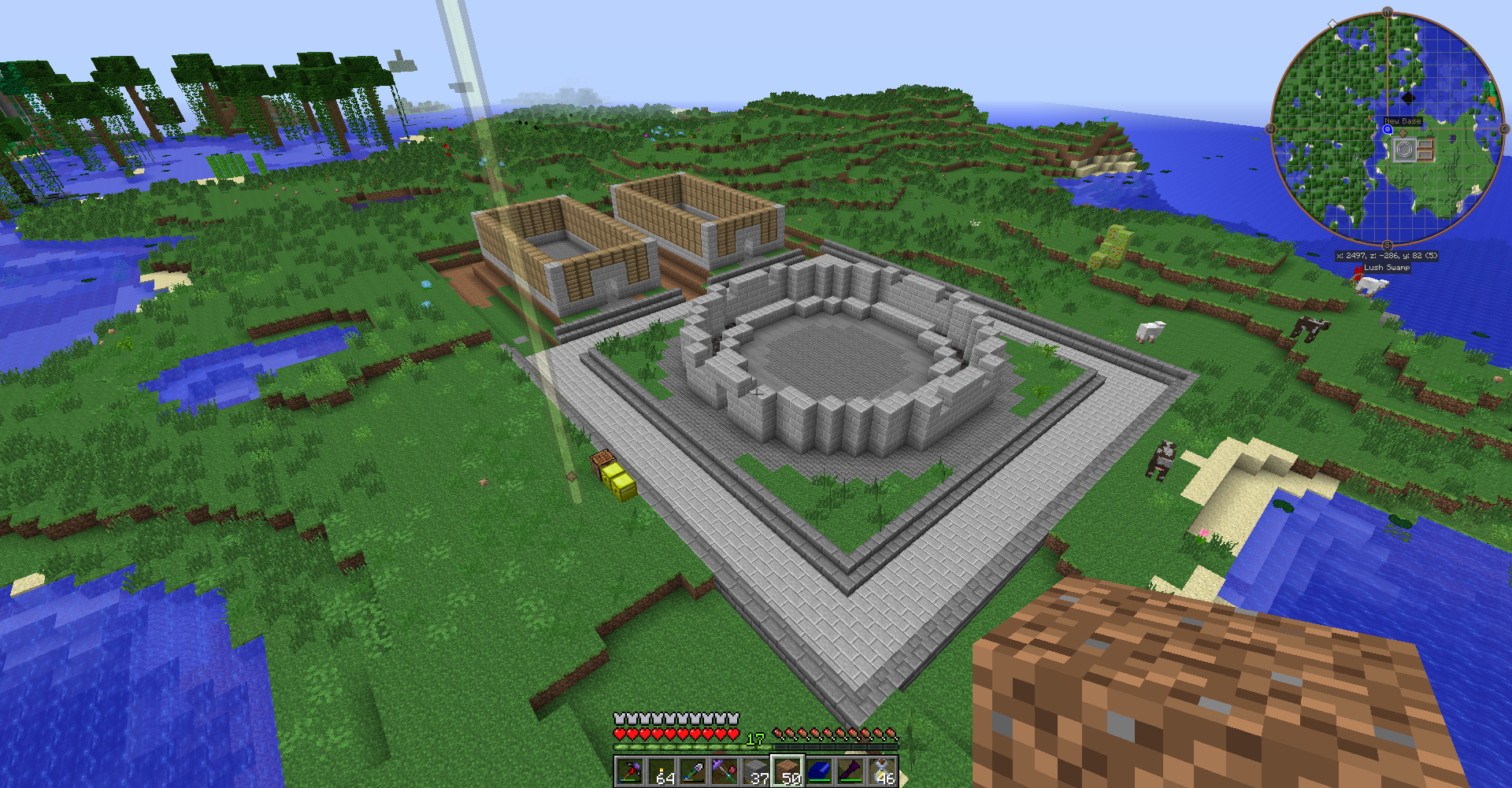 The circular building is for producing circuits, processors, capacitors, and assembly table products. The two other buildings are some of the storage warehouses that this base will have. I'm not yet certain whether I will keep those warehouse designs or rebuild them, but I am leaning toward the latter.