49. And that's the weekend all done twas quite a nice one though.

49. Welp; my brother's wife has tested positive for COVID-19, and him and one of his sons have both been unwell. It sounds like they're at the tail end of it now thankfully.
N

51 at least they're at the tail end

It also has been a while since I last posted here. So, have something I wrote while bored

I stretched myself after having woken up, while thinking out lout "Its market day today, so it shouldn't be that hard to steal some food. Just need to make sure I'm not recognized. Or I can just search through trash again". I thought for a moment while grabbing my cloak "Actually, Now that my right horn is broken anyway I should be a little bit less suspicious for as long as they don't see my face. So, all I have to do is look downwards. Sounds easy enough." I put the cloak on as well as it hood and got out of my hiding/sleeping spot to make my way to the market.

The market was busy as usual, and going by the smells there was plenty of good food. The people also seemed to care more about buying stuff than about a "filthy warmblood" like me walking around without a master. Though I knew I still would have to be quick, it can't take long before I run into someone who wants to beat me up because of it.

It didn't take long before I found a good target. The guy was selling meat, with some sausages that where ready to eat in front of the stall. Even better, an alleyway was close by that for the guards would be a dead end but its easy enough for me to climb the wall.

So, I took one last deep breath, walked up to the stall, grabbed the biggest one I could see while the stall owner was distracted with a customer and made a run for it. I slipped between two stalls and removed my cloak as it would be easy enough to get a new one and it would just get in the way. Some people where still following me, so I ran towards the dead end, grabbed the food with my tail to have my hands free and ran as fast as I could towards the alleyway and more importantly, the dead end.

Once I was close to the wall I jumped and used my wings to get just that extra bit of height and speed needed to make the rest of the climb. Some of my chaser tried to climb the wall as well, but they where neither nimble enough nor could get high enough to get to the easy bit as they lacked wings. So, from this point it was easy. One more climb to get on the roof tops, get myself out of sight and get down somewhere where its safe.

After I reached the rooftops I looked at where people where going, discovered that they pretty much all seemed to have given up the chase and only some stubborn guards remained. I simply wend the opposite way of them, made sure they couldn't see me for a bit and let myself safely fall down. Then made sure to get away from this alley and find a place to finally eat my breakfast.

After having walked for a bit I suddenly heard something behind me, I looked back and saw that somehow a thug sneaked up on me. I dashed away but the guy was already swinging his metal bar at me and there was no avoiding it. His strike landed on my leg, and I let out a cry of pain as I lost Ballance and fell to the ground. "I have to get away! RUN!" Was the only thing I could think about as I tried to get back up and sprint away. My leg was killing me but no time to worry about that. I have to go! NOW!

Sadly the distance between us two was just too small and the guy easily caught up to me, grabbed me and threw me once again to the ground, followed by another strike at my leg, the sound of bone breaking and once me screaming from pain. Before I even had a chance to recover the guy put grabbed my throat and choked me. I desperately tried everything I could to get out of his grip before I lost conscious but he was just simply too strong and his scales too thick for me to have any hope of injuring him and all I could do was mutter one final "please" before everything turned black

When I regained my consiousness I was sitting upright against a wall in a dark room. The pain of my broken leg was imense, no way that it was anything other than dead weight at this point. There was also a sicknening pain coming from my wings, obviously because of the holes that got cut into them for the shackles that bound them to this stupid wall. That thug must have handed me in, which meant that I would only have a few more days before I will get executed, at least if I am lucky. Either that or that asshole captured me for himself. A cold shiver shiver ran through my spine just thinking about what that would mean.

After what felt like a century of waiting and trying to ignore the pain someone entered the room. "Slept well?" This new guy said mockingly "Here, have some water and bread. You'll be stuck here for a while" he said as he put it next to me. "Not hungry" I replied "Where am AAARGH!" I once again let out a scream of pain when the guy kicked my broken leg

"Eat or I will kick again until you do. And next time I will actually put strength into it." He said while I was still getting myself together af the sudden surge of pain. "OK! I'll eat!" I said and quickly reached to the bread after seeing that he was about to kick again. The guy seemed pleased as I started to nibble the old, stale bread "You enjoy my pain, don't you?" I asked in between bites

The guy angrily put his hand around my troat and started to choke me "Your species is supposed to serve US and yet you both ignored it and actually STOLE from US instead." then let go of my throat and continued with a smile while I was gasping for air "Yes, seeing that you finally get what you deserve pleases me."

"Now, are you going to finally eat or do I need to kick you again?" He asked once again getting anoyed "ok" I said with a crack in my voice and continued to eat the vile bread and drink the disgusting water. Once I was done he grabbed the cup and left me once again alone with my pain and thoughts 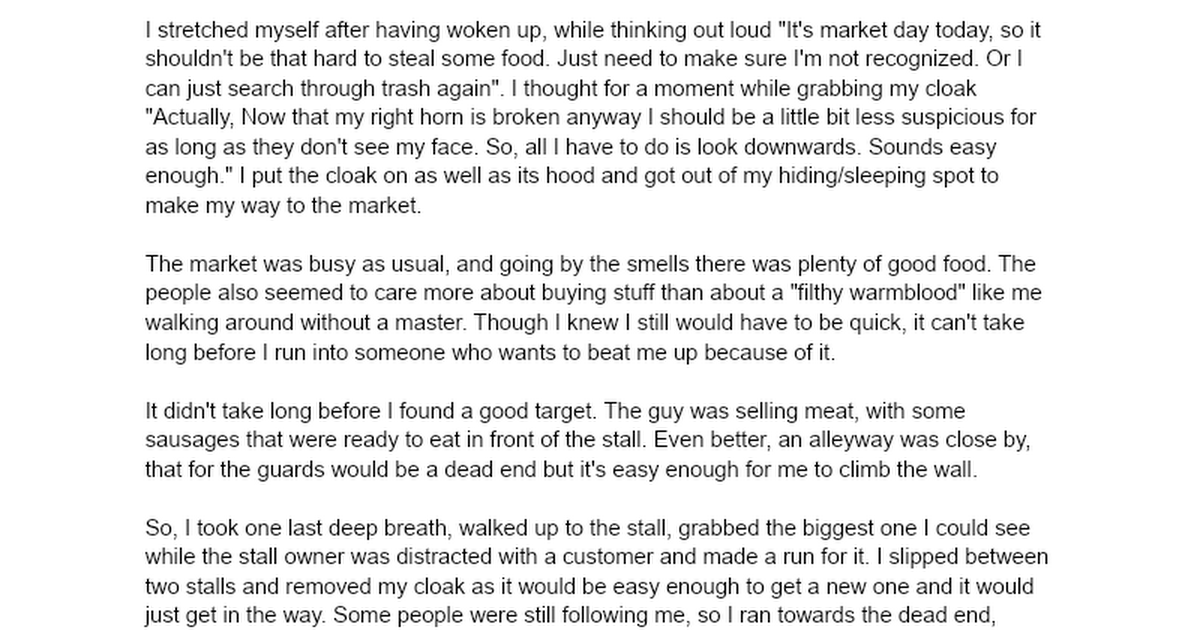 I stretched myself after having woken up, while thinking out loud "It's market day today, so it shouldn't be that hard to steal some food. Just need to make sure I'm not recognized. Or I can just search through trash again". I thought for a moment while grabbing my cloak "Actually, Now that my ri...

55 I promise I am planning a happy end for the main character.

56 oops... didn't get to sleep until somewhere around 7am
R

59 Essentially the last day of classes ^_^