Blog of a lonely developer

I looked at ActualAdditons code, where its Experience Solidifier is coded. There is a comment that says its experience conversion functions were excerpted from EnderIO. Interesting, because I already knew that those EnderIO's functions were taken from OpenBlocks. So I went and looked at OpenBlocks code, found those functions and adapted them for my experience storage. Now it works properly, and there are at least 3 mods now that took expereince calculation functions from OpenBlocks. Credit goes to its makers; this is open source power in action!
Reactions: Celestialphoenix, ICountFrom0 and GamerwithnoGame

Alexiy, peeps might appreciate links to or snippets of your code. There's a lot of lonely noob developers here who could learn your mistakes with you
Reactions: Celestialphoenix

Pyure said:
Alexiy, peeps might appreciate links to or snippets of your code. There's a lot of lonely noob developers here who could learn your mistakes with you
Click to expand...

Ok, some snippets wouldn't hurt me, I guess. If I come up with a nifty feature or encounter some interesting problems, I'll be sure to show it.
Today, I'm willing to share a piece of code for beginners which might save them some trouble when working with Containers. Yes, those classes that are responsible for handling UIs with item slots - if you are making a UI with item slots, you will be making a corresponding Container subclass as well. We know that many UIs have a convenient Shift+clicking feature, which puts items into right slots automatically. This behavior is defined in Container#transferStackInSlot function, which by default crashes or hangs the game. Thus it must be correctly overridden. So I made a subclass "Container2" which has the following override:

Code:
I can't explain exact logic in this, because I coded it a long time ago, but in short whenever a player Shift+clicks, nothing happens. Thus you can create subclasses of this crash-safe container and implement Shift+clicking later. I've never worried about a user Shift+clicking and getting a crash since then.
Reactions: ICountFrom0

Thanks dude. Ya know one reason why toddlers pick up language so well? Because they have zero concerns about looking dumb. Don't be afraid to post your BAD code too so we can all learn from it together
Reactions: ICountFrom0 and lenscas

Another "lesson" for beginners/intermediates. Have you ever wanted to detect whether an entity is within player's view? I have, so I dug enderman's code where he detects when a player is looking at him. Its logic is scattered across the class, so I had to gather only relevant code and compile it into a custom AI task. One has to deal with vector math here, as it is needed to calculate a dot product of two vectors: a vector where the player is looking at and a vector which points from player's coordinates to target entity's coordinates. I'm not good at vector math, but eventually I figured out a general function for creatures:

Code:
The dot product of those normalized vectors reaches almost 1.0 when a player is looking directly at the entity, and is ~0.0 when player's view is 90 degrees away from the entity. If dot product is in range 0.6-1.0, then the entity is approximately in player's view (that can depend on game window width, though). Realistically, a player can not see wider than 180 degrees, so 0.0 is reasonable minimum bound. Here I also utilize built-in EntityLivingBase#canEntityBeSeen function, which just checks whether there is a block between playe's "eyes" and target. It should be placed after dot product calculation though, because it's supposedly more expensive.
Reactions: Pyure

Finally I found a need in item disenchantment utility; I don't like unreliable randomness of librarian trades, while trades of certain professions (Toolsmith, Armorer) can give enchanted stuff, but I often find the items not worthy. I briefly searched for an item disenchantment mod, and found one, but I didn't like its complex mechanics. I'm sure that there are disenchantment blocks in other big mods, but I can't afford to install them on my server with limited resources. So I made a simple disenchanter, which does its thing in exchange for energy and is fully automatable. I'm not sure what the energy cost formula should be though. Currently it just includes multiplication of enchantment's level and rarity, but I suppose it wouldn't be balanced. Just expressing my thoughts; though if someone else has thoughts on this, do reply.

I would take a look at the mechanics of the twilight forest disenchantment table, and possibly talk to the dev of this mod: https://www.minecraftforum.net/foru...aft-mods/2771389-jglrxavpoks-uncrafting-table

They had managed to make a blacklist/whitelist mechanic work really well, to be very configurable.

If you then produce a version that can be automated with taking exp and power to do things automatically, that would be amazing.
Reactions: Alexiy

A neat trick when you are making a tile entity with multiple item handlers: suppose we have a tile entity with 4 slots - 2 for inputting items and 2 for outputting items. In this case we would have to create 3 item handlers - one that handles insertion, another that handles extraction, another for use in associated Container. But using anonymous classes we can declare input and output handlers inside the tile entity:

Code:
The anonymous inserter and extractor just delegate the actions to general handler, if requested slots are 0 or 1 (notice the "slot+2" expression in the extractor). This way we don't have to create a separate class for each handler, which saves some time and space, and we don't need to save them to NBT.

A lot of time passed since I wrote here, and that is mainly because I joined a modding group which develops a new mod. I've learned a lot while being the main coder there, and recently I happened to play the popular game "Plague Inc". I quite liked its concept and I thought of doing something like that in a mod. Like creating diseases which can develop, spread and affect objects in various ways. I'm planning to make this mod open source. If anyone is interested in joining such project, then let me know. If you wonder about how skilled I am, then take a look at my main mods here - https://minecraft.curseforge.com/members/Alexiy/projects.
The starting conditions are following so far:

Well, the mod turns to be more like about diseases AND conditions. So far I've implemented common cold, heat stroke, blood loss, dizziness, leg bone fracture, vision impairment and head concussion. Common cold naturally weakens the player and makes him sneeze or cough; heat stroke gradually weakens him and ultimately kills; blood loss is supposed to start when player suffers a physical damage, and decreases health over time until death; leg bone fracture can happen when player falls - it makes player slow (I also wanted to make it disable jumping, but couldn't find a way); vision loss can happen when a block falls down on player - results in blurry vision; head concussion occurs from explosions - results in motion blur; I enjoyed implementing dizziness - it randomly moves player's field of view, and should happen from various causes, currently - blood loss.
Now planning to do food poisoning.

Been a while since I posted here. No one expressed a desire to join my project about diseases. I thought about it and decided to change its theme - it will be just a mod which makes game harder. Currently I've implemented 3 things:
How impaired vision looks like - 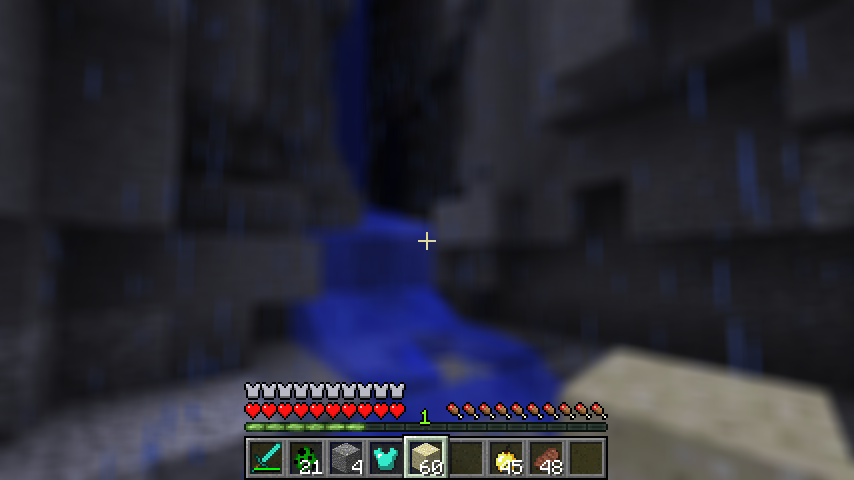 I would be happy to receive feedback on this one mod, particularly what features could be added, since hard mods have become popular lately.
Reactions: ICountFrom0 and Pyure

A peek of another thing i'm doing: 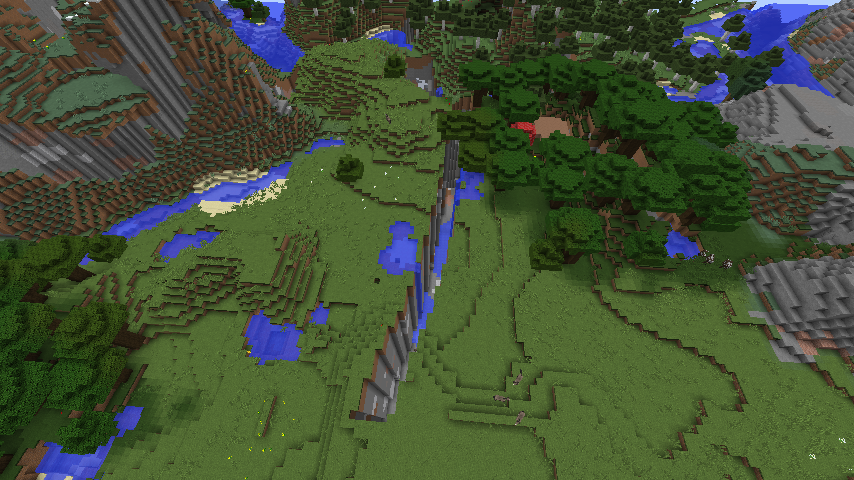 New ravines. I have to write code for them from scratch, because vanilla ravines are restrictive on what you can do with them and the code is hard to understand. Though this way I can make them extensively customizable: 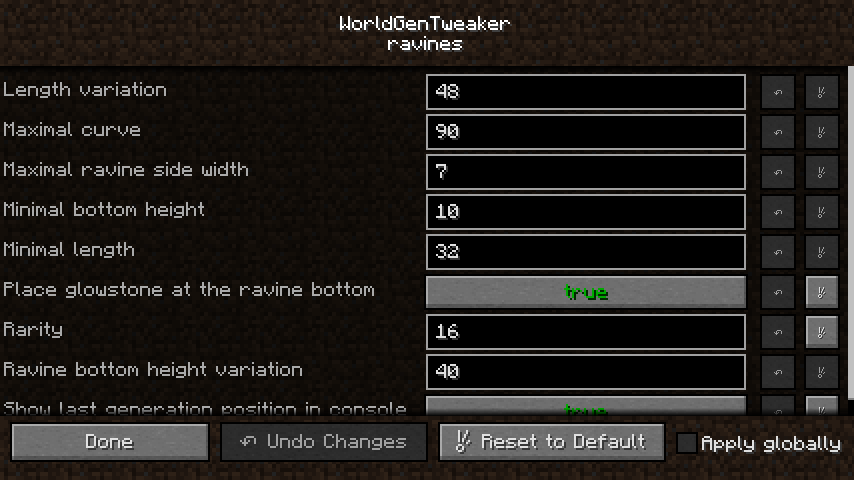 And I managed to make them curve: 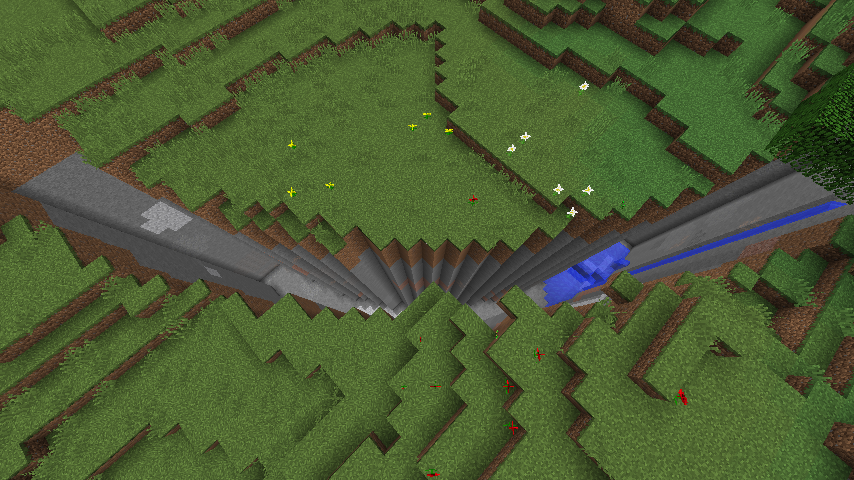 If you can get lava sourceblocks to generate if the ravine isn't in a water biome, and magma blocks if it is, as options in additon to a scattering of glowstone...? Just tossing out ideas.

ICountFrom0 said:
If you can get lava sourceblocks to generate if the ravine isn't in a water biome, and magma blocks if it is, as options in additon to a scattering of glowstone...? Just tossing out ideas.
Click to expand...

Are you asking whether I can make ravine filled with lava if it is not in a water biome and filled with magma if it is?
Glowstone is just for debugging - it shows the path along which ravine was generated.
I am ready to deliver a first version of this, but where to should I upload the files?
Reactions: ICountFrom0

I couldn't resist generate ravine filled with this: 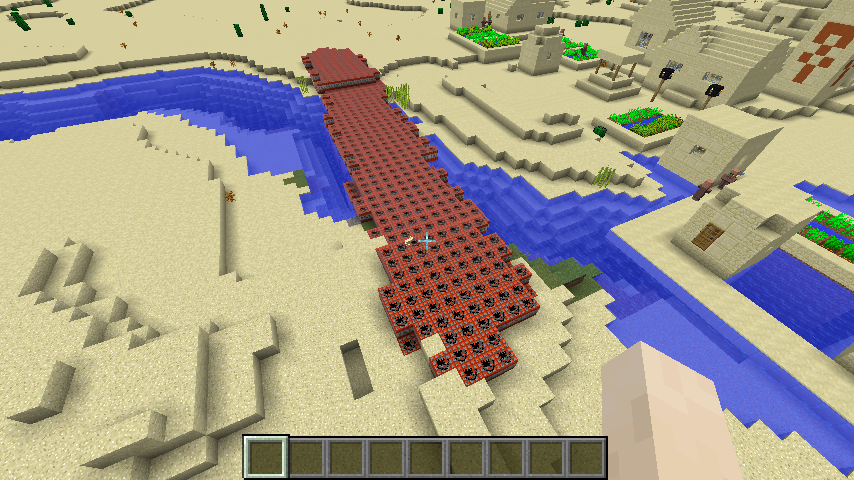 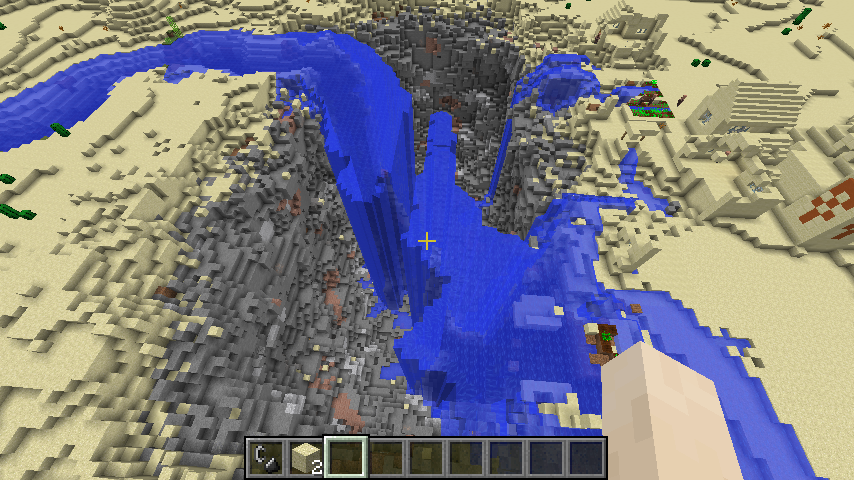 Alexiy said:
Are you asking whether I can make ravine filled with lava if it is not in a water biome and filled with magma if it is?
Glowstone is just for debugging - it shows the path along which ravine was generated.
I am ready to deliver a first version of this, but where to should I upload the files?
Click to expand...

Well, less "filled" and more "cover the bottom to a random depth"

I love the TNT version though, that's very cool.

Looks like several of your examples have square ends, whereas vanilla ones often have pointed ends. Is that something you've accounted for? Square ends just don't look natural (yes, I realize how ironic that sounds given the game at hand).

It might also be cool if you could manage to modify ravines' behavior when they intersect with a patch of trees (as in the above image). Perhaps when a tree would have generated on top of the ravine, it instead builds a fallen-tree bridge? Might require you building a couple of standard trees per type so it has some to pick from for generation. And maybe that would have to be limited within so many blocks so you don't have a spot with basically solid fallen trees reaching across the ravine.

Rounded ends have been implemented since then.
My ravines generate after everything else, and I tried to prevent cases when something gets left floating above them, but solution isn't perfect yet. I also had to handle a case when a ravine generates over a mineshaft, deleting its floor because it's made of stone; the generator detects mineshaft fences and places polished andesite under them. Not perfect yet, too: 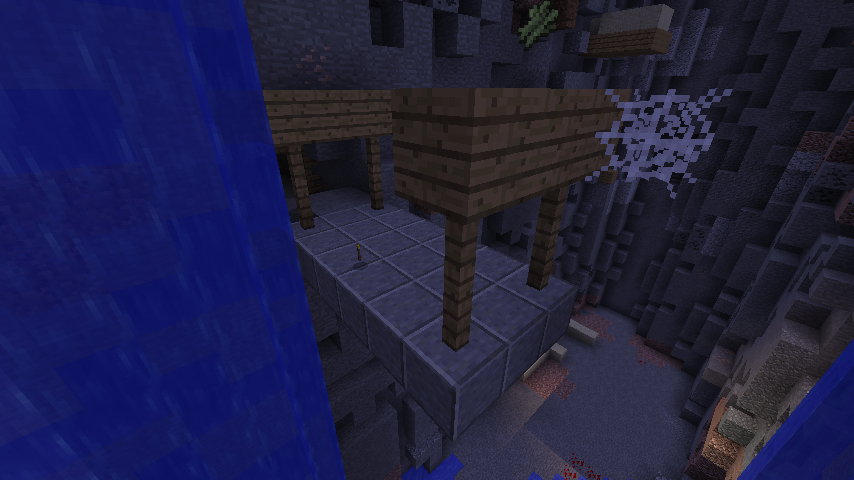 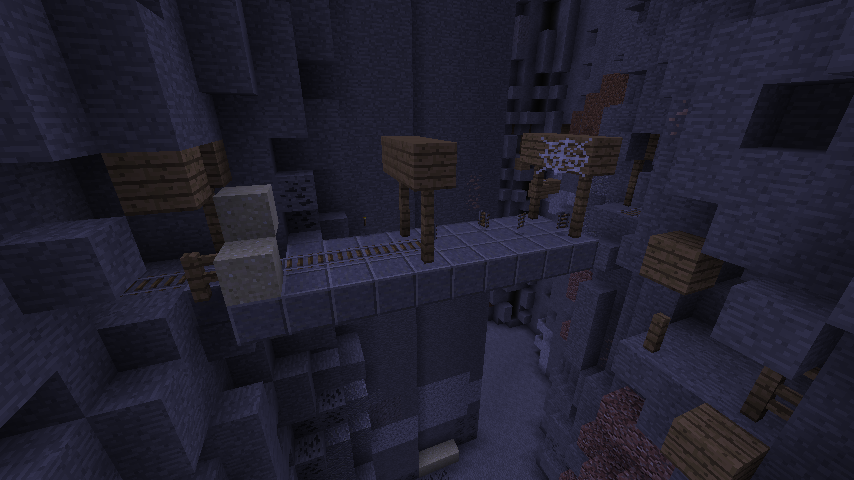 Intersting, so people can tell a ravine you made, from one vanilla made, by yours being andersite, and vanilla using wood when such things happen. Good way to tell things apart for testing.
You must log in or register to reply here.
Share:
Facebook Twitter Reddit Pinterest Tumblr WhatsApp Email Link
Top Bottom