DISCLAIMER: if you are religiously sensitive, don't play here. There's gonna be violence, death and a crapload of sinning. You have been warned.

EDIT2: FOR NOW, I AM ONLY ACCEPTING ANGELS! IF YOU WANT TO BE A HELLSPAWN, THEN TOUGH LUCK!

The universe is in turmoil. A war is happening. But it is no ordinary human war.

There are three planes of reality.

Heaven, the place of eternal peace and bliss.

The Overworld, the universe we humans live in.

Hades, known to denizens of the Overworld as Hell, the place of eternal torment and chaos.

On the 1st of January, 2020, The Lord of Hades, the Devil himself, waged war on the Heaven plane. Against God's will, the archangel St Michael decided to send his forces out to combat the malevolent forces. The prize for winning? Control of the Garden of Eden, the origin of man. It looks like the angels have the upper hand at the moment, but the Satanic Council (made up of the seven princes of Hades who kind of look like http://darksilvania.deviantart.com/gallery/?catpath=/&q=7 princes of hell ) have been talking about releasing their ultimate weapon. A creation that could and would wipe out both armies if not controlled perfectly. And they're close to giving it the green light. But the war still carries on.

I'm saving seven spaces for the Satanic Council, and the rest is yours, FTB Forums. Massage me if you want to be a Prince of Hell.

Archangel: the highest rank of angel.

-Seraphim: the medics.
-Cherubim: the archers.

Priest: a normal Christian preacher who has been granted divine powers in the face of war.

Devil: No, not THE devil, the highest rank of hellspawn.

Cultist: the opposite of priest.

What will you bring to the war?:

(BTW gais if you clicked the link above then you should know that I call dibs on Asmodeus. And as fun as being on the Hellspawn side may be, we need a few angels too. Have fun!)

Race:
The 6th prince of Hell, Leviathan
http://darksilvania.deviantart.com/art/7-Princes-of-Hell-Leviathan-217416926?q=sort:time ((7 princes of hell) AND (by:darksilvania))&qo=1

What will you bring to the war?:
All the 7 princes have the ability to summon one another or in other words, teleport to one another. Leviathan is the Prince of envy. He has the power to suck out another's ability or reproduce their possessions.
Last edited: May 20, 2014
T

Shockwave said:
Name (be imaginative!):
Leviathan
Affiliation (angel or hellspawn):
Helspawn
Race:
The 6th prince of Hell, Leviathan
http://darksilvania.deviantart.com/art/7-Princes-of-Hell-Leviathan-217416926?q=sort:time ((7 princes of hell) AND (by:darksilvania))&qo=1
Gender:
Male
What will you bring to the war?:
Click to expand...

What is wrong with it?

Name:Lord E (meteor shower of cheese, radiating cheese-y ness mysteryously occurs whenever i try to think of a name.)(aka:i suck at names.)

Affliation: Hellspawn, but is apathetic towards the war. (if you wanted angels, dont come to FTB. example= Jadedcat)

race:Apogothyte.(custom, i try not to make it OP) (not too epic. does that flying black cloud thing from harry potter, and shoots black lightning that has really bad damage but has the equivilant of knockback 15. feel free to add more stuff to the class)

bring to war: i do not understand the question.
T

A) for some reason, Shockwave's links had merged but still worked, so I told him to fix it so there are two separate links.

B) 'What will you bring to the war' means 'how are you going to help your side?' or 'What unique things can you do that will give your side the upper hand?'. hope that helps!
T

I wish I could change the title. I have a feeling 'A Religion Roleplay' might be a bit of a turn-off.
S

I have edited my char sheet. 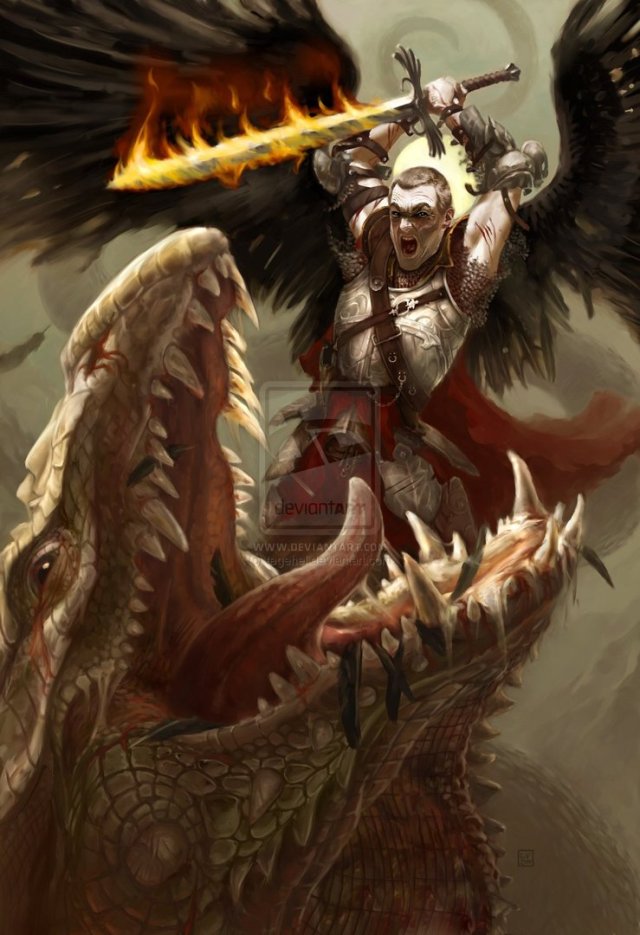 This is him taking down some evil creature, with his flaming sword of badassery.

What will you bring to the war?: He leads the forces of heaven against those of hell, and is brilliant in combat as well. He has the power to give great strength to his allies, and weaken those who oppose him. He's essentially Lucifer's nemesis. He also has a badass flaming sword, pretty forged from the soul of Chuck Norris.
Reactions: ThatOneSlowking

This is him taking down some evil creature, with his flaming sword of badassery.

What will you bring to the war?: He leads the forces of heaven against those of hell, and is brilliant in combat as well. He has the power to give great strength to his allies, and weaken those who oppose him. He's essentially Lucifer's nemesis. He also has a badass flaming sword, pretty forged from the soul of Chuck Norris.
Click to expand...

i dont know why everyone thinks chuck norris is so awesome. i dont care. he is just a guy.

Qazplm601 said:
i dont know why everyone thinks chuck norris is so awesome. i dont care. he is just a guy.
Click to expand...

It's just a joke. Admittedly an old one, but sill a joke nonetheless, e.g.

Q: How many press-ups can Chuck Norris do?
A: All of them.
Reactions: Shockwave and ThatOneSlowking
D

What will you bring to the war?:
Before God came to power there was discord, God wanted to vanquish this and so went tma for advice. The master of the discord went to Oma for advice too and being the centering force he was he gave the master a equal amount of advice. God took control of the discord and found the garden of Eden, upon reaching it he found out Oma had given the master advice too, in rage he banished Oma to a distant island where he would spend his days. It was Oma who had told God about the impending war, reluctantly God let Oma of the island and allowed him to enter heaven.

Sent from my ST26i using Tapatalk

Slowking you weren't even there.
T

the_j485 said:
Slowking you weren't even there.
Click to expand...

Anything to do with school for roleplay?
T

Yup. By the way, you're all accepted.

Asmodeus floated just above his assigned pedestal in the meeting room. The room was large, with ornate red bloodrock bricks making the walls and a big metal round table in the middle surrounded by pedestals.

He was early; there was no one else here. Asmodeus could faintly hear the clip-clop-clank of Satan's metal hoof-armour coming towards the door, accompanied by the angry grumbling that he usually brought to every meeting.

The door burst open and Satan stormed in the room, immediately charging over to the table, gripping its underside and pushing upwards. The table didn't budge.

"Lucifer bolted it down," Asmodeus said listlessly, in his seductive whisper of a voice, "he doesn't like you flipping his tables. Orichalcum is expensive, you know."

"Well then make it out of a cheaper metal then, dumbass!" Asmodeus noticed that Satan's accent changed according to his level of rage.

"SHUT UP, FUCKWIT! OF COURSE IT'S EASY!"

"I see you never took those counselling classes I paid for."

Satan came right up to his face and shouted, "FUCK YOUR COUNSELLING!" Asmodeus could smell the blood on Satan's skinless face.

"To be frank, if counselling were a human, I probably would."

Scuttling came from the corridor outside. "What the fuck is going on in there?" Multiple rattling voices asked.

The huge bug-like devil clambered across the... Ceiling... And dropped onto his pedestal. "Sit down, Satan," he said sternly, "let me get you a drink."

"No, you're an angerholic with a low alcohol tolerance."

And so the other princes of hell clanked, slithered, padded and floated into the meeting room. Once they were all sat down, Satan stood up again. Someone groaned.

"Okay," Satan said, "let me be the first to say," he slammed his hands on the table, "WHY THE FUCK ARE WE WAITING?! THE ANGELS OBVIOUSLY HAVE THE UPPER HAND! IF WE'RE GOING TO ACT, IT'S NOW OR NEVER!"

"WE'RE LOSING, PEOPLE! THAT'S SOMETHING WE CANNOT AFFORD TO DO! WE HAVE NO CHOICE!"

"WE HAVE TO RELEASE THE VERMIN!"

There was a shocked silence. It lasted for what seemed like hours, but was probably only half a minute.

"Satan," Mammon said slowly, "we've discussed this. We can't just do that. We have to wait that little bit longer."

Suddenly, Satan rushed forward off of his pedestal, grabbed Mammon by the throat and pinned him to the wall.

"We can't," Satan growled, "wait that little bit longer. We've been whittled down to nearly half our forces because you keep holding back."

"B-b-b-but we'll lose all of them if we let the Vermin loose! No one will survive unless we control it precisely and perfectly!"

"Well, it doesn't look like you have a choice." Satan was now holding a ball of hellfire dangerously close to Mammon's lupine face. Mammon whimpered a little.

Satan looked at the rest of the Satanic Council, who were starting to regret naming themselves after him. Even Lucifer seemed to be in a state of silent terror.