The Chicken Bones Mod - helps you pick up chicks! (Modjam 3) 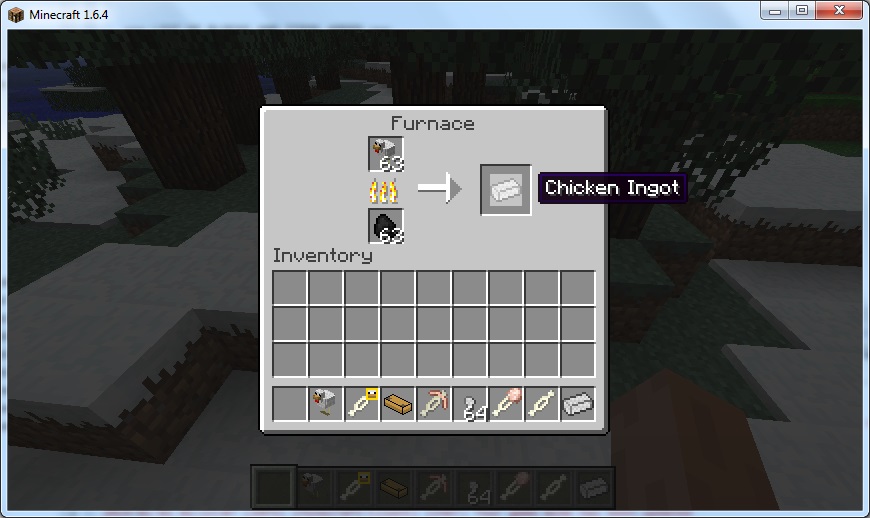 This was my submission for Modjam 3. When I submitted it, I expected that the Modjam team would host it somewhere. It appears they have not.

Here is the mod documentation I submitted to Modjam:

Oh, yeah, and there is french fries from other mod, MFC will be coming soon...
Z

What kind of Chicken Nuggest is it? The kind you eat, or....

Idk why this hasn't been added to FTB yet. I reckon it is an excellent mod and needs addition ASAP.
M

I've seen the chicken chest in Sl1pg8tr's CrazyCraft lets plays. There seems to be a dup bug when using the Inventory Tweaks shift-click to move things from your inventory to the chest.
Reactions: pc_assassin
M

Its probably just a sync issue, not an actual dupe.
M

Mr_Turing said:
Its probably just a sync issue, not an actual dupe.
Click to expand...

Nope it does actually dupe it when under half stack
P


Sent From Something That You Won't Care About Using Tapatalk 2
Click to expand...

Fixed that for you

Sent From Something That You Won't Care About Using Tapatalk 2
Reactions: PierceSG, madnewmy and pizzawolf14
T

Thegamerbromlg635 said:
I think the chicken chest has been grown out to be a duplicator and i think if it does update it should keep its duplicating abilities
Click to expand... Some recipes tweaked to add in Chicken Chunks (as a crafting ingredient).

Also, I couldn't see how to make a chicken chest duplicate items. Yes, it desyncs if you try to use your own chest, but if you open it again, or try to use the glitched items, it should go back to normal...
Last edited: Jul 11, 2015
T

Also Immibis can you make a mod that allows you to create your own lucky block in game?
I

I've uploaded a new version that should work with Java 7.
C

immibis said:
I've uploaded a new version that should work with Java 7.
Click to expand...