You are using an out of date browser. It may not display this or other websites correctly.
You should upgrade or use an alternative browser.
Y

y'know, I've seen etho do it before, but I think this would look really good with your builds aswell, having NPC's around the base that either do jobs or you can talk to
such as seeing archers ontop of the towers, or a farmer taking care of the horses, or a merchant in a shop

thouhg I don't know if it'll affect the FPS alot...

Yusunoha said:
y'know, I've seen etho do it before, but I think this would look really good with your builds aswell, having NPC's around the base that either do jobs or you can talk to
such as seeing archers ontop of the towers, or a farmer taking care of the horses, or a merchant in a shop

thouhg I don't know if it'll affect the FPS alot...
Click to expand...

I had planned to abduct a bunch of villagers and witchery village guards. But Custom NPCs have been mentioned a lot and it looks interesting, though quite "creative" like compared to what I usually do. I might add it and try it out, though the lack of decent non-Sphax x64 texture support bothers me a bit. Though I suppose I can cover most of the guards etc. up in armour etc.
Reactions: Yusunoha

First, congratulations on moving out of your cathedral. Second, the idea of gate guards in full Thaumium Fortress Armor is quite impressive (even the cultists Knight armor is badass). I agree it would be better if the textures were better, but I'll not complain due to my skill at texturing being as pisspoor as it is.
Reactions: RealKC

Did I catch last post of the page itis?

You can actually select user skins for CustomNPCs. So lack of texture support shouldn't be an issue.

I had been hoping it would skip to the next page for a while. That last page was getting a bit pic heavy


KingTriaxx said:
You can actually select user skins for CustomNPCs. So lack of texture support shouldn't be an issue.
Click to expand...

User skins are actually always low res due to game limitations. But yes there are almost limitless options from adding your own skins.

But have added Custom NPCs and had a look. By default there's a decent selection of skins(lowres) to choose from. Problem is really all the cool items and blocks it adds.
Most the "blocks" are bits like structures like Decocraft, so you wont really notice the low res on most. The armour, weapons and other items are really noticeable however.. 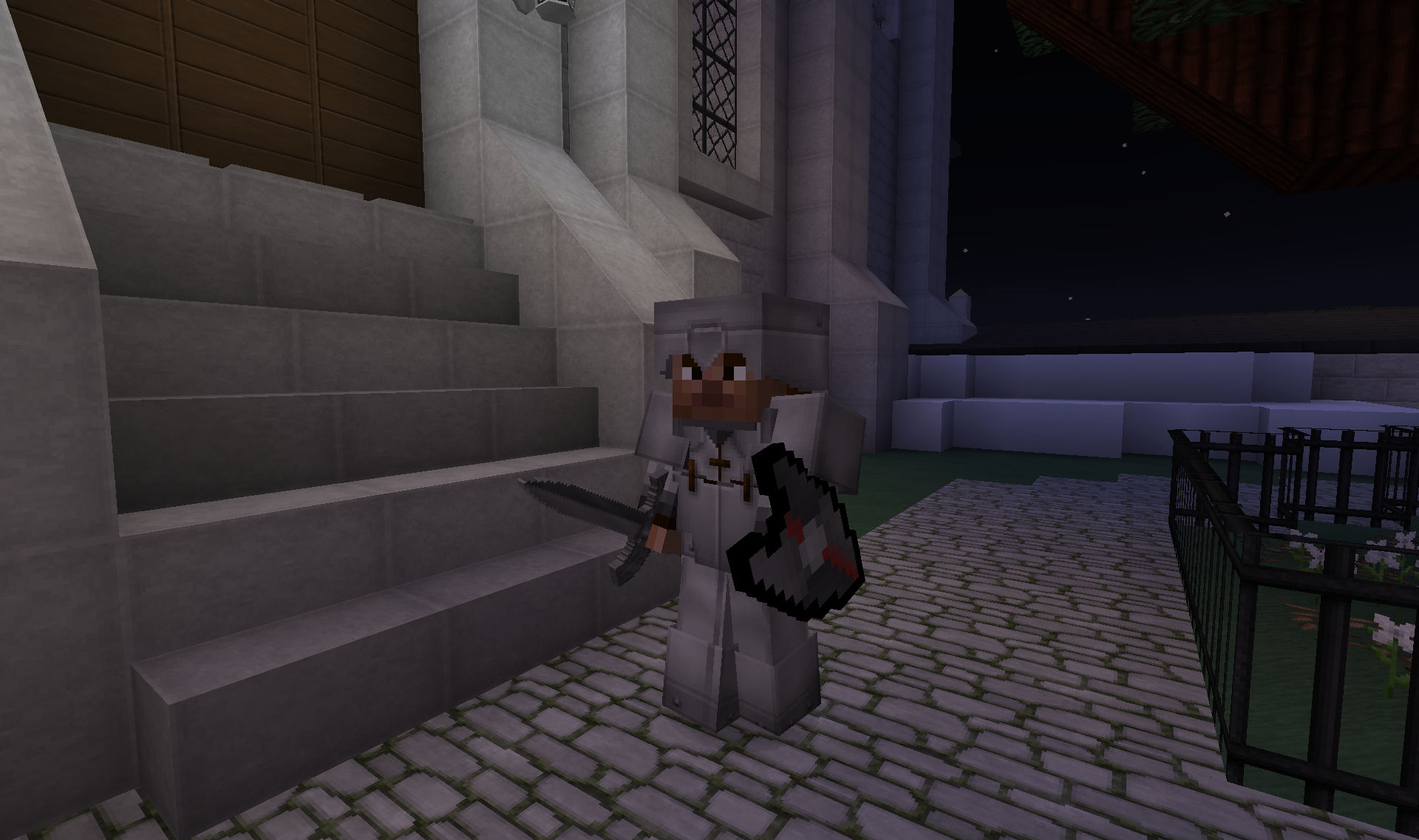 Made a patrolling guard in iron gear(Soartex texture) and with a Custom NPCs shield.

I meant did my post get missed because it was on the tail of the previous page. I suspect not, but just in case: A buildcraft gate set to produce a redstone signal if there's not a redstone signal will run at extremely high speed, and can turn a dispenser into the minecraft version of an SMG. It makes for epic murder holes. Use an AND gate to ensure the ability to turn it off so it's not making lag. Empties 9 stacks of arrows hilariously fast. For all your zombie apocalypse defense needs.

I meant did my post get missed because it was on the tail of the previous page. I suspect not, but just in case: A buildcraft gate set to produce a redstone signal if there's not a redstone signal will run at extremely high speed, and can turn a dispenser into the minecraft version of an SMG. It makes for epic murder holes. Use an AND gate to ensure the ability to turn it off so it's not making lag. Empties 9 stacks of arrows hilariously fast. For all your zombie apocalypse defense needs.
Click to expand...

Yeah I know
The aiming part sucks though. But have an alternative solution up the sleeve for a future update

I just have them fire straight down which is how a murder hole was supposed to work. But I'm now curious to see your idea.

Up until recently I have been going to a hole in the ground in my Aroma's Mining World to kill Wither bosses manually. It had been fine as I have not needed many Nether Stars. But it was getting a bit tiresome and saw it as a chance to make another practical build

I am building this mostly just for fun and as a cool little feature. It is not efficient or fast. I am also building it with mobGriefing set to false, so the wither is easily contained and will not break anything. 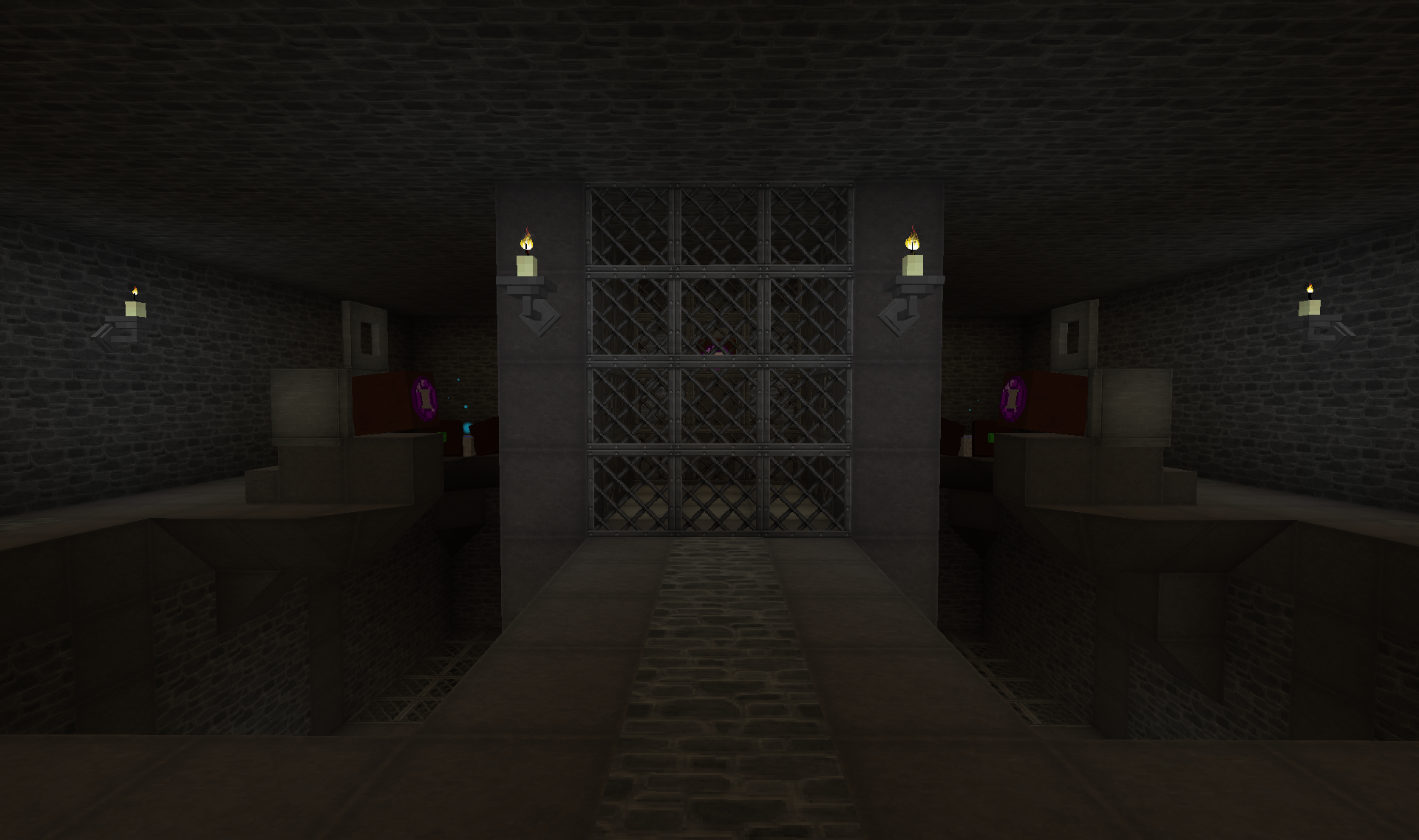 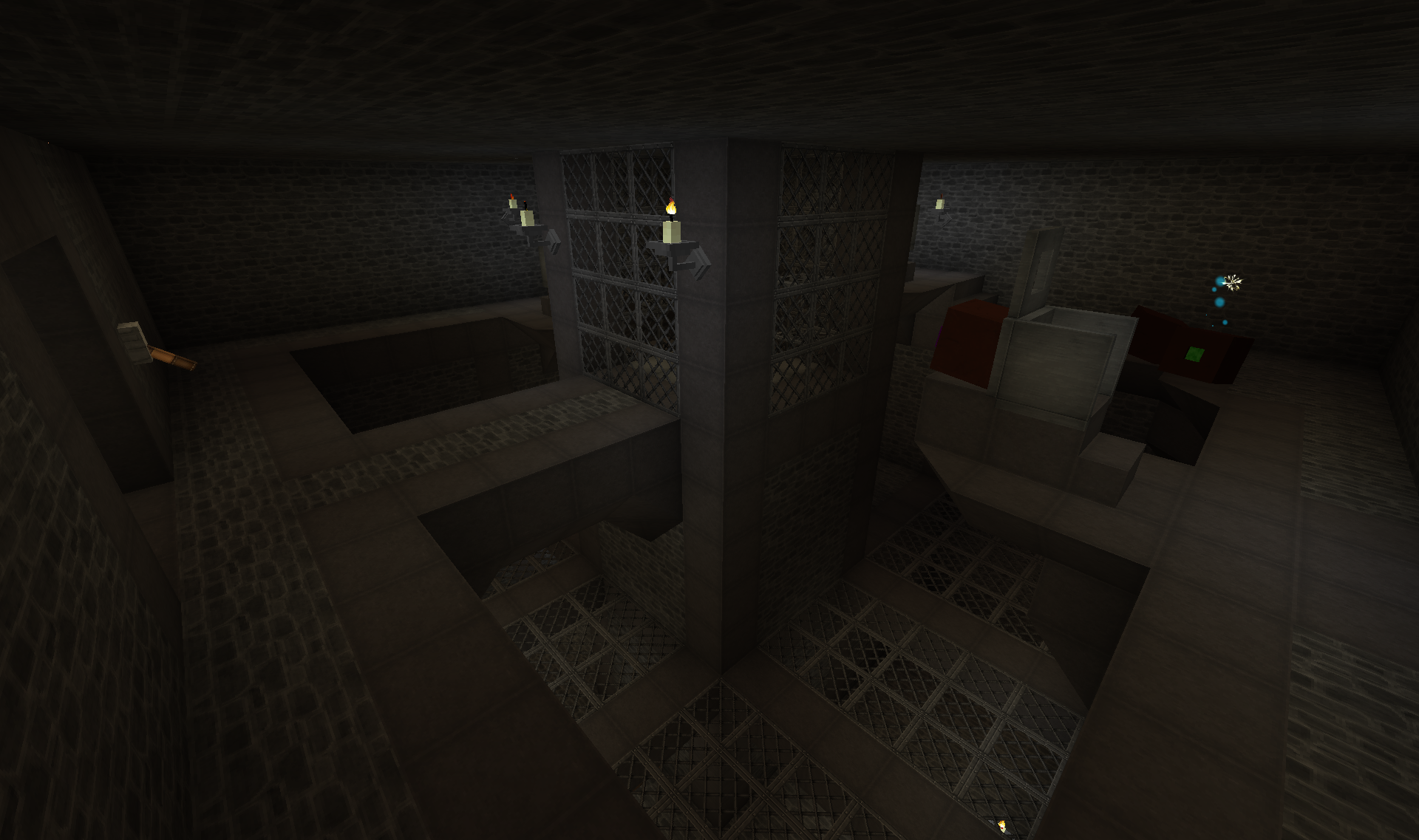 Down below in what is RPed as the dungeon, we find the usual wither spawning mechanisms: 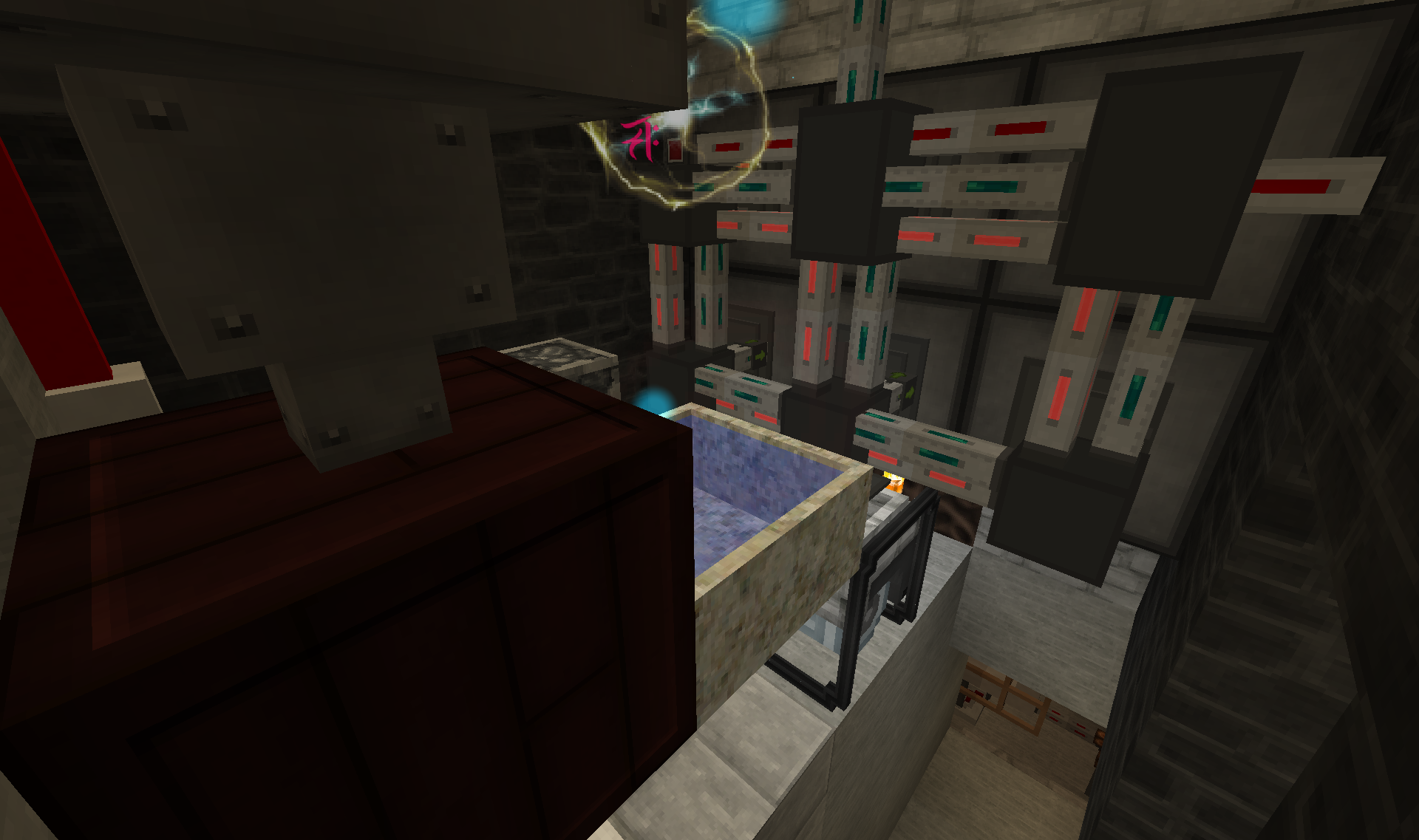 I built it quite compact to hard to get a good shot
A row of Autonomouse Activators placing Soulsand and another row placing Wither Skulls on redstone signal.
Also a single Endoflame(out of shot) producing Mana. 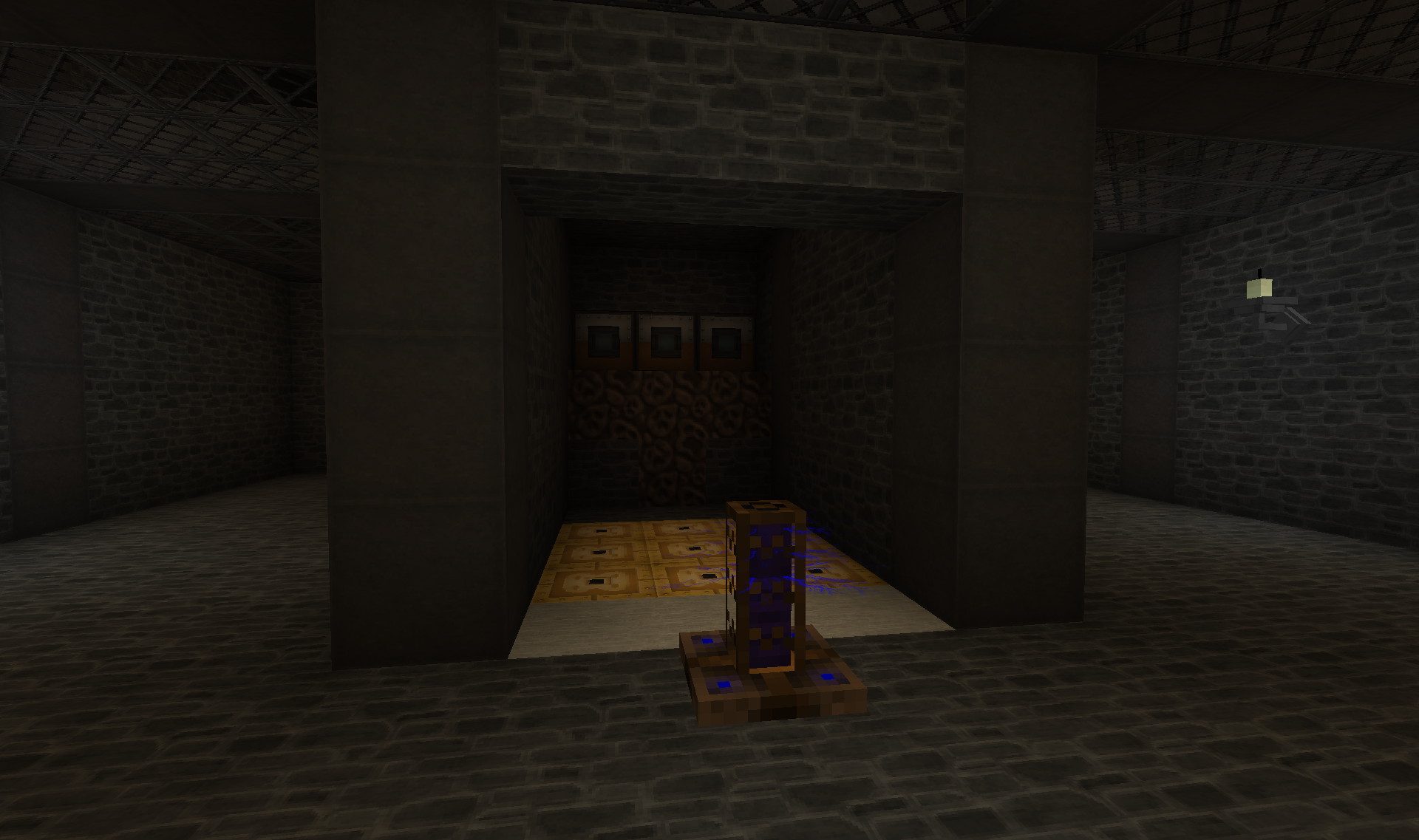 (Removed the wall for this shot)
Once the Wither spawns, it is pulled by a Corporeal Attractor onto the Drawbridges which then extends(and turns off the Attractor), bringing the Wither up into the cage above. 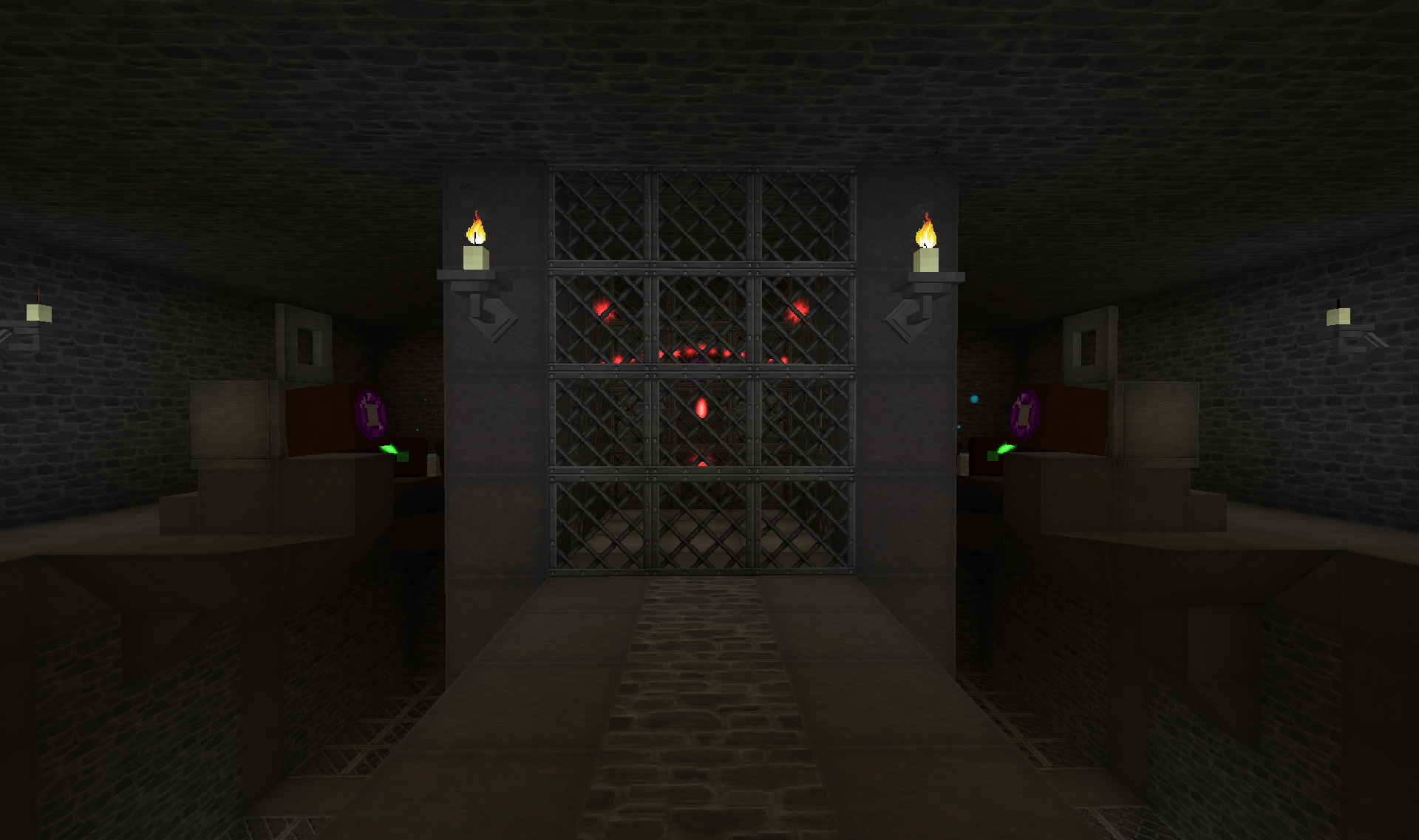 (This and the next picture is taken holding a Botania wand)
Around the cage I have placed 3 Redstone Mana Spreaders with "Bouncing Damaging" lenses. These are set to shoot through openings in the walls of the cage(plugged with Abstruse Platforms camouflaged with the glass) and aimed to bounce around inside the cage. The angle ensures that the burst doesn't just bounce straight back out again. 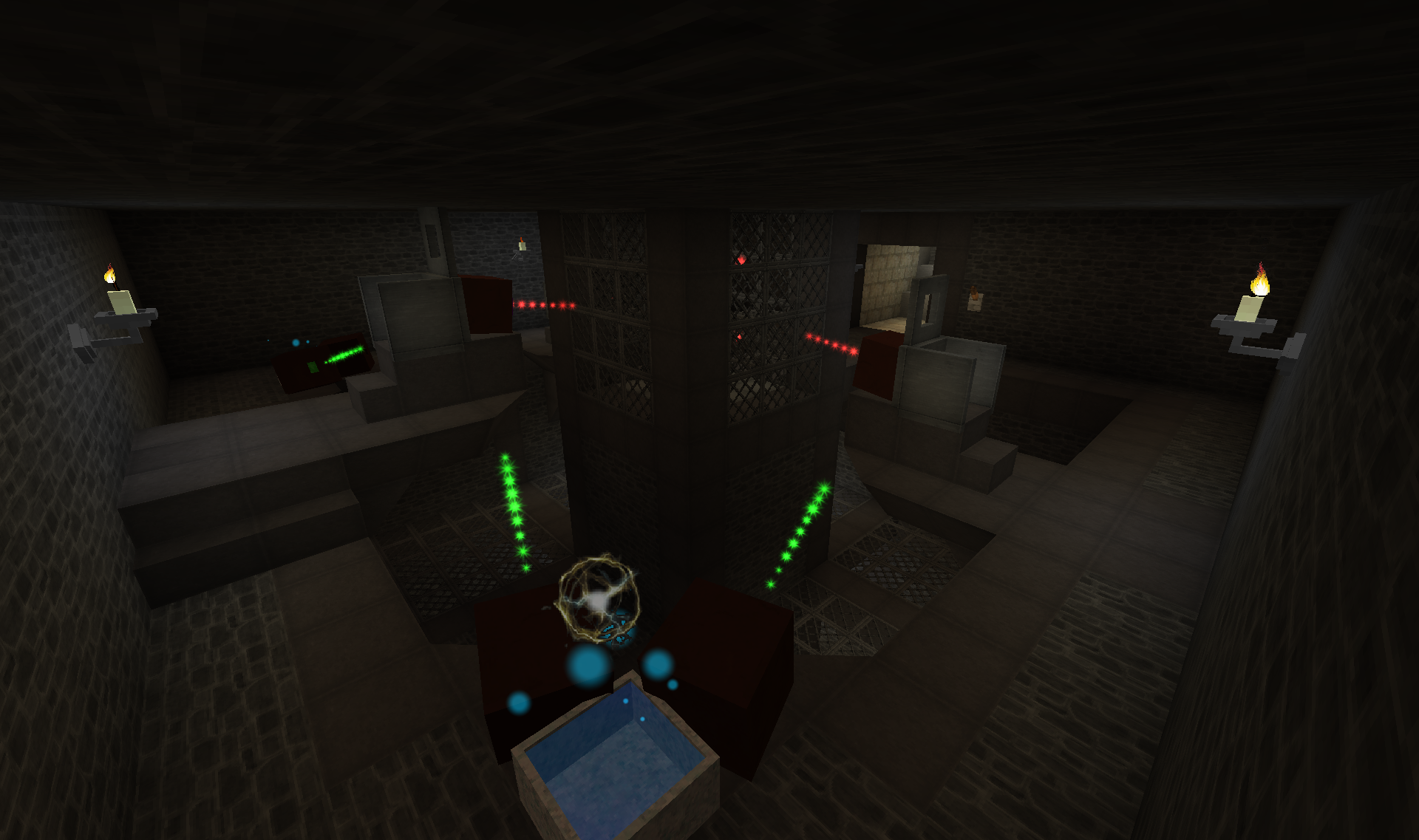 I decided to have the Spreaders charged by other spreaders, despite the slight loss. This was due to how I could avoid having Mana Pools at the Redstone Mana Spreaders and therefore build them up like small "turrets" of some sort(They use so little Mana that it is hilarious. I could probably have charged the main Mana pool once with a tablet and forgotten all about it ).

Time to introduce a Wither: 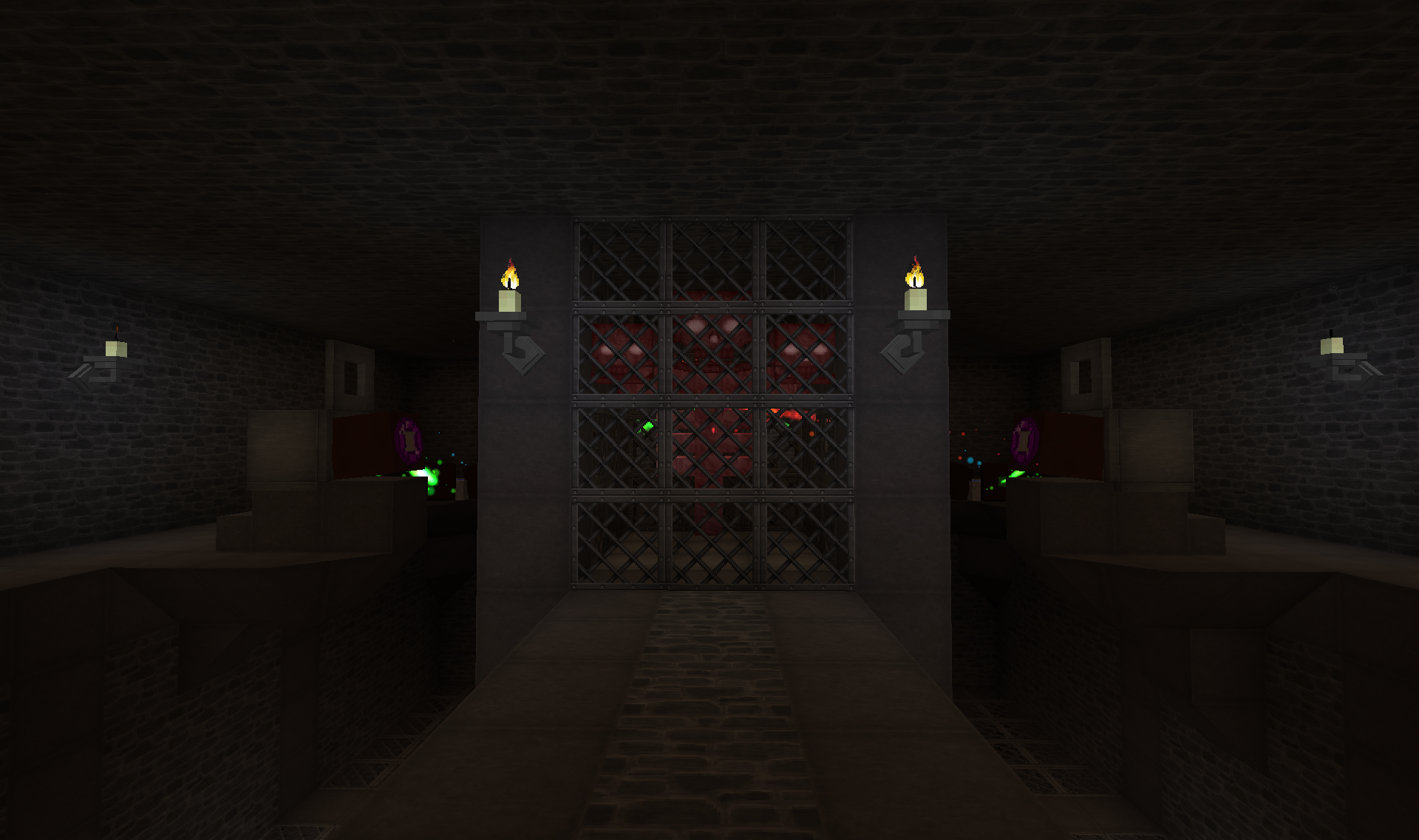 It turns out that the Bouncing Damaging bursts hurt each bounce that pass the boss. And they also seem to bounce off the boss in rather unpredictable ways, resulting in lots of accumulated hits per burst 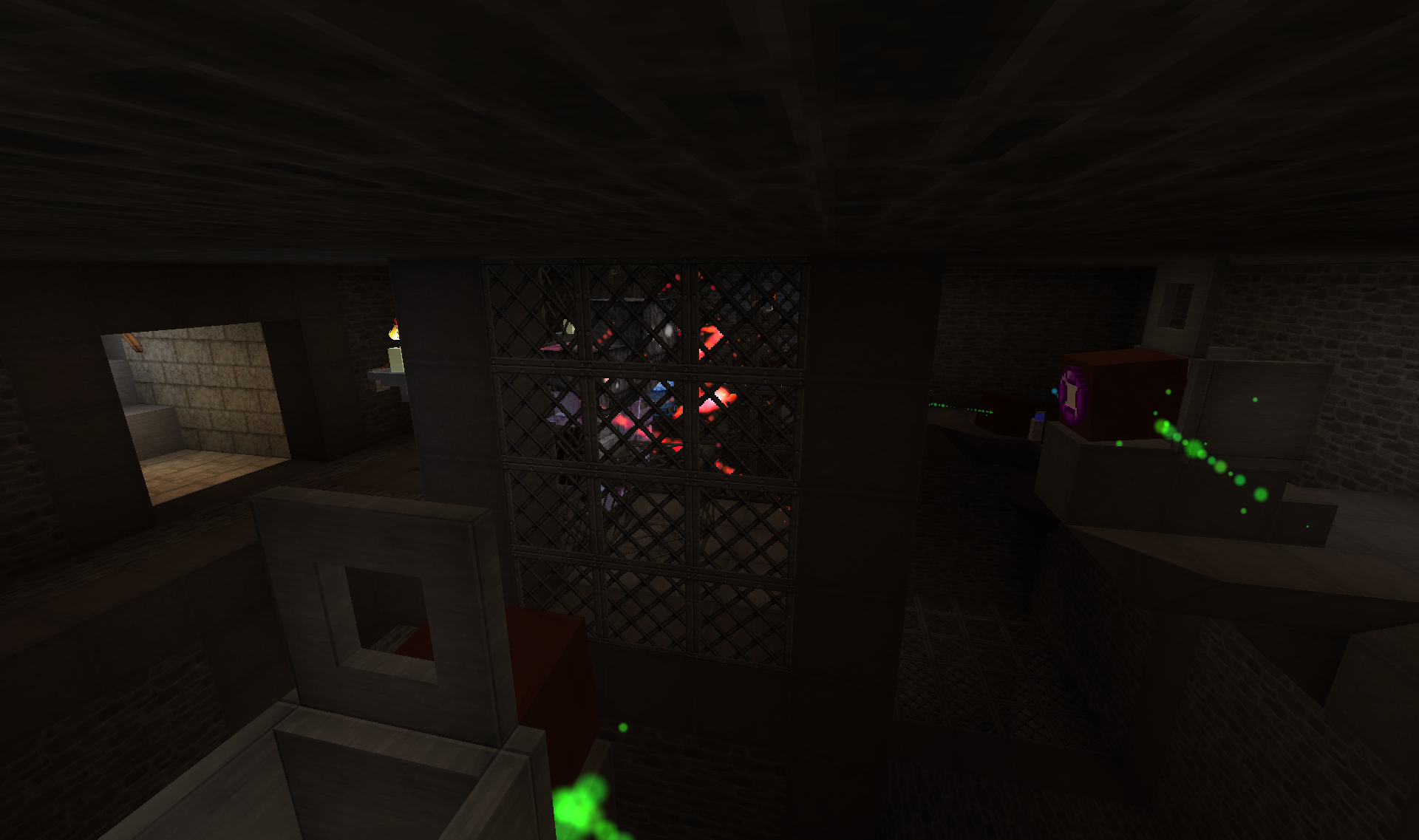 Even if the Wither moves off to one side, its hitbox seems to be large enough for the bouncing bursts to hurt it(even though it looks like it is bouncing back and forth besides it).

The Damaging bursts does not count like a player killing the wither, so no special drops will drop. But that just means that no Sigils will drop, which is a Win in my book You still get Nether Stars and Yellow Hearts.
The drops are picked up by a Random Things "Advanced Item Collector" attached to a ME interface hidden under the bridge.


Oh and if anyone was wondering: 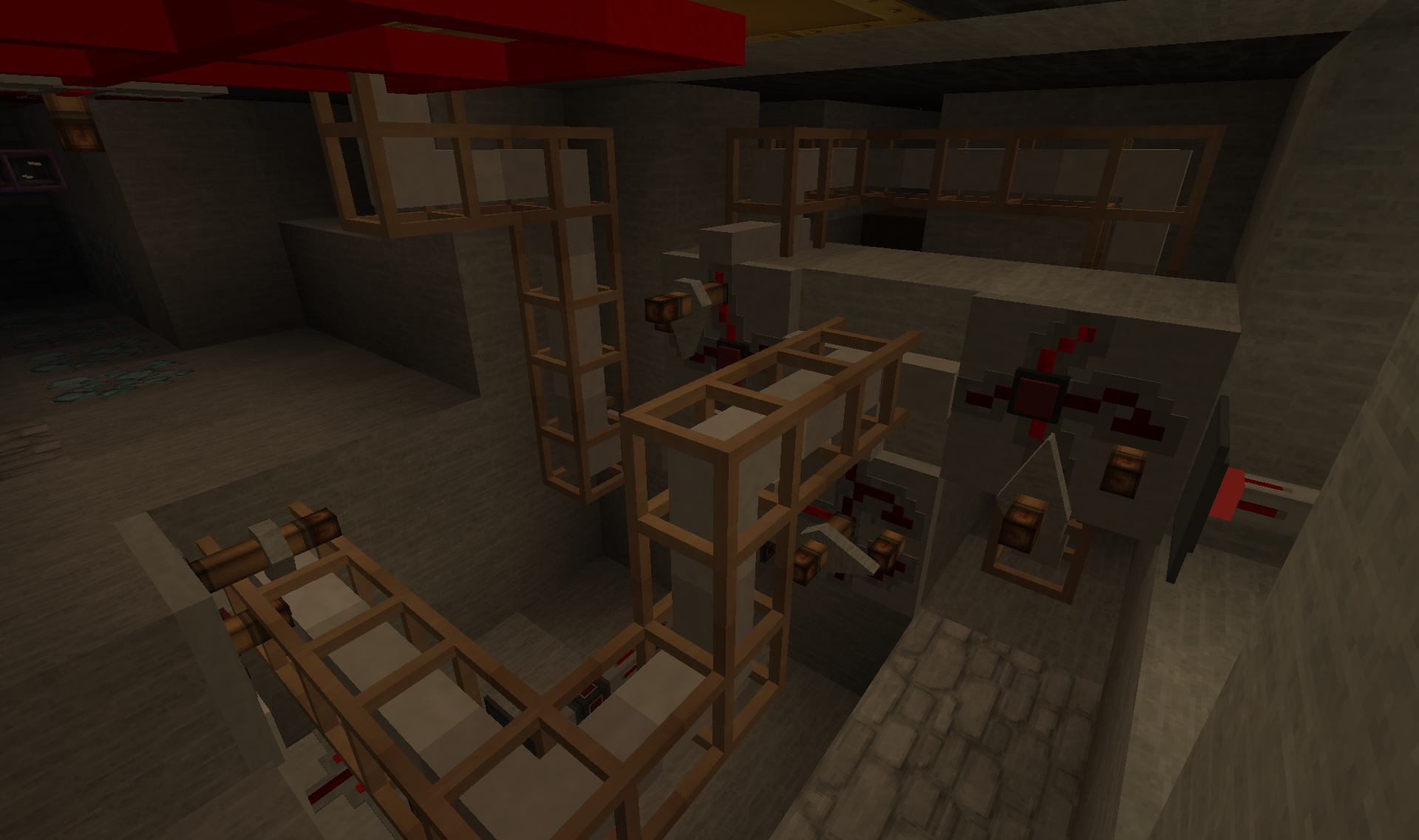 One State Cell's(top middle of the picture) constant output triggers the Drawbridges. This signal is inverted with a Not gate(Top left) to the Corporeal Attractor. The release of the constant signal will start a Timer which pulse restarts the State Cell(restart the cycle).

The timer pulse also triggers the Third State Cell(Bottom left) which constant output is wired into a NOT gate. This NOT gate then releases a Timer, which pulses the Redstone Mana Spreaders.

To stop the system, apply a redstone signal to the first two State Cells on the Lock side(make sure it is after it have brought up a wither and before it has spawned a new, or a Wither will be stuck down in the spawning area).
Reactions: Pyure, Mindfeak926, epidemia78 and 4 others 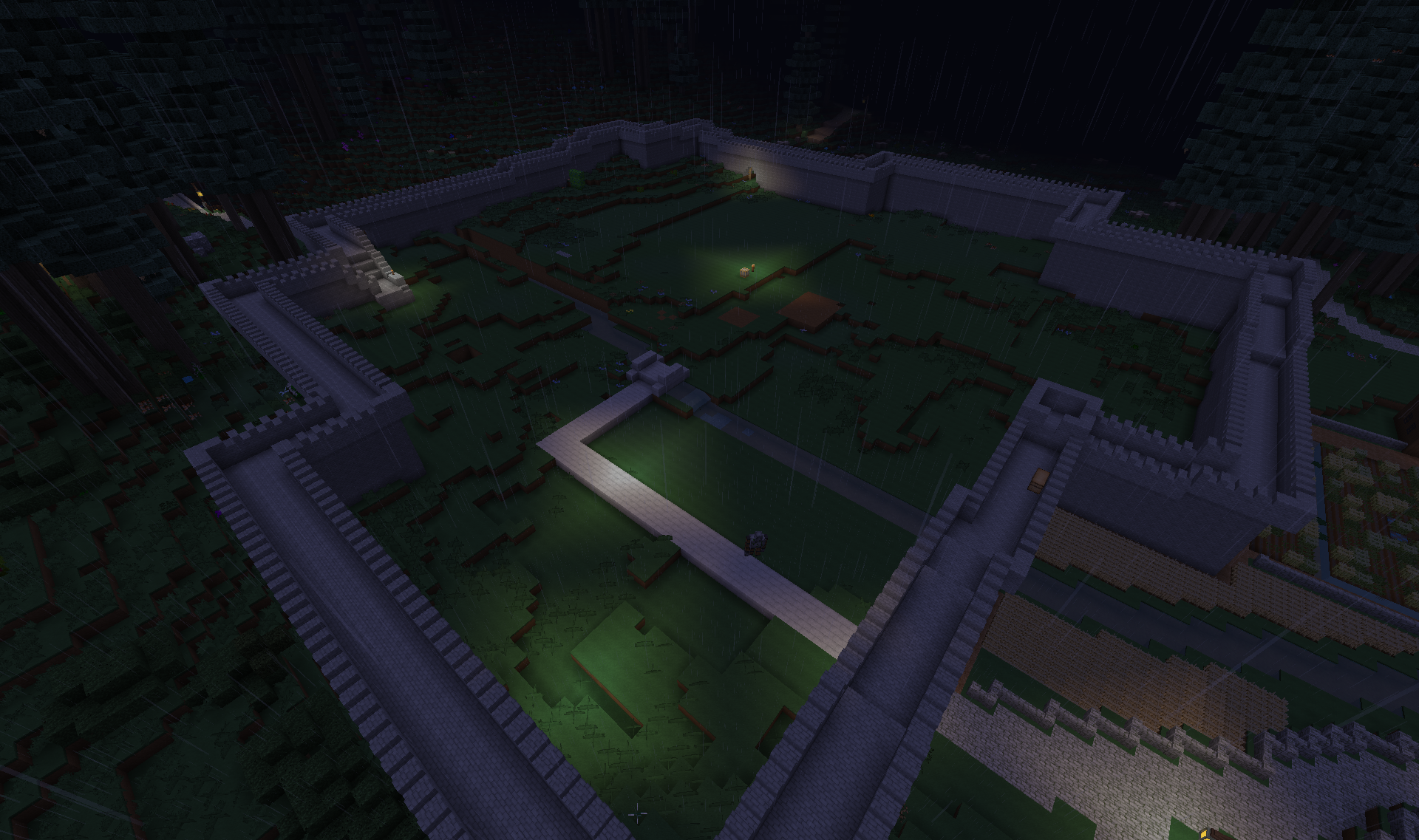 Someone or something have abducted the whole village!


I am pretty sure I am mad, undertaking another building project of this potential size alongside the castle...
Reactions: JaRyCu, Mindfeak926, rouge_bare and 2 others
E

Looking forward to seeing what you are going to do with that village.
R

That poor iron golem's still there... probibly thinking... what happened to my village?
Reactions: JaRyCu

Nah, just means you don't have to worry about the mob and the torches.

One thing is sure, I should have cleaned up the village a long time ago. The server dropped 1.5-2GB in RAM usage from just that. I have a suspicion that it could have been the jimmied Flaxbeards boiler automation I had set up early on.

A few sneak peaks of the "new" village in progress: 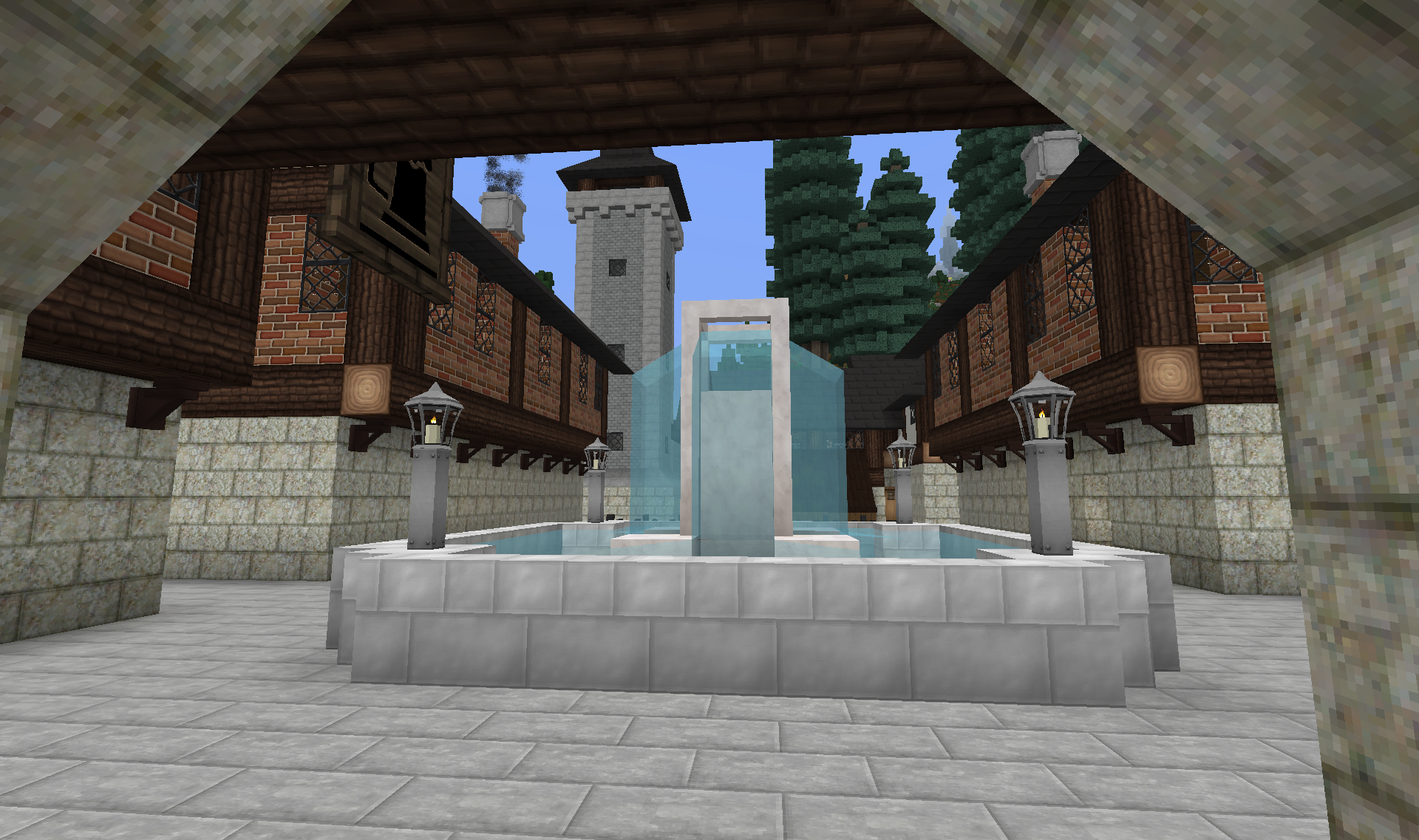 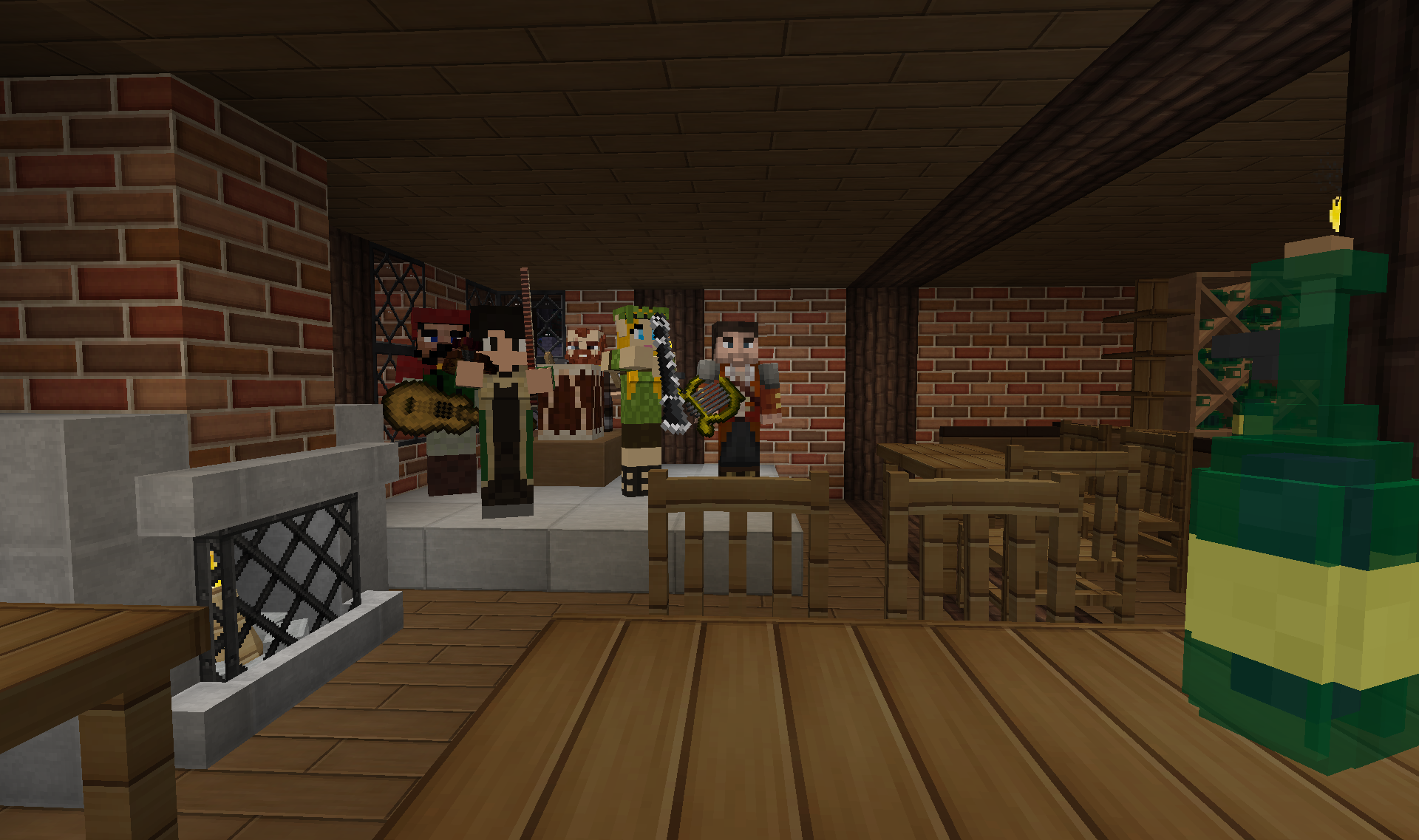 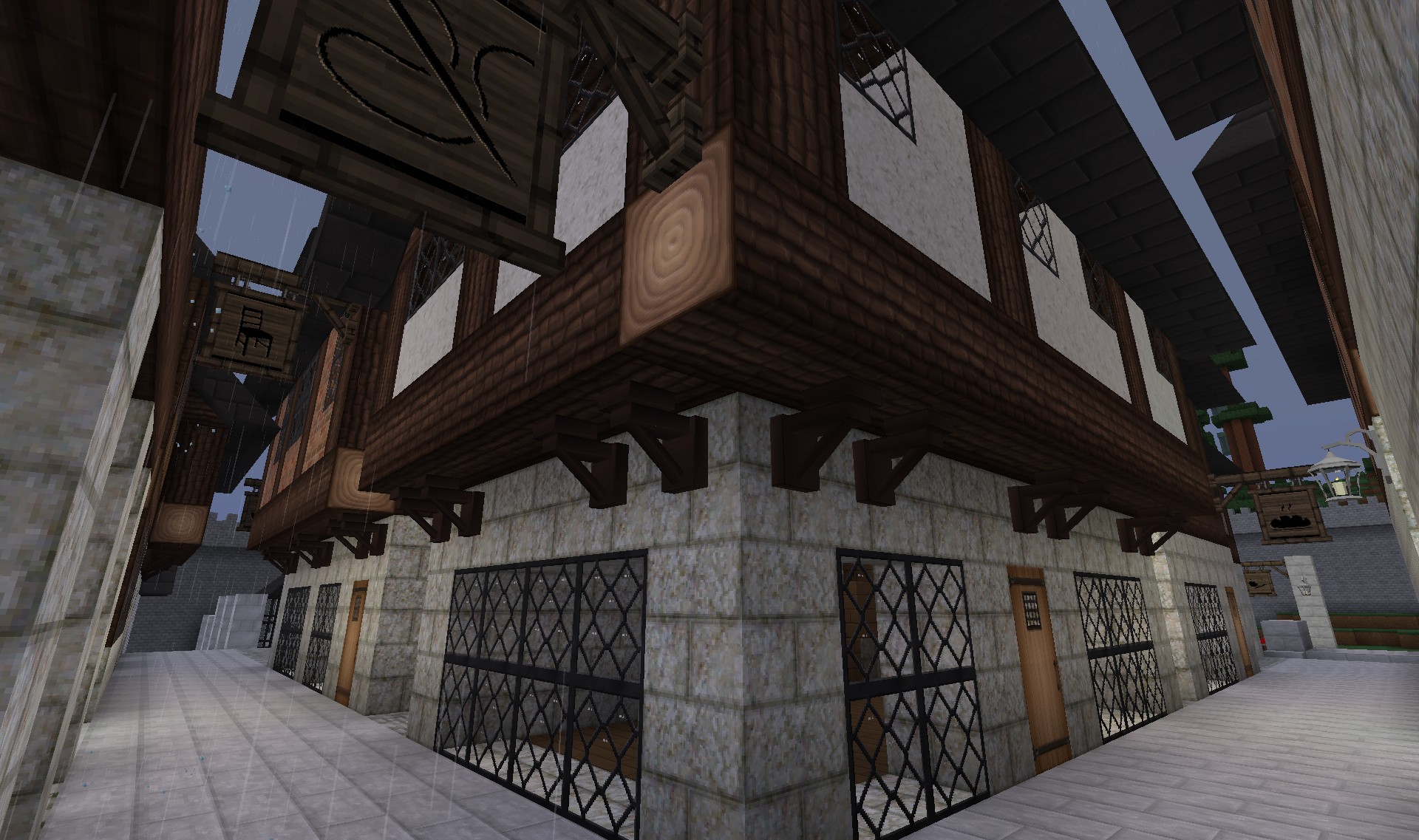 I would say that about 3/4 of the land is covered in terms of buildings now. What is left is mostly the poor side of town. So a lot of smaller houses perhaps, or weird mashed together ones.
And then there is of course all the detailing and actually putting stuff in all the houses
Reactions: Yusunoha

I'm some how seeing the poorer sections of Bravil in Oblivion? Where they're stacked up and not entirely centered on one another?

What are you using for those wooden braces? The ones connecting the stone walls to the logs on the second stories. I've been using fences, but they don't look anywhere close to that nice.

Edit: it's a shame how much the Custom NPCs stand out against your otherwise crisp textures. I think if the textures on them were even halfway to the rest of your quality, they would be amazing. I like the band idea, but it's like seeing NES Mario playing a role in a Michael Bay film (he needs to be stopped, BTW, but don't even get me started...). I hope your usage alone will prompt a decent texture artist to remedy this.
Last edited: Mar 26, 2016
L

oO jeebus how are you building so fast?

I keep telling myself to play with Immersive Engineering, but I continue to not do it. I'm adding it to my pack as soon as I get back in front of my computer. Too many things I've loved in that mod to not play with it.
Reactions: KingTriaxx and rhn
You must log in or register to reply here.
Share:
Facebook Twitter Reddit Pinterest Tumblr WhatsApp Email Share Link
Top Bottom