So I have not had the best luck building myself a power station to run my quarry and pumps and such.
I feel like the king in the Holy Grail......

I built a quarry , three combustion engines, a water pump, a refinery and all the piping and such to connect it. Then a creeper came and Ssssssss BOOM!!!

So I rebuilt it, all...... and then another creeper came up on me inthe middle of the day and ssssss Booom

So I rebuilt it, and this time I thought my cooling system was good, It was filling all three engines with water, the refinery was kicking but and taking names, it looked amazing. I went down into my quarry to mine the edges and clean up the visible ore and BOOM! all three engines kerploded (thats a lot like explode only bigger and more sadderer)

Anyways, so, how can I make the water pump faster? can I add more engines to the wooden pipe pulling water out of the tank? Or use gold pipes only, or do I deed to come straight from the pump pumping water into the engines?

Put it in the middle of a 3x3 1 deep pool of water and it's makes water like a good un.
I

if you use the thermal expansion aqueous accumulator around a few water sources and pump it straight into the combustion engines it can cool down 4 of them no problem. I only do 3 just to be safe myself though. Adding more redstone engines won't increase the speed if you pump it out of a tank. You can use a pump to pump it straight to the engines but some people have had glitches with water source blocks not loading correctly and losing the water, making the engines explode.
F

Whenever I use combustion engines I just make a 3x3 water pool and place the pump directly above the center block of water. I use 4 redstone engines for power and golden waterproof pipes going straight from the pump to the engines. I've never used a tank.

Although, I'd suggest trying out one of these bad boys. They provide a reliable source of water (reliable is the key word here hehe) and produce water at about the same rate as a pump with 4 redstone engines (I may be wrong).

Just dig a 3x1 trench, place it in the middle, and place two buckets of water to either side.
Reactions: CoderJ
M

Use the Aqueous Accumulators with Gold Waterproof pipes. If you use stone pipes, the water doesn't flow as well. Keep in mind something can still go wrong. I came back and two of Combustions engines had explored for no discernible reason. I had an AA providing water to each engine separately, meh.
D

I don't have my Thermal Expansion AA near any water and it works just fine.
F

DoctorCube said:
I don't have my Thermal Expansion AA near any water and it works just fine.
Click to expand...

Indeed, but it works much quicker when touching water source blocks .
B

i actually prefer bio gas engines...
same power output like combustion, never explode or overheat, need only one bucket of lava and a pipe providing biomass to run forever.
biomass is easily gathered with an automated sugar cane farm.
they can also use other fuel, like seed oil or honey.
B

FlukeSDS said:
Indeed, but it works much quicker when touching water source blocks .
Click to expand...

And also to note it works a damn site quicker with a water source block at every side, wiki says (or said) to put it above water, don't, put it in water.
M

I haven't encountered any problems by putting it under water.
P

My experiences dictate that an aqaeous accumulator RIGHT UNDER (no pipes) the combustion engine, touching a single block of water(with ANY of its sides - except below), will keep the engine topped up at all times. Make it two sources, as a security measure.
B

MortalDanger said:
I haven't encountered any problems by putting it under water.
Click to expand...

commas mean everything in what I wrote, let me explain it a different way.

The TE wiki said to put above water, don't do that, put it in water.

Edit I just checked and the wiki no longer says to put it above.
P

Yeah, well, whatever the wiki says, I've done the mythbuster thang and tested before posting, you can put water on any side except bellow.

The weird thing is that in my test setup the engine blew up regardless, it seems to be increasing it's temperature even though it's full of water.

Slap some gates on it, to make sure it stops on red or something.

EDIT: turns out one source is no longer enough when the engine hits 4900.6°C, then the water starts running out, use two sources.
T

I think your missing the point. All engines will explode if they are not providing MJ, when I say all I mean combustion and steam engines. Ill talk about steam engines here and the same really applies to the others.

Lets say you built your engines filled them with fuel and pump water into them. They start pumping and you get power. Now say once all the machines you have are fully charged. The Engines still have plenty of water and fuel....The problem is they are not outputting the MJ so they begin to overheat. Even if they are full of water they will eventually explode. The reason for this is that there is pressure in the steam engine, if the engine is outputting that pressure goes down to about half level, If the engine isnt outputting the pressure builds up till the engine goes boom EVEN if it is full of water.

There are 2 remedies. The First is redstone power cells. Im not sure if this is a bug or not but redstone power cells when connected to machines will continue to discharge EVEN after that MC is Charged so they will continue to require power from your engines. The engines continue to supply MJ to keep the Power cell topped up and wont explode. The other method is to use gates on pipes that move fuel from chests into your engines. You set up the gates to supply fuel only when the engine is both empty of fuel (so it only gets 1 fuel at a time) and then use another gate that only lets the fuel through if the engine doesnt have any MJ stored. If the Engines arent outputting MJ they dont get fuel and stop to cool down.
B

All you have to do to stop engines from exploding is use redstone energy conduit instead of conductive piping, certainly with the steam engines, not tried with combustion as I stay away from that beast.
P

Yes thedeester1, you're right, those beasts sure are prone to exploding, the limit of MJ's they can "store" (how the fuck does a combustion engine store energy anyway?) before starting to heat up again beyond 4900,6 °C seems to be at about 6k MJ's.

An oddity I noticed, is that despite the fact that a redstone cell can take up to 125 MJ/t and that a combustion engine should give 120 MJ/push (which is then delivered into the cell in a single tick), the engine will still build up energy. Using conduits seems to resolve this problem.

As a matter of fact, my testing setup now has 4 combustion engines, watered by one AA each, which in turn surrounded by two blocks of water each. The redstone energy cell is now full; and all 4 engines are at the stable temperature, and full of water.

This setup is now running for over 30 minutes. As such I deem it stable and encourage others to test it out. Picture as follows: 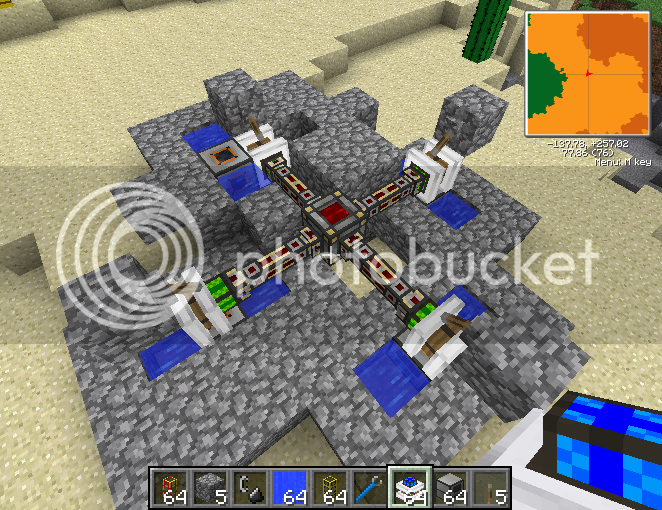 To recap: One aquaeous accumulator with two sources of water touching any of its faces (except below) can keep a combustion engine full of water up to the stable temperature which is 4900,6 °C. An engine will heat up to this point and stay there unless it store more than 6k MJs of energy. After an engine stores up more it will start to heat up again and no amount of water will keep it cooled. A redstone energy cell powered directly by a combustion engine cannot take in all of the energy the engine produces which will proceed to overload, overheat and explode. Redstone energy conduits are able however to even out these bursts of power over several ticks, this means that a redstone energy cell can store all of the energy produced without loss. In case the redstone energy cell is full, all the extra energy is dissipated, with no harmful effects, and the engines won't build up any power, this extra power is wasted however.
Reactions: ICountFrom0
Z

One aqueus accumulator is enough for more than one engine. I was running it stable with 3 engines per cell. With liquiducts it seem to be more, but BC liquid pipes are very weird and aqueus accumulator must be close to the engines and piping must be simple. Remember to never leave your combustion engines unattended if you don't have gate based shutoff system (or one aqueus accumulator next to the engine), due to liquid pipe behavior. I just run combustion engines with triple shutoff (energy cells accepting energy full, engine orange/red or manual shutoff), which is great for main power source for the base, because it allows for good on-demand production. The fact that one manual refill last for 13 hours of engine work is also helpful.
B