Hello just thought I would give you all a bit of an update on what is going on here at FTB; the big news this week is that development has started on our next big launcher version, launcher v2 which will bring a total redesign of the launcher as well as new features and more customisability.

A new and improved website adding many of the feature requests and improvements that the community requested has also started development recently which we expect to be released in the next few weeks; here is a sneak preview (feedback appreciated): 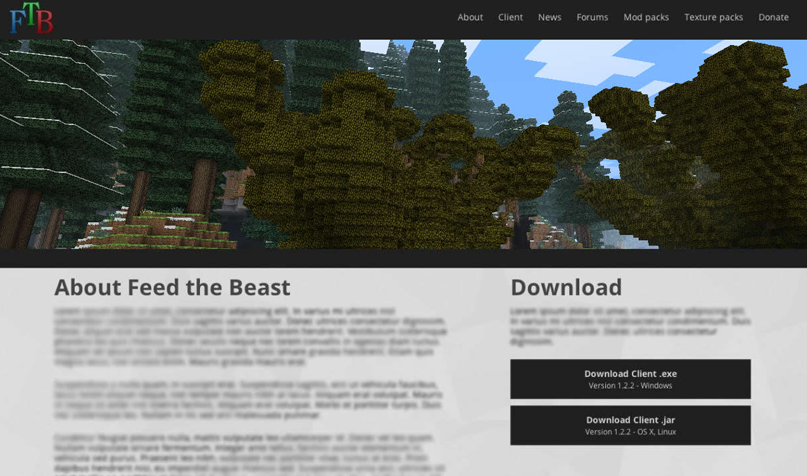 In other news work has began on the map for the pax tournament which will be released before pax for anyone wanting to get involved to practice before the tournament. We hope to have the ultimate pack finished soon, which is the best estimate we can give so please don’t ask for us a better one! We are currently waiting for a few mods before we release the ultimate pack, we always try our best to make maps forward compatible however this is not always possible.
Most of your worlds will work between packs as we keep id's the same throughout all our packs so you can change easily if you wish. The best packs for forward compatibility with ultimate pack are Direwolf20 or MindCrack, if you want to use greg tech then we recommend you use the MindCrack pack and if not you should use the Direwolf20 pack, there are also other differences between the packs so you should look at the full mod list for both packs on the launcher before making your decision.

Finally be sure to follow us on twitter here for regular updates about FTB: https://twitter.com/ftb_team
Reactions: Alcarkse, netcvb, arthahar and 19 others
A

GCYLO said:
Any news on the ultimate pack?
Click to expand...

I've been using the direwolf20 pack and enjoying it. Do you think you could release an "in theory" modlist for the ultimate pack?
B

If you are going to use a picture similar to the one you have in the mock-up now, I'd suggest using optifine to add mip-mapping and anti-aliasing, so it looks better. Alternatively, you could port the world into some sort of 3D modelling tool to make it much better looking.
B

If you hope to have the Ultimate pack finished soon are you in a position to at least let us know what mods are included in it?

And if you take RedPower out like some have suggested Slowpoke mentioning on his stream I'm gonna scream so loud Pax will be shut down.
J

User was given a warning for flame bait for this post
So basically you're copying Technic and making a Launcher version 2.0?
Reactions: Mooseman9
A

Yes, because no one but Technic has ever made a version 2 of their software. Obvious plagiarism.
Reactions: kolikooo1, jatie1, TiGSpudgeaholic and 10 others
A

GreenWolf13 said:
So you're progressing and making a Launcher version 2.0
Click to expand...

He got to it before I did:
arkangyl said "Yes, because no one but Technic has ever made a version 2 of their software. Obvious plagiarism."
J

Looks awesome, but the banner screenshot is kind of meh. Feed the Beast needs some higher quality ones then that!
G

I just find it odd that FTB decides to start developing a version 2.0 right after Technic announces their new launcher.
Reactions: Mooseman9
I

Is there anything going on in Pax with Minecraft maybe? I'm so out of the loop.. xD
C

So mad. You should spam all the modders on twitter about it
R

The image showen will not be staying it purely to show the concept.
R

We also have website v2, forum v2, stats page v2 and all the things v2 coming out soon!

Any idea when the modpacks will be updated next? The mindcrack has a bunch of game crashing errors.