Theres a small diminishing return (none on the sandstone if you use grindballs, thoo the grindballs then get used up) - but nothing that would really matter, the power you invest into it balance it allright
M

Cool, that means I don't need to set up sand synth for my "I got carried away" soul sand and mushroom farm. Also, thank you for your response!
Z

I'm at near to ignite my fusion reactor and powering my Stargate.

I've a question about T5, I don't want to be spoiled but I'm asking if isn't a one time thing.

I mean if I go to T5 and can craft my own tardis a friend can go to o T5 and craft it's own tardis.

Everyone that can enter the stargate can do t5.
M

A couple random hints/tips for T1. (Just made it to Mars yesterday ... and having a blast with this pack. )

Like both your tipps and the video, thoo the "Perpetuum mobile" (i have pictures on page 21) is better in my eyes, since its real free power for 10+ stirlings and you can use your lava for obsidian
N

Was forge multipart/microblocks omitted from this pack for performance reasons? I find it is something I am really missing for creating compact systems.
R

Hi, im new to modded. Im trying to take the charcoal from my furnace directly to my generators, it isnt working.
S

Caithleen said:
You dont. It would break the entire pack.
IIRC you need to craft the torches fresh and dont let them touch your inventory so they dont become gc ones.
You would need to cheat more in. Or look at chiseles tyrian or quartzs blocks
Click to expand...

Is there any way to repair the RR Pickaxe without making a new one?
W

Rich72 said:
Hi, im new to modded. Im trying to take the charcoal from my furnace directly to my generators, it isnt working.
Click to expand...

What are you trying to use? You can use transfer node (items), and I'm pretty sure relocator pipes work as well. More information about what you are doing would be beneficial.
R

Warmastr said:
What are you trying to use? You can use transfer node (items), and I'm pretty sure relocator pipes work as well. More information about what you are doing would be beneficial.
Click to expand...

A transfer node with a filter and speed upgrades, it takes my coal that im using but not the charcoal (product)
N

Warmastr said:
Is there any way to repair the RR Pickaxe without making a new one?
Click to expand...

It takes RF. Capacitor and other items have a charging slot you can toss it in.
2

Ok, so now that I am working on my mars base, what do you think I'll need in it?
So far, all I've got are rf teleporters to the moon base, a galacticraft telepad to the planet surface, ( I wanted a space station, so I'm building at y=200) and a "control room" hooked up with rftools screens monitering the base' status (rf, o2) and galacticraft screens.

Current powergen is somewhat satisfied by galacticraft solars, but barely. I'm planning on using this as my t2 base.

Currently, I still need to set up a crafting area, oxygen generation, powergen, a machine room, and a small greenhouse.

What should I use for t2 power gen? Just continue with hydrogen stirlings?

Also, is there anything else I'm missing? How much extra space should I have set aside for future t2 endeavors?

Last question, I can't get the galacticraft screen to hook up to my telemetry unit. I've got the other block it needs right next to it, but it doesn't seem to register.
Last edited: Oct 13, 2015
2

Rich72 said:
A transfer node with a filter and speed upgrades, it takes my coal that im using but not the charcoal (product)
Click to expand...

Does the side it connects to matter with vanella furnaces?

As an alternate workaround for the time being, I know that vanilla hoppers function perfectly with furnaces. They can feed in even modded fuel items, and will only pull the product out. I made some lrather sweet auto-smelting systems back in my vanella days where I could plop multiple stacks of various ores in one chest, use some redstone wizardry involving dropper transport and hoppers, and have the output in another chest. Granted, the setup took up an entire wall, but its rather luxurious for vanella.
W

NeuroticHamster said:
It takes RF. Capacitor and other items have a charging slot you can toss it in.
Click to expand...

OMG lol why didn't I think of that? I mean, it took two redstone blocks to make it but meh..ok, thanks!
W

Rich72 said:
A transfer node with a filter and speed upgrades, it takes my coal that im using but not the charcoal (product)
Click to expand...

I got it to work the first try, I'm assuming you meant the vanilla furnace so that is what I used for my test, but the attached image should help. 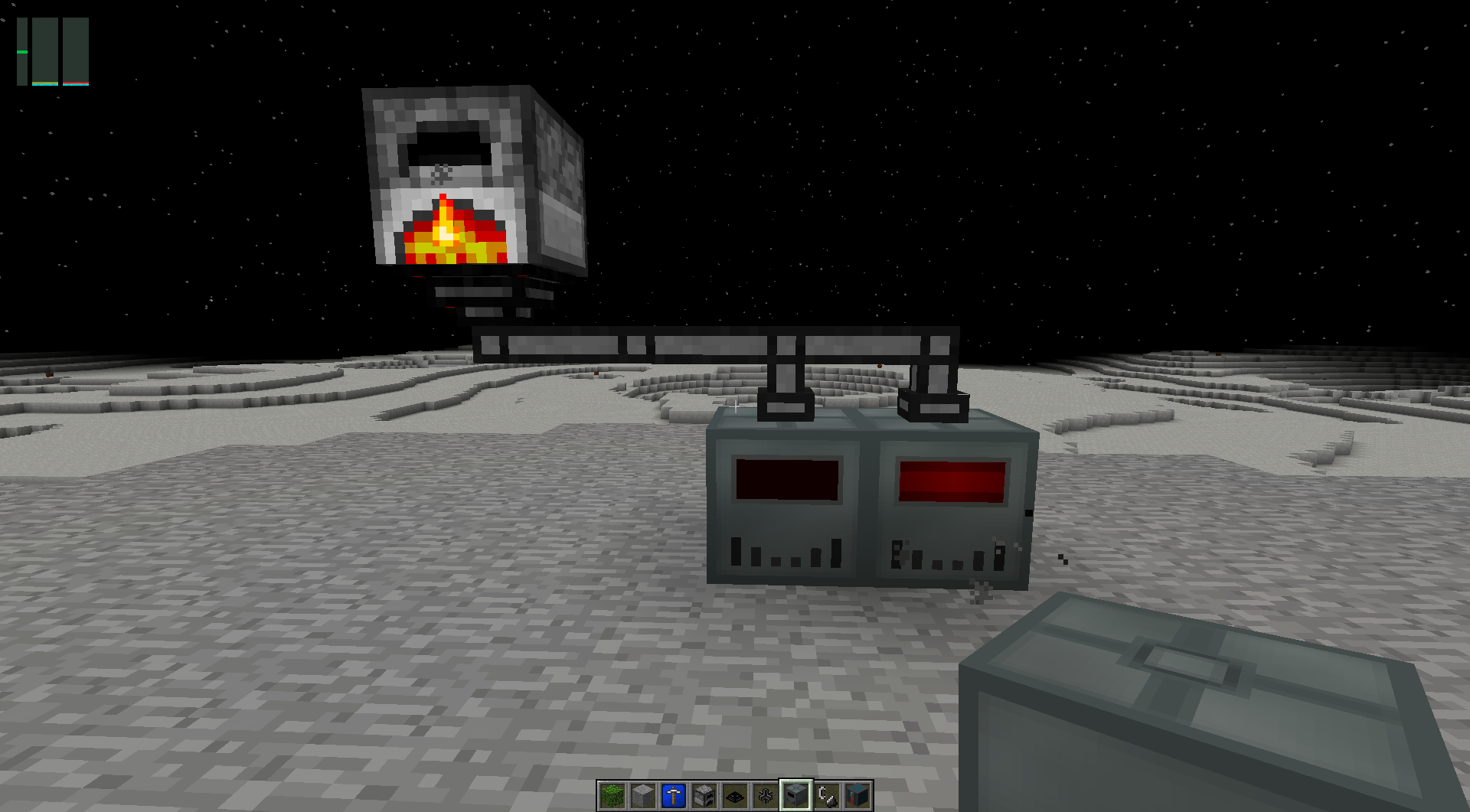 Edit: Inside the furnace I used coal to burn logs for the charcoal.
Q

A few ideas and questions from where I'm at the T3 level (Tier 3 Rocket done, mining Pluto with an Ender Quarry, but still gearing up for a NuclearCraft Fusion Reactor.)

-The special "celebrity shout out" elements used to make the Venus Crystals (which are in turn needed to start the Stargate questline) mainly revolve around combinations of 99 which is Einsteinium, the core element you get from Ender Pearls. With that in mind, I used a Soul Vial on an Enderman from a spawn egg I got as a quest reward, used that to change the broken spawner I received as a reward for finishing a quest tree and turned it into an Enderman spawner, but that in an EnderIO Powered Spawner with a Dual Layer Capacitor, put it in a room with Diamond and Gold Spikes on the far wall, Fans blowing into the wall, a Vacuum Hopper in the middle of the wall of spikes to collect the items (with Item Conduit running those items out of the room to a Sorting Chest to go into Sorting Barrels, one each for Ender Pearls, Enderman Heads, and Unknown Dimlets), and for good measure a Black Hole Hopper just above the Vacuum Hopper with a Diamond Spike on the wall side of it to really suck the Endermen into the spikes (and because with a 4 block radius room around the Powered Spawner the fans don't quiet reach to the wall of spikes from the far side of the room.) I upgraded the barrels to hold tons of stuff so I can let the Ender Pearls pile up

-Cursed Earth (made in this pack with dirt and a Nether Star, one piece is all you need to get started as it spreads to dirt) in a kill room with Fans blowing into a wall of Diamond and/or Gold Spikes with a Vacuum Hopper and Black Hole Hopper set up is great for pulling in resources. As an added bonus, put OpenBlocks Tanks down into the ground a few layers deep under the kill area, put the XP Grates on the top so the XP falls in, and then I have a bunch of Liquid XP - I have started putting some Ender Fluid Conduit in at the bottom of that big connected mass of Tanks and sucking some of that Liquid XP out into Drums, and a Bedrockium Drum would be a great option to really store a bunch. Use that with an Auto-Enchanter or the XP Rod from EnderIO to do it manually by giving yourself the levels you want then doing your enchanting.

-Experimenting in a test world to find a way to regulate the temperature (and thus efficiency) of a NuclearCraft Fusion Reactor, I found that they cool off really fast so I don't need to turn it off for very long. Best way I've found so far is to have a redstone torch tower under the middle of the bottom of the Fusion Reactor that has the top redstone torch off when no signal is applied to the bottom part, run a redstone dot into the bottom torch, then run an RFTools Counter into that and an Extral Utilities Redstone Clock behind that. That way you can set the Counter to how many seconds you want it to wait between redstone pulses. In my preliminary testing, that pulse is enough to drop the temperature in a reactor by 50+ MK so I was trying Counter values of around 180 to 200 and it was working decently well, but it needs some tweaking to fine tune it. Still, best way I've found so far that is fairly compact and thus easy to set up.

-As part of that early testing with NuclearCraft Fusion Reactors, I found that a 4 reactor block Reactor fueled by dual H (the most common thing from running empty cells through an Electrolyser) will get up to just under 16000 rf/tick (so presumably it is just under 4000 rf/tick per reactor block.) This is better than the Advanced Generator I had powering my base but far less powerful than a T/D reaction. That said, though, it is a great way to use up all that H that piles up while running empty cells through the Electrolyser to get the T and D.

-I seem to be having a problem that I saw someone else post about but never saw an answer, it's with NuclearCraft, I can't place the Fusion Reactor block in the spot I made for it in my base. The Reactor block is a 3x3 and I carved out a 5x5x5 area but I can't place it in the middle, tried digging it out to a 7x7x7 and still no. Saw a suggestion to place blocks in the area I want to put it and break them to clear out any strange air blocks but I tried that and still can't place my Reactor block. Any other ideas?

-I have a tree farm ->< Chemical Decomposers -> Chemical Synthesizer -> EnderIO Tank -> Gas Generator (multiblock from Advanced Generators) set up for Propane as my power supply for an Ender Quarry on Pluto but it was really tricky to get set to run consistently because the Synthesizer would clock up with either all Carbon or all Hydrogen and finally the best I found was to put 2 speed upgrades in the EnderIO Item Conduit pulling from a barrel of Carbon and 7 upgrades on the Item Conduit from the Hydrogen barrel (since the goal is C3H8.) I wish that the Chemical Synthesizer could save the last item in a stack in its internal buffer/inventory so that it couldn't ever run out of room for a given input. Anyone found any way to do something like that?
Reactions: Caithleen
2

Show off your bases! Best ones will be inserted into the Media feature on original post mentioning you! For multiple Pics please create an imgur album and link it!
QUOTE]

Probably not something you'd want to put up in your post seeing as it's only two rooms, but I'll update the gallery as construction continues.

Warmastr said:
I got it to work the first try, I'm assuming you meant the vanilla furnace so that is what I used for my test, but the attached image should help.
View attachment 23803

Edit: Inside the furnace I used coal to burn logs for the charcoal.
Click to expand...