Its a Colourful Life: A Polychromatic World multiplayer

Preamble: This is my first go at a playthrough thread; I am gaming with some friends I previously played Regrowth with. Unfortunately I didn't get any screenshots of my first few hours gameplay, but hopefully that won't reflect too badly!

A Polychromatic World is a magic based 1.7.10 modpack by LordPINE, which I have played some of in a previous world - its a lot of fun, and has ChromatiCraft as a primary mod. With that in mind, the mod is progression based and aimed around discovery - therefore this whole thread could be considered spoilers for ChromatiCraft, so if you don't want anything spoiled, you may want to stop here! Otherwise... read on

I awoke, as I have so many times before, to a new world - one shared with the same compatriots I had adventured with before. But this land... so vibrant, and colourful - full of life, unlike the parched, barren land we'd previously found ourselves in. Peculiar dark stone structures with glowing runes and topped by an orb of energy dotted the landscape, perilous for any who approach. This place was beautiful, yet dangerous.

But, this time, I had an advantage. A vision. I knew where to go.

I set off, directly into the West. Striding through wood and valley, across beach and river. Until the sight I had been looking for met my eyes: a forest. But not verdant, like the lush oak, dark oak and birch I had passed earlier - instead, trees and flowers of every shade and hue, both natural and unnatural, were spread as far as the eye could see. Most of all though, the landscape was lit with an unearthly, yet beneficent light, that I knew would keep the horrors of night at bay.

I found a natural cave nearby, and explored. Many ores I could not mine lay around, alongside strange unidentifiable crystalline growths, seemingly in all the colours presented by the trees and flowers around. I made temporary camp by a river near the cave, knowing that the riverbed resources would be useful.

Many hours work later, and I had obtained the materials to build facilities to develop and improve tools, a smeltery to turn the ores I could mine into a molten form that parts could be cast from, and even (once sourcing a particular colour of crystal - one of an orange hue, that seemed to radiate heat) a small oven often used by those inclined towards witchcraft to bottle the essences of nature themselves. After breaking some more of the strange crystals, I obtained shards, that I combined with wooden rods to create a tool for manipulating some of the colourful energies emitted by the strange dark constructs I had observed. A few more, and I was able to create a table that seemed attuned to the rod I had made. Perhaps I'll discover more to do with those, in time.

I set about obtaining seeds to further my witching ambitions, and soon had a bed to pass the night, a small farm, and even a portal to a flat realm that seemed ideal for further exploration. Even better, a short distance away from my entry point (strangely underground) was a village, where it seemed its large-nosed inhabitants had been gathering artifacts and information relating to whatever luminary magic permeated this land, as well as other oddities they did not understand.

Clearly, they were not in the best position to make good use of that information, unlike myself... I gathered the sheaves of paper, stuffed them into my journal, filled my pockets with what I could carry, and hurried back from whence I'd come. This place warrants another visit, in future...

So, that's as far as I've gotten. I'll try and add in some pictures later, we'll see how that goes Hopefully I'll be able to update at least once a week, we'll see. I'd like to move onto building a proper home soon; with that in mind, I've created an SSP world with the same seed, so I can scout out good locations for where I might like to end up. Hope this was OK!
Last edited: Aug 7, 2018
Reactions: LordPINE, Pyure and MrMonsterGuy18

(Posting so that I will get notifications for this)
Reactions: adamich
A

(Will watch this thread)

I must say, I love your writing style. It's really cool, and it fits the theme of the pack perfectly. I'm excited to see more of this.

EDIT: Link to the pack for anyone interested is in my signature on the forums.
And a bit of inspiration for @GamerwithnoGame : https://imgur.com/a/ukLQe#C4Wdrco
Last edited: Aug 7, 2018
Reactions: GamerwithnoGame

MrMonsterGuy18 said:
(Posting so that I will get notifications for this)
Click to expand...

adamich said:
(Will watch this thread)
Click to expand...

Ah thank you! Didn’t know that was a thing
Reactions: LordPINE and grandrolf
A

My riverside retreat is a peaceful place, thankfully. The efforts of my labours lay in front, including the little oven for my witchy plans, and next to that the table crafted from the crystals I'd mined. I don't yet know what I can do with it... perhaps I'll find out more, in time. 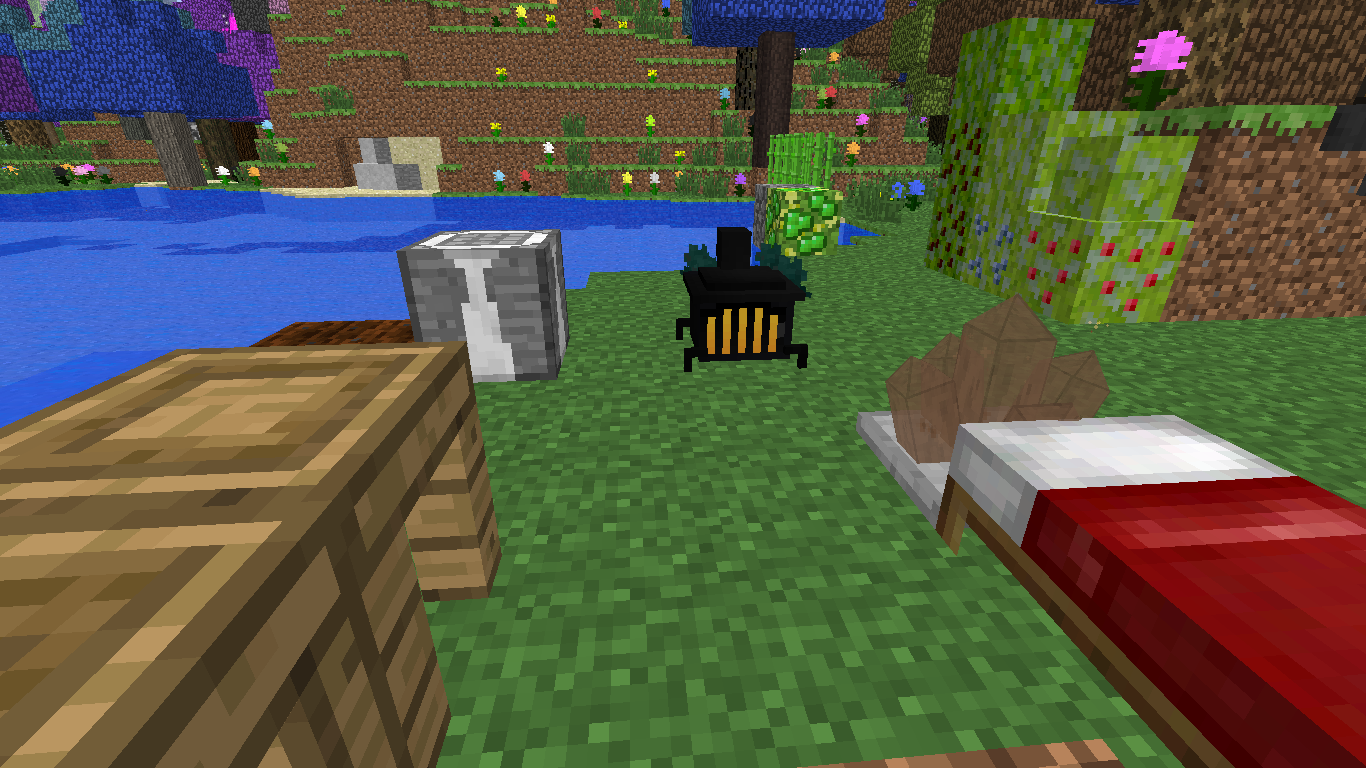 A crystal mounted into a block was one of my rewards from uncovering a strange construction; under the ground, but just beneath the surface. It seemed to be impossible to simply break into, but I found my way in through an opening, and made my way inside. Chests surrounded by some sort of field of force hinted at tantalisingly close yet unreachable treasures. And then I spotted it - some of the dark stone making up its bulk appeared damaged, and on application of my pickaxe gave way to reveal another chamber underneath. A peculiar glowing light in the centre lit its interior, and once broken, the previously impervious stone became compliant to my attempts at destruction... and the chests could be opened. I ransacked what I could, including the aforementioned mounted crystal, and made my way home.
----------

Furthering delving into witchcraft, I created a paste from some of the peculiar seeds I had found and grown, and applied it to a cauldron in the hope of forming it into something more suitable for my purposes - to my joy, the metal reformed under my hands into a more aesthetically and magically pleasing shape. I also discovered that an ore, found deep underwater, was resistant to melting in my previously effective smeltery. This would not do. A machine - similarly designed, but built to allow application of extra heat, might serve the purpose I needed... 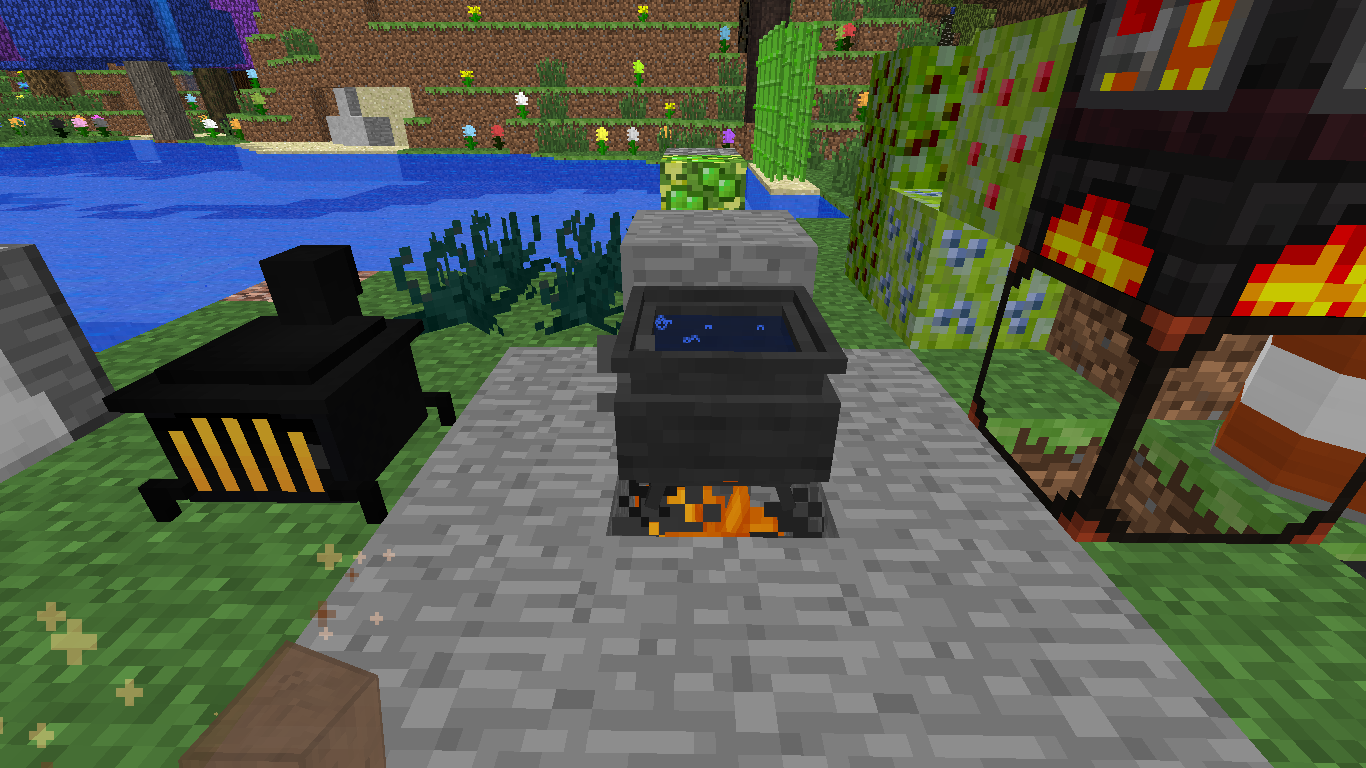 With my newly created pot for creating new and exotic reagents, and inspired by the mutability imparted by the paste, I created a substance that seemed to alter plants wholesale when applied. This was perfect, when combined with simple broken stone materials, to construct the ideal tool for truly unlocking the magic behind flora - forming sets of coloured petals into entirely new flowers just by adding them with water and seeds. Two pristine white flowers, capable of purifying and infusing even dead stone and wood into a newly living form, were the result of those efforts.

Trips down to the very deepest depths of this world, as well as through a swirling purple portal into a hellish plane, bore fruit - as both my knowledge expanded, and piles of brightly glowing dust were obtained from breaking some of the luminescent stone that seemed to be prevalent there. I'm sure those could be used to help me filter and capture more of the natural essences from the trees I burn...

Light, and colour seemed to be all around this place. There were even pools of bright liquid, which I was able to capture in a bucket. I could almost imagine odd symbols skittering across its radiant surface... if those are more than simply a trick of the light, perhaps it could be recorded in some way, maybe even on a book left close by? 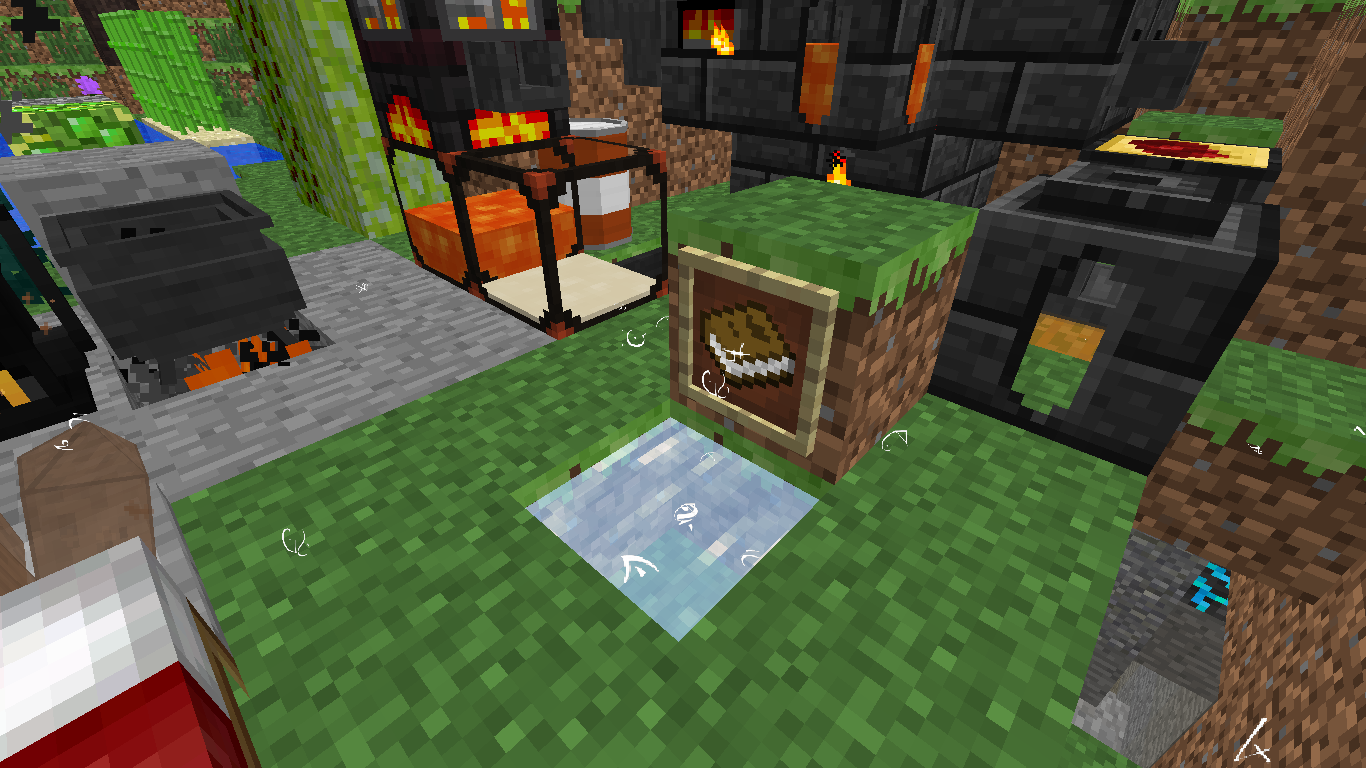 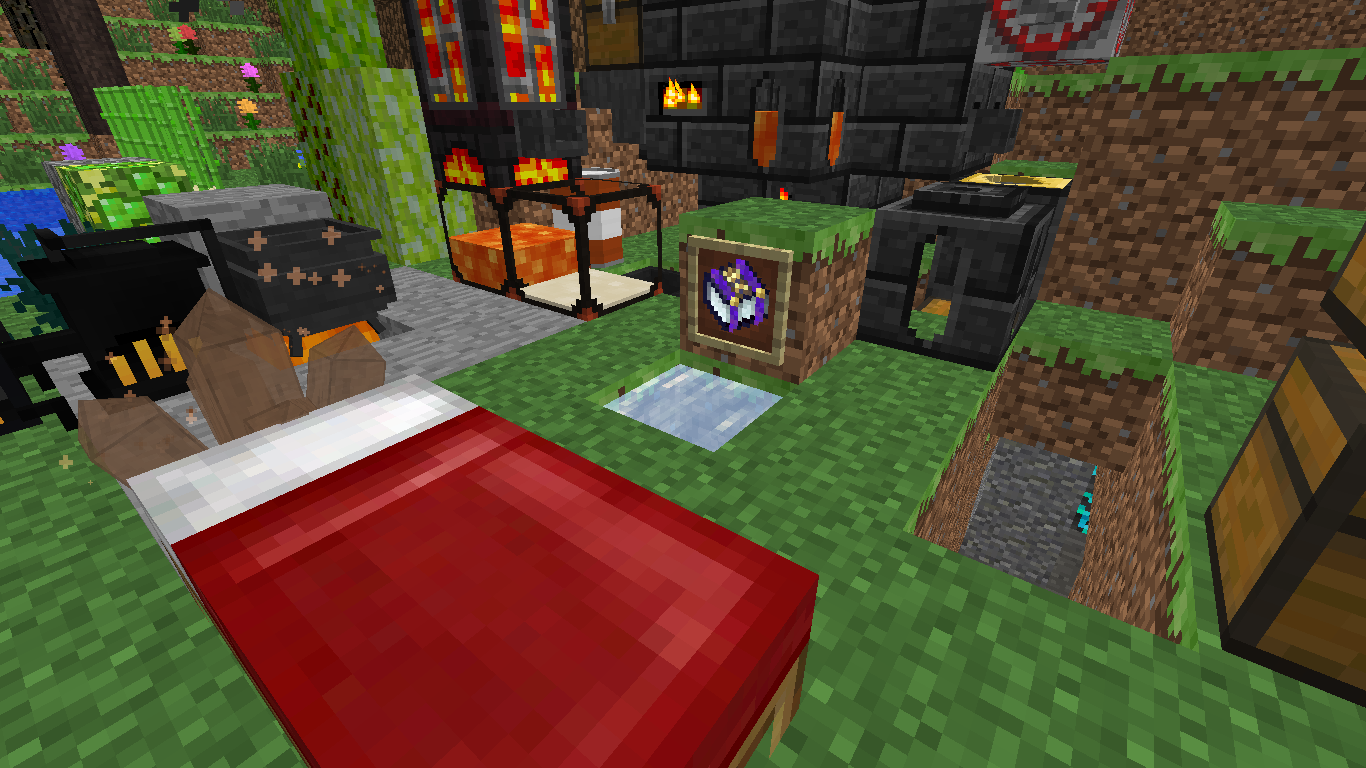 ...success! Now to find out what arcane secrets lie within...
Reactions: Tianyulong and LordPINE

I won’t be continuing this thread, apologies all.

GamerwithnoGame said:
I won’t be continuing this thread, apologies all.
Click to expand...

I wish I hadn't got so grumpy, and had continued this - I did quite well with my story, reading back! Ah well.

Considering we are planning to do another playthrough, you could try again? Reading more about your adventures in my pack would be awesome!
Reactions: GamerwithnoGame
G

Well, thanks for the encouragement I think I will - once I start playing the pack again soon, I'll try and continue this thread
Reactions: LordPINE

And then I didn't, unfortunately It was a fun playthrough though.

Hmm perhaps I'll do a new thread at some point.

GamerwithnoGame said:
And then I didn't, unfortunately It was a fun playthrough though.

Hmm perhaps I'll do a new thread at some point.
Click to expand...

I would love that!
Reactions: GamerwithnoGame

Tianyulong said:
I would love that!
Click to expand...