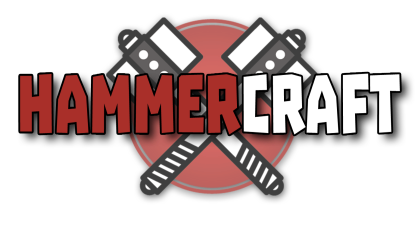 The Hammer Gaming community started out as a small group of friends who played World of Warcraft and over the years has grown into a large group of friends who span many games. We value the person more than the miner, meaning that you should be personable and fun to play with. If you are a great builder or amazing engineer but are no fun to be around, then we are not the server for you. However, we expect our members to know how to help themselves when it comes to learning the game and mods, the moderators are here to help but not hold people's hands.

HammerCraft has been in operation for over 5 years. \o/ Here's an album of some past work on the server.

Map:
A dynmap of the overworld is available here. Note that the black squares on the dynmap are just limited to the dynmap itself, the world is completly fine.

World:
The overworld is pregenerated with a radius of 5000 blocks around spawn, with a world border set to said radius. The current world has been generated at 21st February 2015.

Chat:
The ingame chat is linked to our IRC channel at #Hammercraft on esper.net. You can access it with this web portal or an IRC client of your choice.
We also own a Teamspeak server.

First Join:
On first join you are a guest and do not have build powers. You can wander around and see if you like the server. If you want to quickly get away from spawn, there are teleporters there which teleport you 3000 blocks in any cardinal direction. Once you have found a place you would like to live at, chat "Watchful1, Dreggor, OxidizedPickle" or any of the moderators listed below, and one of us will be notified on IRC and promote you.

Rules:
Blocked Items:
Currently there are no items blocked on the server.

Forums:
Once you are on the server, you can also join the forums to keep up to date with news.