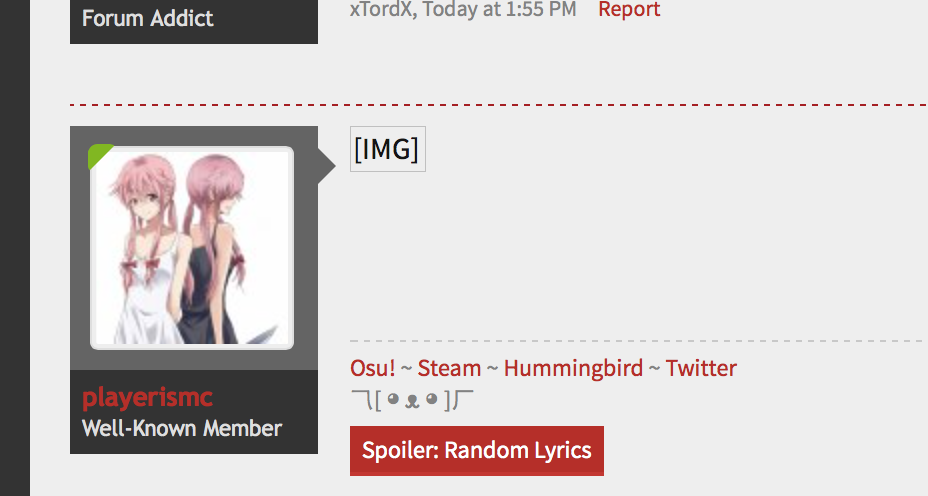 Although when I right-click and go to the "Open image in new tab" option, it shows a blank page... so is there even an image to start with?
P

its a browser thing,with chromium its also like there is notning

with firefox you also see a broken image icon thing, with chromium however you don't see the fact that there is supposed to be an image there and it would thus surprise me if chrome would do it.
Guess I found another reason to choose firefox over chrome, just too bad that it becomes worse every update
S

and I use debian 8 as my experiences with windows 8 where bad. My experience with ubuntu where also not the greatest (no touchpad, drivers suck but for some reason not in debian and some other things).

The only thing that bugs me right now is skype as that is just so old since last update, it even has the skype api still build in it for some reason and that was removed in 2013 >_>

All I can say is... you have weird computer problems.

The trip to get Linux to work on my laptop was long and a little bit painful I must confess but so worth it.
Mate just looks awesome, except that some programs react stupid to my touchpad I find it now that I am used to it better then on windows, as when I wanted to drag on windows I had to use 2 fingers while now I can just use one for example.

And the skype thing is just microsoft not giving a crap about Linux for example a post about the picture sharing thing said that they wanted to bring it to all their platforms and then a lists of OSes and stuff, Linux was not included.......

and before someone says that Linux is obviously not supported anymore: then why if I go to the download site I immediately get the Linux download.

I noticed that the Skype client for Linux is a bit different from the Windows/Mac client... I like it better, actually. The Linux client, I mean.
S

*backs away slowly from computer talk*

also @Someone Else 37 the interface is better, but picture sharing is stupid, instead of seeing a small picture like windows which you can download, I see a pretty big amount of text with a link to api.skype.something/something which then firsts wants me to sign in and after that I get redirected to the page with the picture which takes an awful long time to load properly sometimes >_<
and then there is the fact that some letters don't fit correctly for some reason if its in the last message one particularly annoying one is the "j" as it will look like an i >_<
You must log in or register to reply here.
Share:
Facebook Twitter Reddit Pinterest Tumblr WhatsApp Email Share Link
Top Bottom