Hey guys! I am working on an automatic treefarm, but I want to know which one is the "best" with little maintinence. I'm pretty new into the world but I got a decent power supply at the moment.
J

Would it be the Steve's Cart route, or the forestry route, or maybe something entirely different? A red power frames+blockbreaker? Also could you post a tutorial also?
S

Turtles. Find a decent program, grab some Redwood saplings, and you're set. Low fuel and maintenance cost as well.
M

MFR by large margin. Currently the most unbalanced thing in the packs.
J

Moasseman said:
MFR by large margin. Currently the most unbalanced thing in the packs.
Click to expand...

What is MFR? I'm horrible with abbreviations.
M

Jemjem787 said:
What is MFR? I'm horrible with abbreviations.
Click to expand...

Jemjem787 said:
What is MFR? I'm horrible with abbreviations.
Click to expand...

Is there some sort of video or tutorial i could follow for MFR? I don't know a lot about most of the mods, I'm relativly new to the modpack.
F


OR the wonderfully confusing verbal fuzzy spewage as follows.

First get some cows.
Put them in a pen.
Make a sewer and put it in center of pen. (3x3 size pen if ya like, 1 sewer has a 3x3 area for collecting ... stuff) no power needed.
Run some water proof pipe from the sewer to a composter.

The composter makes fertilizer but requires sewage and mj.
Use item pipe from composter to a block called a fertilizer.

Now need a harvester. Put that just off the dirt aimed at the center of the 3x3 of dirt. It needs mj and you'll want an item pipe from it to collect your saplings, wood, and 'apple, rubber, etc...' whatever extra that type of tree produces. I like deep storage from mfr to store the stuff you get.

Now almost ready. Make a planter. Put it under the 3x3 of dirt at the center. It needs mj and fill it with saplings.

Play around with your item loops and such. Using diamond pipes you can tell the item stream from the harvester to send some of the saplings back to the planter to automate it.

Providing power. If you wanna make it totally self sufficient you can take the wood produced and use a sawmill from Thermal Expansion to get 6 planks and some sawdust. Do what ya want with the sawdust, but I usually run the planks over to some cheap stirling engines or hobby engines. There's your power and basically you now have a tree farm that'll produce tons of wood, saplings, apples(rubber, etc...) for you.

As of 1.5.2 though the thermal expansion has a bug that makes it only give you 4 planks. So may as well have a furnace and burn wood to get charcoal at that point until it's fixed. But for 1.4.7 you're golden.

You can make 'upgrades' for cheap for the MFR stuff that can make your farm bigger. Last one I did was 9x9 and used three tin upgrades in the fertilizer, planter, and the harvester.

If you wanna use the sludge the harvester collects you can even make a sludge boiler and get things like sand, dirt, heat sand, soul sand, tainted dirt, clay, and peat. But ... it's really meh and not necessary. I did it on mine to get some soul sand but shortly just went to the nether and got loads. So, it's not even needed and probably not all that worth it to do. The harvester doesn't care if it's full on sludge, it doesn't stop working and doesn't slow down.

There are also videos, but that's the basic setup and the videos will show ya where to place stuff and such.

That all being said...

I use a peat bog and a custom turtle program to collect it all for me. One diamond, One redstone, and the rest is just dirt cheap stuff and brainz. Peat engines only need copper ... and I had spawned in an area so ugly rich with copper I was like, "Time for peat".
M

Not really, there's some flaws of balance in every mod, but not a single one is as horribly overpowered as MFR currently is.
R

Moasseman said:
Not really, there's some flaws of balance in every mod, but not a single one is as horribly overpowered as MFR currently is.
Click to expand...

Explain what you mean because OP means nothing. Outlandish Potassium? Overt Porcupine? I'm going with Owl Posterior.

RedBoss said:
Explain what you mean because OP means nothing. Outlandish Potassium? Overt Porcupine? I'm going with Owl Posterior.

I never said anything about OP, maybe you should read through the message again =/
Reactions: JPandaGamer
J

I will look up MFR, the only mods I know really well are Industrialcraft, buildcraft, red power, mystcraft, and gregtech.
N 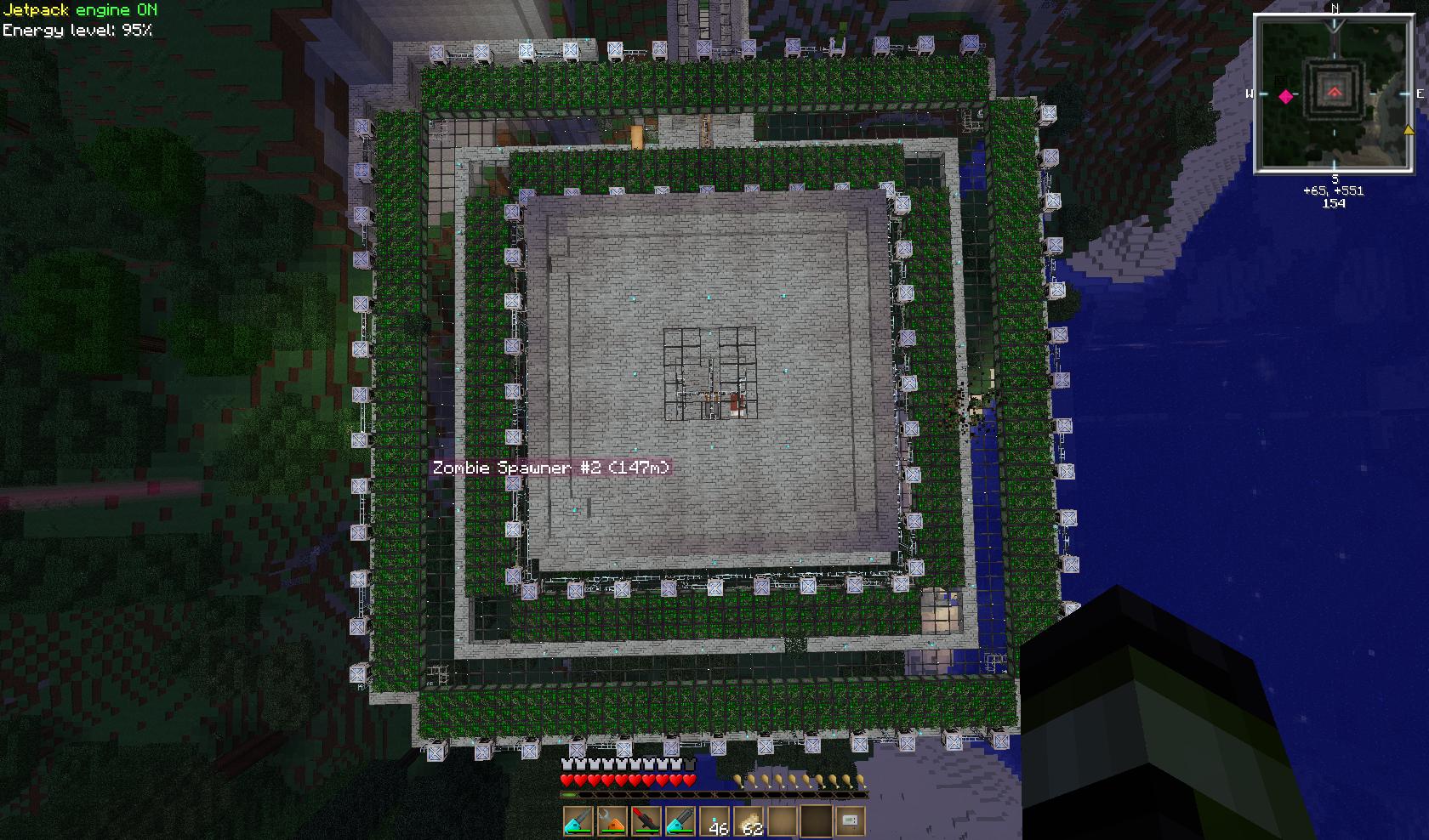 This is my extremely large MFR farm. They are a bit energy heavy, so be prepared to power it well. I run something like 40 generators off the wood, and have three gas turbines running continuously off the methane from the rubber wood and it's barely enough. I have to tap into my base's main power supply to keep this thing running.

I don't have fertilizers though, those make trees grow instantly. But with this volume of trees, it's about equal and it looks cool cause it's floating in the sky, heh.
M

Mind PMing me your world download nami? I won't be able to understand your farm without looking at it.
N

I use Xycraft soil. It's just a bit of a boost, though I also read that each subsequent block of Xycraft soil, planar to one another offers exponential returns. I'd say about 5 trees pop every second.

I am not too concerned with increasing the rates. If I can't consume all the biomass I am producing, then there is no point. I have calculated in terms of machinery, what I need to run the 32 magma crucibles I am planning on going for, but was unsure as to how much biomass "stuff" (i.e. plantballs, saplings, etc.) it could produce. The AE system is filling up quite quickly, so I might have to end up bottling some of the excess.

I'll have to add additional machinery to purge the excess and find a way to deal with it. I have no way of actually using the excess biofuel, if it exists. (which is probably does. I haven't run an apple juice cycle and that happens every two million mB of apple juice. I also have a couple thousand of them in my AE system so.... It's also 1.5x the production rate).

Jemjem787 said:
Mind PMing me your world download nami? I won't be able to understand your farm without looking at it.
Click to expand...

This will explain it fully. It's just modules of that idea situated around a square, then optimized for my purposes.
J

Thanks nami, I will check that out.
Reactions: XFXXFX

One detail with MFR that sometimes isn't very clear when the mod is mentioned, is that you don't have to use fertilizer for tree farms.

Using silver upgrades for the planter and harvester (the tree farm then ends up 15 by 15 blocks), you get enough logs to power five max size HP boilers, by turning the logs to charcoal. Without fertilizer.

Is it balanced? The definition of unbalanced for me is when something only has a short term appeal, and then essentially lessens or even ruins the game. That's certainly not the case with MFR in my opinion. Most people I know are quite comfortable with NOT having to craft a ton of blocks, or having to put down ~50 diamonds, for an automated and maintenance free tree farm.

I honestly think that the "problem" seen by some in this area, is the fact that other solutions have nerfed themselves out of relevance, for no apparent reason.
H