That mode has been missing for quite awhile, will double check configs, but been a missing feature unfortunately at this point
R

Alright so before anyone points anything out, I know I am not the best at building good looking buildings, but these two towers I am pretty proud of took me a lot of work. I only built one used the builder for the second. I did build the bridge by hand too, also I do not have a flying ability yet so that also contributed to my time (I also am lame at this stuff so I couldn't figure out many things). The tower on left is going to be for Ars Magica and one on right for Thaumcraft. I am just starting all magic mods now so I made sure to have plenty of room. 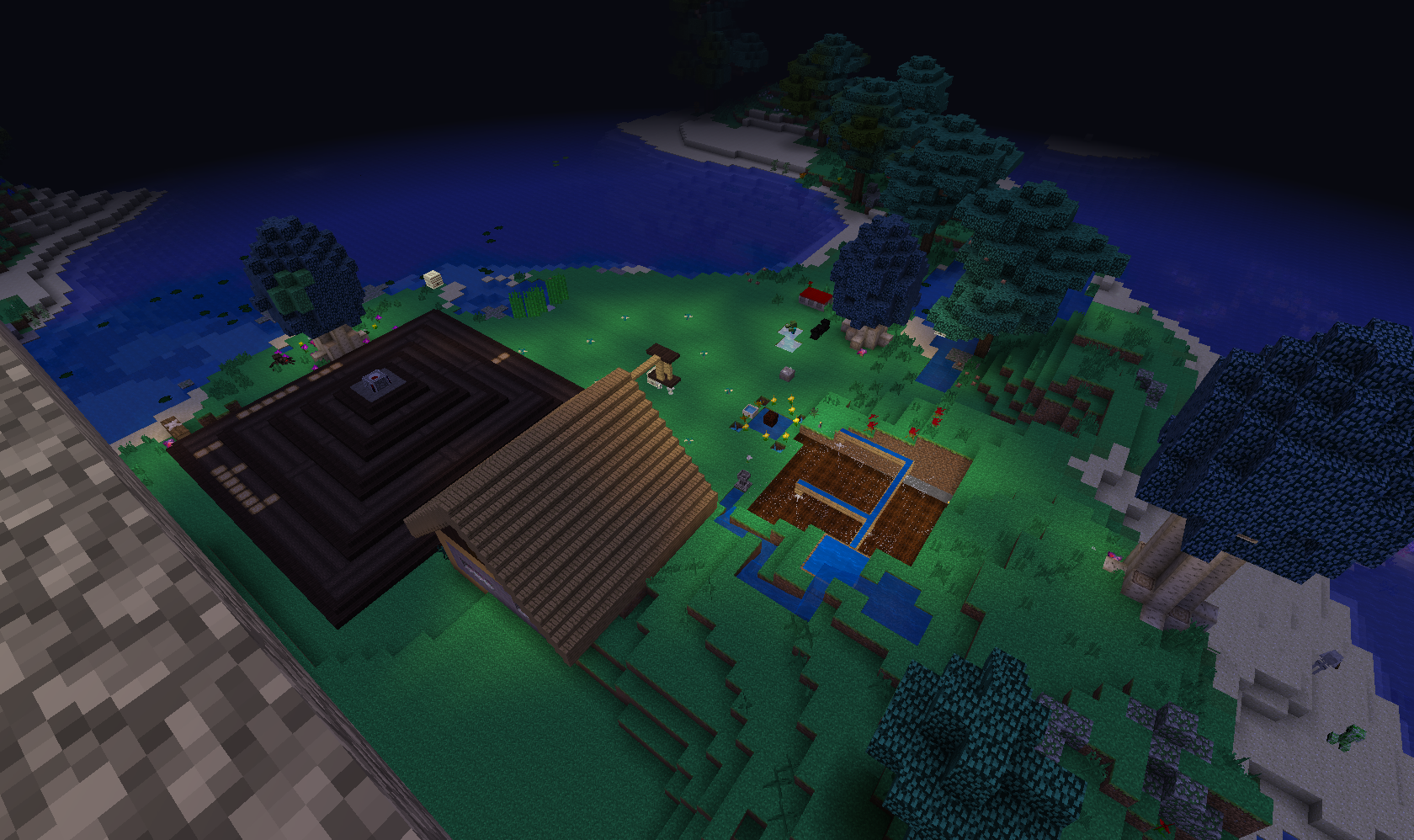 Looking Down at my little cottage (Tech in basement). 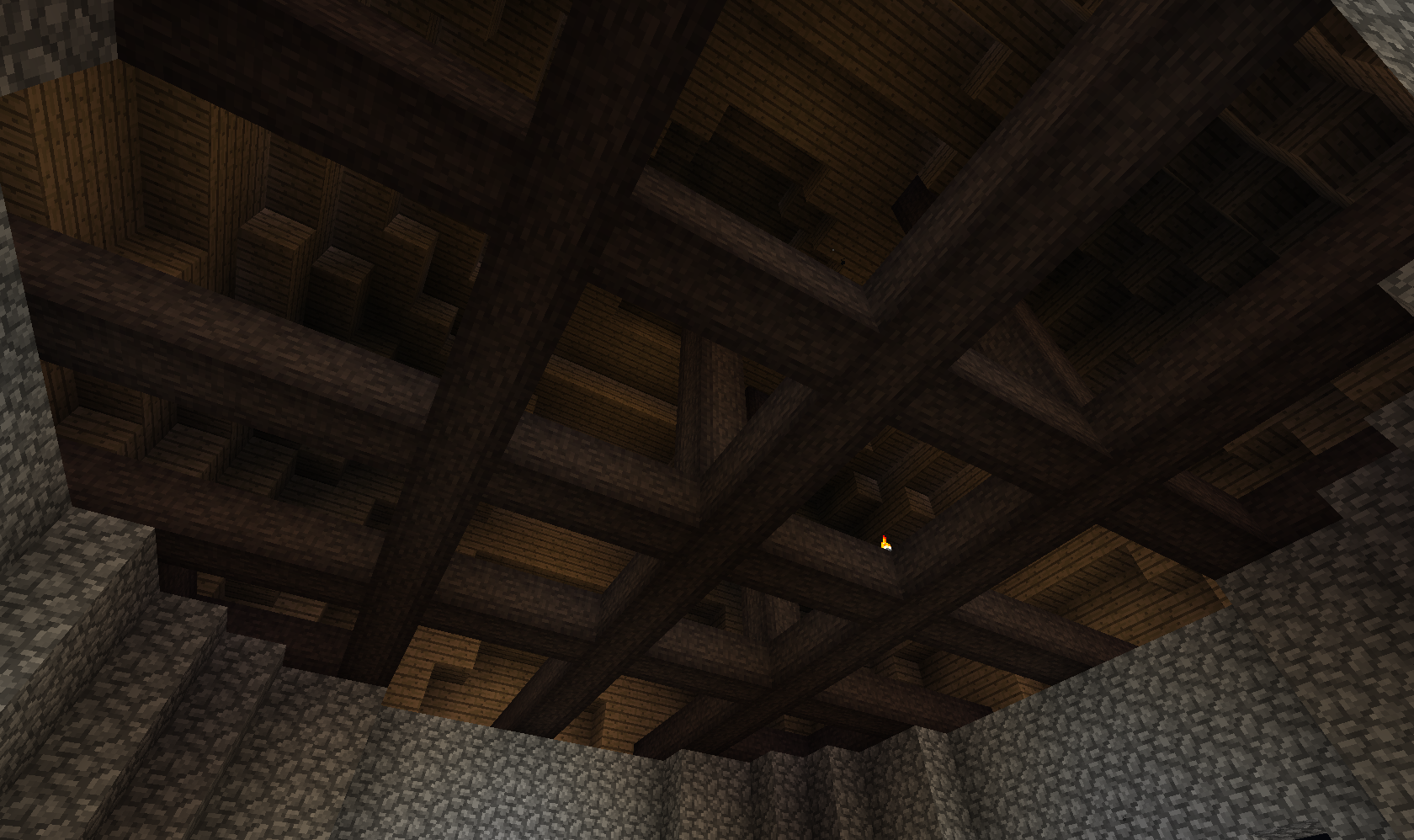 What I could come up with for rafters. 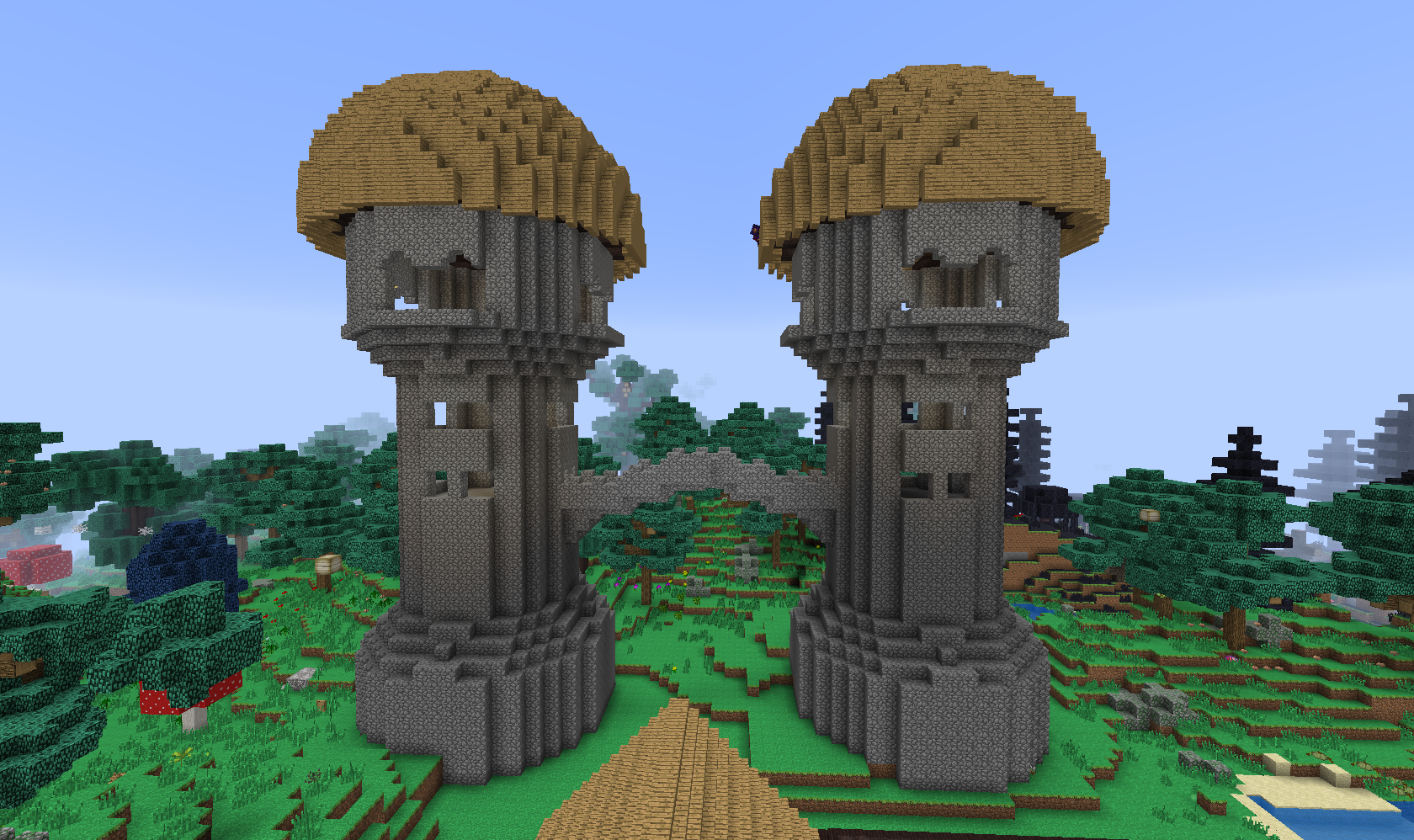 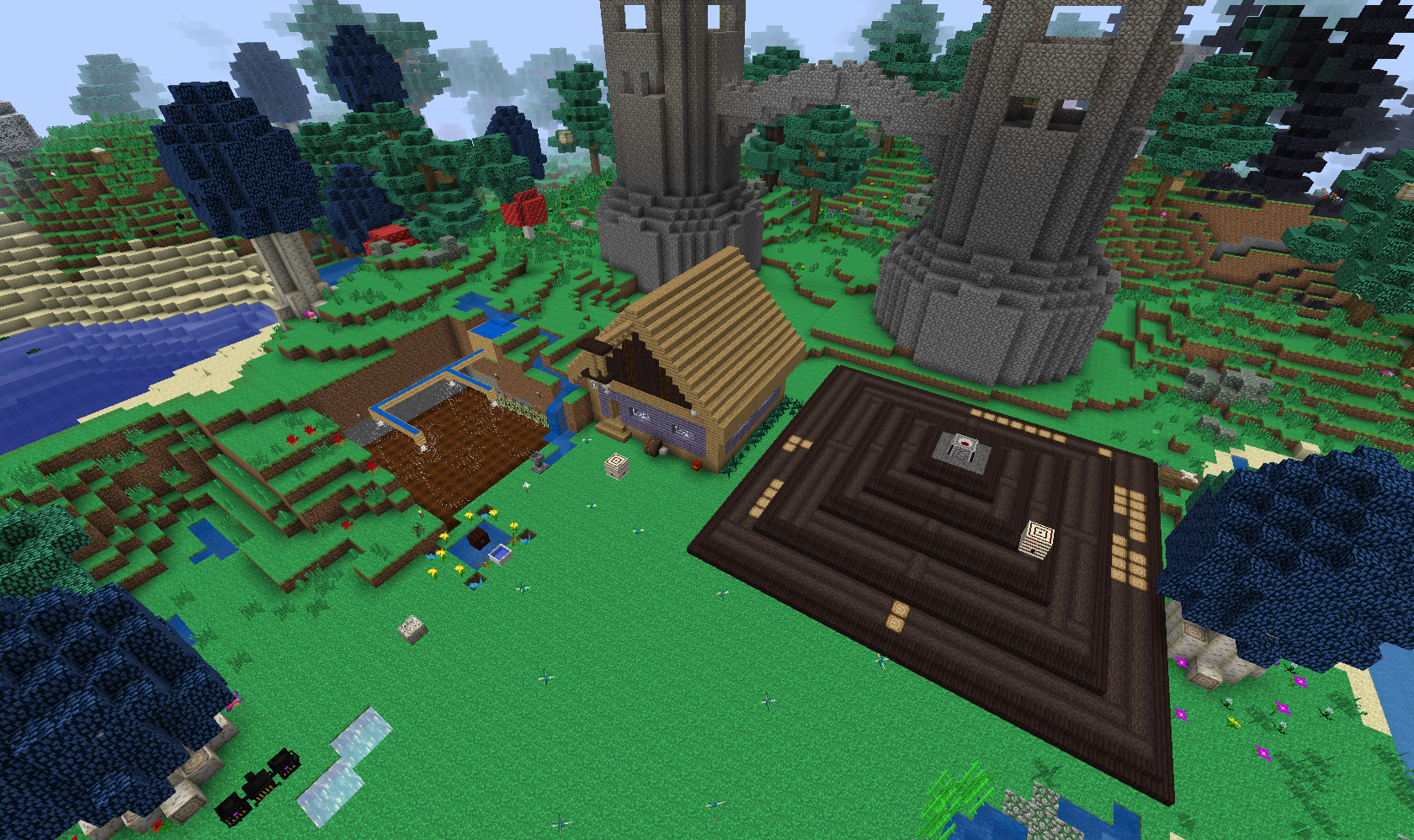 Front view of what is my place.
I wanna make note, this is my first attempt at something other than a box..

I think it looks really good

On a side note: Uploaded an update to the default map, no changes other than the folder structure as I apparently archived it wrong so this will only affect those who need to download the map, but could not figure out how to extract it...
A

Hi, I'm stuck on the quest with Ephelba. I've done the other quests in that line and killed the coven witches. I've found her cave, but something isn't triggering correctly and I am unable to attack her and she isn't attacking me so that I can't get her lockette and complete the quest. I've even tried using the op book to un-complete the quest in HQM to no avail.
Reactions: GreatOrator
G

Try talking to the dockworker if that happens....
A

GreatOrator said:
Try talking to the dockworker if that happens....
Click to expand...

I tried that. Her name changed from green to red when I get to her cave, but she still doesn't attack and I can't attack her. Right-clicking just gives the generic responses.
Reactions: GreatOrator
G

did you try talking to the captain again?
A

GreatOrator said:
did you try talking to the captain again?
Click to expand...

Yes I have
Reactions: GreatOrator
G

Then not sure what else to do here, the dockworker was put in place in the event that your faction with villains got messed up and you are saying neither he nor the captain are working. Tried to recreate this scenario in my test world and was able to get it fixed with the suggestions I have given, hopefully someone else has something to offer.
A

GreatOrator said:
Then not sure what else to do here, the dockworker was put in place in the event that your faction with villains got messed up and you are saying neither he nor the captain are working. Tried to recreate this scenario in my test world and was able to get it fixed with the suggestions I have given, hopefully someone else has something to offer.
Click to expand...

Here's what I did:

1. Talk to the dockhand to make the bosses dangerous.
2. Went back to Xavious and went through the Ephelba dialogue
3. Went straight to Ephelba's cave. 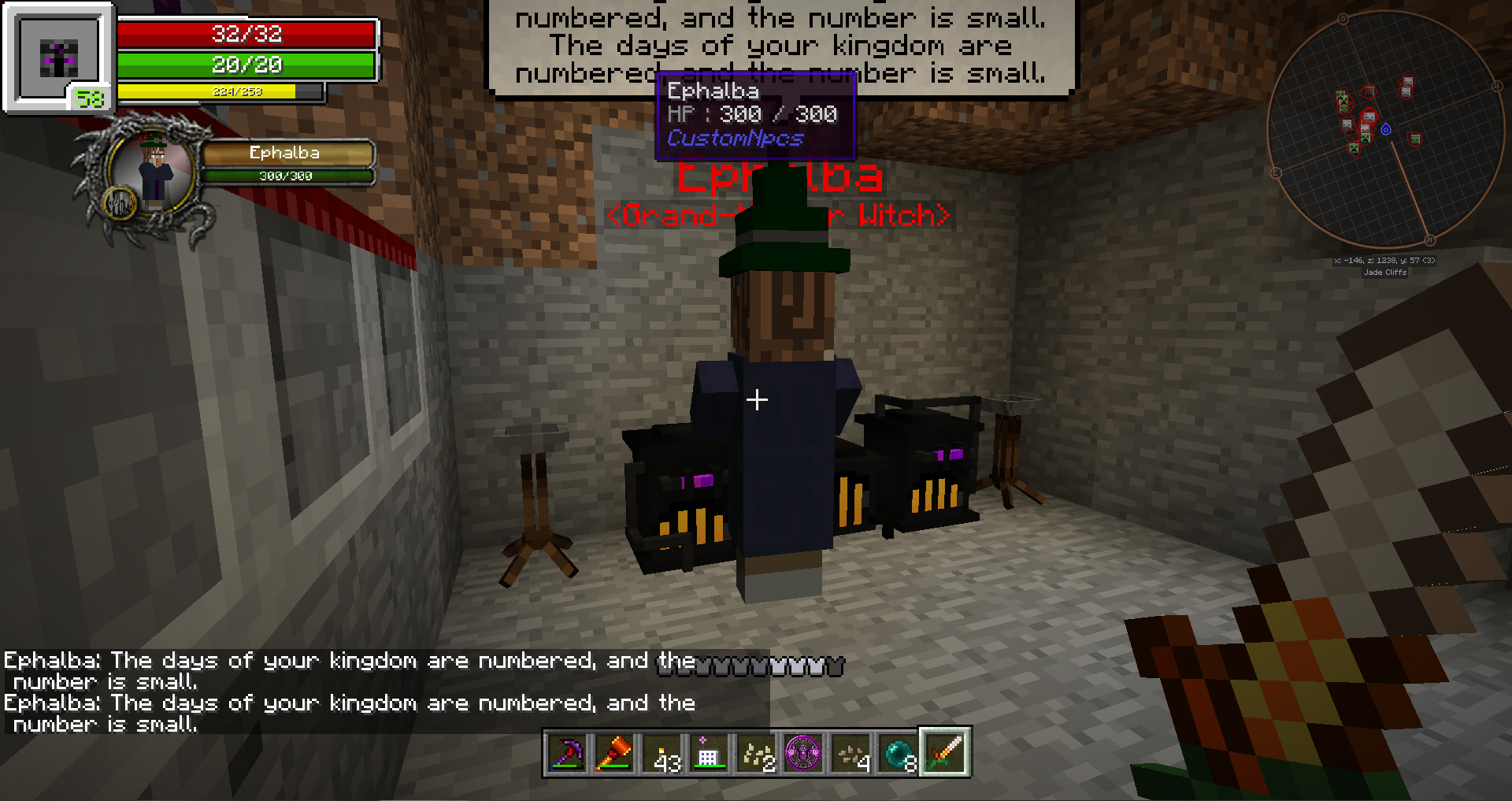 Is there a way to force complete this quest?
Reactions: GreatOrator
G

When you talk to xavious, make sure he is changing your faction (should show up in the dialog) also, if this is a server, make sure command blocks are enabled
A

GreatOrator said:
When you talk to xavious, make sure he is changing your faction (should show up in the dialog) also, if this is a server, make sure command blocks are enabled
Click to expand...

That was the problem, I didn't have command blocks enabled on my server.
Reactions: GreatOrator
L 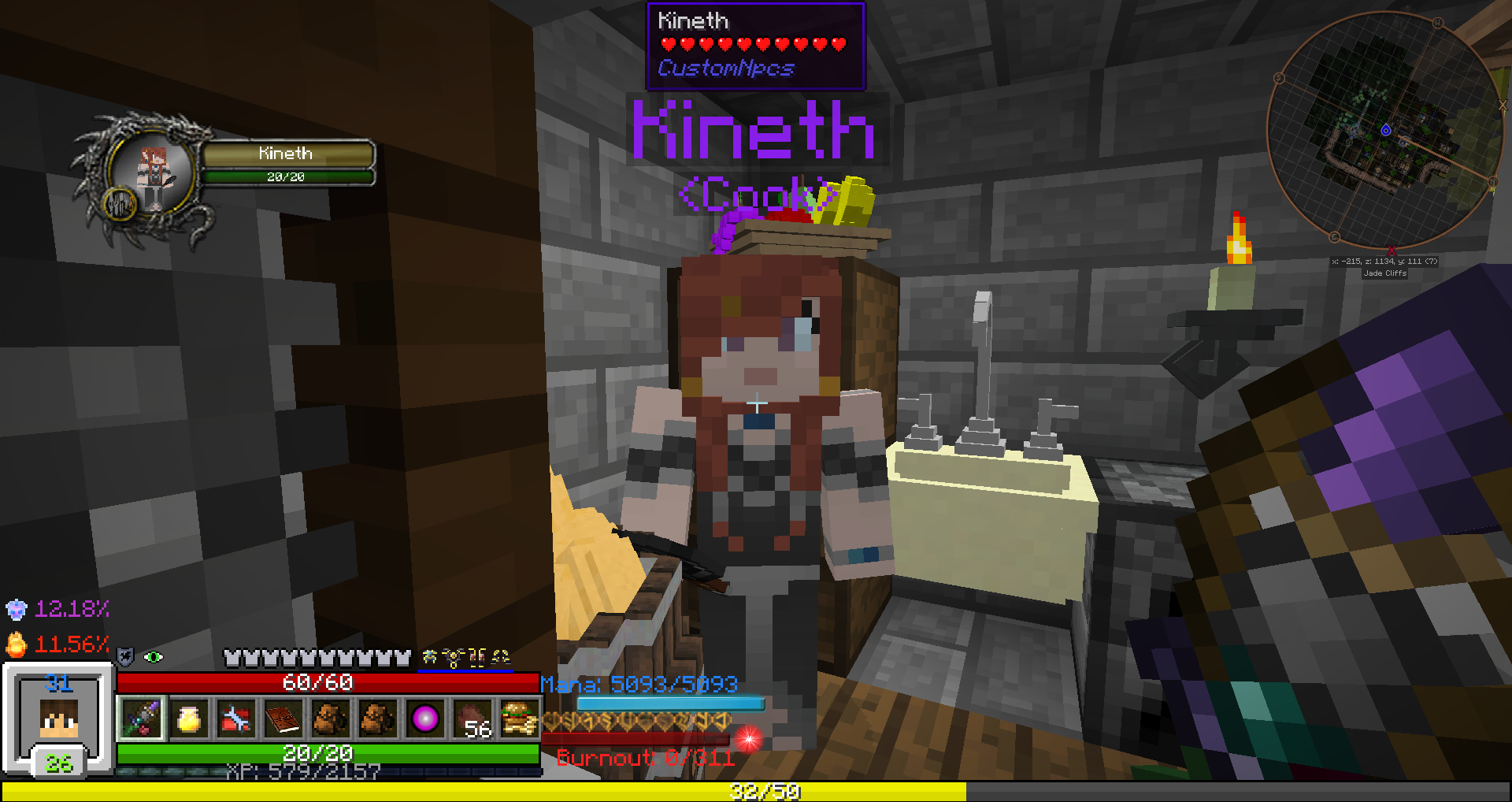 Maybe i have a old or different map, but this is the person i spoke to to reset my villain faction rep. She's up the stairs to the left of the dead queens locked room. 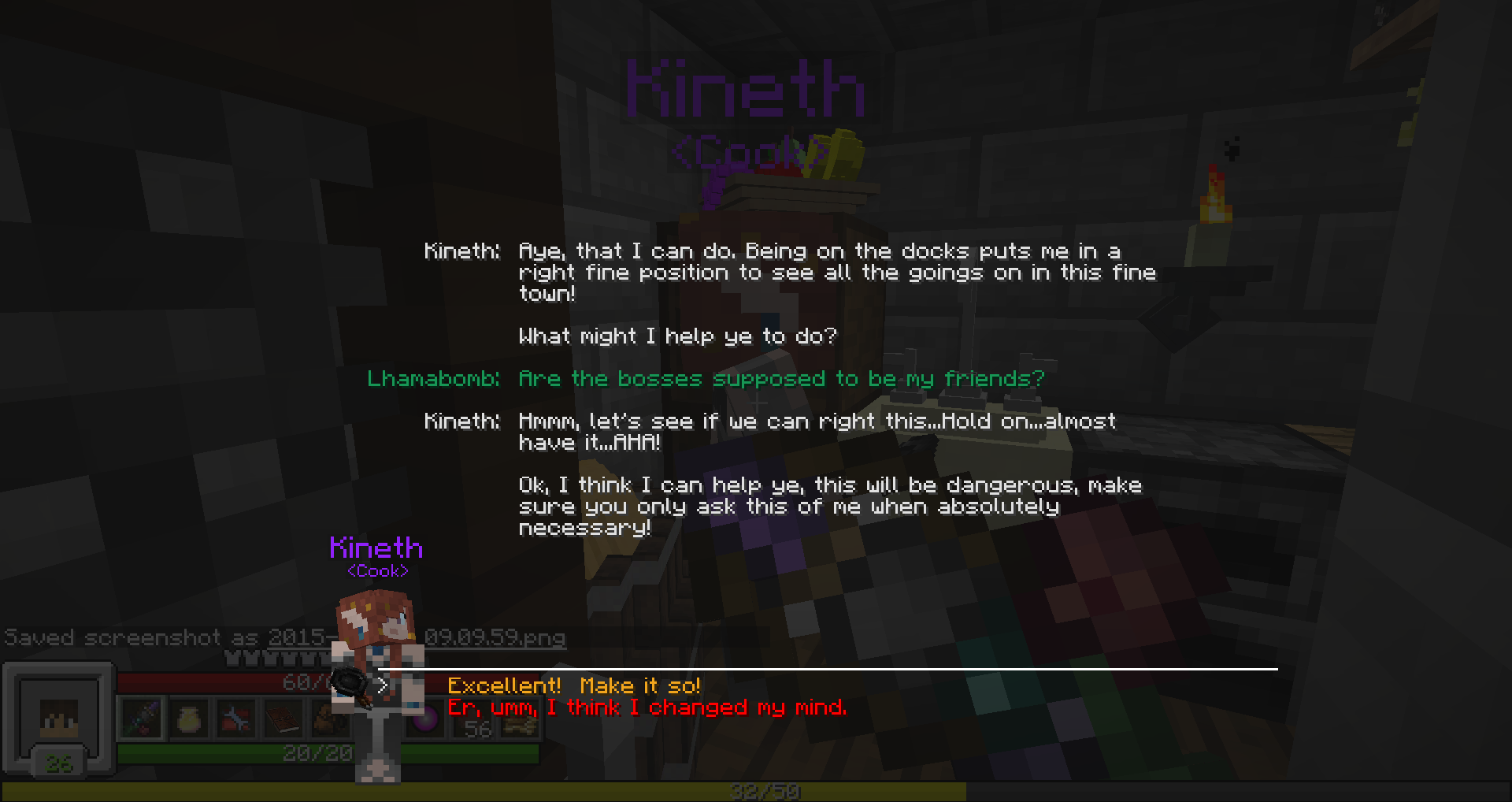 Apparently she has spontaneously decided to take on new role That's what I call taking initiative!
Reactions: ZephyrWindSpirit and Lhamabomb
M

So I'm not sure if you can help with this. My brother and I have been playing this map for quite a while, through many many pack updates. Recently we have finally crafted Ichor for the first time. I had also gone into a previous version of the map in order to test something and the quest book was messed up after, but after I restarted minecraft it was fine. After that I started getting lag. It got worse and it was a few minutes of lag between when I did something on the server and when I get the effect of it. (such as open chest and be able to interact with it) My brother runs the server from his pc and I get on it over wireless. Tonight we tried again and it was still just as bad. I got the server on my PC and tried it, and it was better for me, but my brother had the same issue that I had had. Is there something in the newest update or something about the Ichor or test world that made this happen, we have had no issues in the past with this. I was able to play the map in single player with no issues. If you want any more information from me to help than I am glad to oblige. We really want to finally finish this map, and we are so close, but I cannot physically play with that lag.
Reactions: GreatOrator
G

Well, depending on where you live, the lag may not be the map, there are/have been serious issues with the internet on the west coast lately and it is affecting anything internet based. Other than that, not sure what would be causing the lag since the map the server is on is basically the map we started with which was from 2.3.x. I would say check the game logs to see if there is any indication of a memory leak.
B

Hi! I've got some questions. Yes, I did read the FAQ, which also got me confused a bit.

Me and my friend started playing this pack a week ago, we've got a nice big base in Middle-Earth, near the area where the big spinning ring puts you. The thing is, that there are no aggressive mobs spawning there and also the hobbits are really annoying walking and spawning into our base. I've got several questions about this:
I also have some questions about the quests, as I'm not sure if we're doing them as intended. The HQM quest book (kinda) works, not counting that I had to add it in manually because we did not spawn with it, and also the guy at spawn which would've turned on questing mode did not give any. I've also found out that if I press L you get another quest interface, which seems to be bugged out for me. It says that I should go to the king (which I did), I got a teleport crystal thing (I don't know its name), and then the quest disappeared. After a bit of playtime though, I opened it again and saw that I had the king-quest again, which got me another teleport crystal thing, and then also no quests. I did not go back there again, but if I open my quests page, it says that I have that quest - again. I assume that there would be other quests after the king's, but actually I'm not sure, that's why I'm asking here.

Just another small question: I'd really like to get into Applied Energystics, but it seems like that because of there are no real technical mods, like Ender IO or Big Reactors (I'm not complaining, just stating the facts), I really have no idea what I could do to build a good energy source, which is really easily maintainable, or even better, infinite.

Other than that, I'm really enjoying the pack right now, and so is my friend! We're looking forward to the boss fight with Sauron (if there's any. I'm not actually sure, just hoping that there would be.)
Reactions: GreatOrator
G

Well, short answer, is yes, these questions have been raised and answered multiple times. Basically the faq is saying, if there is a map update and you build in pregenned areas, you will lose your stuff.

The shire does not spawn hostile mobs, that is by design of the mod. There are plenty of ways to have self-sustaining power, rather easy really. I would just point to youtube as there are several players who have examples of such
Z

Solar generators, potion generators. Lava generators. Extra utilities is relatively infinite power if you make it right. Potion generators worked best with Brewcraft, but using Ancient warfare, and maybe... something else you can auto swiftness potions.
Reactions: GreatOrator
B

GreatOrator said:
These questions have been raised and answered multiple times.
Click to expand...

Thank you for the fast answer, but this really does not help. I mean, I completely understand that you as the developer of the modpack was here the whole time and answered every single question that was asked, but you can't seriously ask from a simple casual player to look through all 188 pages of this forum to find an answer to his questions. That's what the FAQ is for, so if these questions were really asked multiple times, then maybe you should put them in the FAQ. You answered two of my questions which I'm thankful for, but you did not mention anything about the quests which I'm having problems with or the hobbits' spawn rules.

I'm not trying to offend you and this was not a rant (although it might feel like it), so I'm sorry if I sounded rude.


GreatOrator said:
The shire does not spawn hostile mobs
Click to expand...

So is my only option to always go back to the overworld every time I have to kill mobs? I don't really know all mods in the pack, so I can't know for sure but maybe you know an easier method for it.
Reactions: GreatOrator
You must log in or register to reply here.
Share:
Facebook Twitter Reddit Pinterest Tumblr WhatsApp Email Share Link
Top Bottom